Last week, it was revealed that George Lopez would be making his return to TV with Lopez, a semi-autobiographical TV show in the vein of Curb Your Enthusiasm. After Seinfeld went off the air, Larry David, its lesser-known co-creator, began working on his own series. The resulting comedy aired on HBO and is best known for showing off David’s awkward personality. Oh, and for keeping one guy out of jail. In 2003, Juan Catalán was arrested on murder charges in connection with the death of 16-year-old Martha Puebla. He spent almost six months in jail, even though he had ticket stubs that placed him at a Dodgers game that same night. Police insisted he was actually 20 miles north of the stadium, CBS News reported.

Catalán’s defense attorney, Todd Melnik, tried to prove his alibi was airtight by looking through the Dodgers and Fox Networks footage from the game. Basically, it was a game of Where’s Waldo? with the highest stakes imaginable. The videos weren’t very helpful because Catalán couldn’t be made out. That might have been Melnik’s cue to explore other options, but an episode of Curb was filmed that night. When Melnik saw the time-stamped footage that showed Catalán sitting with his daughter, he was able to prove that Catalán couldn’t have committed the crime. There were other things – phone records, for example – that helped weaken the case against Catalán, but he probably became a fan of the show after it helped to definitively clear his name. 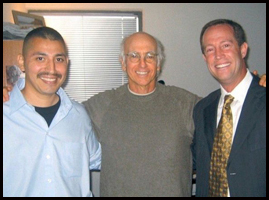