Several popular shoe brands, including Adidas and Nike, have designed new sneakers in celebration of this year’s Día de Muertos (Day of the Dead).

According to Sneaker News, Adidas’ new collection features two versions of its Hyperturf silhouette. One is inspired by the traditional Mexican dish known as mole, and the other is designed with pink sugar skulls in mind.

The mole sneakers are mostly brown and black with hints of pink, blue and yellow throughout the design. The pink sugar skulls are light pink and white. Mole and sugar skulls are items one would find on an altar (ofrenda) on Día de Muertos to remember loved ones who have died. Both designs include an embroidered butterfly icon on the heel of each shoe.

For the holiday, Nike created four different shoes for its “Somos Familia” Footwear Collection, which is based on some of its past silhouettes, including Nike Air Max 1, Nike Dunk High, Nike Air Force 1, and Air Jordan 1. Each shoe features colorful designs, patterns, and stitching. 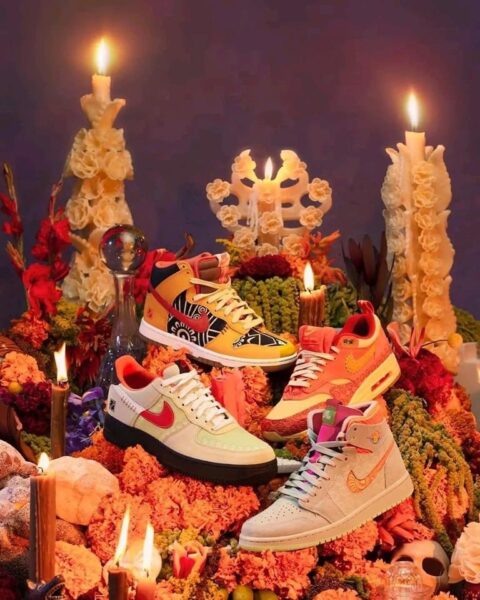 Along with Adidas and Nike, two other shoe brands that released Día de Muertos footwear include Converse and Vans. The Converse shoes feature skeletal designs inside the tongue of the shoe. One design has an image of a heart and skeletal hands on the outside.

The latest Vans have three different designs for Día de Muertos. All three are decorated with items like colorful sugar skulls and flowers and glow in the dark. The silhouettes that Vans used in its 2022 designs are SK8-Hi, Authentic, and Slip-On.

All the 2022 Día de Muertos sneakers for Adidas, Nike, Converse, and Vans are currently available for purchase online. What do you think?