2007 must have counted with some kind of enduring nightlife alchemy, because some heavy parties celebrated their decade mark in 2017. Downtown Los Angeles’ fka Mustache Mondays is on the tail end of its anniversary season (the party marked its moment by switching to Thursdays), Austin’s Peligrosa crew just rang in a decade, and now New York City’s D’Marquesina is also turning the big one-oh, returning to Puerto Rico for its annual NYE party to celebrate 10 years of joyfully eclectic dance floors.

How did D’Marquesina founders Héctor Arce-Espasas and Glorimarta Linares create such a clubland force? The night entered NYC’s consciousness in a moment when the city was begging for a throwback to the prepubescent days of parties in your friends’ parents’ garage — hence the event’s name. The party’s soundtrack mashes up salsa, pop, and merengue classics with the current sounds of reggaeton and Latin trap, making its continued relevance a testament to the enduring legend of the rec room, crowd pleaser DJ. Who’s trying to stay stoic when Los Horóscopos de Durango’s Cyndi Lauper remix, “Rica y Apretadita,” and Bad Bunny-Farruko trap bangers are coming out of the speakers? Answer; we don’t know her.

The DJs’ auditory appetites haven’t been afraid of putting sounds found further afield to work for the party, as anyone who remembers this unholy allegiance of El Guincho and Vanilla Ice or merengue “Vogue” edit that Glori and Héctor dropped a smooth seven years back can tell you.

D’Marquesina’s annual return to its founders’ Boricua roots for its NYE pari has become somewhat of a tradition, but nothing’s meant to last forever. Last year Glori hinted to PR newspaper El Nuevo Día that the bash ushering in 2018 might be the climax of the yearly tradition. No update on whether this is the last año nuevo D’Marquesina blowout in Puerto Rico, but if you’re anywhere near Santurce you should cover your bases by partying with Arce-Espasas and Linares pa cerrar 2k17 — not to mention a decade of dancing shameless enough to make your 13 year old self proud — con broche de oro.

For a taste of the vibe you can expect, check out the playlist Hector helped put together for us earlier this year. 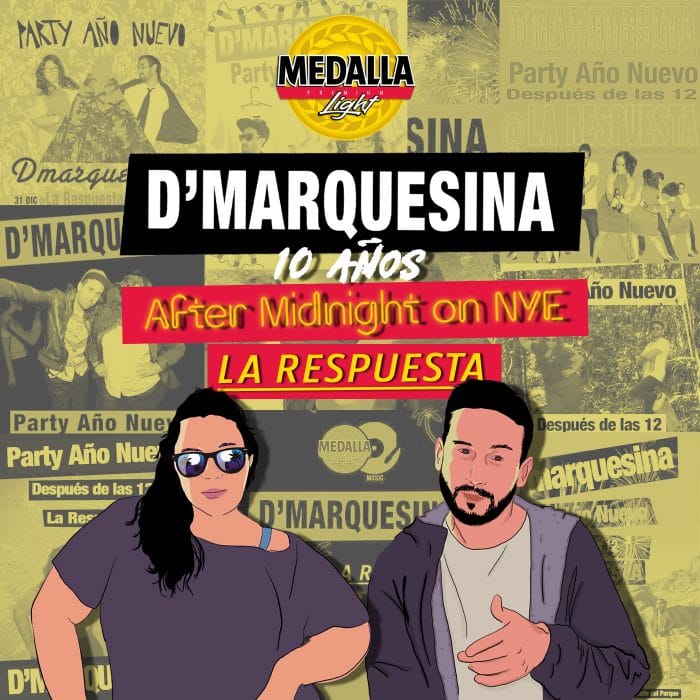