Graffiti and street art have not always been respected mediums. But now, it’s seen as trendy (ahem, all to all the graffiti tours taking place around the world) and a necessary form of expression. Beyond the Streets, a new Williamsburg exhibition curated by graffiti historian Roger Gastman, is paying tribute and celebrating “vandalism as contemporary art.” And with the help of Artnoir, this exhibition is also illustrating Latinx artists’ role in the street art movement. On Friday, July 19, Beyond the Streets and Artnoir will feature a panel titled Cultural Imprints, Latinx Impact & Universality in the Art Form of Writers.

“I am thrilled to be hosting Cultural Imprints: Latinx Impact and Universality with Artnoir at Beyond the Streets,” Gastman said in a statement. “Our goal is to educate and show diversity in the arts of mark making and rule breaking. By partnering with Artnoir, we’ve brought some of the most legitimate artists and curators from this culture together to share ideas and inspire.”

Moderated by Yasmin Ramirez, a research associate at the Centro de Estudios Puertoriqueños at Hunter College who has a Ph.D in art history, the discussion, part of Artnoir’s Summer Night series, will include insights from Jessi Diaz, Lee Quiñones, and José Parla.

The panel will give a variety of perspectives in the street art world. Diaz, for example, currently lives in New York, but grew up in California in the ’80s. Her art is shaped by her experiences as an immigrant woman of color. Parla, on the other hand, has worked as an artist for more than 20 years. He’s known for his installations based on large-scale paintings. And finally, Quiñones is recognized as one of the most influential artists from the New York City subway art movement. 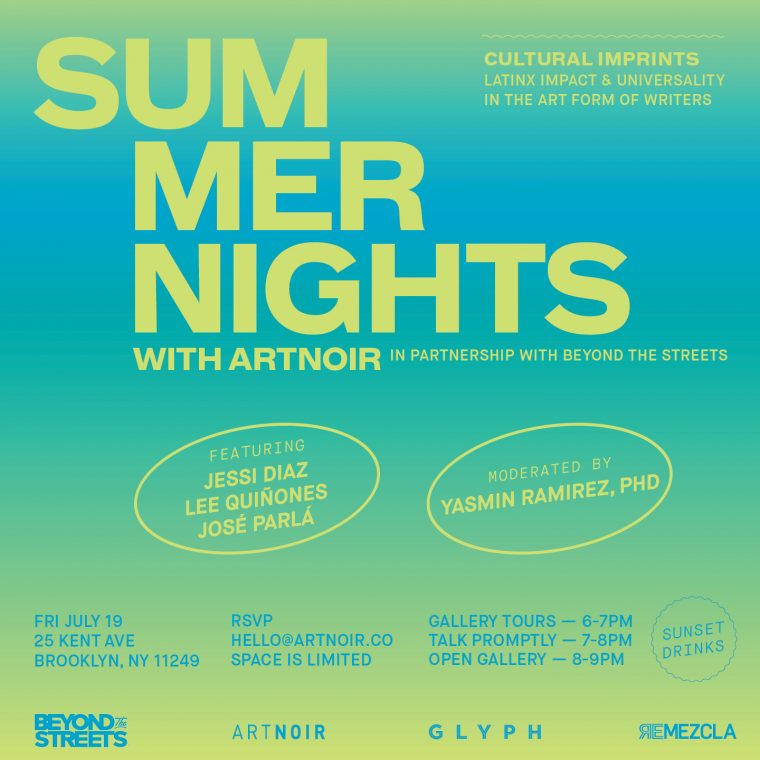 To attend the event, email hello@artnoir.co to RSVP.