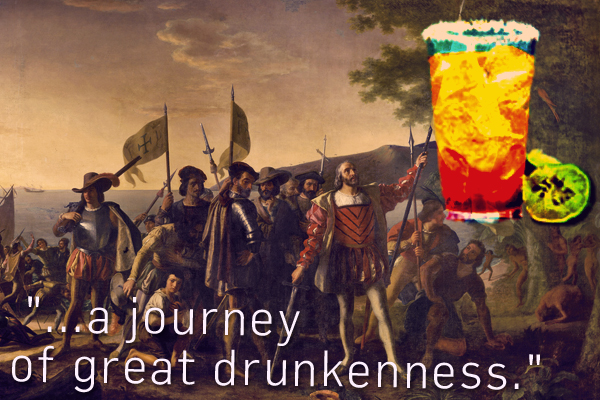 With The Spot finished, the staff at Remezcla is looking for a new reason to live. After thorough research into the state of the world and why we shouldn’t just put an end to it all, we’ve discovered that this Friday is International Beer Day. If there’s anything to pull us out of an emo rut, it’s beer -it even tastes like The Spot.

Now, we could’ve just popped open a Corona, tossed in a lime, and called it a day, but we’ve decided to aplicarnos and go one step further. This Friday, we’re going to celebrate beer, all beer, and a lot of beer – and Latin culture, of course – with crisp, cold, Tabasco- and tomato-infused micheladas.

And yet, it doesn’t feel like The Spot. We’re cold and clammy and are about to crawl into a closet and to listen to Sin Bandera. What’s wrong with us? What’s missing?

That’s why you are all invited…

Start off at Fatty Cue (91 South 6th Street) for the most adventurous stop on this drinking spree . The Malaysian Barbeque king has decided to dabble in Mexican cocktails, and we have to admit the result is not half bad. We wouldn’t have thought of putting fish sauce, pineapple juice, shallots, and garlic in our birra, but now that we’re drinking it, we’ve been converted.

For a michelada closer to home head to Cariño (82 S 4th Street). Expect pure Mexican bliss -and maybe even some clamato juice in your glass.

Mexico es grande for convincing the world to drink iced beer, and even the Venezuelans seem to be catching on.  Just a skip a hop and a jump from Cariño is Caracas (291 Grand Street), serving up a michelada more akin to papelon con limon than to -well- micheladas. They substitute the traditional lime juice for -gasp- lemon juice. As if that wasn’t blasphemy enough, they also season the cocktail with jalapeño infused panela. Ah, those Venezuelans… can’t handle their spicy, always going around making everything sweet… We wouldn’t even try it, but you know what they say: When in Caracas…. Hmm what do you know? That’s not half bad. Just one more sip. Well, maybe two. Better yet, just bring us each a pitcher; this drink is amazing.

Cubana Social (70 North 6th Street) serves up a classic twist on the classic drink: la michelada cubana. Not as daring as the Malaysian or Venezuelan takes, Cubana Social’s michelada consists of a Modelo Especial, lime juice and a well-guarded secret mix of spices.

For a Back-to-Basics michelada stumble on over to Mesa Coyoacan. A bit of a trek, but also a perfect opportunity to belt out the ____ (insert drunken music genre of your country, ex. cumbia, mariachi, tango, gaita) you would never admit to knowing but secretely love. Their michelada -if you can still speak clearly enough to order one at the bar- is simple, savory, and oh-so-comforting.

If the night is young, or you’re too young to care, head back to the L train because we hear tell there’s plenty of great michelada’s to be had in the LES….