By Richard Villegas
09.11.17 at 11:35 am
Lead Photo: Art by Buenos Aires artist Ever, photo courtesy of Living Walls website.

Over the past seven years, Atlanta’s annual street art conference Living Walls has become a powerful tool for public engagement in the city, reaching far beyond aesthetics, and often stimulating socio-political discourse. Headed up by Peru-native Monica Campana, the conference has contributed to the creation of over 100 thought-provoking mural works since its inception in 2009, inviting artists from across the country to conceive pieces that reflect on the unique identities of each ATL neighborhood. For its latest edition, the Living Walls Conference has decided to spotlight the experiences of women and LGBTQ people of color, and they will be making their message all the more powerful by bringing the conference to Buford Highway, home to Atlanta’s densest and most diverse immigrant community.

To continue creating public art for The BuHi Walk, click the link in our bio! ↗️ 🎏🏮"HERE TO STAY" (part 2 ) marks the first mural on BuHi, painted by @jessxsnow, assistants and youth from @cpacsorg "A mother gives birth to a daughter and carries her across the Pacific. From ash they alchemize a home. When the daughter grows up she must take care of the mother, the same way she must learn to nurture the communities her mother's generation built. Painting this mural felt like an offering of prayer for migrant mothers, Asia Plaza, Plaza Fiesta and all the immigrant communities along the Buford Highway as they stand against gentrification and resist assimilation on a daily basis."✨. 📸 @mattevans____ . . Thank you to everyone who made this possible!

Scheduled for September 14th – 17th and free to the general public, this year’s conference is being developed in partnership with Marian Liou’s We Love BuHi, a long-time local culinary organization and champion of immigrant visibility in the multicultural heart of Metro Atlanta. Buford Highway boasts some of the city’s largest Latino and Pan-Asian communities, also serving as a destination for hungry locals and curious visitors looking to sample international cuisine. Atlanta has been a beacon of diversity and inclusivity since its founding in 1839, due largely to the city’s historic importance as a mass transportation hub. By bringing these installations to Buford Highway, conference organizers hope to amplify the voices of local residents, adding dimension to the challenges they face as they stave off gentrification and live through an increasingly nationalist political climate. 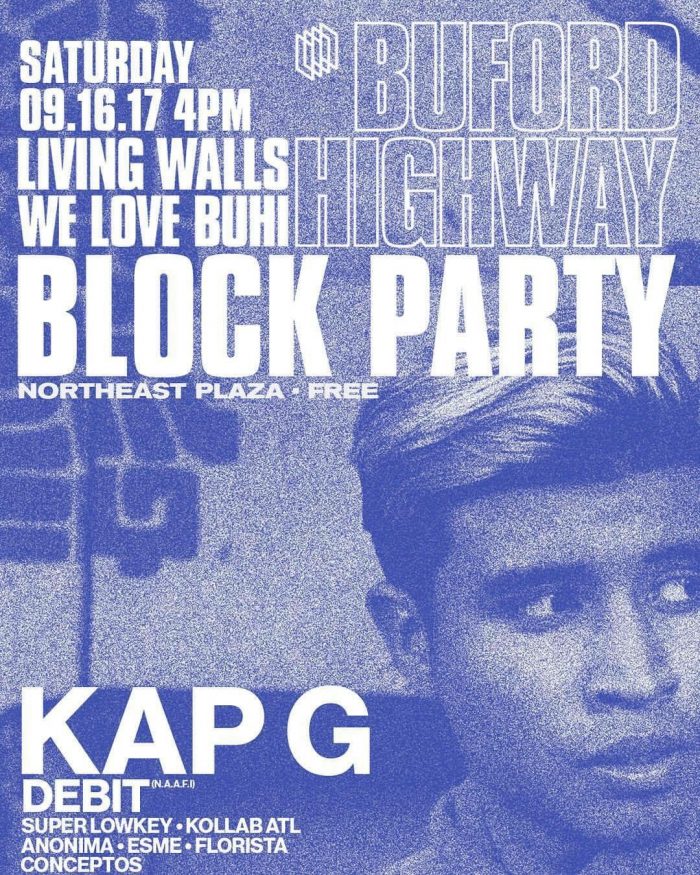 Make sure to swing through the Living Walls Conference and sample the bevy of flavors, art, and stories that make Buford Highway a unique Southern community worth lifting and protecting.