In 1999, Mariah Carey went on a Spanish-language TV show and talked about her Venezuelan roots. She explained why she decided to drop her last name for her seventh studio album, Rainbow.

“[My grandfather]’s last name was Nuñez,” she said about her Venezuelan grandpa. “My grandfather made up the name ‘Carey,’ when he came to America to be more accepted, I guess. But that was funny, because that’s an Irish name and Irish people were discriminated against at that time, too…That’s why, on the album, I just put Mariah now, because it’s not even my real last name anyway.”

While for her next album, Glitter, she also went by her first name, she has switched back and forth between Mariah and Mariah Carey since 2001.

Though – as Mic points out – Carey’s IMDB and Wikipedia pages may reveal she is Latina, it’s not a topic she often discusses. So this video is a rare look into this side of her, as is this old school Latina magazine cover: 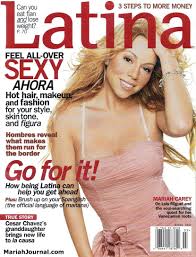