Miss USA 2022 Speaks Out Amid Favoritism Allegations: ‘It Was Not Rigged’

This past Monday (Oct. 3), R’Bonney Gabriel of Texas won Miss USA, and just hours after her crowning, allegations began circulating online of a “rigged” competition. Contestants have spoken out on what they claim was an unfair and pre-determined opportunity. Now, R’Bonney is speaking out in defense of her crown.

The new titleholder sat down with E! News to talk about the recent allegations that the organization displayed favoritism toward her. “It was not rigged,” she started. “I would never enter any pageant or any competition that I know I would win. I have a lot of integrity.”

One of the shared moments in question was the morning after the national pageant, in which one of the pageant’s sponsors — a Cancun hotel and its spa services — posted a pre-recorded video of the winner on the facilities. While at surface level, it appears to be a regular sponsored post celebrating the winner, the outrage stems from Miss Texas allegedly not being present nor crowned when the Miss USA contestants visited the hotel in June for a retreat. This stirred up allegations that the organization flew her out individually on a separate occasion and recorded sponsored content, an opportunity that allegedly wasn’t extended to one other contestant (Miss Colorado USA), who also wasn’t crowned in time for the retreat.

R’Bonney clarifies that she flew out, paying for the trip herself, and shot the promotional videos there as Miss Texas USA, for which they’re also a sponsor.

Another moment addressed is when the contestants immediately walked off the stage after the crowning moment instead of giving the traditional congratulatory hugs the winner receives from the state titleholders. R’Bonney says the broadcast was cut, but claims she did receive hugs from the other contestants and is in good standing with them all.

While she says she hasn’t had a chance to speak to contestants like Miss Montana Heather Lee O’Keefe, who has been vocal on social media, R’Bonney says she’s open to a conversation. “I would love to communicate with her because I think there’s a lot of allegations that are coming up that aren’t true, and people are leading to conclusions that just simply aren’t true,” says the Miss USA. “I want to be transparent, and I want everybody to know that there was no unfair advantage and nothing was rigged.”

Miss Universe also released a statement on Instagram Stories. “We are aware of the concerns that have been brought forth by this year’s Miss USA contestants. We commend the women for bringing these issues to our attention and will always be an organization that encourages women to use their voice,” it read. “There are existing systems in place to ensure the fairness of our national competitions, and as such, we have begun an active review into this situation.” 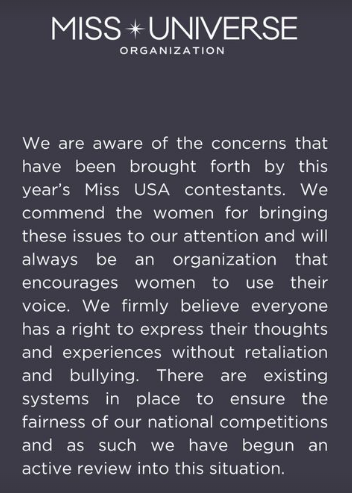 Among the contestants to speak out are two Latinas, including Miss New York USA 2022, Heather Nunez, and Miss Massachusetts USA 2022, Skarlet Ramirez. Nunez wrote, “We were humiliated, thinking we entered something with a fair chance… The ONLY reason I am speaking up is to prevent future contestants from feeling the way that I do.”