By now we know that Customs and Border Protection (CBP) and Immigration and Custom Enforcement (ICE) violently tear families apart, but we don’t always see how traumatic these interactions are. A new video, however, is shedding light on the aggressiveness of these agencies. On Saturday, 36-year-old Perla Morales-Luna walked alongside her three daughters near 24th and D streets in National City, California. Eventually, two CPB officers – who weren’t wearing uniforms – surrounded them. As Perla attempted to hold on to a young woman, the agents pulled her until she could no longer resist. They shoved her into a patrol car. Perla’s daughters screamed and asked for answers as they saw their mother driven away.

A woman who was dragged away from her daughters by border patrol agents has been released by an immigration judge while her case is processed.

The judge said Perla Morales-Luna is neither a danger to society nor a flight risk. pic.twitter.com/dXCKBPGKXm

The video has caused widespread fury and brought increased attention to how harmful these practices are to families, especially those with young children. “This is actually one of our quarters where we have mass transit, so to have something like this go down, in the broad daylight, it really is concerning,” National City Councilmember Alejandra Sotelo-Solis told NBC San Diego. “What was posted I think really showed the inhumane treatment of that woman being physically ripped from her children and then leaving the minor children here on the street not knowing what to do.”

As the difficult-to-watch video spread online Thursday, CBP accused Morales-Luna of being the “organizer for a transnational criminal smuggling organization in East County, San Diego” in a tweet. An hour later, the Twitter account told Latino Rebels that it couldn’t release further information about the charges leveled at Perla. 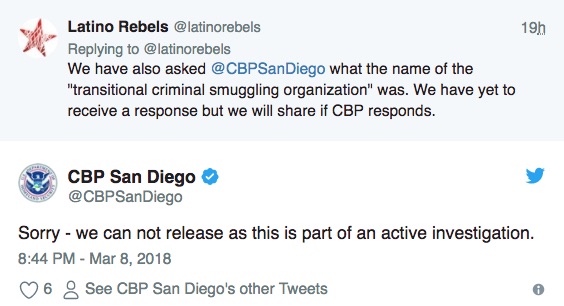 Morales-Luna’s lawyer has spoken out since the arrest. At a press conference he stated that Perla has no criminal record and has lived in the United States for more than half her life.