Three big names in reggaeton teamed up recently for an exciting collaboration, which dropped last week. “Sal y Perrea Remix,” which features Sech, J Balvin, and Daddy Yankee, came as a follow-up to the original track by the Panamanian artist that debuted earlier this year and has reached over 88 million views on YouTube. Just days after the remix’s release, we’re getting an exclusive behind-the-scenes look and taking you on the set of the music video, which has already generated over 8 million views. J Balvin and Sech sat down for an honest discussion on the remix, how it all came to be, and their bond outside of the studio.

“I’m a fan of Carlos,” J Balvin shared, referring to Sech by his first name. “More than performers, we’re family. I consider Carlos a little brother, and he knows how much I love him.”

Sech agreed, adding that he and J Balvin speak all the time. When they do converse, they both reveal that music is only about 10% of what they talk about. 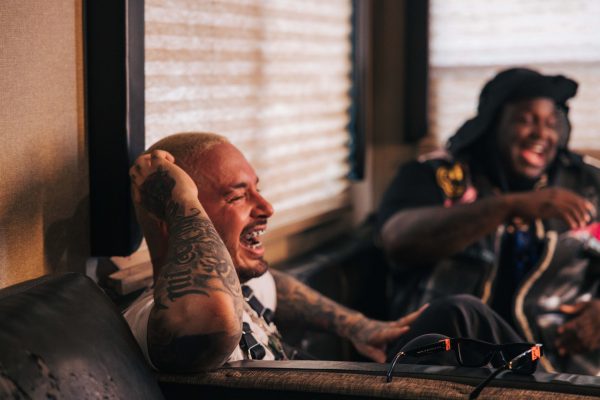 As to how the collaboration came about for “Sal y Perrea Remix,” they were inspired by the new phase of the pandemic with lighter regulations and vaccinations — although Sech was quick to tell people to still be careful. The remix felt like a natural call for the artists during a moment of people wanting to be out of quarantine and go back to having fun. And for both J Balvin and Sech, it was also a moment of representation.

Since Balvin, Sech, and Daddy Yankee are all from different parts of Latin America, they point to how this collaboration bears the diversity within Latinidad and all the artists making music for the world. “Seeing the three of us, together, each of us representing a country,” says J Balvin. “This song is about coming together.”

For Sech, this collaboration held even more significance given the two artists he was standing alongside. He added, “I’m very proud to be in the middle of two people that have done so much for the genre. That makes me very happy.”

Below, you can watch more of the exclusive interview featuring Sech and J Balvin, where Balvin talks about the representation and the unique talent that Sech brings to the music industry. They also discuss what dreams mean to them and much more.

“Sal y Perrea Remix” is now available to stream on all platforms.