On Tax Day, a Reminder That Undocumented Immigrants Pay Higher Taxes Than the 1 Percent
Search
Culture 04.18.17 at 4:31 pm

On Tax Day, a Reminder That Undocumented Immigrants Pay Higher Taxes Than the 1 Percent

Last year, Filipino journalist Jose Antonio Vargas tweeted an image of a $48,039.99 check he wrote to the Department of Treasury. The image intended to once again shatter stereotypes that undocumented immigrants don’t pay taxes, but it’s Vargas’ message that still remains poignant today. “Here’s a check for $48k that I paid to the IRS, which is more than happy to collect $ while DHS/ICE wants to deport us,” he wrote. This year, as undocumented immigrants face a heightened threat of deportation under the Trump Administration, this community once again reminds us that despite the complications, they file taxes – at higher rates than the 1 percent – and don’t receive the benefits they deserve.

here's a check for $48k that I paid to IRS, which is more than happy to collect $ while DHS/ICE wants to deport us. pic.twitter.com/DEUUTIpxiJ

Recently, Juan Escalante – an undocumented immigrant who can legally work because of the Deferred Action for Childhood Arrivals program – wrote a piece on Vox on why he always pays his taxes. “Paying taxes reaffirms my commitment to this country and proves that undocumented immigrants, like my family and me, are not the freeloaders Republicans make us out to be,” he wrote.

After a lawyer mishandled his family’s immigration case, Escalante and his family became undocumented. But his parents remained committed to paying their taxes. They wanted to show that despite their status, they’re law-abiding citizens. He recalled his mother explaining her reasoning: “‘Ay, hijo,’ my mother would tell me from time to time, ‘If we are to be deported, at least I hope the government takes into consideration the fact that we have always paid our taxes.’” 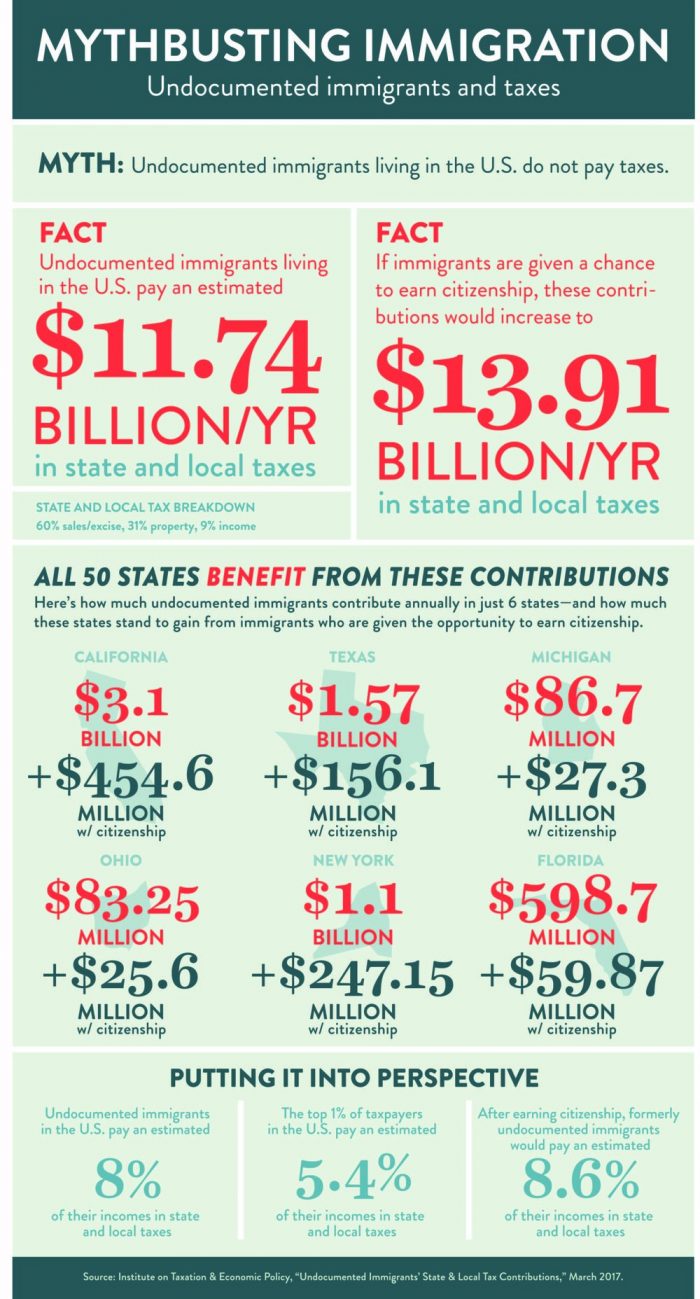 Though we know that undocumented immigrants pay an estimated 8 percent of their income in state and local taxes – compared to the 1 percent’s 5.4 percent – there’s no exact number on how many of the nation’s undocumented immigrants pay taxes. But according to Vox, Washington DC think tank Institute on Taxation and Economic Policy estimates that about half of them file taxes. And in March, the Institute reported that this community contributes $11.74 billion each year to state and local taxes. Though undocumented immigrants add billions of dollars to the Social Security program, they don’t receive any of the benefits. They also aren’t eligible for unemployment, healthcare, and sometimes disability.

In a video for Fusion, a group of undocumented immigrants discussed how filing their taxes doesn’t put them one step closer to residency. “I remember growing up and learning about no taxation without representation and the Tea Party and how they dumped tea in order to oppose the king. Any single citizen or legal permanent residents that pay taxes – if they are not represented, they’re going to feel very offended,” one said. “I think I, myself, feel very offended being an undocumented taxpayer who currently has no pathway to adjust my status.”

Now, as President Donald Trump sets his sights on increasing deportations – including of undocumented immigrants without criminal records – and building a wall to separate the United States and Mexico, their tax dollars may end up going toward funding policies that will cause irreparable harm to themselves or their families. And yet, this won’t stop some undocumented immigrants from filing their taxes.

In 1996, the IRS established the Individual Taxpayer Identification Number (ITIN) – allowing those without documentation to file their taxes on the money they earned. It’s illegal for the IRS to reveal if someone’s undocumented to Immigration and Customs Enforcement (ICE). Also, if the government ever granted this community a path to citizenship, those who dodged paying taxes could face an unexpected hurdle.

Of course, for the undocumented community it’s not always as simple as wanting to do what’s right. Filing taxes sometimes requires much more effort for this group – simply because not everyone is informed enough to help. For example, during a visit to an accountant a few years ago, Escalante had to use his cell phone to avoid an extra penalty.

“The accountant asked why I had been without health insurance for a specified period of time, and told me that I could be penalized under the Affordable Care Act,” he wrote. “‘I do not qualify for the ACA. I am an undocumented immigrant,’ I revealed to the tax preparer. It didn’t take long for me to realize that the tax preparer had no idea what I was talking about. I used my phone to navigate to the National Immigration Law Center’s website, and showed her that undocumented immigrants, or ‘illegals’ as the tax preparer repeated, were exempt from any ACA penalty. The accountant finally agreed to move on to the next step in my tax filing process.”