Vanessa Bryant Reveals Her Mom Is Extorting Her In Court

Vanessa Bryant, widow to the late Kobe Bryant, took to social media yesterday (Dec. 17) to reveal her mother, Sofia Laine, is extorting her in court.

Nearly a year after the death of Kobe and their daughter Gianna Bryant, Laine has filed a complaint in court suing her own daughter for financial support. According to documents obtained by People, Laine claims she worked as an unpaid “longtime personal assistant and nanny” and alleges that before Kobe’s death, he “promised to take care of” her “for the rest of her life.”

The grieving mother and widow, who lost both her 13-year-old daughter and her husband in a plane crash that killed all nine passengers, released a statement via her Instagram Stories, directly refuting her mother’s claims.

“I have supported her for nearly 20 years, and she was never my or Kobe’s personal assistant, nor was she a nanny,” Bryant began. “I have always been a stay-at-home mother and my husband and I were our daughters’ full-time caregivers.”

“For nearly two decades, we arranged for my mother to live in our nearby properties, at no cost to her because she had claimed that she didn’t have any money to buy her own home after her divorce. My husband and I felt it was best for her not to live in our home. She watched our girls from time to time, just like most grandparents do. She did not take care of business issues or expenses,” Bryant stated.

“Earlier this year, I was looking for a new home for her and, a week later, she went on television and gave an interview disparaging our family and making false accusations while living rent-free in a gated apartment complex in Newport Coast. Even after that betrayal, I was willing to provide my mother with monthly support for the rest of her life and that wasn’t good enough,” Bryant said.

“She instead contacted me through intermediaries (contrary to what she claims, my phone number hasn’t changed) and demanded $5 million, a house and a Mercedes SUV,” Bryant alleged. “Because I did not give in to her hurtful threats and monetary requests, she has spiraled out of control and is making false and absurd claims.”

Bryant concluded, “She is now trying to get more money than my husband and I ever spent to provide for her while he was alive. She has no regard for how this is affecting my children and me. She wants to live off of my daughters and me for the rest of her life while continuing to collect monthly alimony from her ex-husband since 2004. My husband and I have never discouraged or kept her from providing for herself. This lawsuit is frivolous, disgraceful and unimaginably hurtful. My husband never promised my mother anything and he would be so disappointed in her behavior and lack of empathy.”

Laine responded via TMZ saying, “why would she do this to her own mother?” The case is currently pending. 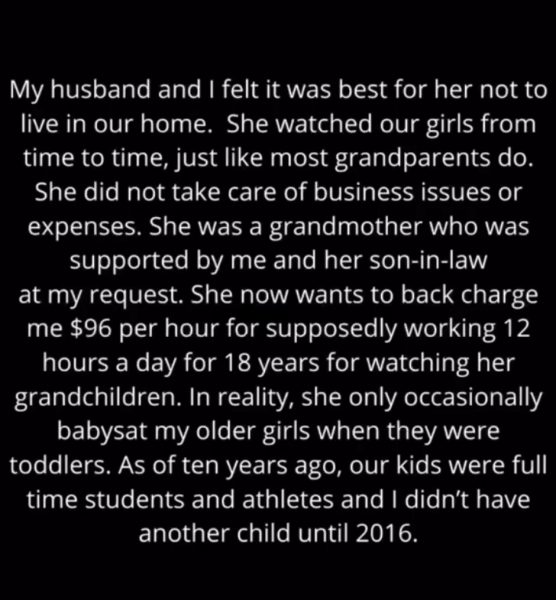 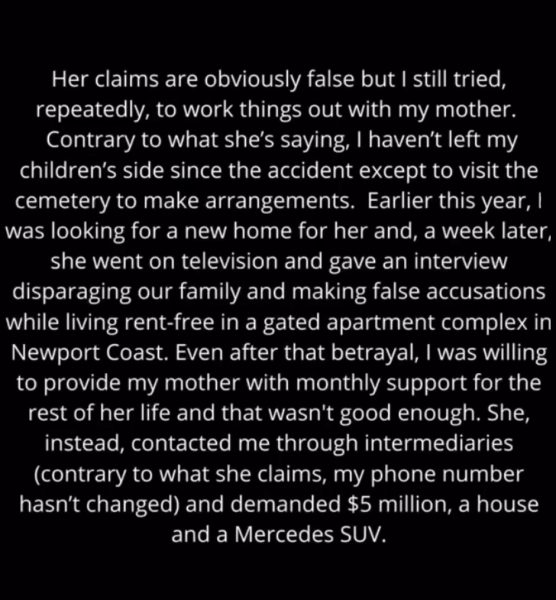 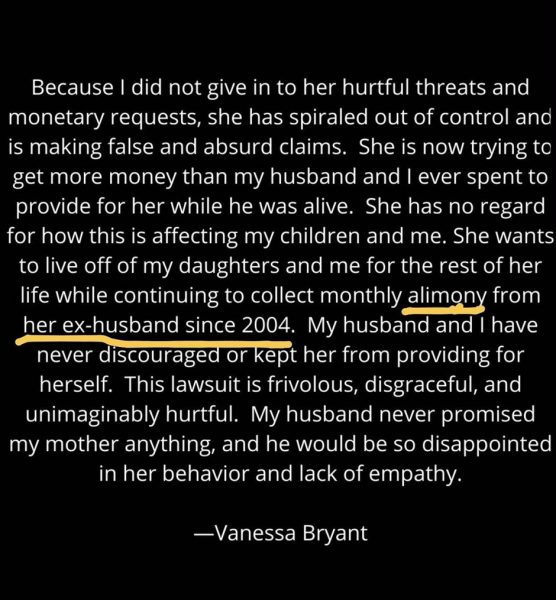