By Lola Méndez
10.14.20 at 5:07 pm
Lead Photo: Basketball player Kobe Bryant and wife Vanessa at the official after party for the 2004 World Music Awards, September 15, 2005 at Body English in the Hard Rock Hotel in Las Vegas, Nevada. Photo by Frank Micelotta/Getty Images

Vanessa Bryant has gotten several new tattoos since the tragic death of her husband Kobe Bryant and daughter Gianna Bryant. They were killed in a helicopter crash in January in Calabasas, California. The grieving widow has since tattooed beautiful tributes to her departed family members as talismans on her body.

In February, she said that she was now wearing a “sweet message” from Gianna on her wrist and a message from Kobe on her neck, but clear photos of the tattoos never surfaced so we still don’t know what the tattoos say. Tattoo artist Nikki Hurtado inked those two pieces in the comfort of her home. 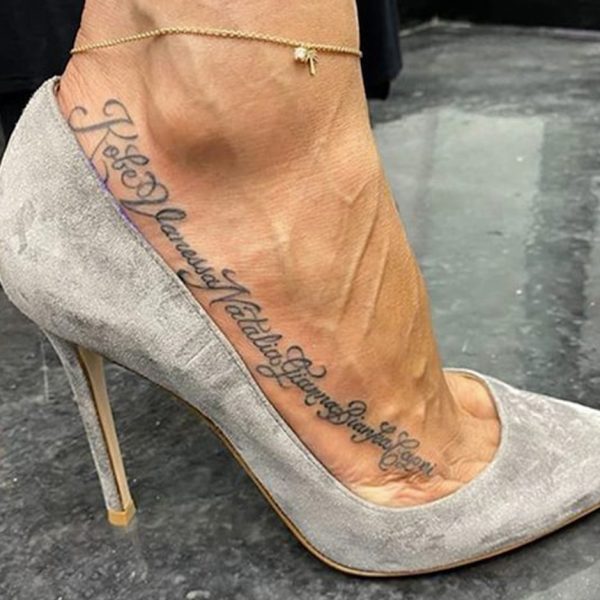 The tattoo lists the names of her family in the order of their birth. The names Kobe, Vanessa, Natalia, Gianna, Bianka, and Capri are tattooed forever along the outside of her right foot. The tattoo is a meaningful way for her to honor her family and keep them close to her at all times. The names are intertwined as a symbol of the unbroken family bond that exists between them.

She captioned the Instagram post with “mi familia.” In the photo posted on Instagram, the mother showed off the ink in a pair of grey stilettos that perfectly frame the tattoo in an Instagram photo where she used the hashtag #KobeVanessaNataliaGiannaBiankaCapri Together Forever. The heart-felt tattoo was done at artist Mr. Cartoon’s new Santa Monica tattoo parlor.