By Mey Valdivia Rude
06.10.19
BUTCH. Photo by Ed Krieger. Courtesy of Brown and Out Festival

After meeting Latino students who were living double lives – feeling they had to hide their queerness and be “perfect immigrant sons” for their families – Josefina López felt LGBTQ Latinx writers needed a space to tell their stories. So in 2011, she set out to create the Brown and Out Festival. Originally, the plays were 10 minutes and were created in a writing class that she was leading. Now five years and more than 80 short plays later, the festival continues dedicated to featuring the work of writers and directors, who are ready to tell their unique stories.

This year’s festival coincides with the 50th anniversary of the Stonewall Riots, which have shaped the modern LGBTQ movement. This year’s festival – which takes place from June 7 to July 7, features the work of 12 writers, including plays To Rocco, With Love; Zaddy, Mija, and Are You Gay or Latino? There’s also a trans themed film called Tacos y Tacones. The performances take place at CASA 0101 Theater in Boyle Heights on Thursdays, Fridays, and Saturday. Tickets come in at $30, but there are discounts for students as well as Boyle Heights residents. (There’s also a pay-what-you-can option for those who need it.)

With the fifth festival underway, I spoke with López to learn about how Brown and Out has grown in the last few years and how the current political climate has played a role.

Editor’s Note: The following interview has been edited for concision and clarity. 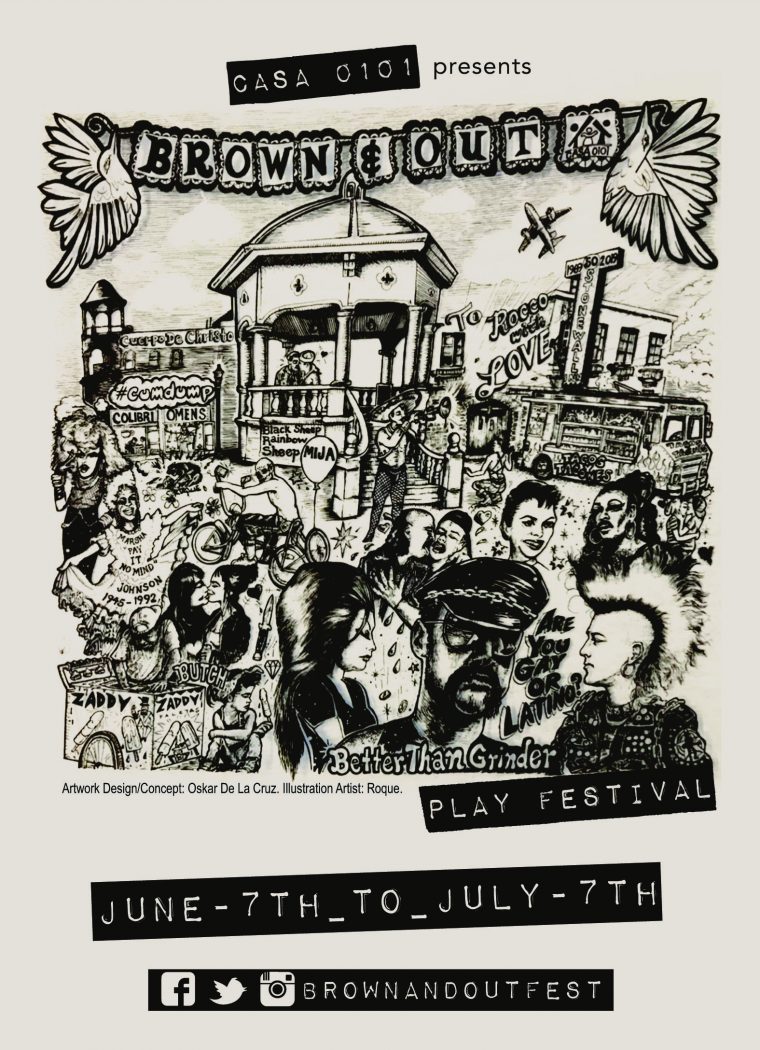 This is the fifth year of the festival. How has it grown and changed over the years?

I’ve always been an advocate of living your truth, and the reason I’m an ally is that the courage it takes to live your truth, no matter who you are, is really an incredible message for everybody to learn from.

When we first put the festival together, I took the work that I had already written and a play that another playwright had written on the subject of coming out… The year after that, we had people submit plays and we chose them, and then I felt like we really needed to start a writing workshop that was devoted entirely to LGBTQ writers so that the plays can be about every different nuance of LGBTQ life. People see the plays and they’re so moved and inspired and their like, “Oh my god, I have a play, too!” And they go to the playwriting workshop and now we have a lot more plays. We’re starting a movement, and my dream is that all the leaders in the festival won’t just want to do this once a year, but will want to have a year round theater so we can write plays that deal with every kind of sexual exploration and identity.

With Trump and his administration rallying around a border wall, and with deportation and family separation and deaths in ICE custody, it’s more important than ever for Latinx writers to tell their own stories. How did the current political climate affect this year’s festival?

I think it’s made everyone bolder. It’s made everyone dig deep. I’m very proud of the people who’ve said, “I’m going to talk about the most painful thing that has ever happened to me. I’m going to talk about all the things that really hurt because I don’t want them to hurt.” When you take anything that’s in the dark – that’s a secret or that causes you pain – and you decide to share it with a community, you find out you’re not alone and you can heal quicker. All healing takes place in a community. It’s made people say that the boldest thing you can do is love your life and your humanity and show your vulnerability.

Unless you’re evil, most people are completely disarmed when you show your vulnerability. When people try to dehumanize me, I let them see my tears and I let them see my pain and then people go, “Oh my god, I’m feeling your pain because I’m connecting to your humanity.” I’m going to hold onto my humanity and my dignity and my corazón, and I’m not going to fight with you. I’m just going to hold onto the love I have for myself.

What’s your favorite thing about the festival each year?

To watch so many different points of view of experiencing your own body and identity. It’s always educational for me, and I know if it’s teaching me something, it’s teaching the audience something. The greatest thing to me is someone who’s never experienced theater or never seen their community represented on stage and they watch and go, “Wow I’m normal, someone understands what I’m going through.” They come out in tears and they want to get involved in theater or they want to write their own story or they just want to share their story with someone because they know they’re not alone anymore.

What do you want to say to any LGBTQ Latinx folks who are thinking about attending but aren’t sure if it’s for them?

There’s so many topics represented! When you watch the whole spectrum of what it means to be a human being, you’re going to see yourself in the show. And here’s the thing, if you don’t see yourself, then you need to write your own show and be involved next year.