On paper, Danny Flores is currently a senior at Dreher High School in Columbia, South Carolina. But Flores is much more than that: He’s also a bright, ambitious artist and filmmaker who’s been responsible for some incredible work thus far, especially within the context of the queer community. Flores currently leads as both the president of his school’s Gay Student Alliance and doubles as a youth leader at Columbia’s Harriet Hancock LGBT Center, where he’s helped organize rallies, vigils and the first-ever youth queer prom in the state.

While he’s been heavily involved in LGBT-related activism in South Carolina and at the annual Creating Change Conference, Flores – who was ​b​orn in Tamaulipas, Mexico, and moved at age four with his parents – says that, until recently, a void still remained. “For a while I felt like a piece of me was missing and was empty,” he tells Remezcla. “And I realized that it was my culture and where I came from that was missing in my life.” The queer and Latinx communities in the Deep South are hardly mutually exclusive, but, history has had the capacity to create a series of sharp divides there. So once he had that realization, Flores started making moves to bridge his involvement in both communities through art and activism alike.

Flores fell into filmmaking, in a way, at the behest of a leader at the Harriet Hancock Center who encouraged him to get involved with a queer film program at the local arthouse theater, The Nickelodeon. “That’s when I started really getting into filmmaking,” Flores explains. “I’m not a pro but it was this one time project that I did, and it really had an impact on people. I guess that’s why I really wanted to share that with people, and tell them that filmmaking is a really easy way to express yourself and it’s really empowering.” Flores’s first short film, what he describes as a “self project mainly focusing on my dysphoria and my struggles as a trans man, especially here in the south,” was called Freak of Nature. “I showed it to my film class and they were really touched by it, because it was really personal,” Flores shares. Freak of Nature screened outside of the classroom, too, at last year’s Indie Grits film festival.

He’s back at Indie Grits this year, too, as part of the Visiones artist cohort. This time, he’s bringing with him a wildly different (and interactive) project that probes further gnarled questions of queer and Latinx identity within the context of the south. The project, La Jotería, is a play on the classic Mexican card game La Lotería, which uses vibrant drawings instead of numbers for a game of bingo. While the premise of La Jotería is the same as La Lotería, and Flores is drawing cards in the same style, he’s revamped and redrawn all 54 cards in the deck, both by hand and with some digital work. Simultaneously, he’s using the cards as a way to subvert themes and words that historically have been used against queer and Latinx communities. 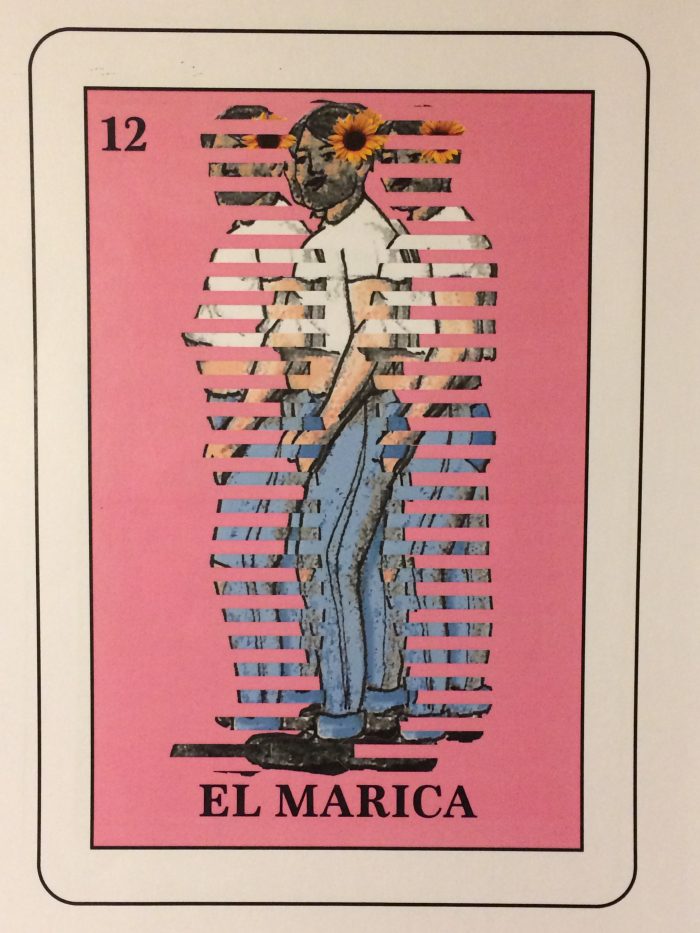 “I wanted to change all of those images to things that represent the Latinx community now and use words that have been used negatively towards us, just to break stereotypes and reclaim these words, like the same way the LGBT community has reclaimed the word ‘queer,’” he says. “As an example, I’m using a card for ‘el marica,’ which means ‘faggot.’ And I’m putting my own spin to it.” That unique spin is called “glitching,” which Flores describes as “taking a picture and editing it so that it looks glitchy,” much like when a T.V. malfunctions and distorts an image. The technique takes advantage of these “errors” and makes something fresh out of them, and it’s evident in cards like “La Migra,” which features a vivid image of a devil that looks slightly out of focus, with a maniacal grin plastered on his face and donning an ICE vest.

Flores wasn’t just drawing from his imagination, though. He incorporated real situations and people into La Jotería, too. “I actually reached out to people that I met at Creating Change, and people I see on Instagram that are really big activists and asked them if I wanted to be models for my project,” Flores says. So I’m using real people for some of these.” La Jotería was made with the intention for people to engage with it, too. The dazzling cards that Flores has been drawing aren’t simply going to be displayed: Indie Grits attendees will be able to visit a room and play a game of La Jotería featuring Flores as the master of ceremonies. Best hope that fortune’s on your side, since some of the big prizes include large prints of some of the special cards Flores drew. Either way, La Jotería offers the invaluable experience to redefine cultural markers, and, through play, draw new definitions for words have historically been used to tear people down.