By Andrea Gompf
01.26.17
Photo by Itzel Alejandra Martinez for Remezcla

In a matter of hours, the New York chapter of the Council on American-Islamic Relations (CAIR-NY) put together a protest rally that drew thousands to Washington Square Park on Wednesday evening. Holding signs that read “I stand with #ImmigrantNY” and “No One is Illegal,” and chanting “Say it loud, say it clear, refugees are welcome here,” protesters listened to speeches from City Council Speaker Melissa Mark-Viverito and Women’s March on Washington national co-chair Linda Sarsour, among others.

Eventually, the rally left the square, marching up toward Columbus Circle. As protesters walked up Broadway, many Latinos working in restaurants and stores along the avenue began peeking out to the street to thank the protesters for their support, or to join in the chanting. It was a special moment, but also one that underscored the conversations about privilege that have emerged from the rallies and marches in Trump’s first week as president. While immigrant rights were the subject of this rally– particularly those of refugee, undocumented and majority-Muslim communities – these communities represented very few of those in attendance. The same is true of the Women’s marches that took place all over the country on January 21, which, despite a racially and ethnically diverse leadership committed to intersectional issues, drew primarily white crowds.

While gathering peacefully to protest is an American right, it is not accessible to everyone.

The demographic breakdown of protest turnout may be partly a reflection of our country at large. But it’s also a reminder that not everyone who is outraged and afraid can afford to be in the streets. Many of those who will be most affected by Trump’s immigration policies are people who work nights and weekends, people for whom a run-in with law enforcement could literally mean deportation, and whose race, religion or ethnicity often determines their treatment by the police and judicial system.

The risk of confrontation with law enforcement at protests that center black and immigrant issues has also been a subject of conversation in the aftermath of the largely incident-free Women’s marches. According to the NY Daily News, the NYPD arrested six people for disorderly conduct on Wednesday, as the protesters made their way through midtown. For much of the rally, police helicopters flew overhead. “We were trying to cross this crosswalk and there were 20 people but they just singled these people out and threw them on the ground,” 21 year-old protester Dace McNally told the NY Daily News. This is in stark contrast to the Women’s March on Washington, which despite its historic turnout had minimal police presence and no arrests, according to a top official in the capital.

Those with more power and privilege must leverage it to stand up for our nation’s most marginalized and vulnerable.

As movements continue to coalesce in resistance to Trump’s dangerous immigration and law and order rhetoric, it’s worth considering that while gathering peacefully to protest is an American right, it is not one accessible to everyone.

Of course, it is also important and meaningful that those with more power and privilege in US society leverage it to stand up for our nation’s most marginalized and vulnerable. A widely circulated photo of a sign at one of the Women’s marches drove this message home. “I’ll see you nice white ladies at the next Black Lives Matter march, right?,” it read.

At Wednesday’s rally, Public Advocate Letitia James touched on the need for a broad-based fight as well, comparing the resistance to Trump to the Civil Rights movement of the 1960s. “This is the struggle of all Americans,” she said. “We’ve got to join hands and protect the marginalized community and vulnerable communities — just as we protected African-Americans in the ’60s, we’ve got to protect those who they’re coming after.”

Below, we talked to some of the protesters about why they came out and the fight ahead.

Interviews and photos by Itzel Alejandra Martinez for Remezcla. 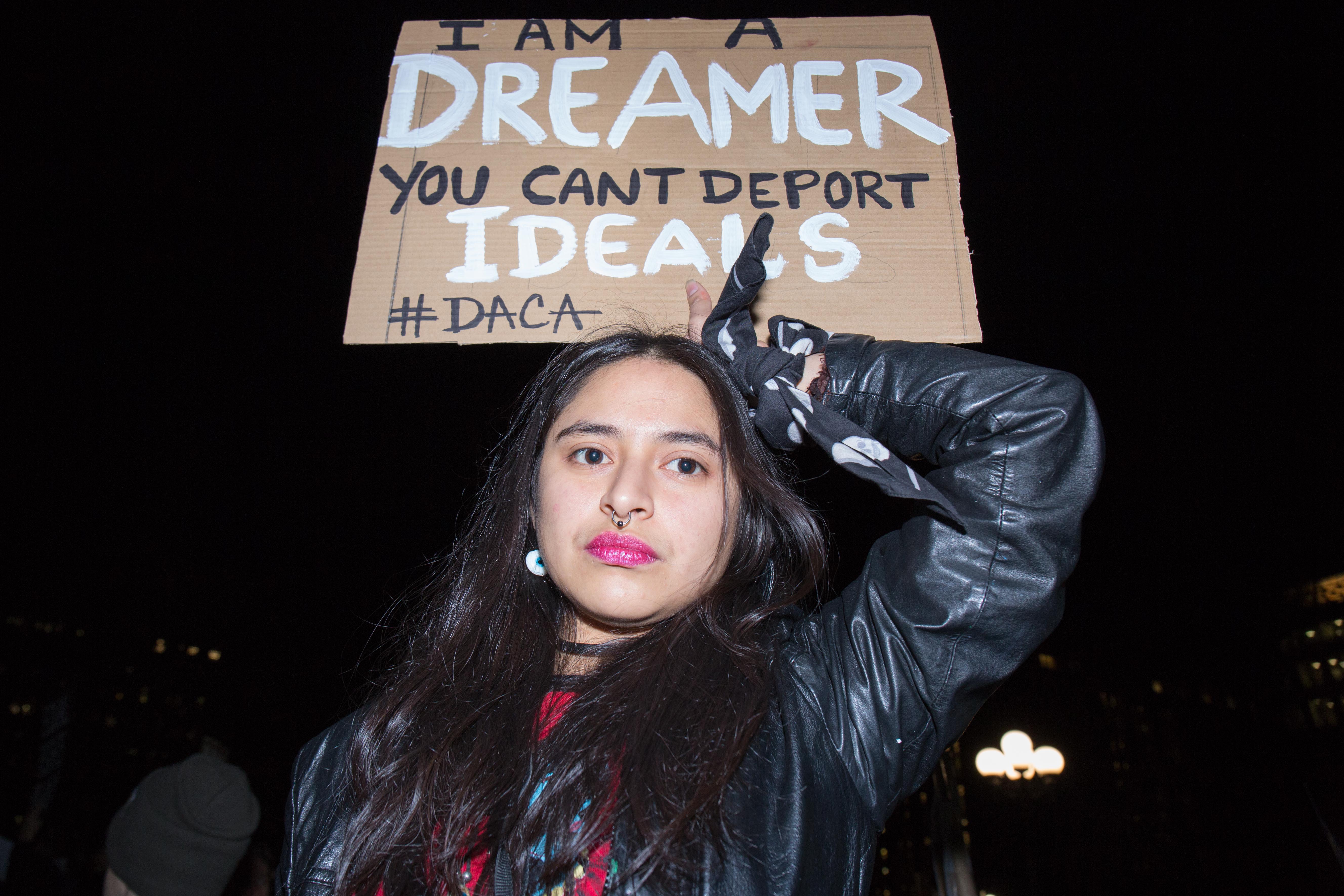 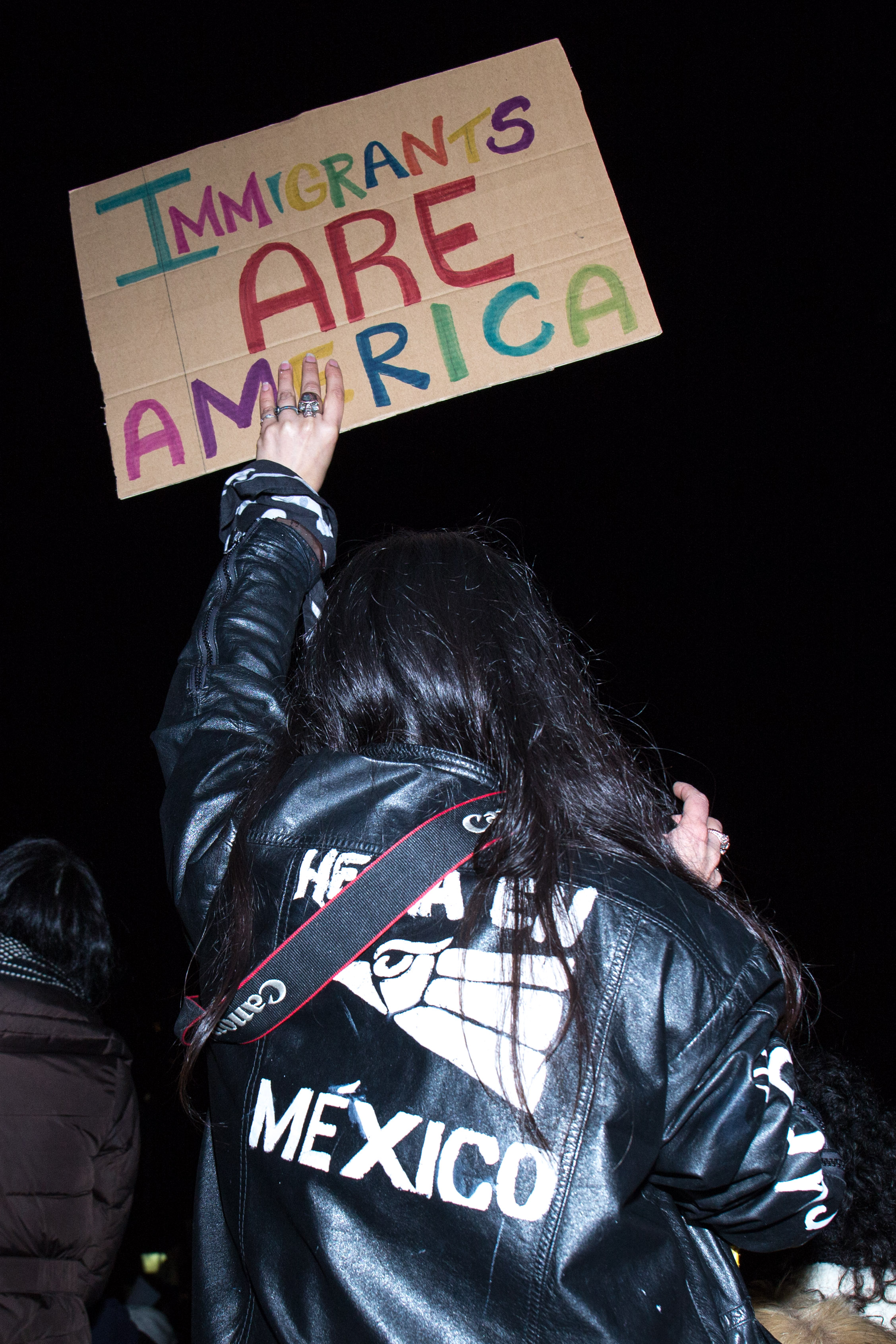 “I am here because I’m a DACA recipient and that’s being threatened by [Trump]. I stand with my immigrant community, Muslims and everyone. Together we are stronger. A bunch of different walks of life from different countries.” –Gloria Mendoza Medina, 26, Mexico DF 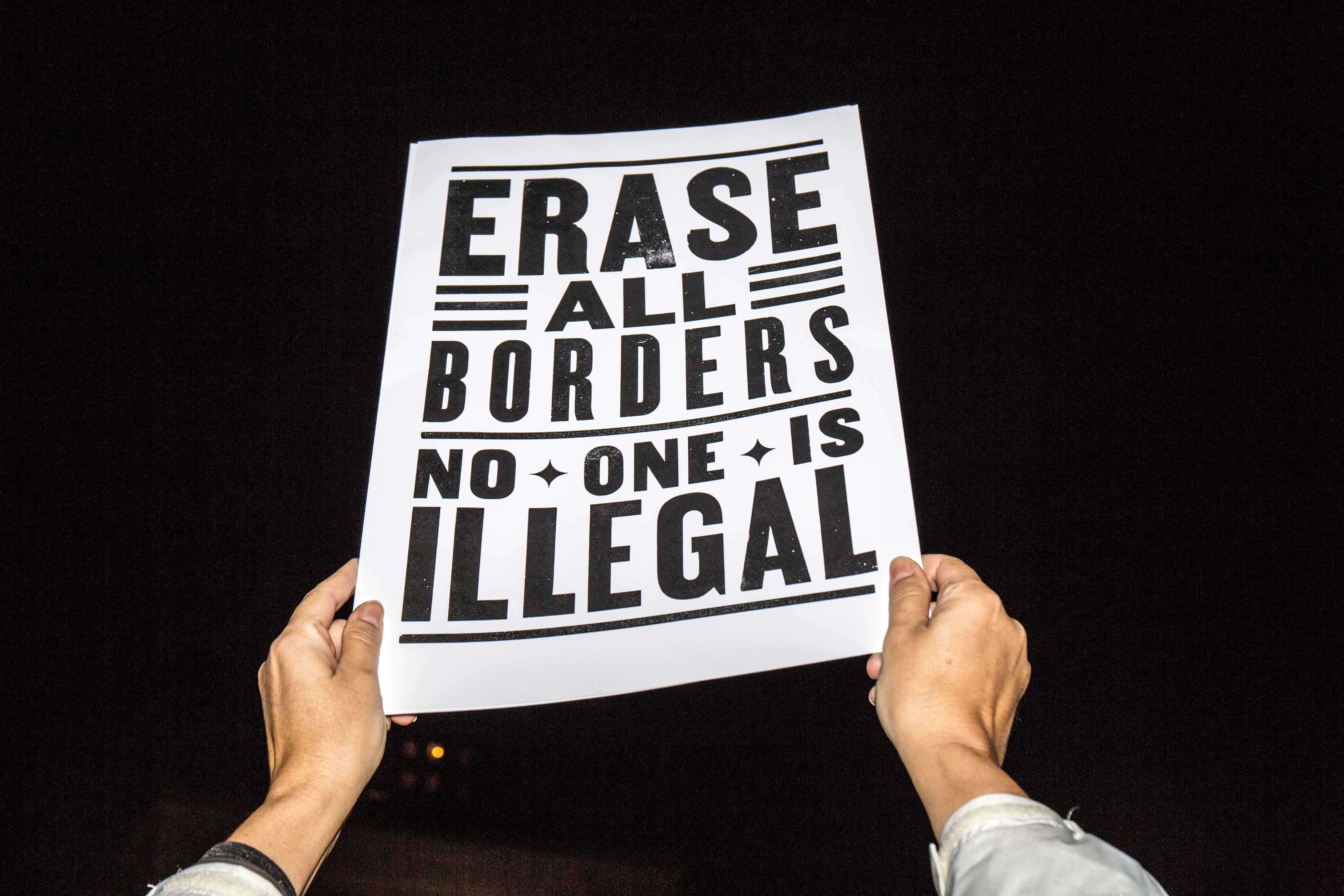 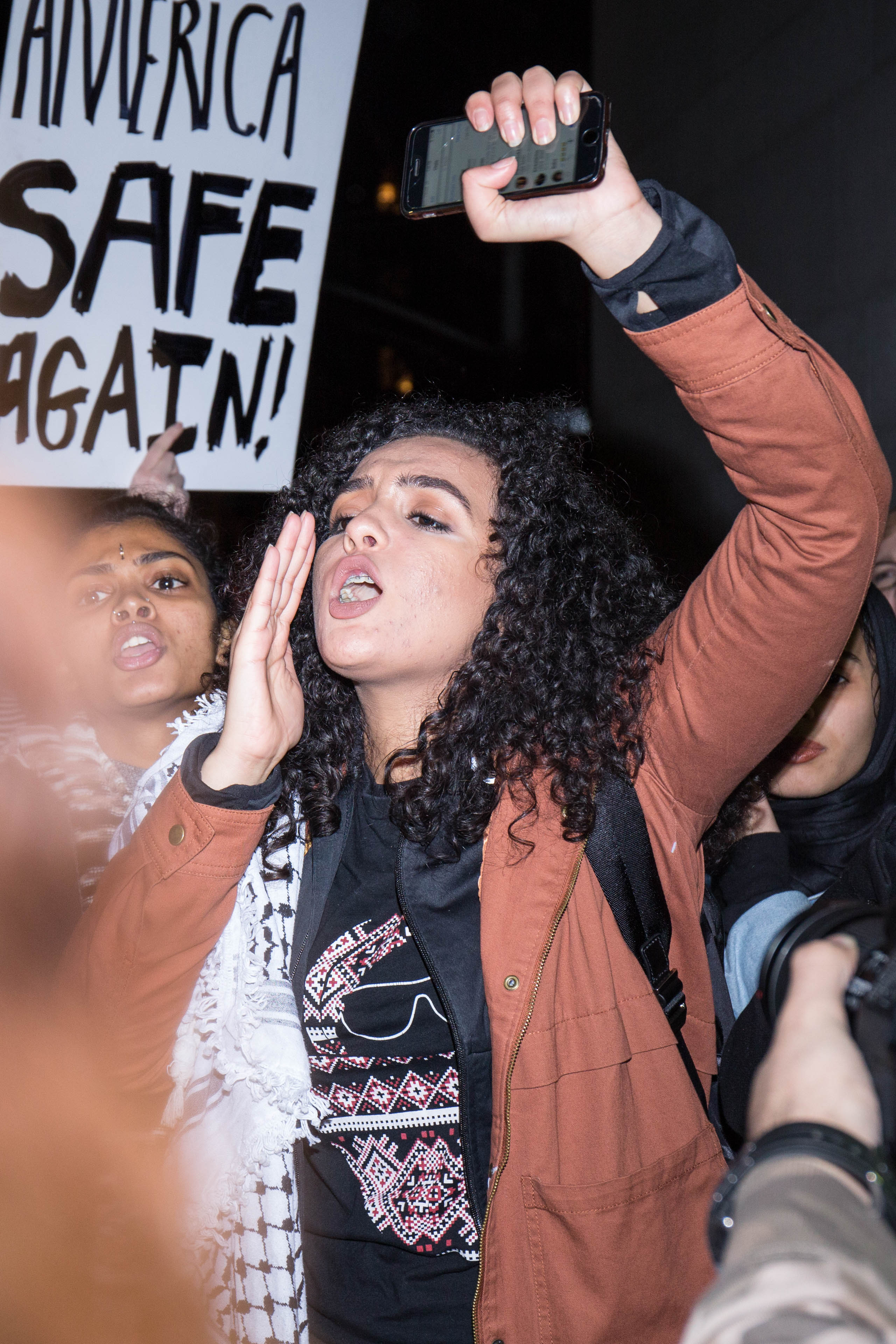 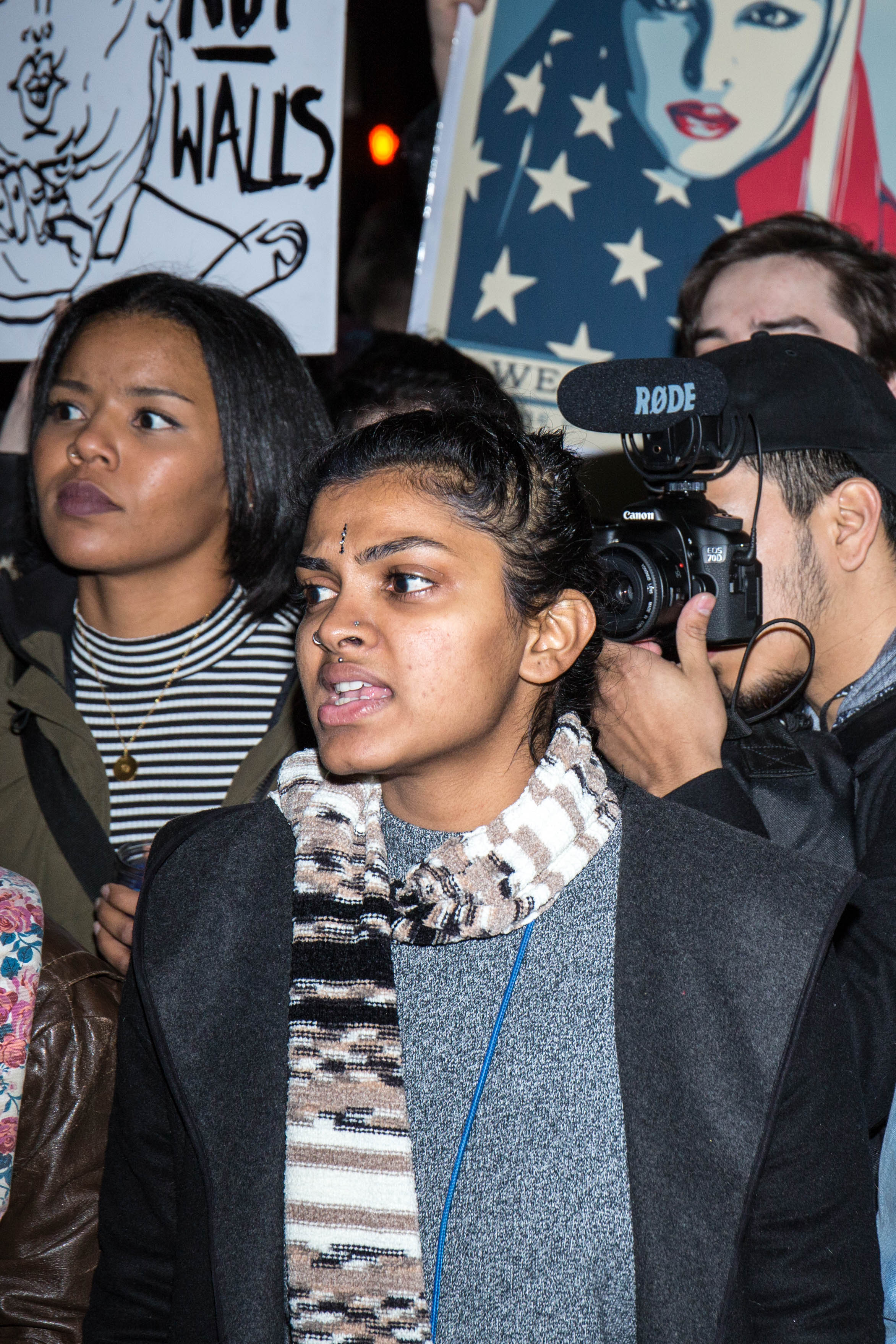 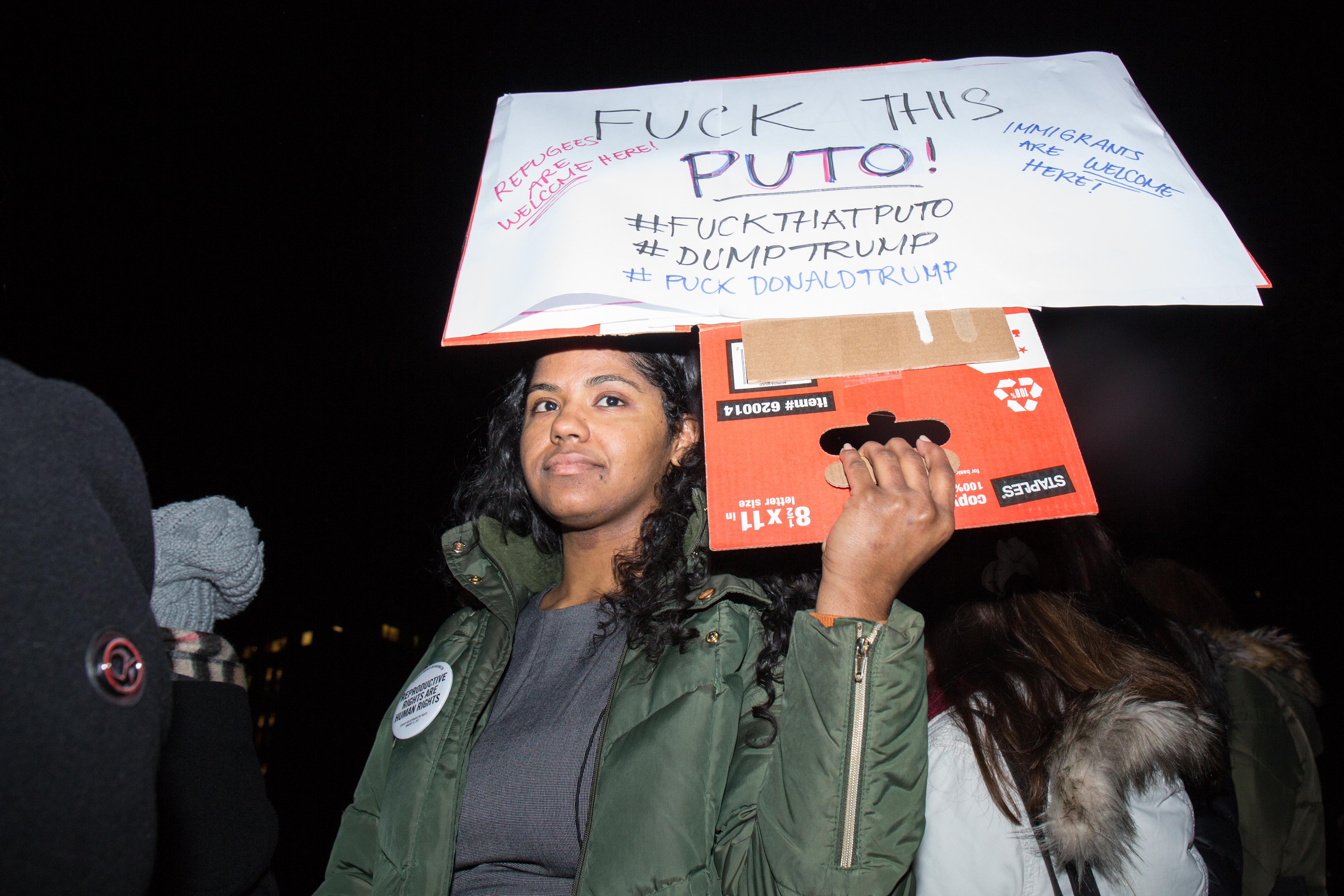 “I am first generation, but I come from immigrant parents so this issue in particular hits home to me. All the issues have hit home to me. I am also brown and identify as Afro-Latina and I am very involved in Black Lives Matter. The issue with immigration, I think the Muslim ban and Muslim registry is an absolute violation of the constitution. It’s very obvious to me that fascism is rising in the United States and I consider this my country, although it may not love me back. I am here to fight against fascism, I am here to defend our Muslim brothers and sisters, who are fighting the same struggles that Latinos have been fighting for a very long time.” – Yara Calcaño, 26, Jersey City. 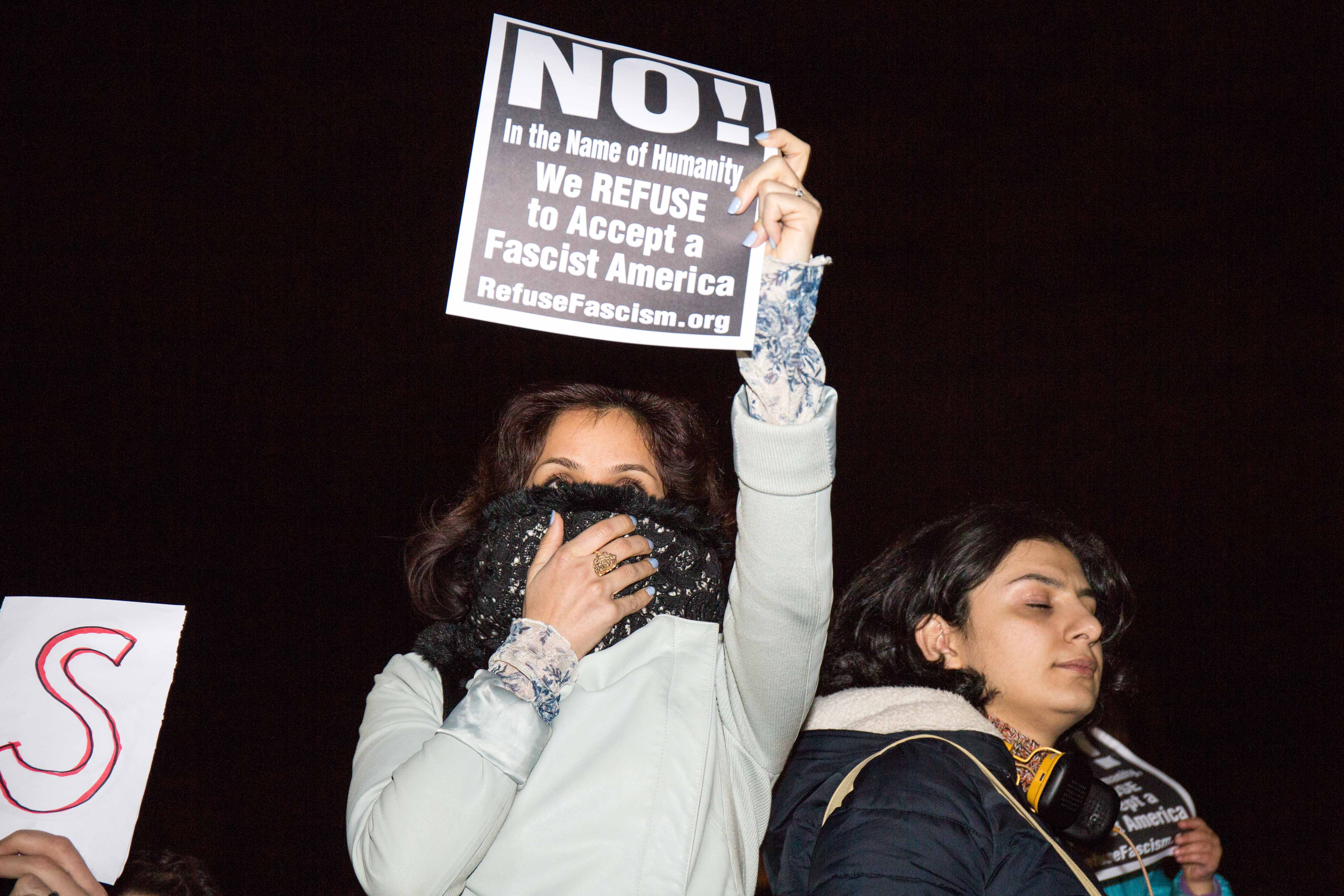 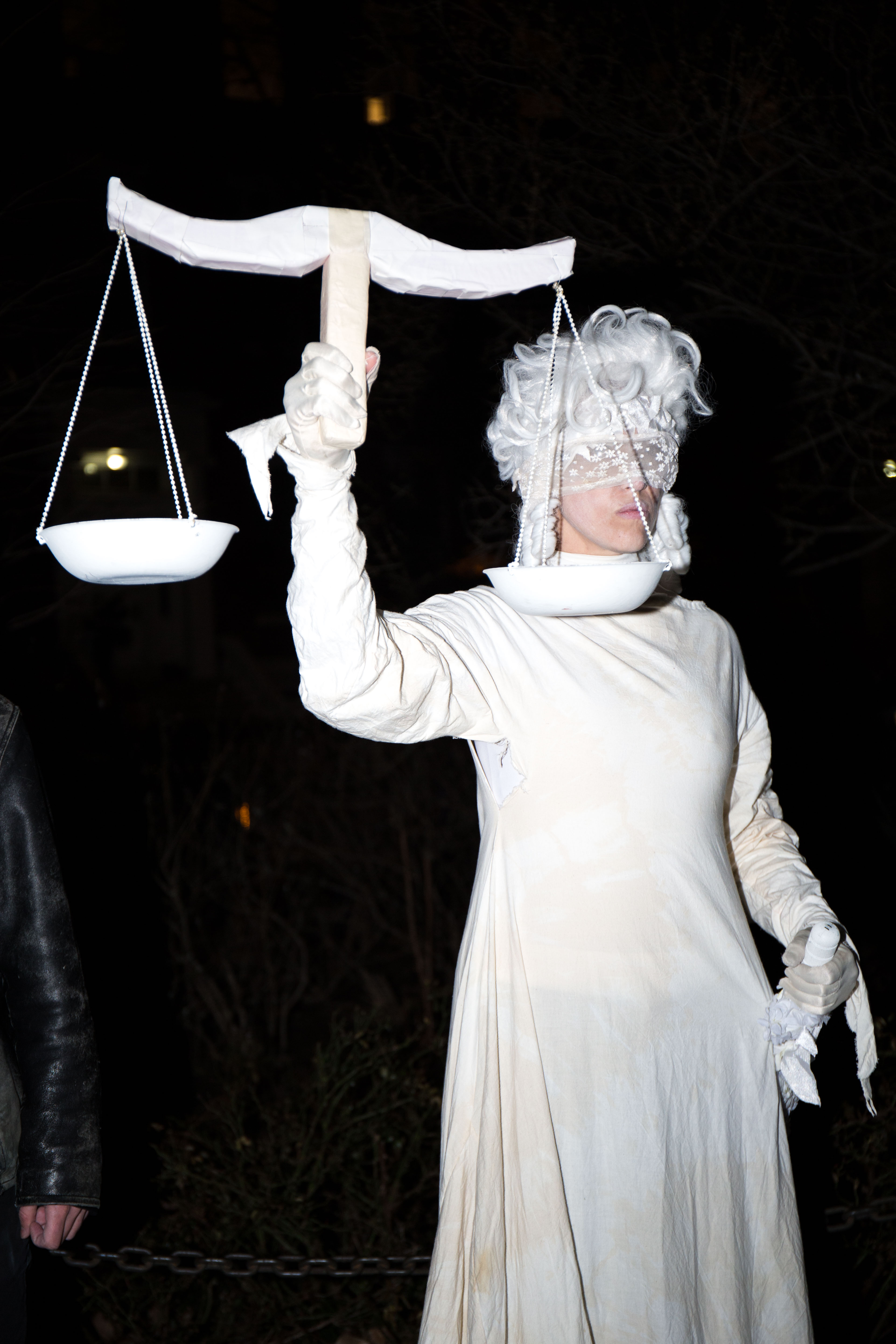 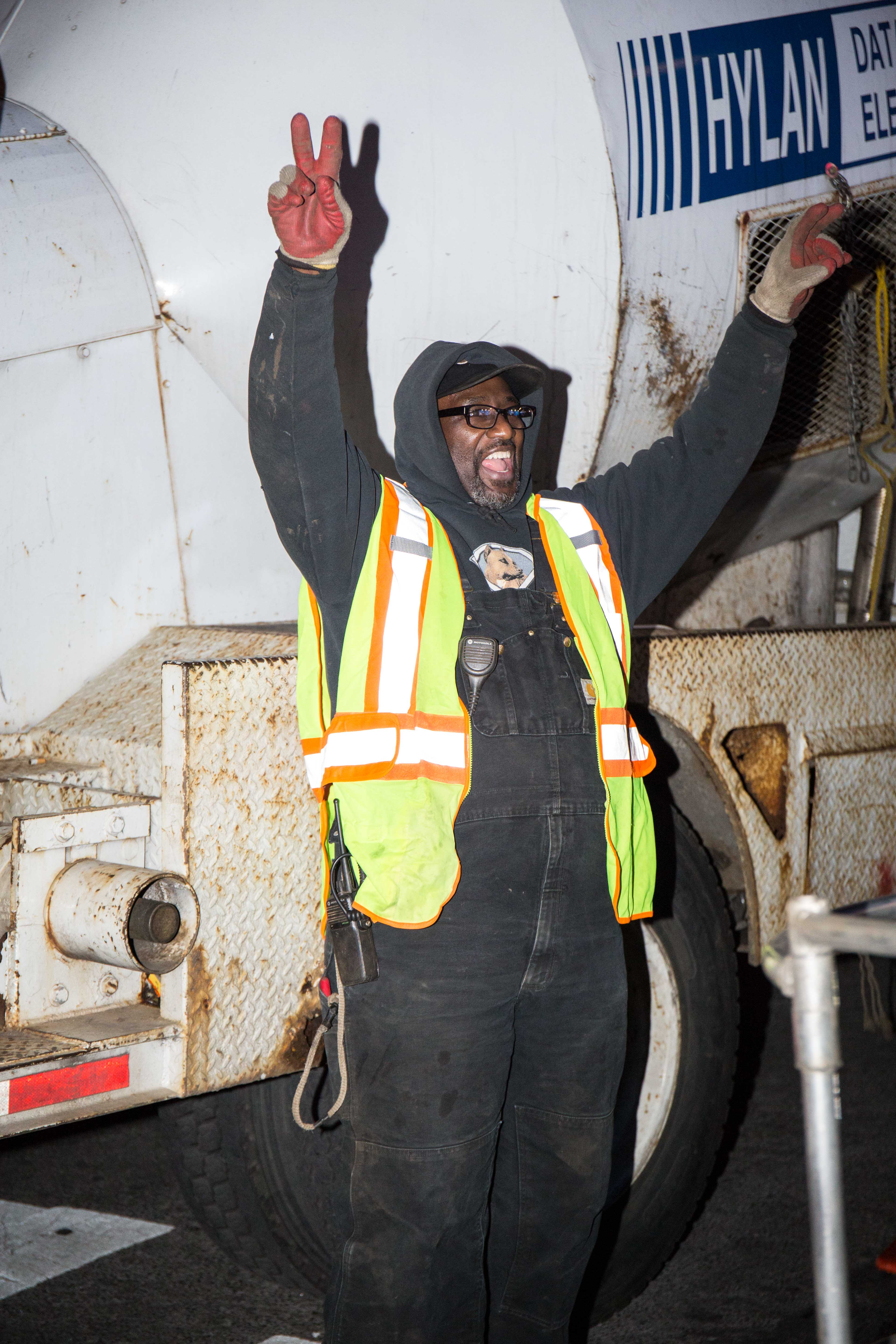 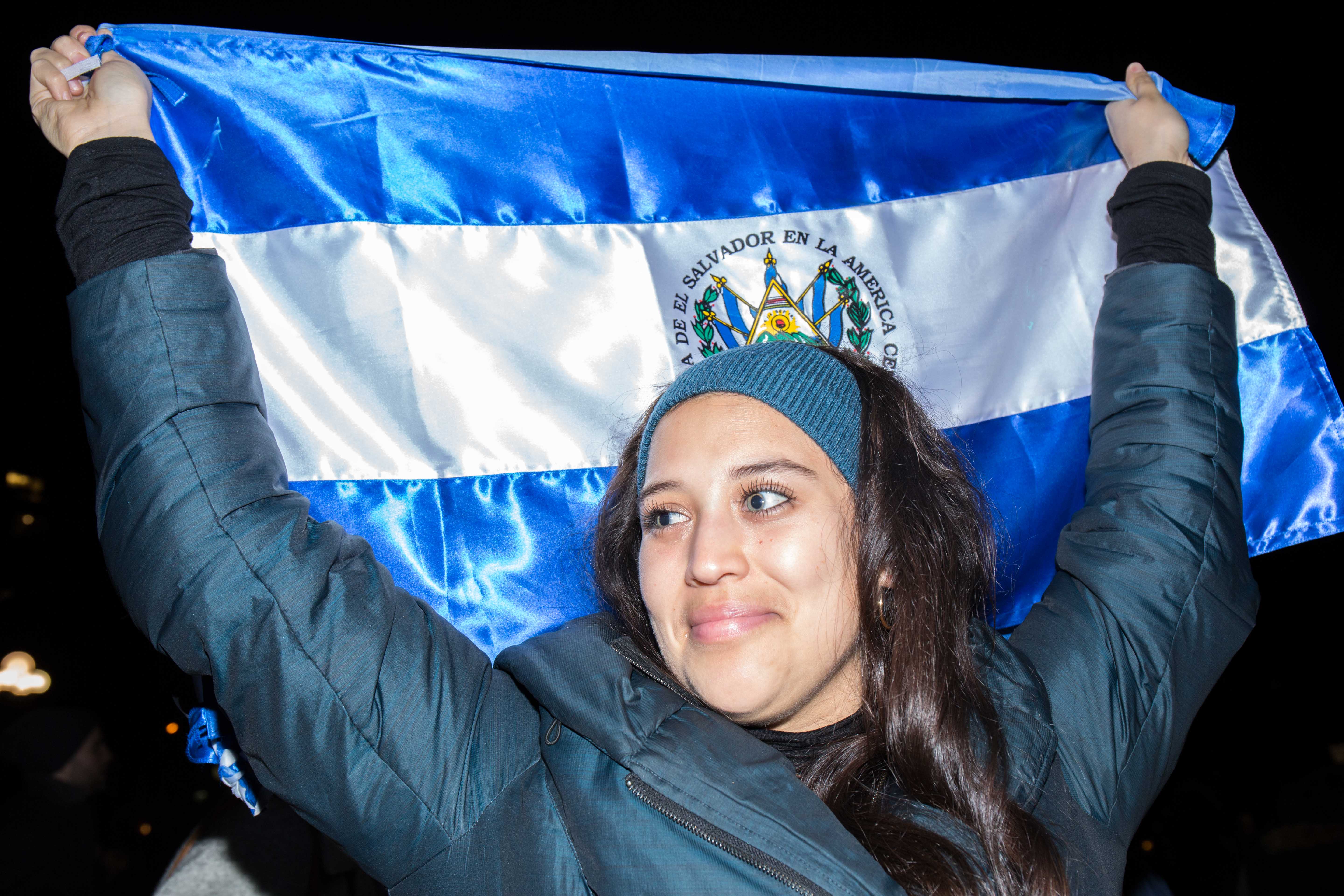 “My parents both came to the United States during the Salvadoran Civil War. At the time the Clinton administration was offering asylum for Salvadoran immigrants, so they were able to get their papers that way. I am the proud daughter of Salvadoran immigrants. That instills in you this value of not wanting to take for granted the freedoms that this country gives us.” – Abby Jordan, 23, Brooklyn 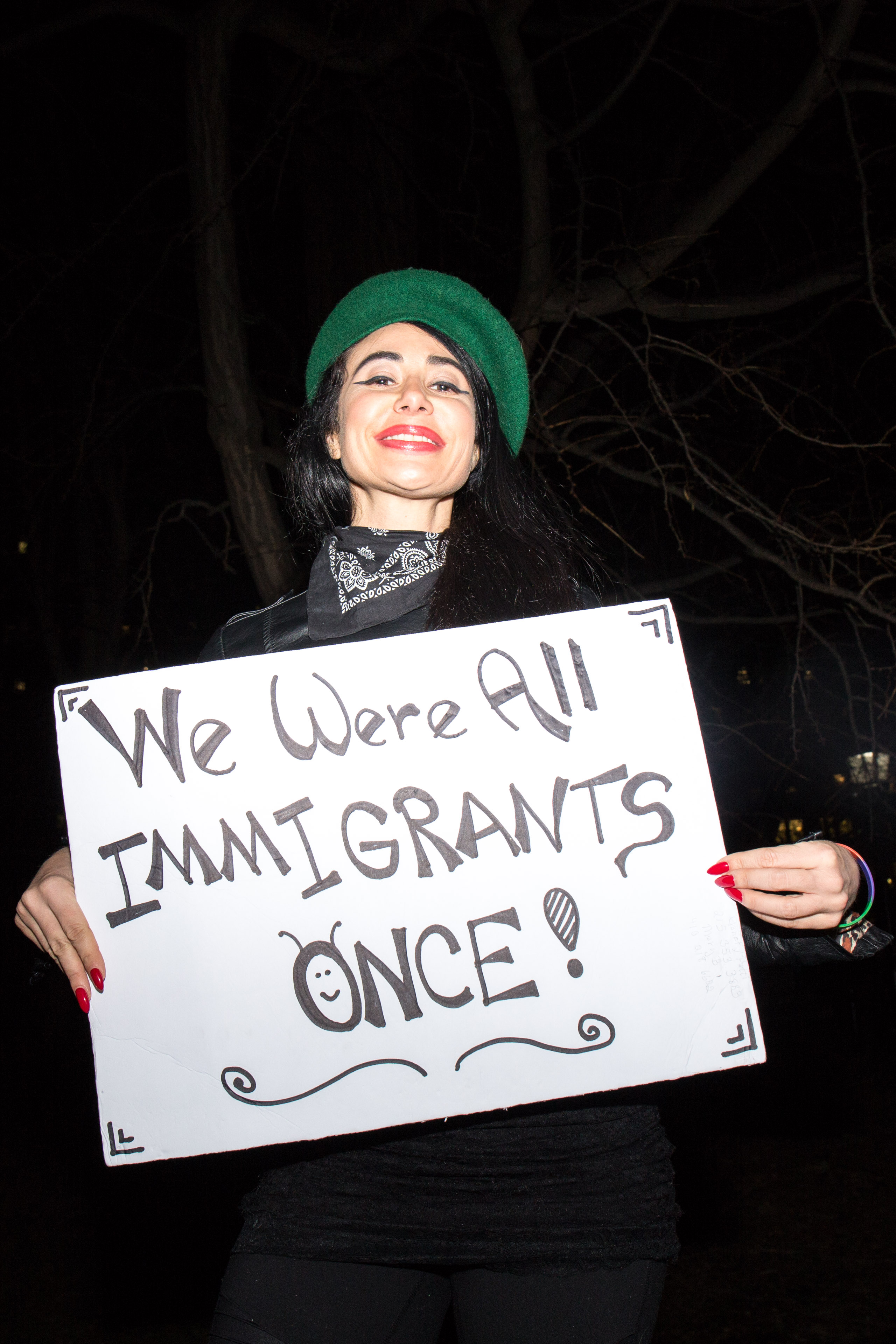 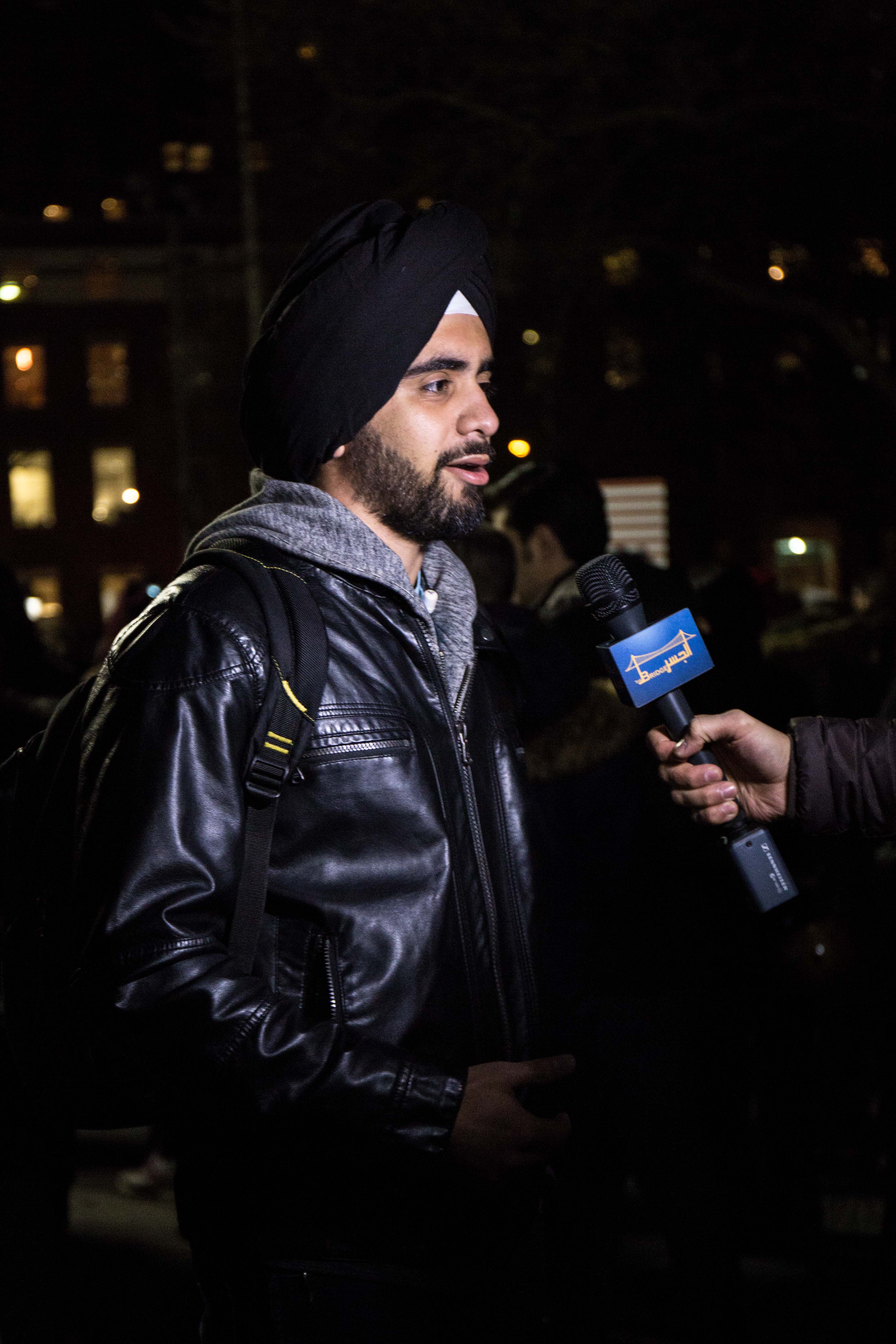 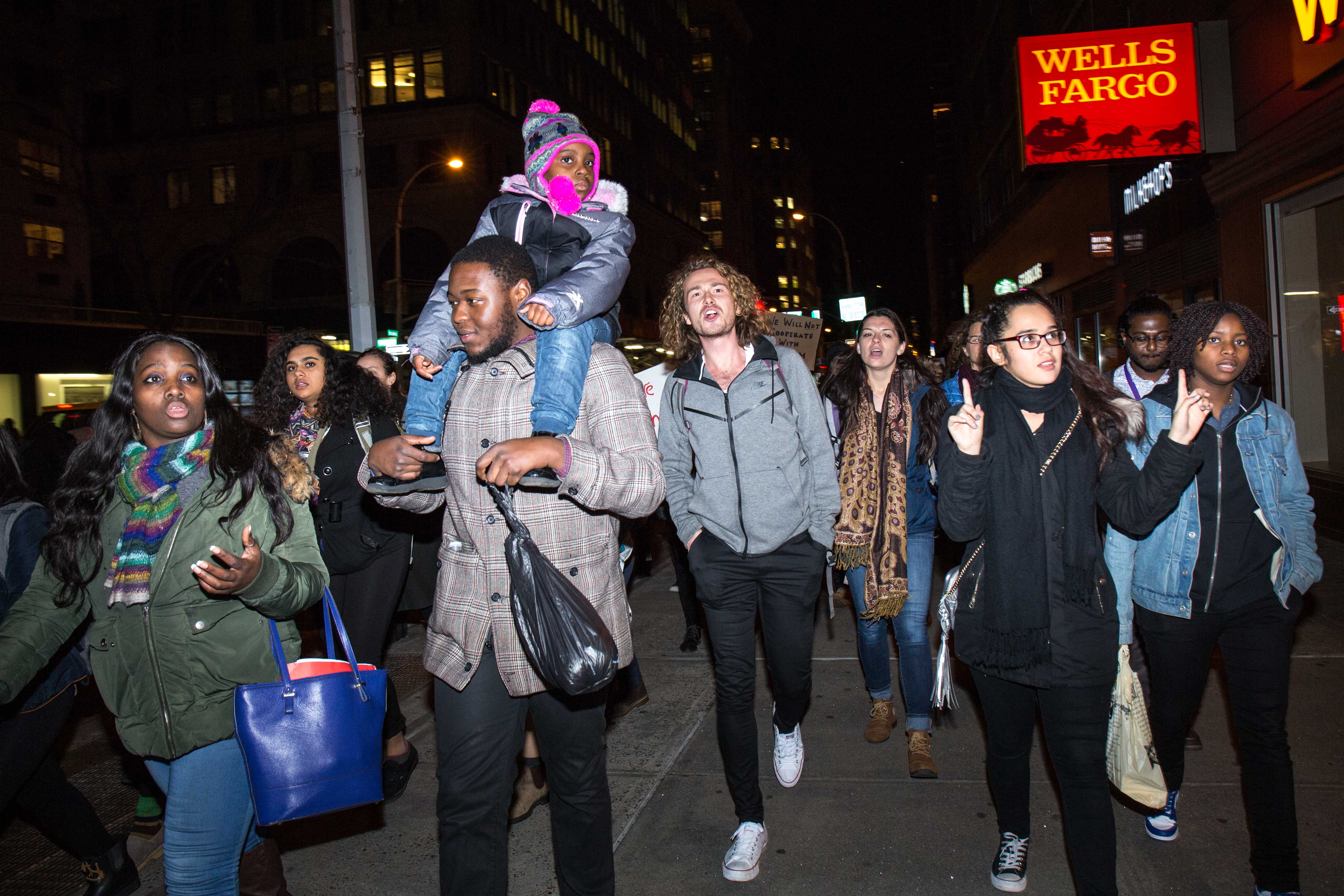 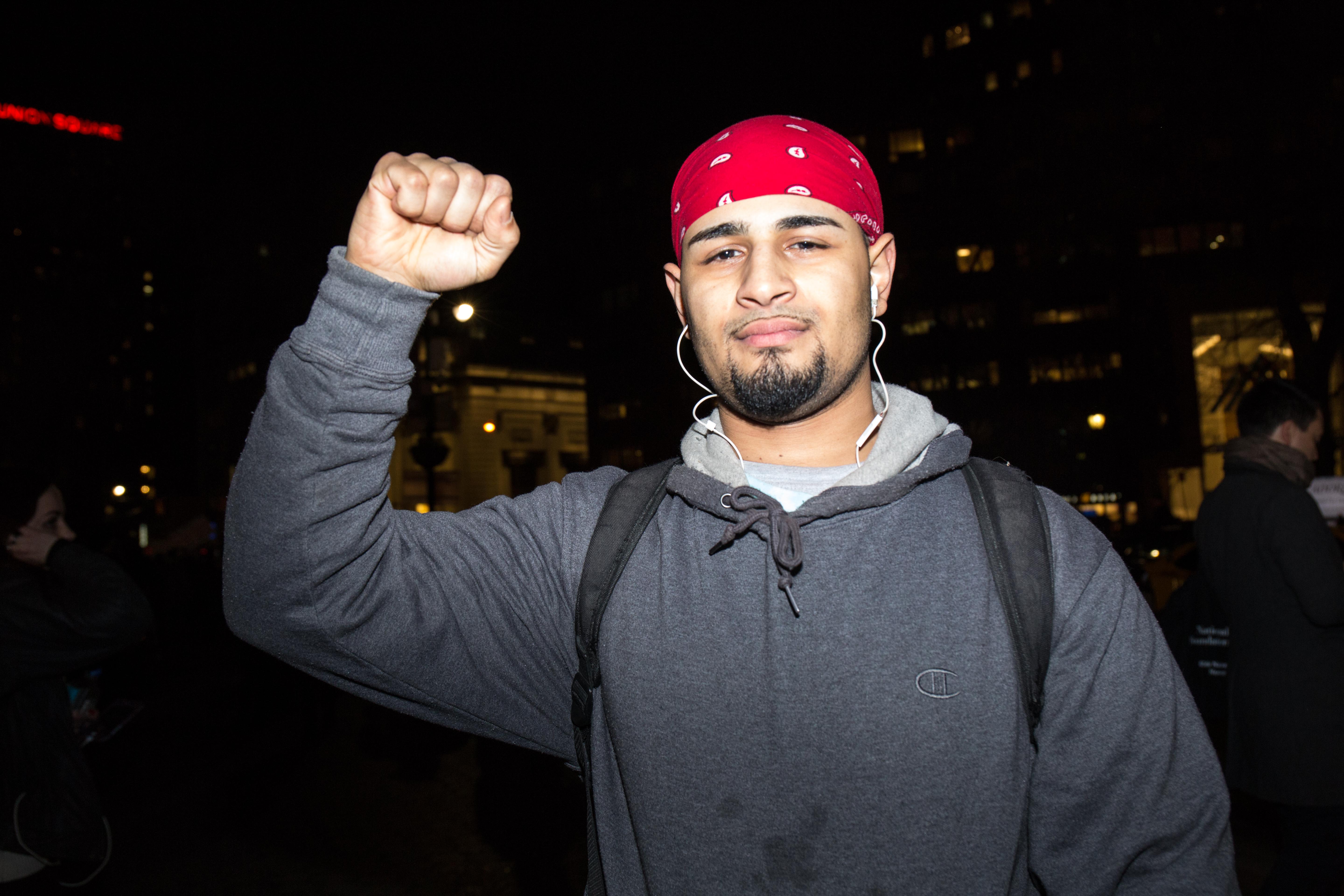 “They [police] should not be blocking us and trying to divide group. We are protesting, marching, we are not hurting any businesses, we are not doing any rioting. I see a police state and they are oppressing our voice.” – Aldo Lopez, 23, New Jersey via Dominican Republic 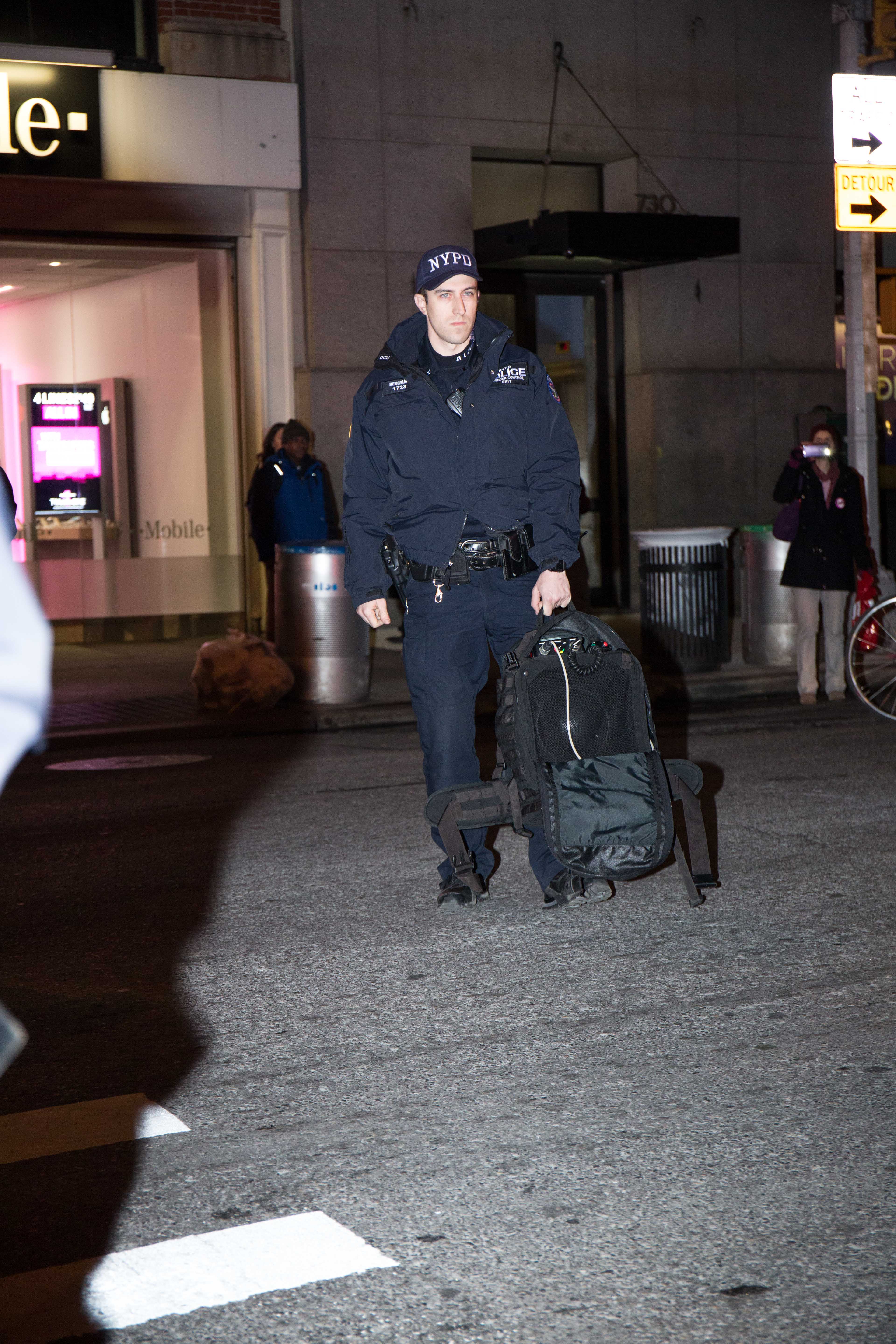 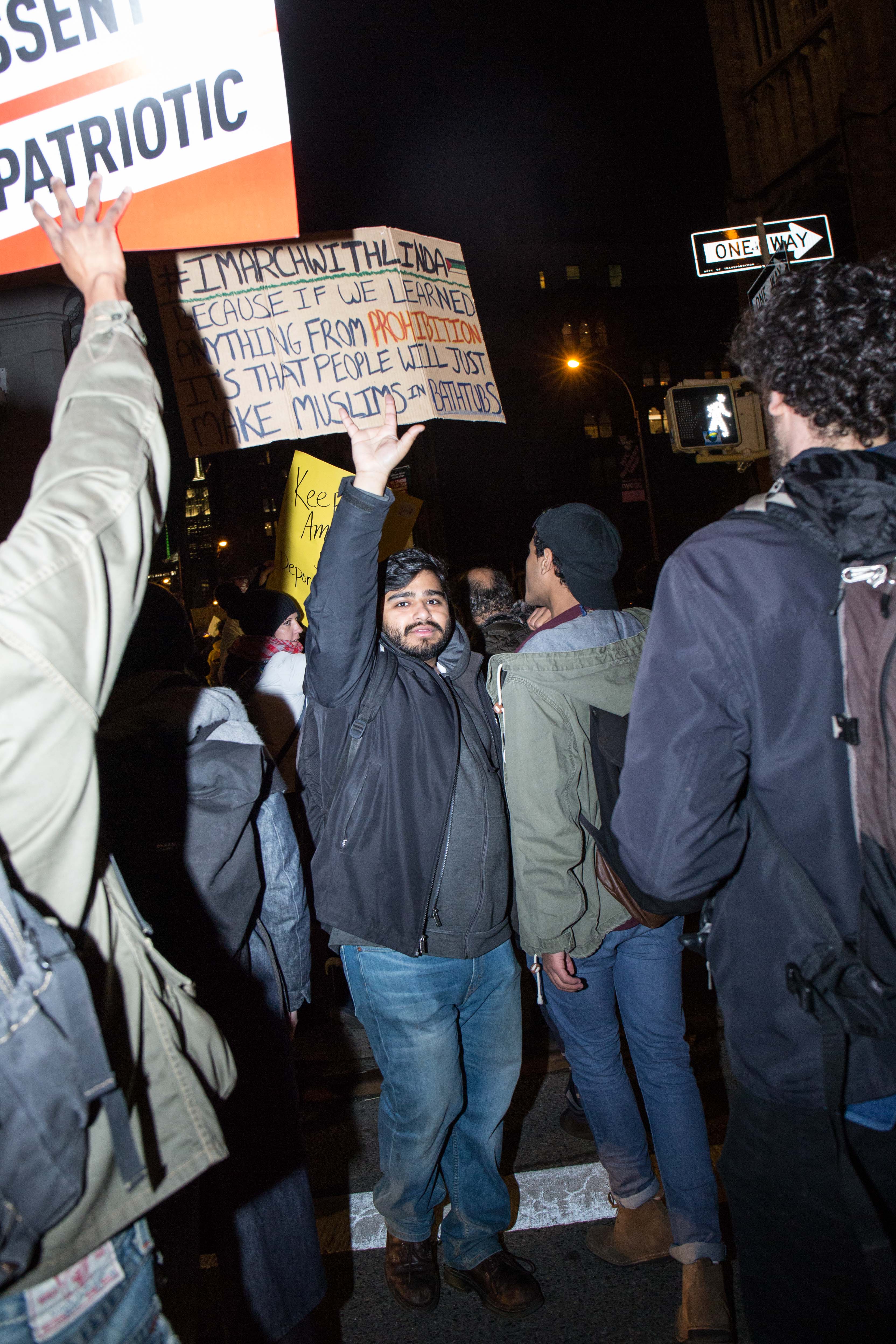 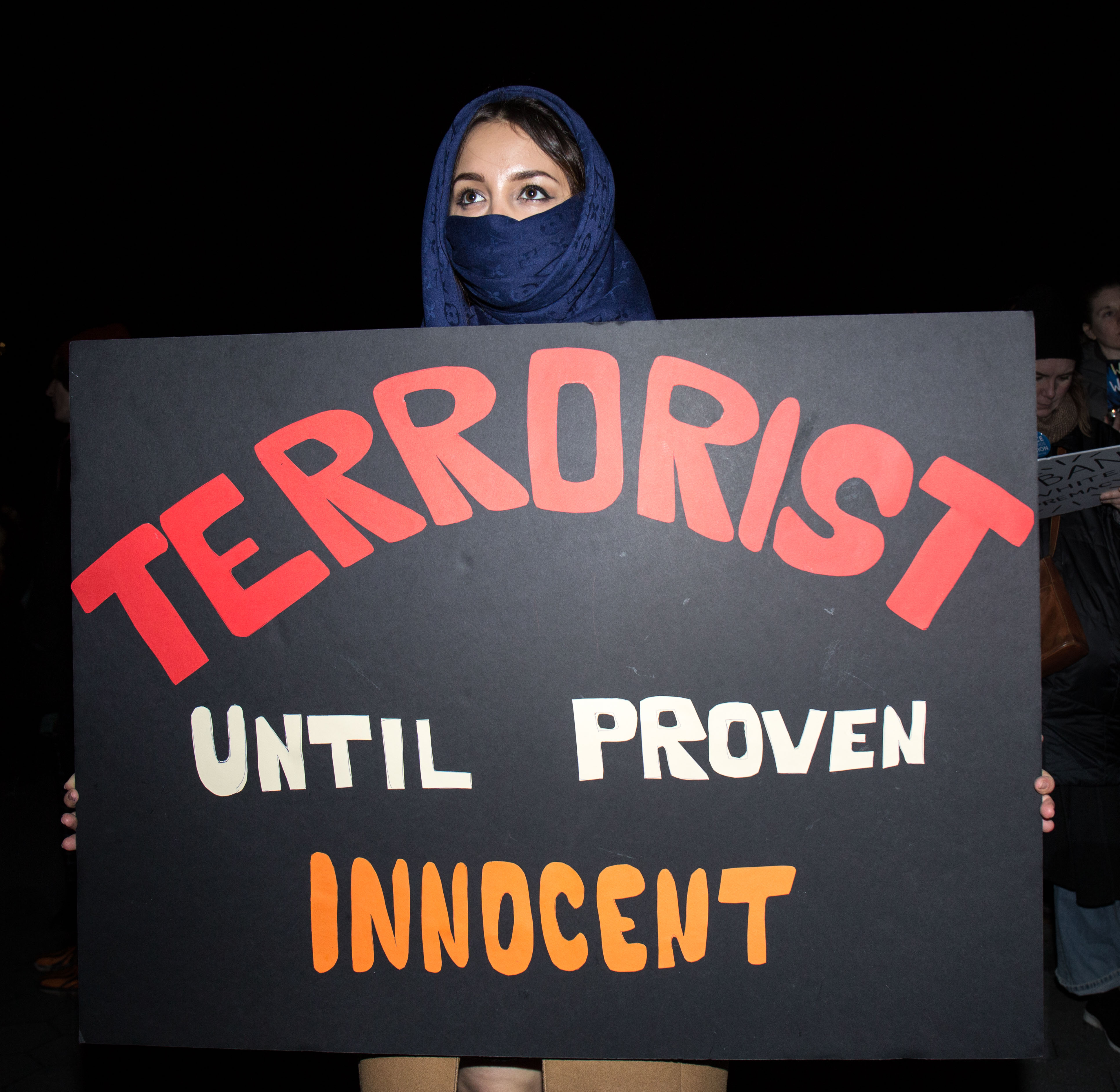 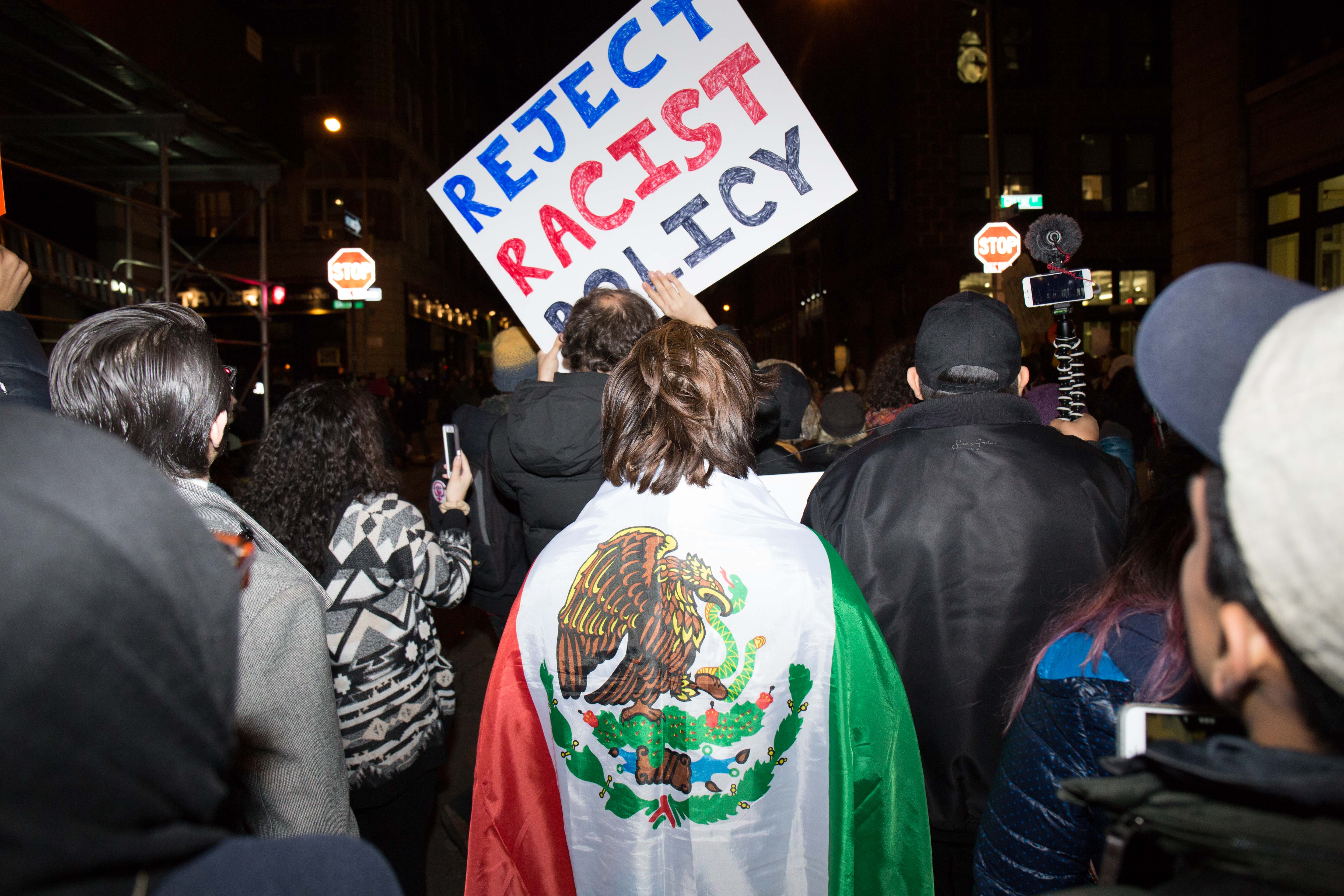 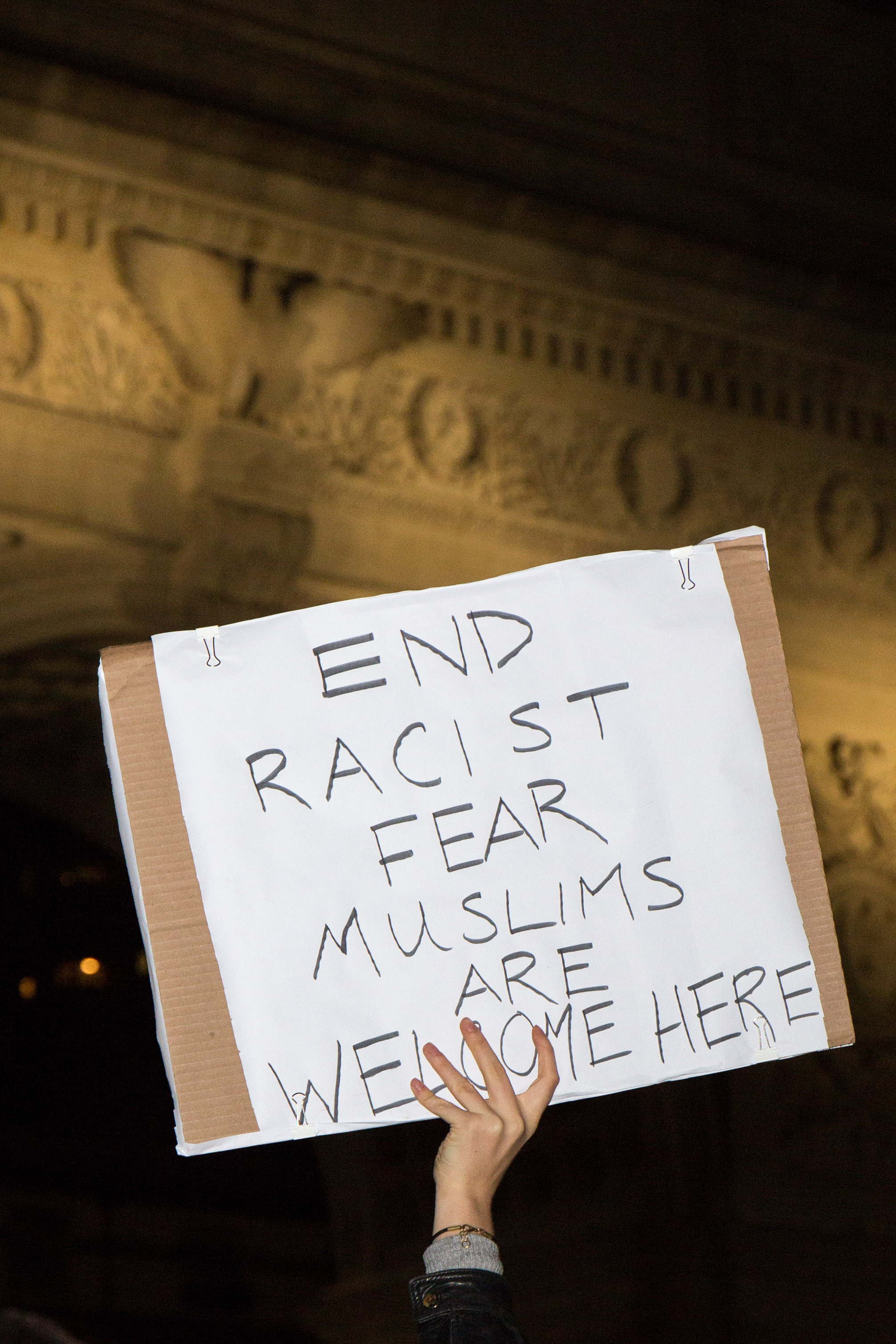 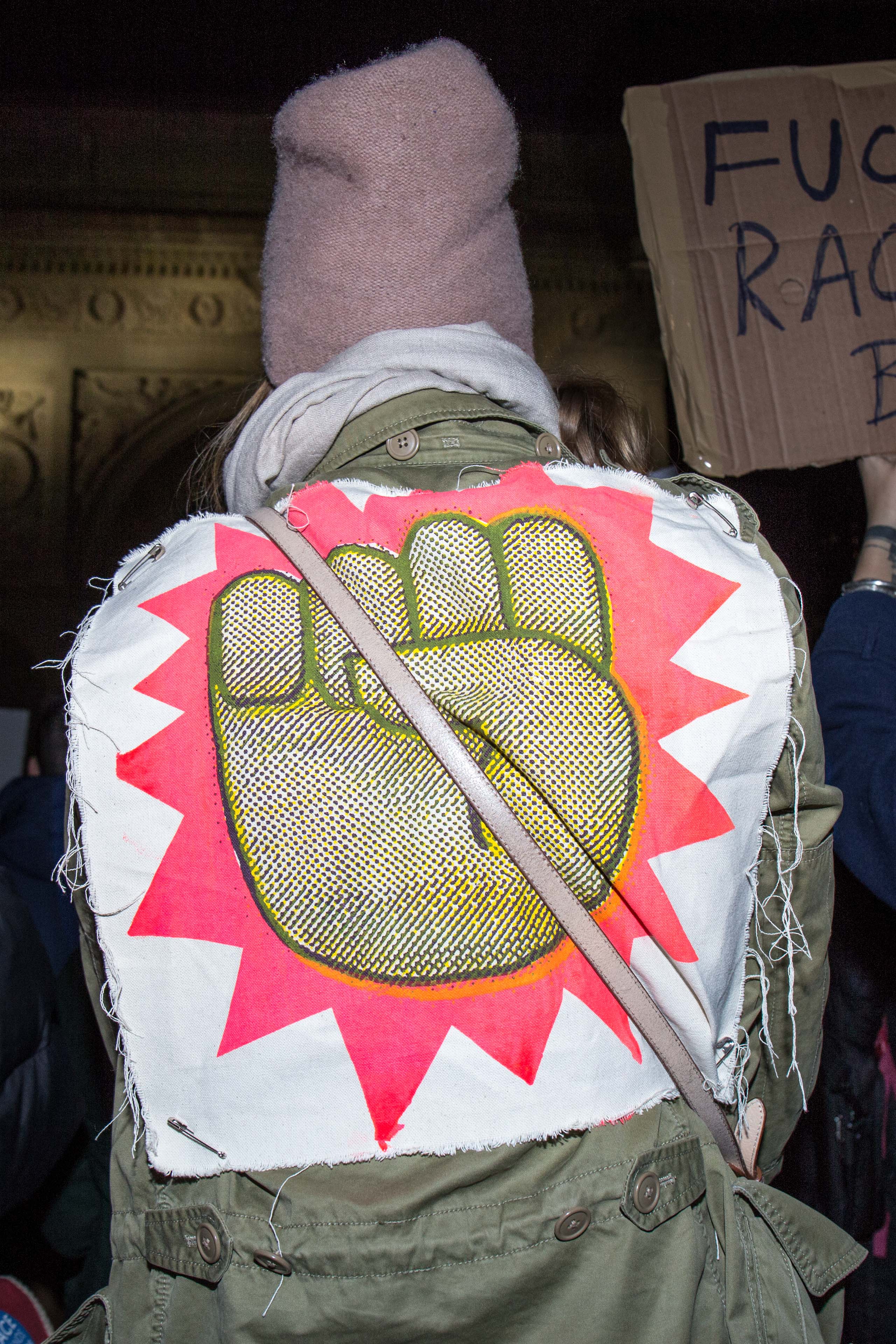 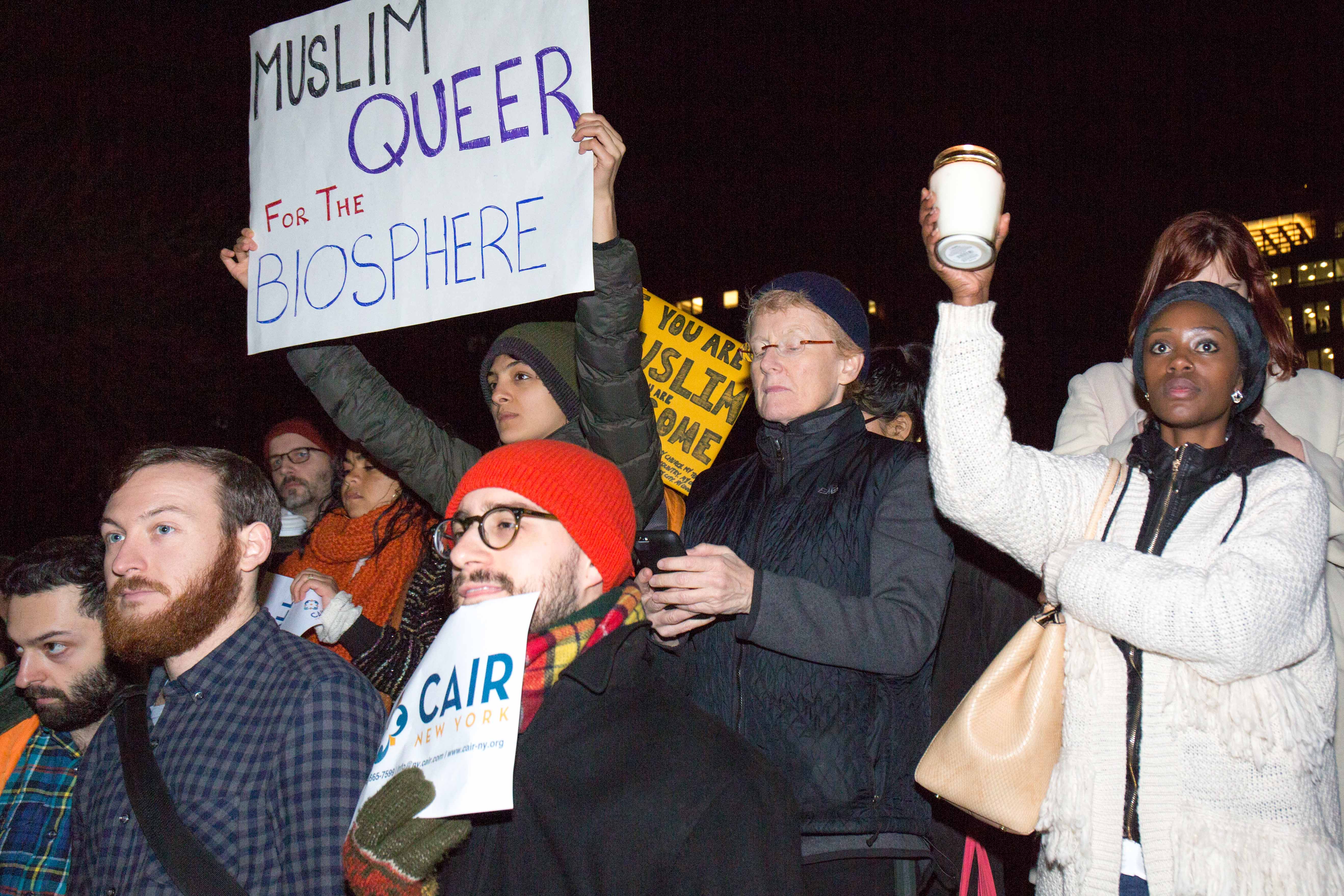 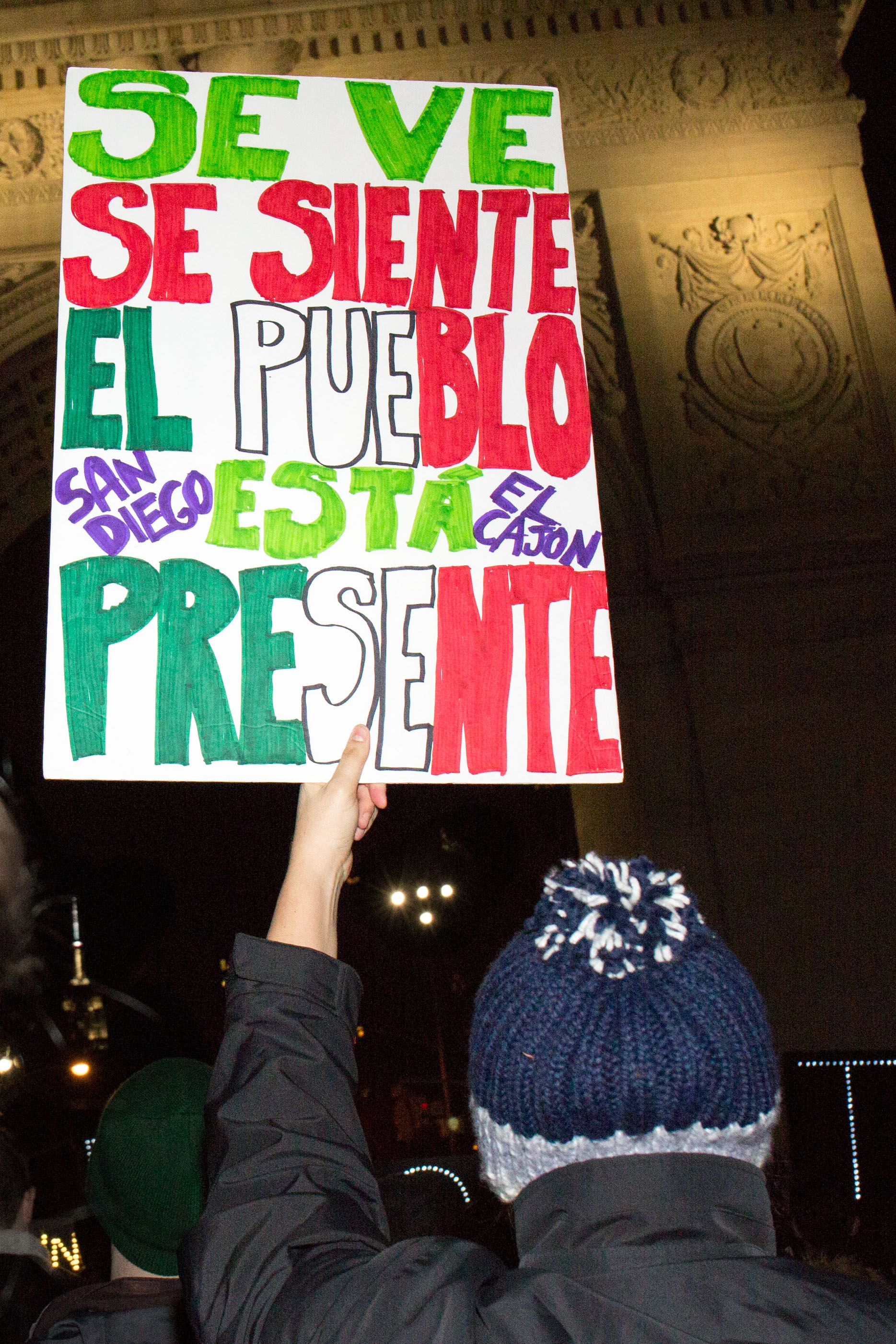 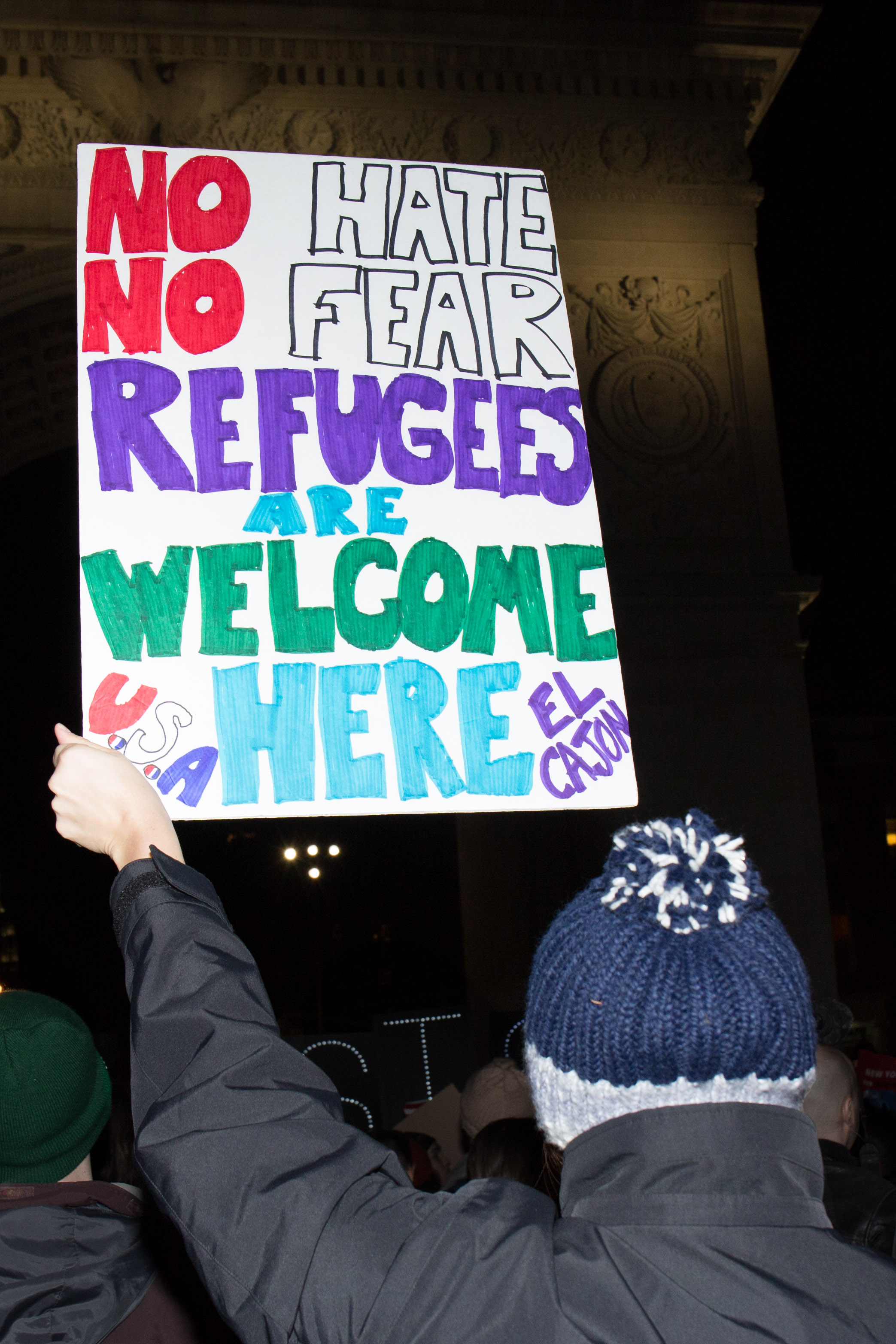