By Barbara Calderón
12.29.17
Julia Arredondo in her home in Chicago, IL. Photo by Itzel Alejandra Martinez for Remezcla

Between encouraging you to “Read. Fight. Fuck.” and to “Support Your Local Botánica” and to use love amulet pins that come in “colors of the vulvic rainbow” and contain real pubic hair, Julia Arredondo is about to become your favorite art hustler. The Tejana artist is the founder of Curandera Press and Vice Versa Press – two publishing houses that produce literature and conceptual merchandise rooted in theories of anarcho-capitalism, contemporary curanderismo, and brujería practices specific to South Texas. Despite working as a writer, poet, publisher, printmaker, and sugar baby, her work’s all interrelated – with alternative living and generational healing at the core of it all.

The merchandise she sells function as both social critiques and ceremonial remedies for dealing with contemporary issues. There’s her dressed velas that protect against student debt collectors. Many who owe a crippling amount of money also have to deal with collectors’ harassment tactics. Or her Guide to Being Alone, a zine that celebrates solitude. She wrote it for newly single people, those traveling on their own, or individuals who suddenly realize they have to cut loved ones out of their lives. There’s also the Land of the Free *Ritual* Panties, period underwear that have Trump’s face screen printed on the gusset.

“I can stand by the fact that every time I free bleed onto his face, I feel a tinge of hope that maybe this ritual will make him more aware of the rights he continues to take away from women, from people of color, from workers, from families,” Julia wrote on Instagram.

Growing up in Corpus Christi, she found herself influenced by La Reina de Tejano, Selena – despite being a punk kid with an aversion to pop music. Her Italian-American mother and Mexican-American father split during her infancy, and her adopted grandparents, Nana and Tata, raised her. From the two, who sold pottery and snowcones, she learned the art of the hustle. As a result, she’s an incredibly hard-working zinester.

In 2011, she launched Vice Versa Press, a company that her sex work has funded since 2015. Curandera Press, an online bodega, came into existence in November 2016. Since beginning these ventures – both of which she runs out of her studio in Chicago – she has published a steady stream of new zines and merchandise. She’s also constantly vending in different cities.

On the surface, some of her work – pins that say “CACA” or “Suck My Dick” – seems sarcastic. But look closer, and you’ll see how vulnerability and honesty shape her art. She’s also using this medium to draw attention to issues that don’t get mainstream attention, such as the dying out of botánicas. With her Support Your Local Botánica series, she acknowledges the sacredness – especially in gentrifying neighborhoods – of these spaces as “storefronts where commerce and spirituality coexist” and where “folk religions, queer practices, and cultural traditions are kept alive.”

Julia was raised around healers, so the idea of using spiritual protections and ritual in her work came naturally. It’s something that makes her art relatable to many of us whose ancestors have also used ritual and ceremony for generations. Whether it be about love, student debt, or good hair day luck, you can see her art as a blueprint to navigating the modern world.

Below, learn about her background, her connection to curanderismo and brujería, and how sex work has changed her art.

Editor’s note: The following interview has been lightly edited for clarity. 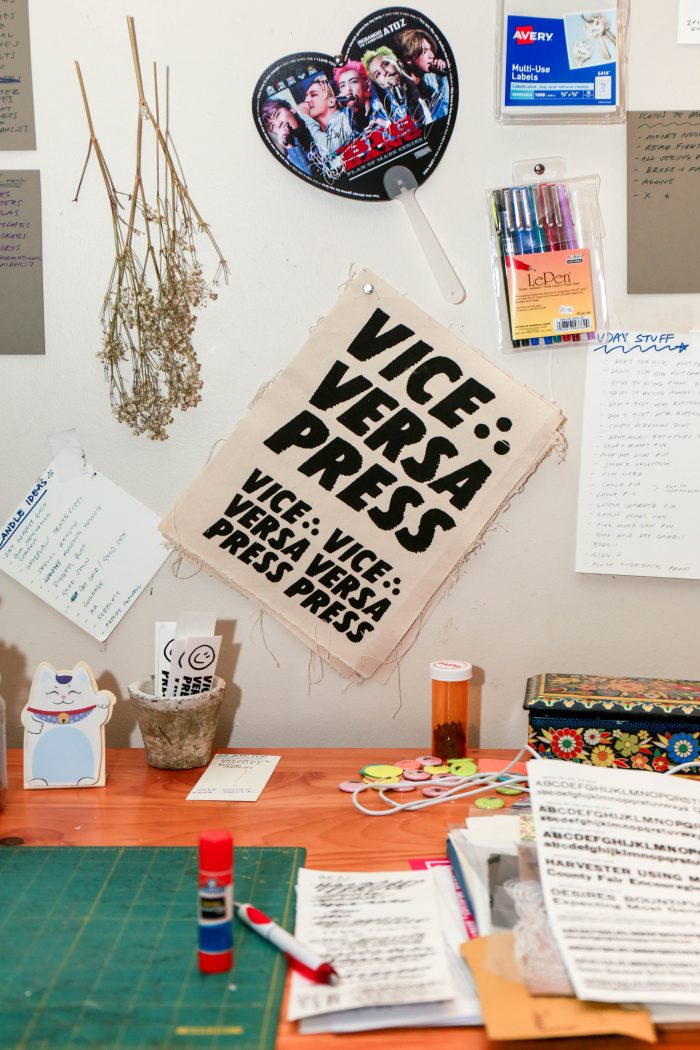 In South Texas, superstition and spirituality are manifestations rooted in the land and people, and your work references this in many ways. What’s your relationship with spirituality?

I’ve always been interested in curanderismo and brujería to some extent, but I always recognized how detrimental working with brujería can be. One of my aunties fucked with it and it fucked with her. I saw that at a young age. I didn’t feel like I was an outsider when I went to the botánicas and whenever I participated in faith. They never wanted me to feel like an outsider in those spaces. That’s what drew me to the practices so much. That’s the way I could exercise my culture without having someone tell me I didn’t belong there.

My family has these tendencies that are passed down – lineages of healing. My Grandma’s got divination through dreams, my cousin Mandy has divination through hands. They can do some healing, and that’s through my familial lineage. Also through the couple that raised me, Nana and Tata, Nana’s grandmother was a curandera. Nana was a little darker, a little more witchy, and I inadvertently picked up on those things.

This is definitely something I’m conscious of. I know I need to work within different languages to not just make things for English-speaking audiences. For me, Curandera was the entity I was able to explore my culture because when I was a kid I never felt I had the permission to. But I’m also interested in the evolution of these practices, not necessarily upholding the traditions very strictly, because I think that can be stifling to the growth of a culture.

Why do Curandera and Vice Versa Press seemingly embody similar but separate things?

My bodies of work are all so different because the faith side of my practice doesn’t really fit into the anti-Capitalist, anarcho-capitalist side. They are clashing worlds, and if they could exist harmoniously to the consumer that would be great, but the consumer does not understand that and gets confused. This is why everything is so separated.

The money noose, which started off as a symbol for student debt, has turned into how I view my lifestyle in our pursuit of financial security, you know? I’m watching my parents work for nothing in the guise of money, killing themselves. And to some extent what I’m doing with the sugar baby thing is very risky as well, so it’s just surviving. I’m trying to be smart about it. Being a sugar baby has given me time to reflect about business, and dating businessmen has given me some pretty good feedback.

How did your work become stronger after you started making stable money as a sex worker?

I guess it’s because I had the time to focus, think and devote to my practice as opposed to trying to survive. Survival will always win. You have to focus on eating and sleeping and necessities. That’s why my relationship with art is difficult. The privileged are going to have the advantage as makers of art. They have the time and resources. I appreciate being underprivileged, but I also believe you can’t kick us out. I want this and I’m going to make these sacrifices because I want to be here. I’ve been making art on little to nothing my whole life. This is the first time I’ve had some breathing room to explore and experiment.

You recently did a retail performance where you merchandise as performance. Do you feel the sugar babying sex work is an element of your practice as an artist as well?

Absolutely! Vice Versa Press has been about forming this whole business concept of retail and sex work. I’m selling countercultural products and with sex work I’m selling myself as a product. I’m thinking of marketing in various ways to earn money. I’m really interested in business as a platform for performance. What is business as performance? As consumers, we’re so used to interacting with business in a certain way, so what are the alternatives?

When did sugarbabying come into the picture?

When I moved to Chicago. After a bunch of residencies and bouncing around, I was living in an Episcopalian convent for $200 a month. I got a job getting paid $10 an hour at a flower shop when my friend Vanessa showed me this sugar baby documentary. And I’ve always been very open with my sexuality. I like sleeping with people and getting to know people on an intimate level. She was like, “You do this already. You could make money doing this.” I saw it and was like OK, so I went on some dates.

I was still living in the convent so that didn’t feel right, right? I mean I wasn’t raised Catholic and it also wasn’t a Catholic convent, but of course I didn’t tell them what was going on. I had curfew at 9 o’clock so my dates had to be during the day. There was also a learning curve. Guys know you’re new and they try to underprice you but you don’t know any better but then I found clients who I’ve built relationships with.

I know a sugar baby zine and sugar baby cleansing packs are in the works. Can you talk about those?

Whenever I go to hotels I collect the accoutrements like all the shampoos, stationery, soaps, teas, etc. I have a fucking massive collection. I’m going to rebrand each of the products and then put a zine together called Addicted to the Money. It’s going to be rebranded as bodega-style cleansing for the sugar baby who either wants to get out of the business or wants to find the more generous suitor. There will be individual packs dedicated to the sugar baby lifestyle. Everything will be based around a ritual.