Lady Dane Figueroa Edidi is a multi-talented, multi-hyphenate artist. Dane – a trans woman of Afro-Cuban, Nigerian and Indigenous descent – is an artist based in the DMV. Through her performance art and writing, Lady Dane connects trans women to life-affirming content. She also brings more nuance to the narrative that surrounds trans women of color, all the while demonstrating to the Latinx community how trans women are contributors to our collective culture.

Lady Dane – who received Latino GLBT History Project’s Mujeres en el Movimiento award and was named Ms. DC Latinx Pride 2018-2019 – centers her work around Black trans women and Indigenous communities. Born in Baltimore to a Nigerian father and Black Indigenous Cuban mother, she grew up around art. Her family made sure she understood and activism.

“I grew up in a family of artists and was raised to cultivate the artist and academic in me,” she tells me in an email. “My Aunt Jimmy and my mama would take me to all different types of shows – from opera to musical theater to church plays. My Aunt Liz was an academic, jazz singer, advocate, and the first curator of The Great Blacks In Wax Museum.”

She credits her family members – who saw the importance and impact of the intersections between art and activism – as one of the reasons she’s an artist-activist today. Dane uses several mediums to display her talent and connect with the community. She’s a dance instructor, she’s a speaker, and she’s a singer. She is also an author. She has written one screenplay, Roaring, a musical about about fictional character Diamond Malone, a famous Black trans performer on the Vaudeville circuit.

“I wanted to tell a story about a trans woman, who might have been able to do what no one imagined trans people were able to do: become a star,” Dane, who realized how few roles there were for this community, explains. Dane completed the screenplay, partnered with a musical composer, and is currently trying to get a company to workshop and produce the musical. 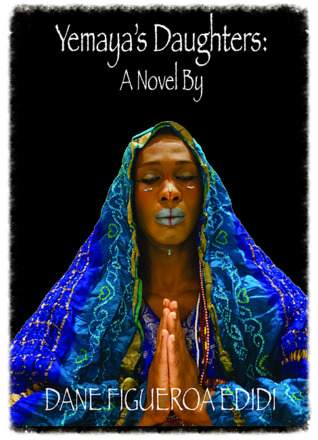 Dane has also written more than 10 books. In 2013, she published her first book, Yemaya’s Daughters. Like many of her other books, Yemaya’s Daughters features a trans protagonist, magic, spirituality, and Indigenous elements, and it also explores and criticizes the effects of colonization and how some religions have upheld white supremacy.

Dane intentionally chooses these themes because, “spirituality is deeply important in my life and because historically [speaking], Indigenous cultures from around the world not only had TGNCI [trans, gender non conforming, and intersex] people in their midst but loved us and we held positions of prominence.”

Historians have found proof that many Indigenous nations around the globe acknowledge more than two genders. In what is now present-day United States, some native tribes use two-spirit as a way to describe people that embody more than one spirit and others acknowledge up to five different genders.

Lady Dane is creating fully dimensional trans characters in a world that doesn’t typically see them in this way. For Black Trans Girls Who Gotta Cuss A Mother F***** Out When Snatching An Edge Ain’t Enough – her latest book, published in 2017 – is a celebration of trans women. Inspired by the late Ntozake Shange’s For Colored Girls Who Have Considered Suicide/When the Rainbow Is Enuf, Dane’s book similarly features Black trans women who’s turmoils, trauma, and triumphs allow them to see their complexities. 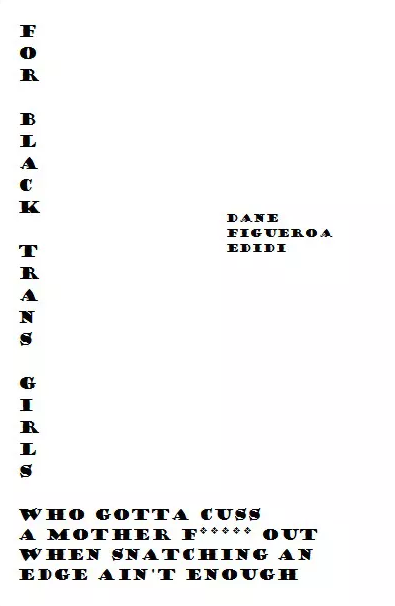 The media mostly writes about Black trans women when they’re victims of murder. 2018 was one of the deadliest year for trans women of color – most of whom were Black. And while it’s important to talk about this epidemic of violence and draw attention to the life expectancy for trans women of color, these statistics do not give insight into their lives. For Black Trans Girls tries to give us a look into the experiences of different Black trans women. “There are conversations in the book about physical transition, ritualizing transition, love, happiness, sex, family, spirituality, ancestors, choosing a name, joy, classism, racism, transphobia, anti-trans violence, colonization, abuse and much more,” Dane says.

The book is told through a series of poems, each told from the perspectives of different women, so that readers can connect with a variety of Black trans characters, so they can see themselves.

When asked what the Latinx community can do to be allies to trans women, Dane says they need to continue to “divest from anti-blackness, white supremacy, and patriarchy [because] these things are destroying this world and the reason for every oppression and form of violence we experience.”

As Lady Dane makes Black trans women the protagonists of their own stories, she envisions a bright future. “My wildest dream for my life is for me to be able to take care of those I love so that they don’t have to beg to survive,” she adds. “For everyone to be able to be free, have liberty, and justice.”