By Yara Simón
10.10.16
Photo by Itzel Alejandra Martinez for Remezcla

If this past weekend you spent even a little bit of time inside a Javits Center that seemed to be bursting at the seams with people attending New York Comic Con, it’s very likely you caught a glimpse of plenty of Harley Quinns with cotton candy-colored hair, some creative takes on Stranger Things characters, and Overwatch‘s D.Va – unfortunately mostly sans mech. It’s not really surprising, though. At one point over the last year, all of these properties blew up, so it’s only natural that plenty of cosplayers felt drawn to these characters.

As people excitedly whipped out their cameras and snapped pictures of cosplayers, those who confidently walked in full costume knew they were home. And though cosplaying provides a way for some to feel part of something larger, it’s a place that’s not always immune from some of the same prejudices faced in the real world. Over the weekend, we walked around the convention floor and talked to Latino cosplayers to learn more about their interests and experiences as cosplayers of color. For the most part, we found that the community has welcomed them, but they also acknowledged that there’s still work to be done. Here’s what they had to say in their own words:

All photos by Itzel Alejandra Martinez for Remezcla 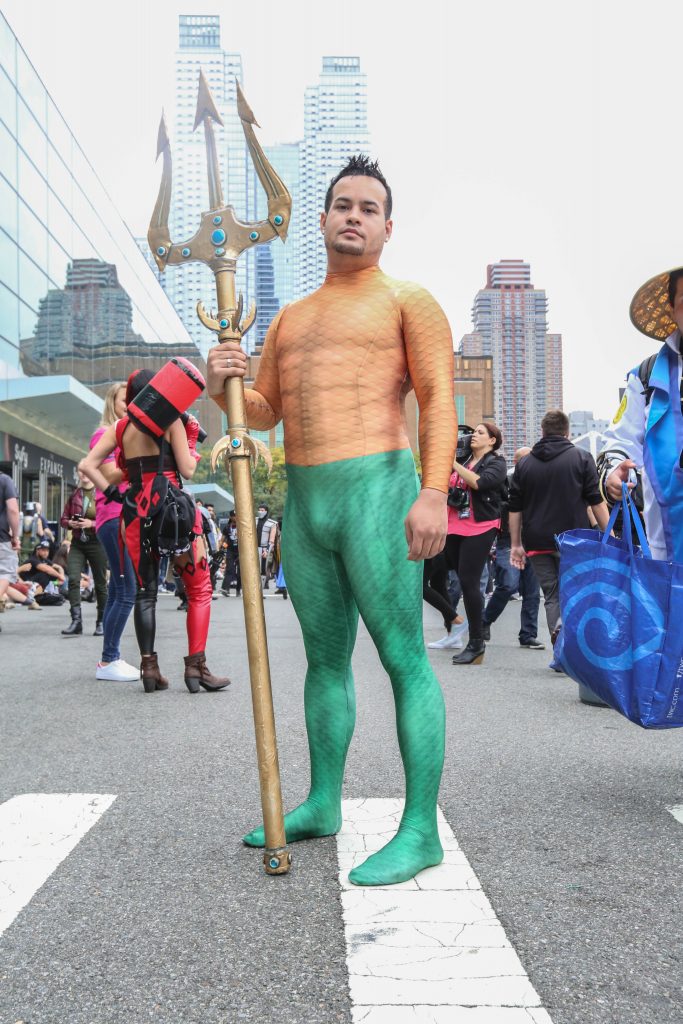 Tito Midnight as Aquaman: One of my friends invited me to a convention in Boston and I have always like Halloween, but going to the convention and seeing it to the next level and the details and stuff like that, I completely fell in love with it. I’ve definitely seen some [backlash,] it’s very sad. Not personally, but I’ve seen it. I have a friend who is also Puerto Rican who did a version of Elsa from Frozen, and you know she’s very white, blonde. She did it in her own skin with brunette hair and some people were like you know that’s not Elsa that’s not how it’s supposed to be, but she looked beautiful. She did her own version and looked amazing. 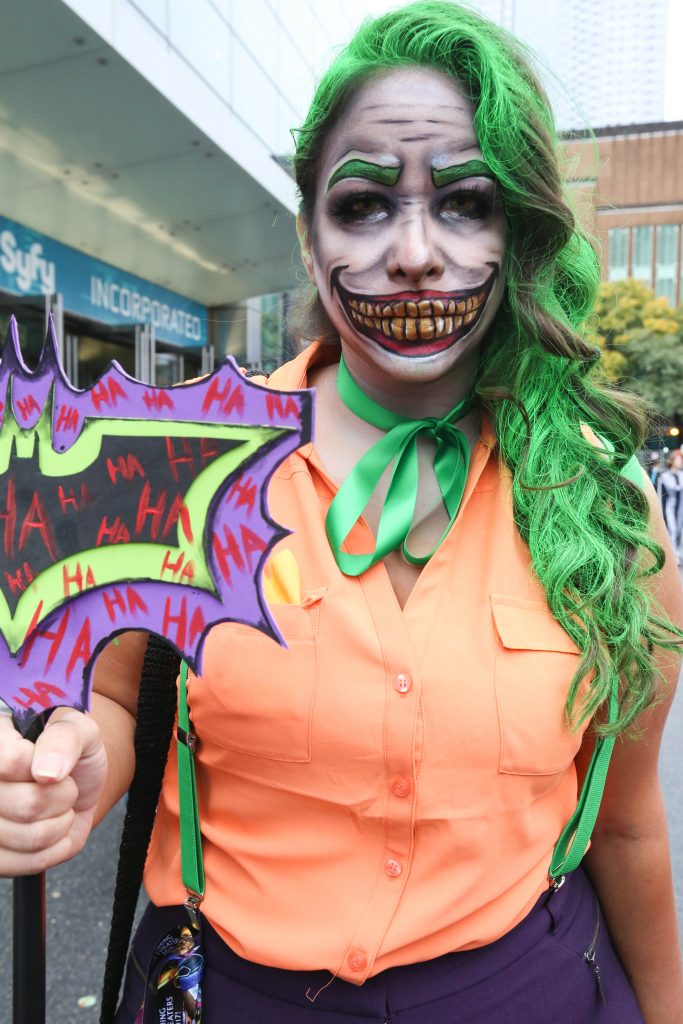 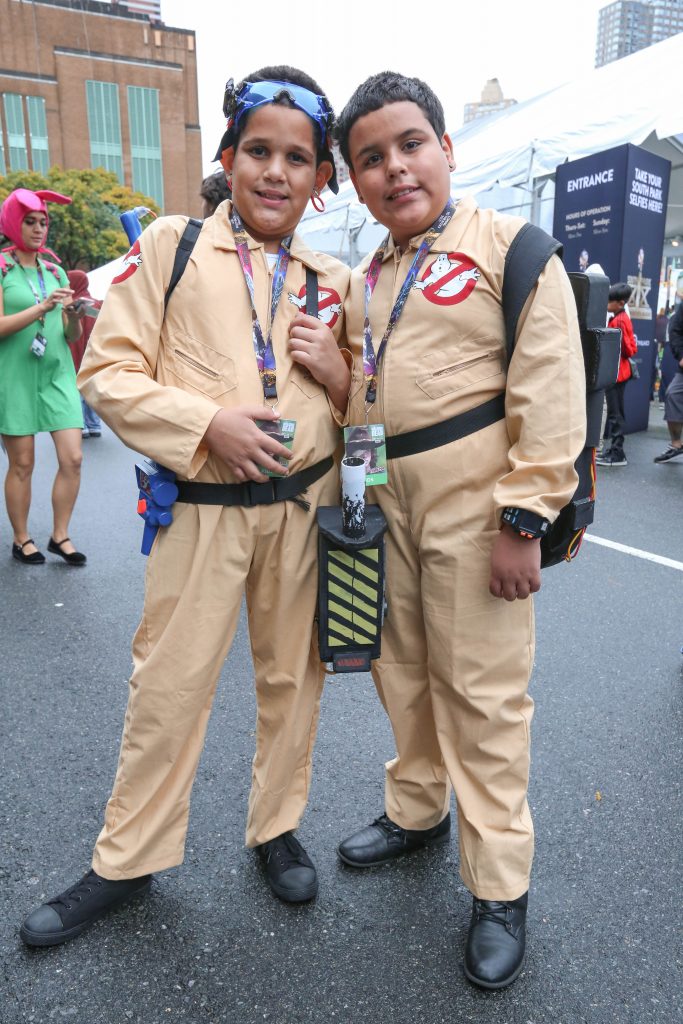 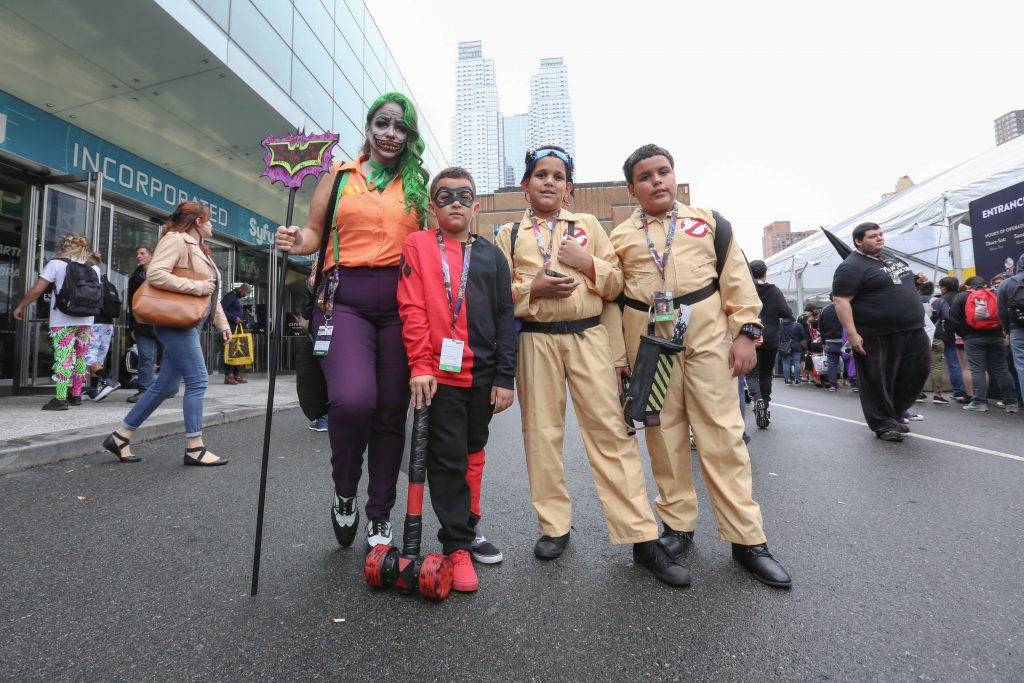 Jessica as the Joker: [Before cosplaying, I liked] makeup and dressing up for Halloween. And then I found out about this, and I was like, oh my god perfect way for me to dress up. It’s amazing. I come every year ’cause I love it. There’s a lot of people here of color who I’ve seen that they’ve been like Asian anime, and I think they still look great, like they rock it. There’s no problem with it at all. 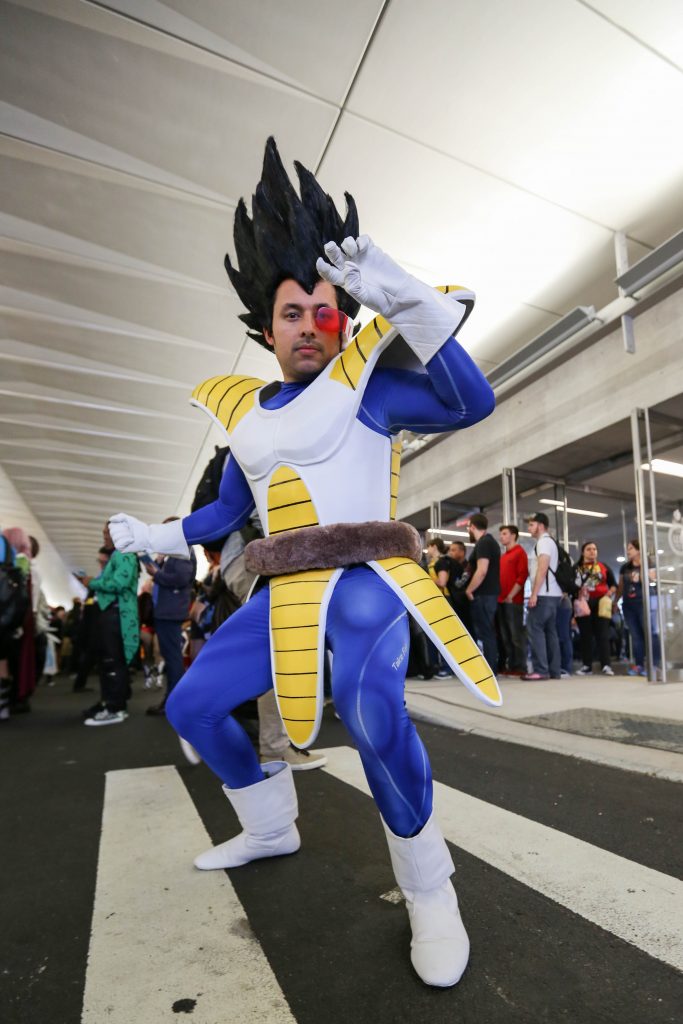 Diego Muñoz as Vegeta: It was about four years ago when I went to some cons and saw people dressing up, and I got interested so I tried to start making my own costumes. I’m all about everybody – no matter color, size, or whatever – [joining in.] You’re having fun. That’s what we’re here for. 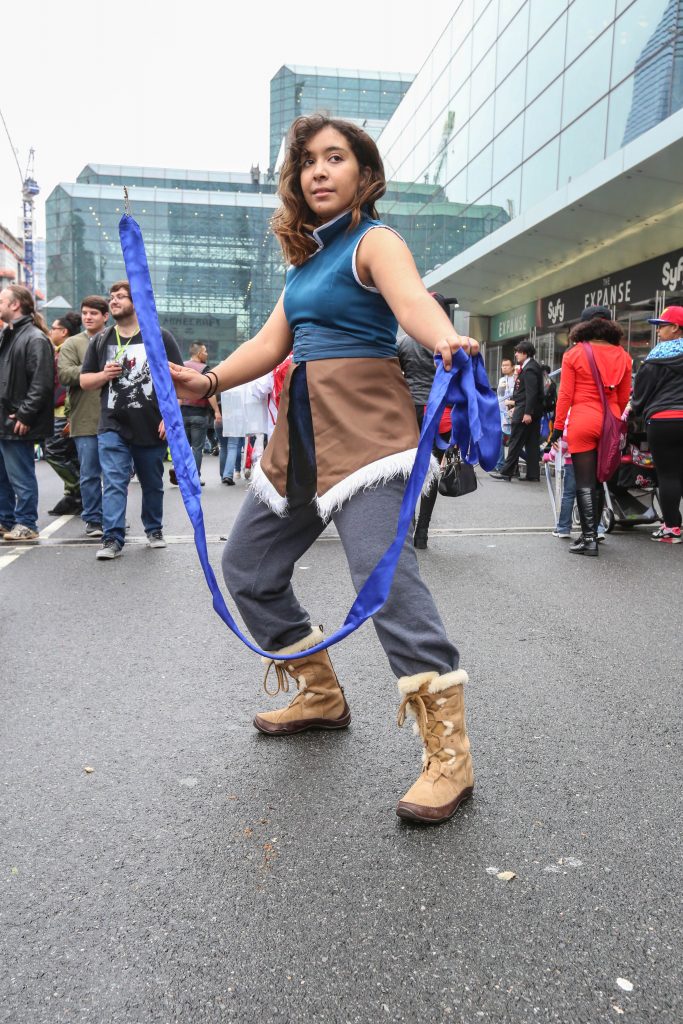 Chanelle Reyes as Korra: I guess I just really liked being a different character, like I liked being my favorite character and Korra’s my favorite character so that’s just like really happy to me to be my own character. I’ve never like experienced firsthand that tough experience, but I definitely notice that there are glances or looks that are just like disapproving. I just kind of go on with it. One thing I do want to see more of is more cosplayable characters of color. It’s hard to find a character that I can relate with, so Korra’s one of those characters, where I’m like, ‘oh my God.’ I’m really happy that she’s a character I can play off, but I really wish there were more characters out there. 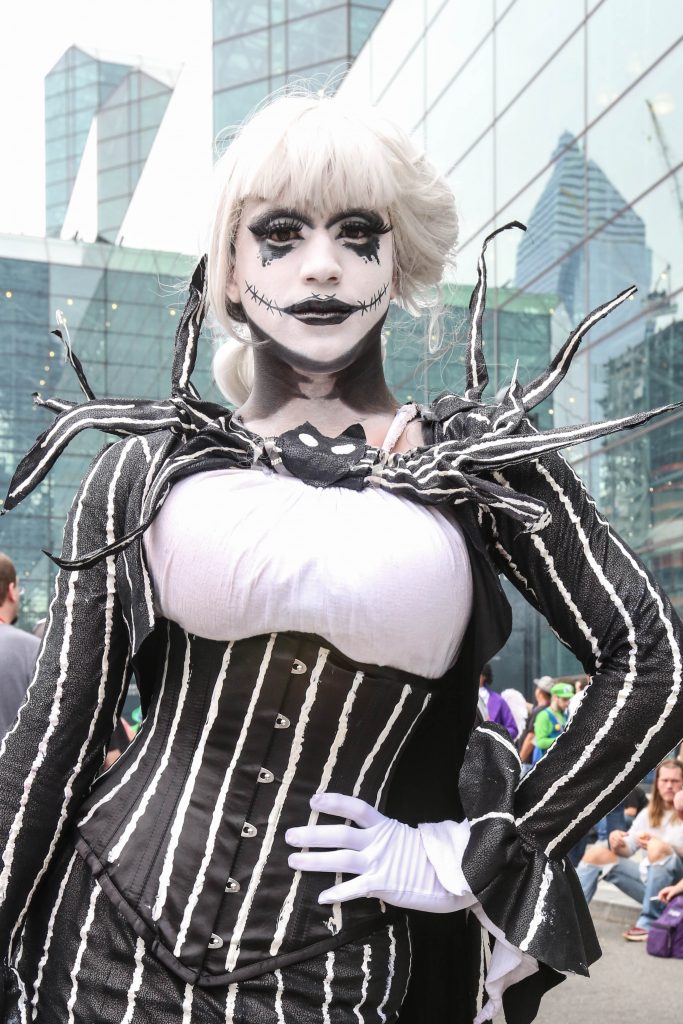 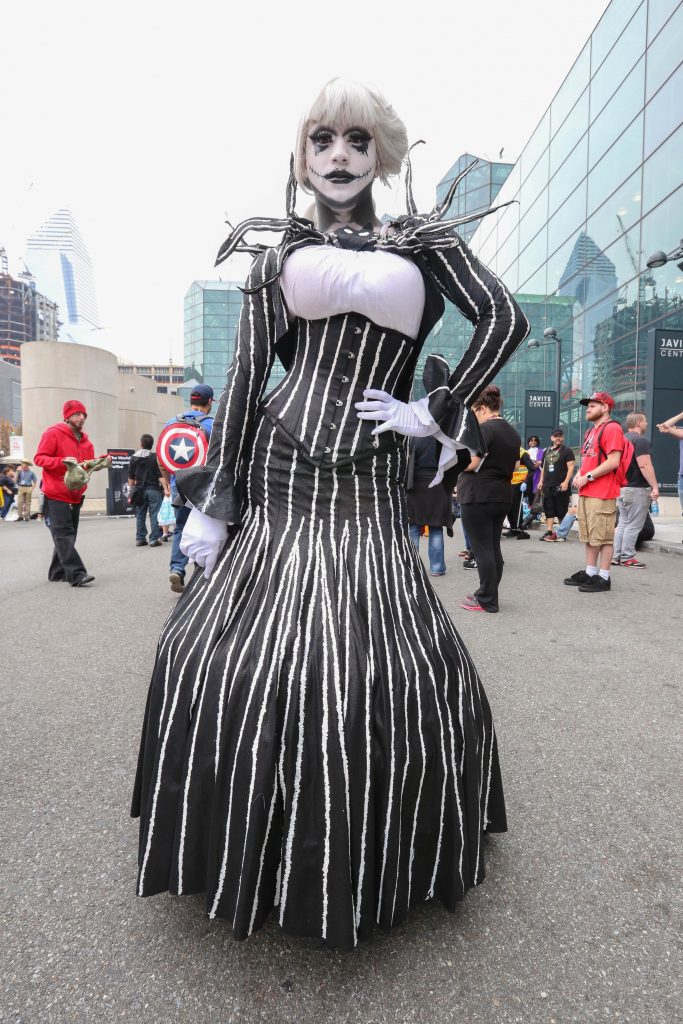 Serenity Lockheart as Jacqueline Skellington: I always love the world of geeks and, you know, nerdom. I always played video games growing up and I loved anime. Super into Pokemon, still am. I honestly wanted to be a drag queen first about five years ago and then after that I was like being just a drag queen is kind of boring, but I mixed it together with the costume world and, like, I love it. Cosplay is awesome, and I just keep going with it more and more and I keep building more and more costumes with my fiance.

I am a Latino so I’ve definitely experienced [prejudice]. As a gay man, Latino, I have several minorities, as you would say. It’s something I struggle with for, I consider this my side career so in my side career I’ve experienced it a lot. I don’t quite fit that mold that people look for, but you just keep moving forward and hopefully everyone will be accepting one day. 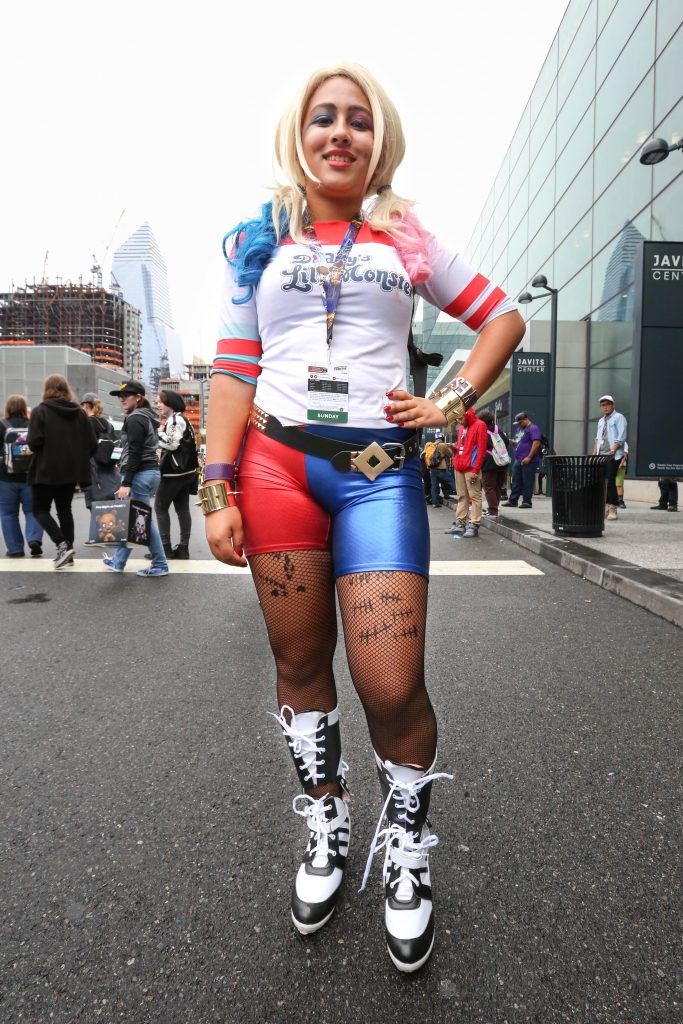 Yasmine Rivera as Harley Quinn: At first, when I first saw the suicide squad trailer I fell in love with Harley Quinn, so I started buying the costume pieces and then it all went downhill from there. I find it very accepting and a real escape for me to get away from everything real and I’m just very grateful to be a part of this community. 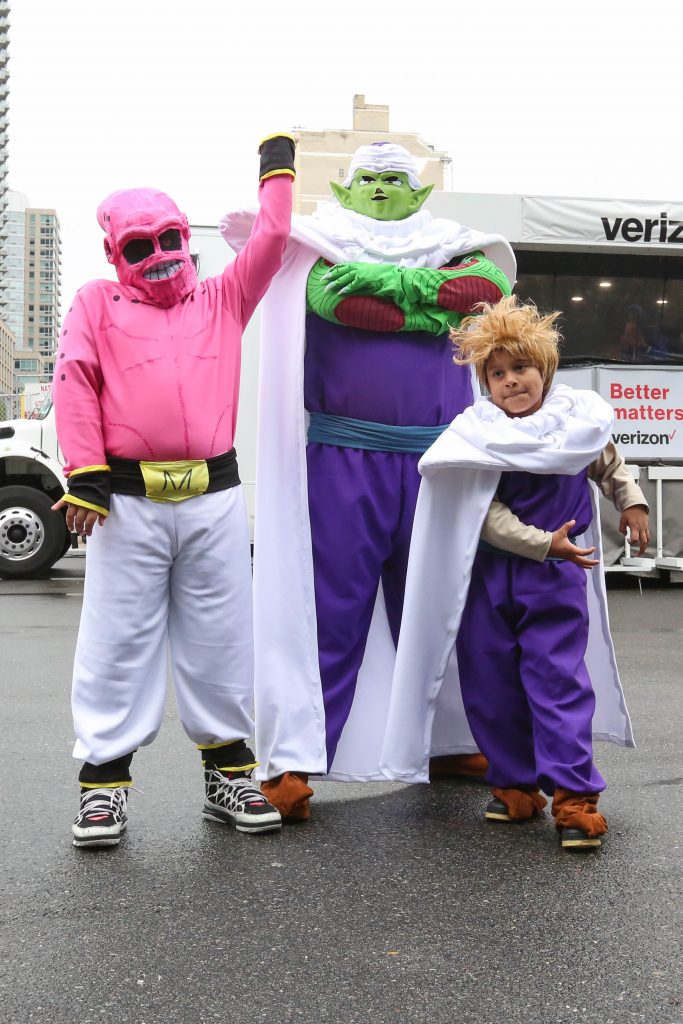 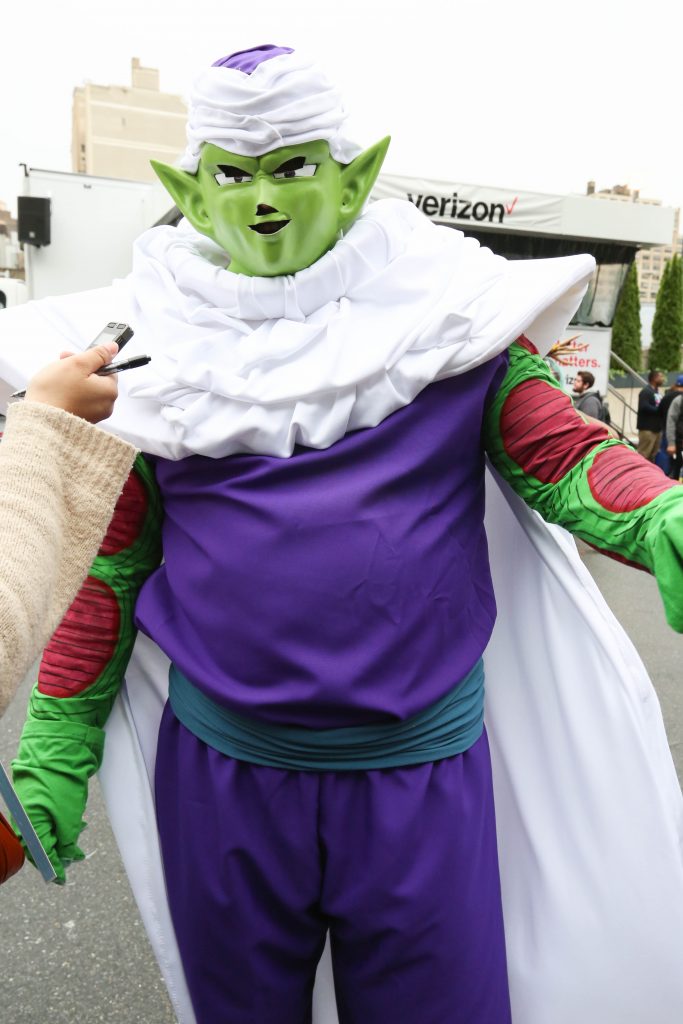 Cesar Martínez as Piccolo: “The first time I came I really liked to see people how they dressed, [and after that] I said, let’s do it!”