By Yara Simón
10.26.16
Photo by Itzel Alejandra Martinez for Remezcla

As Moongirl and Devil Dinosaur fans made their way to and from creators Amy Reede and Brandon Montclare’s tables at the Artist’s Alley during New York Comic Con, they also stopped to speak to Natacha Bustos. As the person who brought Lunella Lafayette – aka Moongirl – to life, people commissioned artwork from her or even asked her to sign their Moongirl pieces. And though Bustos took photos with women dressed up as Lunella and generally looked excited to attend one of the biggest events dedicated to comics, she admitted she couldn’t wait to interact with little girls who may one day want to work in the industry. “When I was growing up, I didn’t have a reference point,” she told me. “The only person like that was Storm in X-Men, and I was like ‘Wow, I love Storm!’ But that was it.”

This lack of representation in media was compounded by the fact that Bustos was the only person of color in her Spanish town, Torremolinos. Bustos’ father is Chilean, and her mother is Afro-Brazilian. Though born and raised in Spain like her classmates,  they bullied her because she didn’t look like them. “It’s hard to live with that insecurity when you’re young,” she said. “I had really, really bad experiences when I was little. I can’t say I had a happy childhood.”

She actually went from one extreme to another. First, her peers picked on her. By 13, boys started to notice her. “I was no longer the girl who was different, I was like whoa, Naomi Campbell or something like that,” she added. “I went from something they didn’t like to something way too overblown, too exotic and sexualized. So that phase wasn’t great either.”

“I was so timid because people didn’t like someone different.”

The one constant she had in her life was comic books. She started with X-Men, and then dove into manga. At first, she copied the art exactly, but she eventually attempted to make her own, as a way to deal with her own reality. “I was so timid because people didn’t like someone different, so I had my own world of drawing and making my world on paper,” she said. “That’s how I developed a passion for comics.” She followed this love straight to the Universidad de Granada, where she studied fine arts and blossomed in what she called an accepting and progressive environment. By the time she received her undergraduate degree, Natacha was no longer the same shy woman who couldn’t even look people in the eyes. 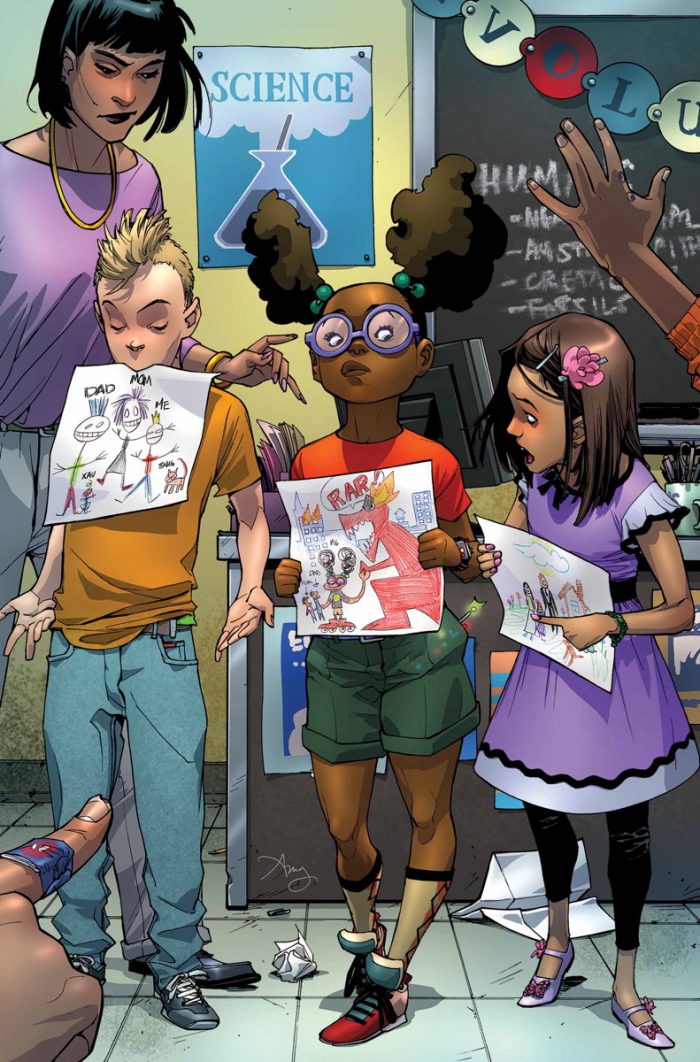 As a matter of fact, Natacha’s now actively involved in making the Spanish comic book scene more diverse. As part of Colectiva de Autora de Comics, she and other women fight gender inequality. “The collective arose to combat the lack of visibility of female comic book creators in terms of nominations for prizes, comic conventions, and in chats about comics, where it’s mostly male participation. There’s barely any women,” she said. “One of the collective’s goals is precisely to make them visible, to make female artists of today as well as those of the past – who most felt the effects – equally known. Being in the collective also helps us meet other female creators, and it promotes a positive community in a field where women are in the minority.” As someone of African descent, Natacha feels an extra responsibility to speak out.

This is why looking for young Comic Con attendees who could see themselves reflected on the pages of Moon Girl was so important for Natacha. She could have used Lunella – the brainy protagonist who her classmates bully – in her 80s childhood. But the character didn’t exist then. Instead, there was Moon Boy – who, along with Devil Dinosaur, made his first appearance in 1978. The series ends in a cliffhanger, with Devil Dinosaur entering a vortex and vowing to avenge Moon Boy’s death. This made it possible for Reede and Montclare to reinvigorate the franchise within a 2016 context. They envisioned a present-day companion for the Jack Kirby-created Devil Dinosaur. They pictured Lunella, an African-American fourth-grader from the Lower East Side.

When creating Lunella, the two immediately wanted Bustos to illustrate the new Marvel comic. Reede told io9 that the two basically “begged her,” but to hear Bustos tell it, she’s the one who excitedly jumped at the chance to work on this project. She felt a bit apprehensive at first. But just from the first bits and pieces she learned about Lunella, she knew she couldn’t pass up the opportunity.

“When Amy sent me a photo [of Lunella,] I thought, ‘It’s me!’” she said, showing me a throwback picture that practically makes her appear to be a Lunella cosplayer. “She asked me if I wanted to do it, and I said, ‘I don’t know. Give me a week.’ But then I answered her the next day. I didn’t wait at all. It’s significant to obviously have a little girl like Lunella, who is African-American and isn’t always seen in comics.”

October 28 at 5 p.m.: This post has been edited to clarify what Colectiva de Autora de Comics does.