By Raquel Reichard
09.14.17
Art by Alan López for Remezcla

In Texas, a little more than half of public school students are Latino, and most of them are of Mexican heritage. For years, educators in the state have called for high school-level curriculum on Mexican-American Studies in order to better serve these youth. In 2014, they saw a victory when the Texas State Board of Education invited publishers to submit textbooks for a special-topics social studies course on Mexican-American history and culture that schools could teach as an elective.

But the triumph was short-lived. The board only received one textbook submission: Mexican American Heritage. Experts on the topic quickly panned the book, which pages were packed with historical inaccuracies and racist portrayals. Once again, activists went to the board, this time making a case against the book. Among them was Tony Díaz, an author and college professor, who – alongside teachers, academics, students, and community organizers – led the opposition to the textbook. The board eventually unanimously rejected Mexican American Heritage in November. Almost one year later, Díaz has written and published his own textbook on the topic. Now he’s hoping the Texas State Board of Education approves it and allows it to make its way into the hands of high school students. 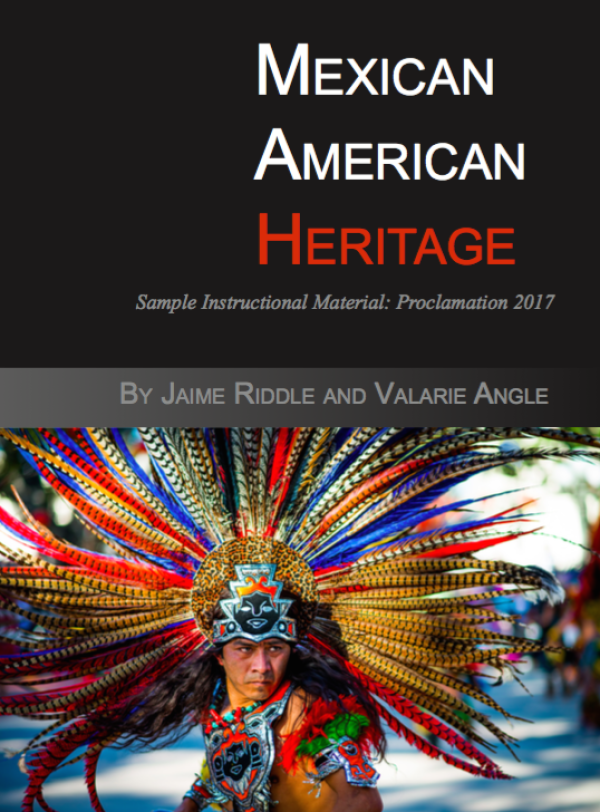 In The Mexican American Studies Toolkit, Díaz, who is the textbook’s lead editor and writer, offers about 250 pages of essays, illustrations, lessons, and quizzes on Mexican identity, indigeneity, and immigration, as well as the lost histories and cultural contributions of Mexican Americans. The book, published by Kendall Hunt, includes passages from leading ethnic studies, history and social studies scholars, and breaks down narratives and concepts through a multimedia toolkit that allows students, or general readers, to engage with the content and each other via social media.

The book has passed the state’s English Language Proficiency Standards (ELPS) and its Texas Essential Knowledge and Skills (TEKS) standards, meaning some teachers throughout the Lone Star State can already teach the The Mexican American Studies Toolkit in their classrooms. However, the Texas State Board of Education will consider it for statewide adoption in November.

“We’ve been working on the local level to get the book adopted in public schools, but there currently is not a statewide textbook dedicated to bringing culturally relevant material into the classroom,” the Houston-based Díaz tells Remezcla. “If this book is accepted, then it would be really easy for schools all over the state to find it, get it, and implement it.”

If this come to pass, it could make a difference in the lives of so many students. Research shows that ethnic studies courses are particularly beneficial to students of color. A 2016 Stanford University study revealed that students enrolled in ethnic studies miss fewer days of school, get better grades, and even graduate at higher rates.

Díaz has fought for Mexican-American Studies for a long time now. In 1998, he founded Nuestra Palabra: Latino Writers Having Their Say, a movement cultivating and promoting Latino literature and literacy. Five years ago, the group, under Díaz’s leadership, launched the Librotraficante Caravan, where itbrought Mexican-American books that had been banned under Arizona’s House Bill 2281 back to Tucson, an expedition that relaunched in June. “My parents got me an education so that I could stay out of trouble, but it ended up getting me into these controversial topics,” he quipped.

Díaz spoke with Remezcla about why he wanted to publish this textbook, how it contrasts with last year’s submission, and why it’s essential for Texas high school students to have ethnic studies courses.

Last year, you helped lead the charge against Mexican American Heritage and won. How did this inspire you to write your own textbook on the topic?

“The book, which had no Mexican or Latino writers or editors, was filled with inaccurate and racist statements.”

Years ago, returning from the Librotraficante in Tucson, we started looking at the state of Mexican-American books in Texas and realized we needed to work on curriculum here. We went to the Texas State Board of Education and asked for socially relevant materials. They made a call for submissions, and we thought that it would rain textbooks. But lo and behold, there was only one textbook submitted, Mexican American Heritage, which we quickly realized was deceptive.

The book, which had no Mexican or Latino writers or editors, was filled with inaccurate and racist statements, like the idea that Chicanos wanted to overthrow Western civilization. We, as a state, united and rejected that textbook. It was a unanimous vote from the board, which was made up of 10 Republicans and five Democrats. They united and voted this book away. That rarely happens. Something else that never happens: They reopened their call for textbooks. That’s what led to this opportunity. I thought, “Imagine if we don’t submit a book the second time around. What if the authors of the previous book simply change the title and have a ghost publisher?” So I teamed up with a mainstream publisher, and learned that the only way we can get anything done in ethnic studies in Texas is when grassroots organizers work with the institutions, and that’s what we did.

First and foremost, I’m the lead writer and editor, but I brought together other Latino scholars for this. It seems like a small issue, but it’s mind-boggling to imagine that the textbook from last year had zero Latino authors. It’s like opening a Mexican restaurant and offering all microwavable food from the supermarket. I’m also communicating with non-Latino scholars of color who have worked on textbooks about African-American Studies or Asian-American Studies, and hearing what has worked or not worked from them. Through these interactions, I learned that high school students are interested in textbooks that are filled with images, so, also unlike the textbook from last year, “The Mexican American Studies Toolkit” will have lots of photography from local and acclaimed photographers as well as illustrations. Lalo Alcaraz has even donated some of his political cartoons. It’s really exciting!

How is this textbook being received so far?

I’ve been doing a Texas tour, which is a little off track right now because of Hurricane Harvey, but the response has been very exciting. I just got back from Fort Worth and Dallas, and the reaction was powerful. Teachers want it, and students love it. It has me thinking of other textbooks to submit.

“These students need this accurate history now more than ever.”

Why is this history essential for Texas high school students to know?

Let’s say that we had not united to stop the other textbook, it would be in schools right now, in the same state debating SB4 and where students are scared about DACA going away. What if we had to add a textbook where Mexican Americans are portrayed as people trying to overthrow Western civilization? That would have only added to the horrible messages already being thrown at them about themselves. These students need this accurate history now more than ever.

But I also think witnessing this process was important for them. Through it, they are able to see and understand the process of democracy. We — activists, scholars and organizers — went to the state and worked within the system to create the change we wanted. It wasn’t easy, but it’s important. This is one of the most important educational rulings in our state for our era. We are a part of this legacy, and it’s our responsibility to pass it on.

“This is a movement worth fighting for, and not just for Latino students but all Texas students.”

From writing and editing The Mexican American Studies Toolkit, to opposing the previous textbook, to your Librotraficante Caravan, to even launching a Latino bookstore, you’re a fierce proponent of Mexican-American Studies. Why is this endeavor so important to you?

In the past, we only had our stories. And our books and history inspired us. For me, that moment wasn’t until I was a junior in college. But it shouldn’t take that long to be introduced to our stories, especially when there is evidence that culturally relevant books help students perform at higher rates. That’s powerful. In Texas, we have 5.2 million public school students, and 52 percent of them is Hispanic, but you don’t see them in the curriculum or the books. Then you wonder why students lose interest and drop out.

This is a movement worth fighting for, and not just for Latino students but all Texas students. I’m willing to work with folks, in whatever party, to talk honestly about the book, hear concerns and address them, because it’s time to unite to help Texas succeed and help young Texans succeed. I hope to continue writing textbooks, and that other Latinos and people of color do, too, so that there are so many available that it becomes unfathomable to think of a time when there wasn’t one.

Head over to the Mexican American Studies Toolkit website to read more about the textbook, preview a teacher’s kit, or order a copy.