Dismissing all data to the contrary, she determined that El Salvador had sufficiently recovered from the 2001 earthquakes that gave Salvadorans Temporary Protected Status (TPS) and that the tiny Central American country could readily receive the estimated 200,000 beneficiaries, plus their 195,000 US-born children. The announcement follows the previous unjustified decisions to end TPS protections for Haiti on July 22, 2019, Sudan on November 2, 2018, and Nicaragua on January 5, 2019.

In 2001, my birth country of El Salvador experienced two earthquakes – a month apart from each other – that utterly devastated every aspect of life in Salvadoran society. In order to help El Salvador reconstruct, the United States extended Temporary Protected Status (TPS) to undocumented Salvadorans immigrants already in the US. I was one of them. Created by Congress in the Immigration Act of 1990, the TPS program was meant for people from countries going through environmental disaster or confronting armed conflict.

While not a perfect solution (it still doesn’t provide a path to citizenship or permanent residency), TPS gave me dignity. In fact, I always thought of TPS as my greatest blessing, mi gran ámparo. It provided me with many opportunities to pursue the American Dream. From interning at the US Department of Energy when I was in high school, to working at the College of William & Mary during my undergraduate studies, TPS made the workforce accessible to me. It also allowed for me to file and pay taxes – something that I’ve done since I turned 18. Since attaining full-time employment, I have saved to purchase a home for my mother in Virginia. This is one of my most-awaited dreams: The chance to honor my mother’s sacrifice by providing her with a home that she can call her own.

Yet on January 8, the Trump Administration brought my future and my dreams to a screeching halt, stating that “based on careful consideration of available information, including recommendations received as part of an inter-agency consultation process, the Secretary determined that the original conditions caused by the 2001 earthquakes no longer exist.” But anyone who is part of the Salvadoran-American community and diaspora knows that the conditions, which render El Salvador unable to receive us, not only continue to exist but have gotten worse over the years. The severe poverty, the unrelenting gang violence, and vulnerability to natural disasters in light of climate change are still there. No amount of international aid and remittances will undo, repair, and heal the collective damage of the 2001 earthquakes, which took place at a time when Salvadoran society had barely started to heal from its 12-year civil war – a war, which is necessary to note, where 85 percent of the violence was perpetrated by US-financed government paramilitaries, death squads, and army units, as noted in Juan Gonzalez’s 2000 edition of Harvest of Empire: A History of Latinos. 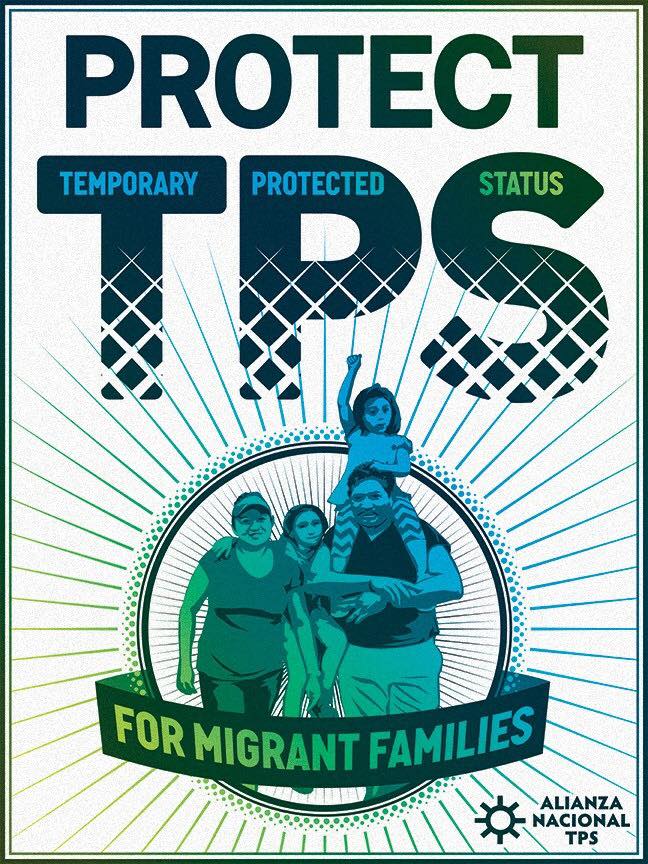 To add insult to injury, Salvadorans with TPS will be required to re-register for TPS and apply for Employment Authorization Documents until the termination date of September 9, 2019. Assuming prices don’t change, this means I will have to pay $495 as soon as DHS announces the re-registration period in the Federal Register notice (Fun fact: The DHS does not accept credit card for TPS Forms – only cash in form of a money order or cashier’s check.) Here’s some quick math: 200,000 TPS beneficiaries x $495 fee = $99,000,000. This is the approximate amount TPS beneficiaries will pay to the US government for the privilege of working for a year before they’re expected to return to El Salvador either through self-deportation or through the systemic incarceration-and-deportation machine as enforced by the evil that is ICE.

Truly, the only dignified solution to our predicament is legislation that would allow all Black, Latinx, and Asian TPS beneficiaries to become legal permanent residents. At present, the bills that would accomplish this are the American Promise Act of 2017 (H.R. 4253) and the SECURE Act (S. 2144). The others, ESPERER Act of 2017 and ASPIRE TPS Act 2017, with the ESPERER Act of 2017 failing to cover all TPS-designated countries: only Haiti, El Salvador, Honduras and Nicaragua. And the ASPIRE TPS Act 2017 only leads to permanent residency only if the person shows “extreme hardship.” If you’ve ever dealt with the US’ immigration system, you know extreme hardship is not easy to prove. Yet by definition, all TPS beneficiaries would encounter extreme hardship if they were to return to countries wrecked by natural disasters and civil wars.

As of now, my future is uncertain and my present footing a painful affair. One of the reasons why the end of TPS is difficult on me is because I don’t want to be separated from my community in Virginia and DC. Leaving the US means leaving them. At home, things are quiet. My family and I aren’t yet ready to talk about our options. It’s hard to emotionally support them when I am still processing the implications of this decision myself. Yet, I’m determined to get back on my feet and keep up with the fight to demand a comprehensive immigration reform that benefits all immigrants.

TPS recipients spent the better part of 2017 fighting for their rights, but their stories didn’t garner the same national attention as the struggle for the Deferred Action for Childhood Arrivals (DACA) program – something that initially made me feel invisible within #TheResistance. But now, we need everyone to raise their voices along with us. As the old labor saying goes “An injury to one is an injury to all” because solidarity cannot be optional in the age of Trump. #ProtectTPS is not just an issue that merely affects Latinx communities. There are Black and Asian TPS beneficiaries whose stories are often left out of our advocacy and activism efforts. Syria, Nepal, Honduras, Yemen, Somalia, and South Sudan have not yet lost their TPS. But they are next, and we cannot forget them in our advocacy.

I might have only 18 months to go. But I intend to make them count.

Editor’s Note: This is just one of hundreds of thousands TPS stories. The author of this piece does not intend to speak for all of them.