Arturo Castro is ready for audiences around the world to see what he’s capable of. You may know him as the very funny and fabulous Jaime in Broad City and may have been one of the handful of people to see his dramatic turn in Ang Lee’s Billy Lynn’s Long Halftime Walk. But after you catch season three of Narcos, we’re sure you won’t be able to think of the Guatemalan actor the same way again. As he told Remezcla, “I want every time you see my name to see it associated with a good project, whether it’s drama or comedy.” After years of pounding the pavement in New York City, he has no plans of slowing down. If he has his way, audiences who have also followed his web-series Alternatino, a sketch show about contemporary Latinidad, will soon get to see it become a full-fledged show on Comedy Central.

Castro came to visit the Remezcla office ahead of the Narcos season 3 premiere, and sat down with our very own Editor-in-Chief, Andrea Gompf. They talked about his desire to not be pigeonholed, his return to Broad City, and why accents can be a tricky thing to master while shooting in Colombia. Take a look at some highlights from their chat below.

On Turning His Alternatino Web Series into a TV Show

After we shoot the pilot, and [Comedy Central] has 3 or 4 months to approve it – and then we would shoot a 10-episode first season. But it’s exciting because especially right now we get to control the narrative of who we are. For example, I’m shooting a show like Narcos where we’re playing violent drug dealers but that’s historical. We’re actually playing people who actually exist. And it’s part of our culture that we shouldn’t forget so we don’t repeat it. But through Alternatino I want to show this other side of it. I told the writers, just for the fact that I’m in the show, it’s already Latino. We don’t have to hit it on the hammer. Latinos are all shapes and sizes and that’s what kind of what we want to do with the show! I really want to bring in more diverse voices once we assemble our writer room. Right now—and I love them—but it’s got too many white guys. And I feel they’re sometimes scared of offending me. I’m like “pitch me something about what people say about Latinos!” I also want a strong team of voices in the room. I grew up with women, and everyone who’s ever given me a shot has been a woman, including the producer from Narcos, Jesse Moore. She was my champion from the beginning. And she was really encouraging in the process. Because it was the first time I had to play a man and not a boy.

How He Nabbed His Role on Narcos

Nine years ago, more or less, I didn’t have a penny to my name but I shot this student film for NYU. And the D.P. and I got along really well and became friends. The film was small but it made a good impression on people. I played an immigrant – of course! That was the only role I got to play at the beginning of my career. Him and I stayed in touch. He shot this very cool film called Manos sucias. I helped him do some of the camera tests. Flash forward 9 years and I sent my tape in to Narcos. First of all, I’m a huge fucking fan of the show. And my agent sent it over and I gotta tell, I was upset that I wasn’t getting seen for it. Because I heard about all these other guys who had gone in for it. I had a come to Jesús moment. “God. Get me a fucking audition. That’s all I need.” So they sent me an audition and the producers really liked it, and they were sending it around to the higher-ups and one of the people they sent it to was this D.P., Josef Wladyka, who was my friend who was like, “No way! You have to give him a job!” And it started as this smaller role but then something happened with one of the actors and my role just started growing.

On What Narcos Means for His Career

I hadn’t acted in Spanish in years! I came up as a dramatic actor, but most people know me for my comedy, and hopefully this will open the doors for more of that. And then there’s such exciting filmmakers in Latin America – if there’s a project that’s right I’ll totally jump on board! What I would like more than anything is to be able to do a film – I hate it when there’s a film set in Mexico but they have speak English with an accent, to make people believe you’re speaking Spanish. What Narcos is doing and what I would like to do is a film that’s completely bilingual. And that it’s a complete success. That would be cool!

On Being Fine About Having an OK-ish Caleño Accent

I met this guy from Cali. The Cali accent and the Guatemalan accent is very similar. A lot of Spanish-speaking people have problems with these accents. So I interviewed this guy from Cali – the problem was that he has a really deep voice. So the first couple of times I just kept imitating his accent – in that low register. We did a couple of takes and then they’re all like “Arturo, what’s with the fucking voice?” But that’s how I learned it! Then I managed to get my normal tone of voice with the accent. I tried to be true to it but halfway into the first episode I was like, ‘This guy is really fucking good! He’s a really good actor and it became more about the environment and the story than the accent.’ People will forgive certain slights. It’s important to have a successful bilingual show that people in the English-speaking world are really interested in. So even though you should be true to the accent, what I’m saying is that it’s important for other shows that this successful bilingual show is happening.

On the Cultural Melting Pot That Is the Narcos Set

You have Latin Americans. You have Spaniards. And I get to know these cultures. I was a Guatemalan who was always looking North. But we have a lot of similarities. It was great to explore that. Michael Stahl-David – he plays one of the new DEA guys. He became fluent in Spanish. He saw more of Colombia than I think a lot of Colombians! He’d go off to the hills and go birdwatching. He explored all of Colombia. He took salsa lessons. The dude was set! We had another DEA agents, Matt Whelan, sweetest guy who learned he doesn’t like plantains and how to dance salsa. He learned how to deepen his voice when he tried to speak Spanish. I only taught him “Pásame la sal.” And, “Tu madre.” But the set was also very American in a way. Everybody speaks English. The local crew, most of them do too. It was a weird experience because I got to speak English and Spanish. It was like the perfect combination of both for me.

On What to Expect From Broad City Season 4

There is no specific storyline about what it means to be Latino in today’s America. But there are definitely jokes that hint at it. Like, he’s trying not to get aroused and he starts listing off names of politicians he doesn’t like. Broad City, to its great credit, has found a way to be subversive and true to itself while still keeping the comedy intact. These girls even got in a wink at Narcos, telling me in one scene “You look like a Colombian druglord” – I really wanted to turn to the camera but it’ll be a nice wink. The writing this season is fantastic. And Abi and Ilana are directing for the first time!

On Staying Hungry as an Actor

Billy Lynn taught me a huge lesson. Here was a film that had everything going for it and it just didn’t take with audiences the way we hoped it would. And Snatched got really bad reviews even though I thought it was a really funny film! I was concerned, but then I watched it and it was really fucking funny! I’ve tried to learn to just enjoy the process. And not on the result. Because I can’t take anything for granted. I mean, how many times can people go, ‘Okay, this one is it! This is it!’ I don’t have it in me to chill. Because I hustled for so long! You never losing that feeling of barely holding on, I think. Once you’ve been a really hungry actor for a long time, it doesn’t really leave you. So even now that I’m coming up, I hope that I never lose that feeling of wanting to fight for it and be down in the trenches.

On People Whose Careers He Admires

I’d love to have, in the grand scheme of things, a career like Mark Wahlberg’s. Doing blockbusters, but also director-driven scripts. He’s also a really incredibly talented producer. Every time you see Mark Wahlberg project, you know it’s a good project even if he’s not attached to star. Like Entourage – it was like eating popcorn but he really has a good eye for quality. Oscar Isaac also comes to mind. But role models for me? I don’t see a guy and go like, ‘Oh his!’ And not because I think I’m the shit but because the thing I’m trying to create is very personal and individual to me. So if anything, I’m just trying to be the best version of myself.

I can’t just be an actor. It has to turn into something else. That’s the thing about Narcos… [it] will give me the visibility in Guatemala that I’ll need eventually to go and change this. Chasing fame for fame’s sake is empty. But if you use the spotlight to shine it on things you care about – if you leave the world better than we you find it, that means something. It’s legendary. Like, a few years ago, they had Latin American Idol. And Guatemala won one year! And it was great. There was this swell of pride and crime went down. People were really proud of that. They wanted to make their country be better. The problem with something like Latin American Idol is that it’s fickle. It’s over, and it’s a competition. But if you can create a long-lasting and achievement-based, something or a product or a person who you can look up to and be like “Yeah, that’s my boy! He’s from Guatemala.” Because people didn’t know about Guatemala when I first moved here. So I want to be that and also eventually I want to create the Alternatino Foundation, for gifted Latino kids. I believe Guatemala and a lot of places in Latin America are mines of talent! But they’re worried about getting food to eat or be safe in the streets. If you can create an after-school program and fund it privately, with really good teachers – I mean, if I manage to do that, I swear to god, just know that that’ll be it! I mean, Oscars and stuff is really cool, but I want to keep telling stories for the rest of my life. But if I can change lives? That’s it. 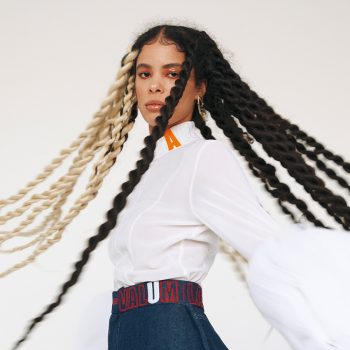