After Months Off the Air, Telemundo's 'Caso Cerrado' Returns to TV
Search
Film

After Months Off the Air, ‘Caso Cerrado’ Returns to TV With Its Gloriously Messy Drama

Like most children of immigrants, I spent a lot of time watching telenovelas with my mami and abuelos growing up. As many also know, en la casa de mami, you never touch the TV. Never. So, that meant watching other shows like Cristina, El Gordo y La Flaca, or, my abuelita’s favorite, Caso Cerrado con Dra. Ana Maria Polo.

Caso Cerrado has been a staple on Telemundo since 2002. Many of us US-born Latinos grew up with the show playing in the background as we did our homework or as our abuela made dinner – and so, many us were shocked when Telemundo abruptly took the program off the air last summer, after it was announced that the former executive producer of the program, Marlene Kay, had filed a lawsuit for more than $2 million against Dra. Ana Maria Polo. While the fate of the show remained uncertain for months, it has now made a triumphant return to television with its new season debuting last week. And sixteen years since its debut, a new generation has found the popular L.A.-based reality show on YouTube, where it has over 4.4 million subscribers.

“I think I’ve always had young viewers. I’ve met people who say, ‘You know, I grew up with you. I watched you since I was seven, eight, nine, 10, and I’m now 20, 30, whatever’,” says Dra. Ana Maria Polo, a real attorney who plays herself, as the judge in the cases presented on the show. “This show really is for young people. The older crowd enjoys it because they see part of their life reflected or, a modern life, that they may not know completely, reflected in there. I want people to think. I want to provoke them to think before they act. It’s really for the younger crowd, you know?”

But while older audiences of the show may be more credulous watchers, a younger generation comes to the show with a fair dose of skepticism about the outrageous cases presented. The scenarios Dr. Ana Maria Polo presides over have become increasingly bizarre over the years – so much so, that Mitú once playfully created a quiz titled “Can You Guess Whether These Ridiculous Caso Cerrado Episodes Are Real or Not?” that is surprisingly tough to ace. Did you think “I Ate My Brother’s Testicles…For Dinner” couldn’t possibly be a real episode? Or that “Smelling Used Condoms Helps Reduce My Craving for Cigarettes” is a subject that seems to have no place in a court of law? Think again – both have aired on Caso Cerrado. 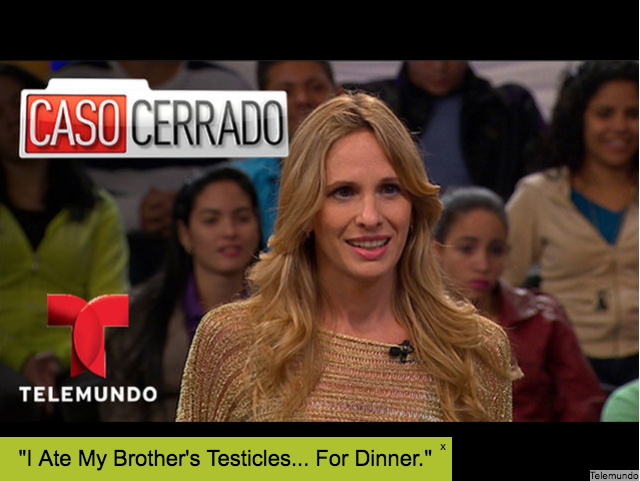 Still, the wild scenarios and occasionally stilted acting don’t detract from the deliciously scandalous fun. And Dra. Polo says she has never misled audiences about the reality of the cases.“Every case is real,” she insists. “The people who are on [the show] however, may not necessarily be the participants of the real case.” As far as the outlandish nature of some of the cases presented – ones which we’d normally never imagine seeing in a courtroom – Dra. Polo explains: “I’ve always been very clear, so this is not going to be a surprise to anybody at all, this is a hybrid show because this is a voluntary show. People come here voluntarily. I can not force people to come in with serious cases that will put them in jail, you understand.”

Caso Cerrado is all the unnecessary drama I need‍♀️

The show’s loose take on “actors” has occasionally been exposed. Consider an episode in which a couple comes to Dra. Polo complaining that their 8 year-old adopted son is causing strain in their marriage. Not long after the episode aired, the 8 year-old who appeared on the show was revealed to actually be an adult – the 20-something year-old viral sensation, Jonathan Abreu Sosa aka Pioladitingancia.

Y’all remember when he was caso cerrado? Lmao https://t.co/i2s5baAeXq

But ultimately, Dra. Polo argues, it’s the lesson viewers can take away that matters more than the factual nitty gritty. “It’s the case that is important,” she reaffirms. “It’s the lesson, it’s the set of facts that is presented there, which anybody can verify. Get on the Internet and you’ll verify whether it’s a real problem or not. Sometimes the real people come in, sometimes they don’t. They’re not actors, really. They are people who are going through a similar situation or some aspect of their life is involved in that story. So, that’s what it’s all about. It is not Judge Judy. We deal here with some heavy, heavy stuff.”

When pushed to reveal how and why “cases” are selected, Dra. Polo defers, saying she doesn’t pick the cases or participants, but does weigh in on the messages she wants the show to relay. She certainly doesn’t shy away from the wild or tough situations presented. In the premiere episode of Caso Cerrado’s 19th season last week, Dra. Polo faced something she had never had to deal with before, when a guest pulled a knife on her and threatened her with violence.

THIS GUY ON CASO CERRADO PULLED A KNIFE ON MY ANNA POLO pic.twitter.com/RV6KMcH7ch

“I really hesitated a lot, whether I would show this episode or not,” she said. As it so happened, the day Remezcla spoke to Dra. Polo, was the same day multiple bombs were sent to Democrat and liberal leaders in the US. The attorney saw a connection between this act of domestic terrorism and the type of violence her audience, particularly her younger audience, live through day to day. “We decided to go ahead and air the show because it shows that violence has become an everyday thing in our lives. People use violence as something normal and we’re all exposed to it.”

Ultimately, Dra. Polo says she leaves the direction of the show up to her fans and audience, gauging what they truly respond to in hopes that she helps them in some way. “I get a lot of appreciation letters. People say, ‘Hey, thank you.’ You know? ‘I had that problem. I saw this case and you’ve cleared up a lot of doubts in my mind.’ So, there are many ways to help, and I try and do it as best I can.”