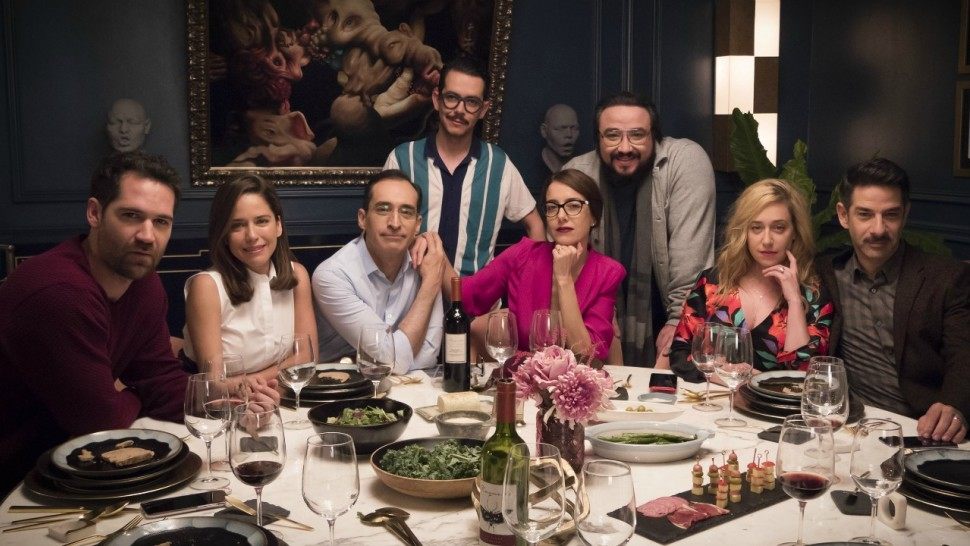 Operating like a well-oiled machine running on mutual trust, the creative partnership forged between director Manolo Caro and actress Cecilia Suárez has matured over six projects together and nearly two decades of laughter-filled friendship. Their love for each other outside the set is such that Suárez chose Caro to be her child’s godfather.

But as refined as their artistic compatibility is today, which is inevitably influenced by their personal interactions, reinvention remains a constant objective with each new collaboration.

Their most recent outing together, Perfectos desconocidos (Perfect Strangers) is the first Latin American remake of an Italian film about cell phones and secrets that has been adapted to multiple cultures around the world. For Caro, it served as a palate cleanser following the phenomenon that his Netflix series La Casa de las Flores (The House of Flowers) became.

“People think that we are just comfortable and that’s the reason we keep making things together, and to an extent it’s true, but at the same time it’s very difficult,” Suárez told Remezcla over the phone. “What we talk about every time we are going to start a new project is how not to repeat ourselves and how not to get bored of making the same thing.”

Reminiscing about his shared journey with Suárez, his infallible muse, Caro told Remezcla they met while he was still a teenager in Guadalajara, when she attended a reading of Hugo Argüelles’ novel Los cuervos están de luto at his school. Suárez’s cousin was Caro’s teacher and introduced them following the session.

She remembers it slightly differently, with the added detail that she forgot her glasses and he kindly returned them, but admits Caro is probably better at relaying their first encounter. After that initial meeting, their bond only grew stronger when Caro moved to Mexico City, where Suárez lives, and began carving out his space in the entertainment industry. Years later in the mid-2000s, Caro would write and direct his first short film, Gente bien…atascada, a venture that, as Suárez described, “was made with a bunch of friends, in the house of some other friends, with money from some other friends.”

In it, Suárez played a woman in a relationship with an abusive boyfriend trapped in a relationship based on lies. Those themes, she believes, are prevalent in everything the director does. “Lies are a recurrent element in all of Manolo’s work right from his first short. The idea of pretending to be one thing and saying another is something that obsesses him,” said Suárez.

“I rarely talk about that short film, not because I’m not fond of it, but because it was a test for me to realize whether I really wanted to do this,” explained Caro. Feeling protected by Suárez and a cast comprised of close allies during that novice effort was invaluable to kick off his career in the movies. For Caro, what makes Suárez an incomparable colleague is her disposition to take on material that’s not exactly what audiences expect of her. “Cecilia is a woman who’s taken risks with me because she knows I’ll take care of her,” he explained.

In his debut feature, No sé si cortarme las venas o dejármelas largas (I Don’t Know Whether to Slit My Wrists or Leave Them Long), a profitable tragicomedy, Suárez transformed into a melodramatic telenovela star for a small, but highly memorable cameo.

The role was out character for her given that in reality she never made a living as a soap star. “I felt we hadn’t laughed enough about an iconic part of our culture, like telenovelas are. We’ve all grown up with them and have felt their influence in our understanding of things around us,” noted Suárez.

Unable to find a fitting part for Suárez, and not willing to force it, Caro didn’t work with her for his follow-up, a classic romantic comedy titled Amor de mis amores (Love of My Loves)—the only one of his features today in which she doesn’t appear.

However, Caro’s strongest memory about his sophomore film is being incredibly nervous at the premiere because he was coming off of the success of his debut. He recalls Suárez was there and told him he should be proud of having made a rom-com for people like her, who are into them. “Every time I remember Amor de mis Amores I think about her words that made me feel so good at that moment.”

Then came Elvira, te daría mi vida pero la estoy usando (Elvira I Will Give You My Life But I’m Using It), a milestone in their director-actress alliance. “If you ask me which of my projects made me grow the most it would be that one,” says Caro. The premise emerged at a party where Caro and friends chatted about the colloquial Mexican tale of the man who goes to buy cigarettes and never returns, a comedic refrain used to explain the very real issue of absent husbands and fathers.

Following the get-together, Manolo spent the night writing and the following day called Suárez to tell her he’d written the lead role for her, and that he would only make it if she committed to act in it. She, of course, accepted. Elvira was a production marked by numerous hurdles, from obtaining the resources to make it happen to the fact that Manolo was ill during an entire week of production and had to direct while laying on a bed.

“That film took long to get off the ground, and a lot of people thought that since Cecilia and I were so close there would be a disconnect between us once on set, but on the contrary we had so much fun that it reinforced our friendship,” said Caro about the eventual result. In turn, Suárez shares the belief that Elvira took their relationship to a higher plane. “It was there, I believe, where Manolo and I really discovered each other as collaborators,” noted the actress.

Suárez was technically in every frame of Elvira, as the protagonist and driving force of the narrative, thus their follow-up together, ensemble piece a La vida inmoral de la pareja ideal (Tales of an Immoral Couple), was a breath of fresh air.

It was during Immoral Couple that Suárez truly understood Caro’s adoration for 80s pop music.

“He would call me to tell me, ‘We have the license to use that song,’ and I’d tell him, ‘Manolo, where do you know those songs from. Those are from my time!’ He has a lot of older siblings and through them that music somehow became part of him,” she added.

Not long after, Caro embarked on his first episodic Netflix show, La Casa de las Flores, and immediately knew he wanted to bring her along for this new adventure. They never suspected what would happen with the show, and in particular with her character, Paulina de la Mora. “We couldn’t have imagined it at all. In fact, when we shot it he told us, ‘I think this is going to be really cool, but it’s going to be a niche product.’”

When Caro made Perfect Strangers, he still didn’t know the phenomenon that Paulina, and the show starring beloved star Veronica Castro, would become, but his intuition led him to think the character would be polarizing. It would either be very well liked or people could hate it. “Cecilia and I had taken such a big risk with La Casa de las Flores that I decided to immediately cast her in Perfect Strangers to tackle another character and have some distance from Paulina de la Mora.”

The director describes Eva, the character Suárez plays in Perfect Strangers, as a “cabrona” at a crossroads in her life with plenty of existential doubts. Though this is perhaps not entirely distinct from the now-iconic woman she embodies in the series, this was an opportunity to push their joint efforts in new directions with a hilarious cast, while weaving in Caro’s recurring themes of dubious intentions and questionable identities.

“Now I realize that Paulina de la Mora became a phenomenon, and I’m happy we made Perfect Strangers together, because we were able to cleanse our relationship and not stay stuck in what had happened with La Casa de las Flores.” Caro is currently writing a new character for Suárez, but assured us that, to both of their benefit, it comes from a yet unseen point of view. 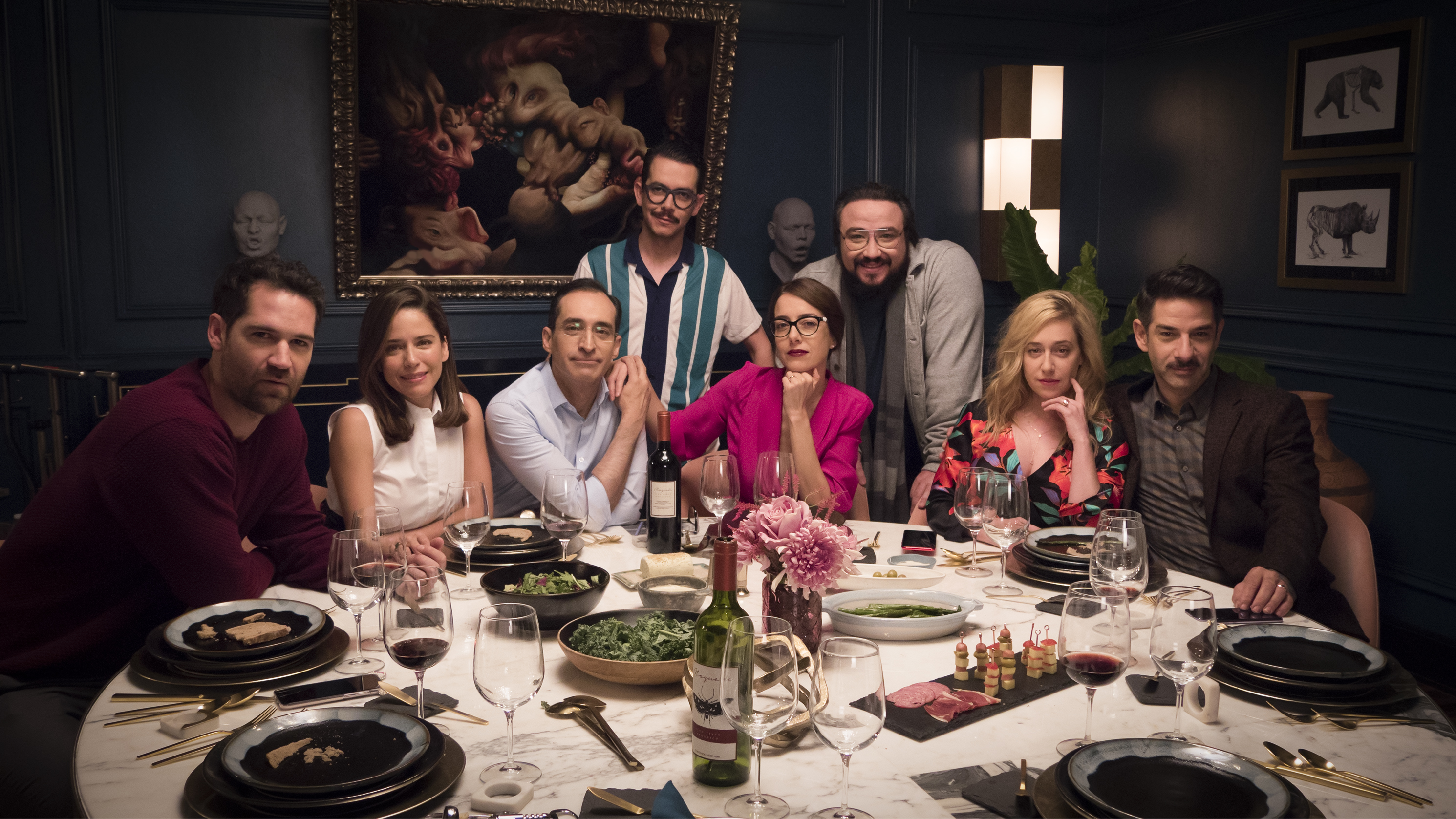 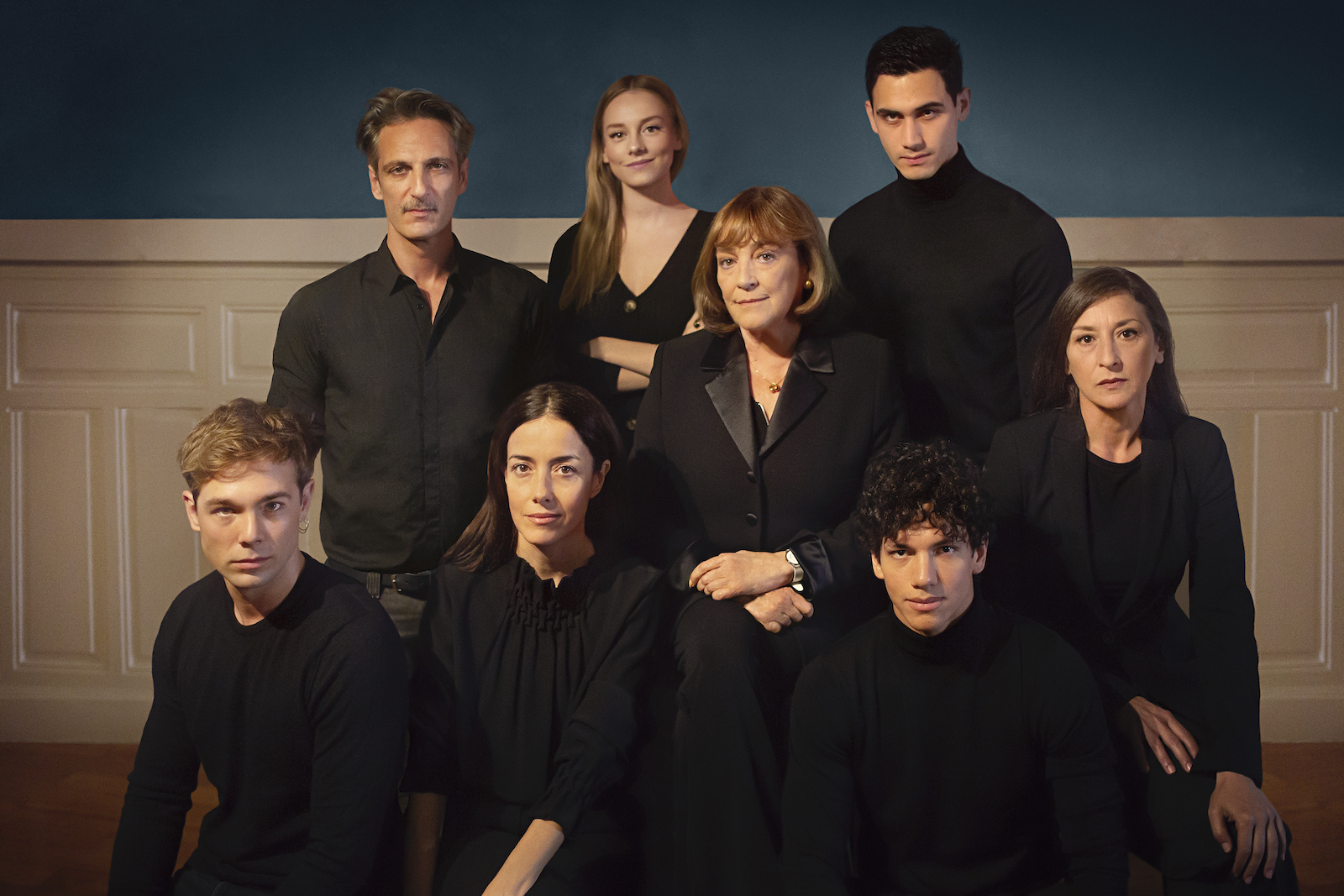 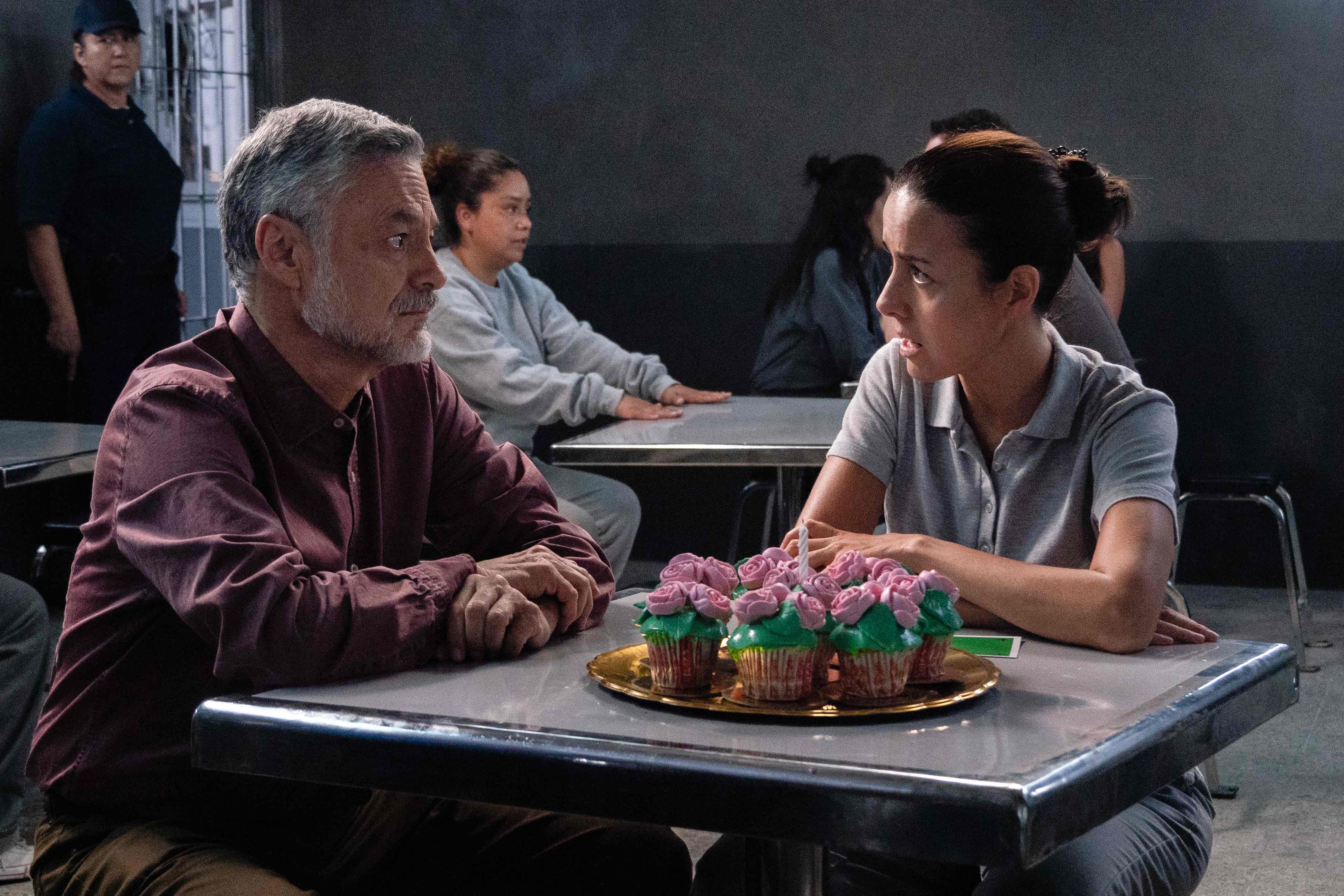 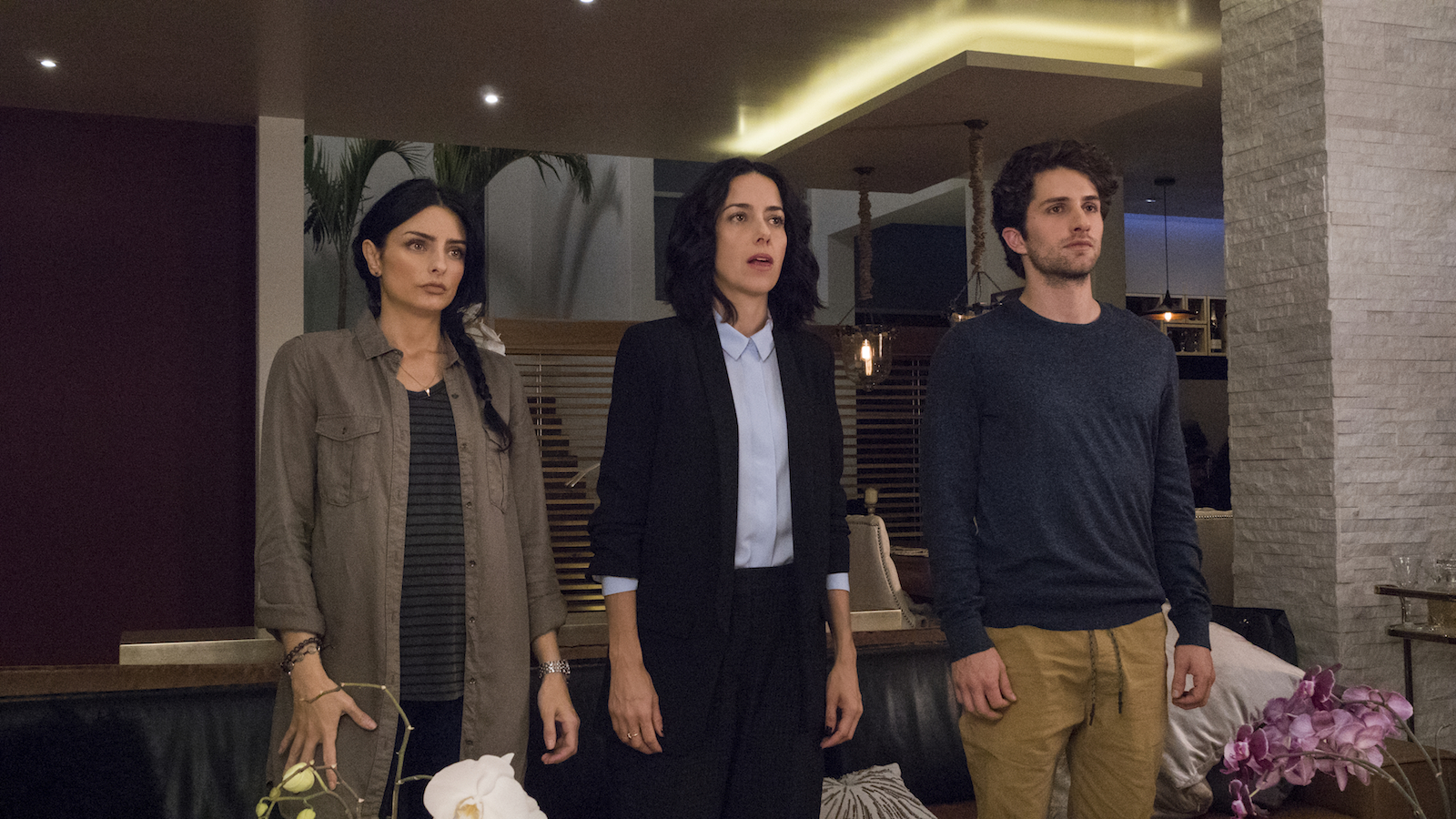