For most of his extraordinary life, East Los Angeles’ favorite son Edward James Olmos has stood as a bastion for the advancement of Latinos in the United States. At 72, the living legend is not done planting seeds of opportunity for future generations. He has formed various nonprofit organizations that aim to help Latinos tell their stories in the media.

Over the course of Olmos’ career, there has never been stronger synergy between his off-screen efforts and a character he’s embodied than in the 1988 classic Stand and Deliver, written and directed by Cuban-American filmmaker Ramón Menéndez.

Attending this year’s Panama International Film Festival (IFF Panama) for a special screening of the movie, Olmos was moved to tears after watching the emotional drama for the first time in many years. Following the presentation, the actor engaged in an extended conversation with the audience moderated by the festival’s artistic director, Diana Sanchez.

A timeless staple at schools across the US, the film celebrates Bolivian teacher Jaime Escalante, who in 1982 made headlines for leading his class of low-income Latino students at East Los’ Garfield High School to pass the challenging AP Calculus test.

On the film’s origins Olmos recalled first meeting Escalante in 1982 at a NAACP banquet where they were both being honored with the Humanitarian of the Year and Educator of the Year awards, respectively.

Fascinated by the professor’s unorthodox teaching methods, Olmos made his interest in bringing the story to the big screen known. “Let me give you a dollar for your story,” he told Escalante that night as a way to symbolically secure rights to make it into a fictionalized project.

“That’s how the road started to make the movie, but we couldn’t make it until 1987,” Olmos said. “Nobody wanted to give us a penny to tell the story of a Bolivian man helping kids take a math test.” After getting small amounts of money from numerous sources, and a more substantial sum from PBS, Stand and Deliver was completed and released to great reception.

He later told Remezcla in an interview the next day about the experience of revisiting the movie, “Watching my performance, I realized what he gave us, it was like catching lightning in a bottle and we did it.”

Olmos’ unforgettable take on Escalante earned him an Academy Award nomination. “I was the first US-born Latino to receive an Oscar nomination [for Best Actor] in the history of film, and right now I’m still the only one,” he told the audience both proud and saddened by that unfortunate truth.

In fact, Olmos believes that despite a push for diversity from studios, the situation for Latinos in entertainment is less promising than it was in the past. “In 1964, when I started out we weren’t 22% of the population of the US, we were much less. We were also less than 2% of all the content in television and film. Today, with 22% of the population, we are still less than 4% of all content. We are in a worse place now,” he noted.

The tide may turn soon, he thinks, if only based on our sheer numbers. “They say we are 18% or 19% because they are afraid of us. We are many and we are going to be many more. We dominate the hemisphere and we are completely going to dominate the United States in 30 years. Right now, we are 70 million Latinos in the US and we are growing almost 77% [more] a year than other minorities. We have so many children!”

In an interview with Remezcla the morning after the IFF Panama screening, the multi-hyphenate explained that Stand and Deliver didn’t spark a flood of Latino projects despite its success. “We have to be successful all the time,” he said. “Stand and Deliver was very well received but the industry didn’t want to make Stand and Deliver Part 2. And the people who did go out and found funding to make films with Latino themes were not successful. And that really hurt us.”

Edward James Olmos has set up a long-lasting support network for talented Latinos working today and the ones who will emerge in the future.

Now, he believes, the industry does put Latinos on screen often, but rarely do those actors lead the stories. Olmos also thinks Latino talent is sometimes less inclined to tell Latino stories. “The sadness is that we’ve not created artists that want to really advance the culture, because basically those artists like myself find it very difficult to find money,” he said.

“The industry is not going to make [those projects] for us. The industry doesn’t want us to really break loose because then they’d have to deal with us and it’s very hard to deal with us because we are not unknowing of what we are doing. To really exploit the Latino community is kind of hard,” he continued.

Nevertheless, through the organizations and initiatives he’s created, such as Latino Public Broadcasting, Los Angeles Latino International Film Festival (LALIFF), the Latino Book & Family Festivals, and the Youth Cinema Project, which teaches kids filmmaking in schools across California, Edward James Olmos has set up a long-lasting support network for talented Latinos working today and the ones who will emerge in the future.

In Panama, the actor was grateful for the praise he received from audiences, but made it clear that having the discipline to work even when he didn’t feel like it was the only leg up he ever had in his journey. “My life has been a privilege. I come from a very humble family. No one in my family was an artist or worked in film,” he said. “I’m not special. I completely understand that what I did, anyone can do it … I learned to do the things I love to do when I didn’t want to do them.”

Still very much active on the acting front, Olmos currently appears on FX’s Sons of Anarchy spinoff Mayans M.C., has recently premiered the feature Windows on the World directed by his son Michael D. Olmos, and is trying to finance a new movie titled Mariachi about a professor in San Diego helping children via traditional music. 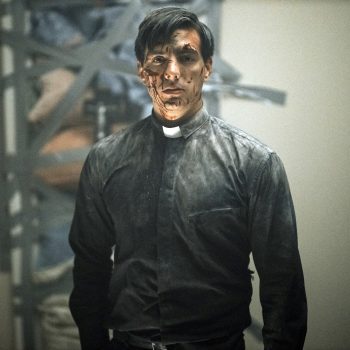