For the past year, Venezuela has been popping up in the news due to its financial and political turmoil. Skyrocketing inflation in 2016 left the economy in ruins and now amidst food shortages, its citizens are seen fighting over scraps in empty grocery stores in cable news packages that seem sensationalist, but portray a reality that many experiencing.

Just last week, the country’s Supreme Court stripped its legislative branch of power prompting many to rightfully call the decision a step closer towards authoritarian rule. The AP reports that President Nicolas Maduro asked the court to review the case, which then reversed its verdict and reinstated congress’ lawmaking authority.

The economic crisis has also touched Venezuela’s film industry. As the producer of El Inca explained after a screening of the Edwin Valero biopic at the Miami International Film Festival, shooting in Venezuela poses many challenges: “the budget was changing every week because the cost of food, for example, goes up every week.”

Despite having opened in theaters last December, not many Venezuelans have seen the film due to a court injunction in which a judge ordered it pulled from all cinemas. A Variety exclusive reveals that El Inca‘s production team filed an appeal in April to fight the court decision.

Ignacio Castillo Cottin and Nathalie Sar-Shalom, director and producer of El Inca were on hand in Miami to discuss the real-life drama that happened when they decided to tell the life story of World Boxing Champion Edwin Valero. Here are highlights from the discussion.

On Why the Film Was Banned In Venezuela

Ignacio: Why is it banned? I still don’t know. Because Valero’s family, his mother, his brother, and his sister, sued us because there are some scenes they objected to. But when the judge asked them to name which scene, they couldn’t because they hadn’t watched the film. So why is it banned? I don’t know I think we could make a really cool documentary to follow why they banned the film.

Nathalie: They pulled the film and they hadn’t even seen it before. But now that all of you who have seen the film, maybe you can answer that question now.

On Making a Biopic Worth Watching

Nathalie: It took almost six years to complete the whole film. We did research for over 3 years. Ignacio started that without knowing that it would end up being a film. It was more out of curiosity. But when he started to learn about this character and what happened in this life that led him to this tragic ending months before he had the fight of his life, the fight that he’d been dreaming about his whole life, that’s when he said, “We have a story.” So on top of the research he did interviews and then when it came time to actually work on the script, the screenwriters were able to take narrative licenses to make it a film and not a documentary. It’s a great story. And when you read about it and all the research he’d done, you realize that it was meant to be a film. What Valero went through was just meant to be a film.

Ignacio: At the beginning I wasn’t even sure I wanted to make a movie. I knew that maybe I wanted to write about him and his disappearance and everything. But what made me think that this should be a film was when I discovered that there was a romantic story involved. The leitmotif in his life was his wife and then when I found out there was a third person involved, I knew it could be a film. I don’t like biopics in general. I like documentaries about people but I don’t know if I like films about real people. Because it ends up being a general story about anything. El Inca was different because I saw a clear story from beginning to end. This was a love story. And at that moment, after three years of doing research I said, “You know what? Let’s make this film. It’s worth it. For sure.” 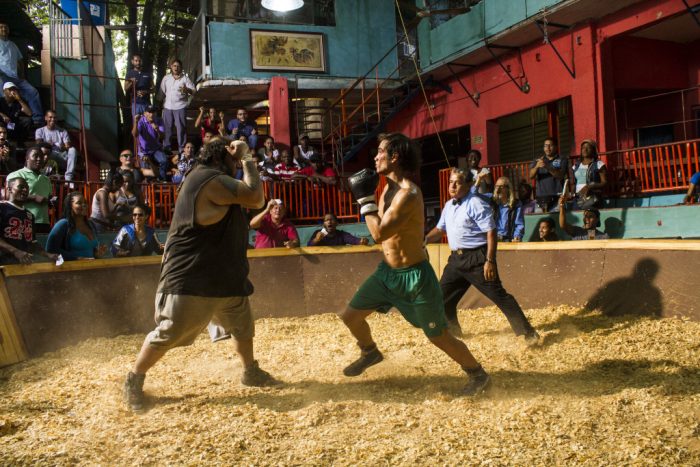 On Casting Their Lead Actor

Ignacio: Casting El Inca was very difficult. I think we saw over 200 people. Everybody knew him so when we started to cast everyone started calling, Mireya Guanipa who was our casting director. It took us a lot of work to find out who would play El Inca. But I knew we needed a great actor. It wasn’t important to me if he looked like him or if he boxed. We needed someone who could work on set. Who was open to work with everybody and Alexander Leterni’s discipline was key to that. It’s a shame that Alexander wasn’t able to be here. He got his visa denied. But he’s great. Actually, when we cast him—he doesn’t really look like Edwin Valero, he’s actually a blond guy with blue eyes. But he’s a great actor and we knew that his character was the most important thing in the film. This is about a person that fights. Not about a boxer. We needed a great actor to be able to do it all. Play him as a young kid, as a teenager, as a fighter.

Nathalie: One of our biggest challenges was to make Edwin Valero lovable. In Venezuela everyone knows how the story ended. So we needed an actor who was able to portray all those emotions in order to connect with an audience. Because it’s a tragic story. And the work Alexander that he did and the preparation that he went through. I mean, he trained for over six months to get in shape for the film, he learned to box, he’s right-handed and had to learn to box with his left-handed, because Valero was a lefty.

Ignacio: And the most important thing is the emotional part. Because that’s really what the film is about. He was very involved. Actually, for us, before we started shooting we knew that it was important for everyone on set to see him as El Inca. So he was El Inca all the time. And he did. His performance is great. He even broke up with girlfriend—I mean he was very into the character. But I also want to talk about Scarlett Jaime, who plays the wife. She was also very important because even though she’s quiet for most of the film, for me she’s the rhythm and the tone of the film. We work a lot to give that performance. It’s the type of performance that’s hard to see but you need it. You need it for Edwin and you need it for the film.

On Making the Most of a Shoestring Budget

Nathalie: The film was shot completely in Venezuela, in Caracas and its surrounding areas. One of the main challenges was actually that. It’s a film that has a lot of locations in different countries and to be able to make that believable throughout the film was a bit challenging. Also, filming in Venezuela in the situation we’re in, the budget was changing every week because the cost of food, for example, goes up every week. It was a challenge but the hardest part was just to make it believable and make the fights believable—to get you to say, “Yes, this is a boxing match.” We shot the fights with three cameras shooting at the same time. It was a big production and it was a challenge.

Ignacio: When we say that it’s a big production we mean everything that was involved in it. It’s an expensive movie for Venezuelan standards. When you see the fights everything that you see was there. There’s no post-production involved in those scenes. But the film cost less than $1 million. For us that’s a lot even if for international indies that’s small.

Nathalie: This is our international premiere so hopefully we’ll be working on bringing this film to other markets and to be able to show our work around the world. To bring this story to other places. We’re still working on it.

Ignacio: As for our next film, it’s called The death of Márquez. It has nothing to do with El Inca. It’s a fiction film and it’s not based on any true stories and we won’t have any problems with any families, I hope. That’s our next project and we’ll probably start work on it next year.