In The Book of Life, director Jorge Gutierrez takes moviegoers on a journey to worlds never before captured in an animated feature film. Inspired by the Mexican holiday Dia de Muertos, the film tells the story of two childhood friends, Manolo and Joaquin, both attempting to win the heart of the same young woman. Taking an interest in the love triangle are two spirits, La Muerte and Xibalba, who make a wager with each other as to which young man will ultimately win her affection.

During an interview with Gutierrez and actress Kate del Castillo, who lends her voice to La Muerte, we talked about how important Dia de Muertos was to each of them growing up in Mexico, and how fate brought them together for The Book of Life.

Jorge, the last time I interviewed you was back in 2007 when you debuted your animated series El Tigre: The Adventures of Manny Rivera on Nickelodeon. In my opinion, the cartoon was extremely underrated. Why did it only last one season?

“I’m probably the most stubborn Mexican out there.”

Jorge Gutierrez: Honestly, the U.S. was not ready for those flavors. I’m hoping, seven years later, the palate has evolved and now people are ready for something spicy and tasty like The Book of Life.

During that interview, you told me you created El Tigre because growing up you never saw Latino characters in cartoons that you could identify with. You told me a story about when you were a kid you watched He-Man and thought Skeletor was a superhero for Dia de Muertos. Has the idea for The Book of Life been inside you for that long?

Gutierrez: Yeah, even before El Tigre. I had the idea when I graduated from CalArts back in 2000. When I graduated people told me, “You’re just a kid out of school. Nobody wants to see that subject matter.” That’s what they told me about El Tigre, too, by the way. I’m probably the most stubborn Mexican out there. Just like with El Tigre, I didn’t give up on this film. Growing up, I didn’t see [Latinos] in television cartoons, but I also didn’t see them in animated feature films. That’s why we made The Book of Life.

El Tigre was such a passion project for you. You must’ve been really disappointed that it only lasted one season.

Gutierrez: It absolutely broke my heart. But, with that said, I was still thankful for the opportunity. Because of El Tigre, Guillermo del Toro found out about me and fell in love with my work. We wouldn’t be making this movie without El Tigre. 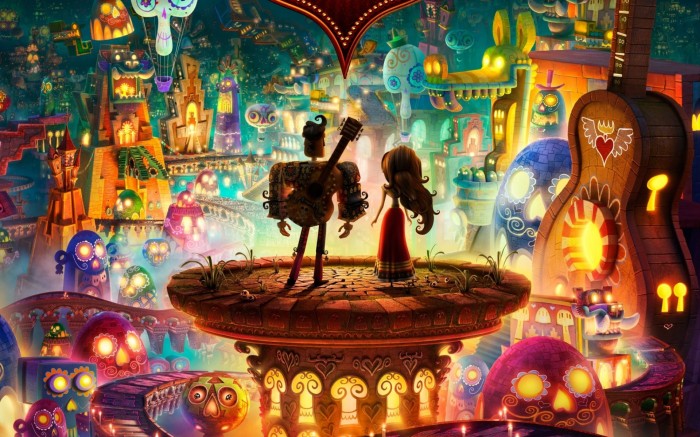 Kate, growing up, did you identify with any cartoons or TV characters as a Latina?

Kate del Castillo: I only wanted to be Wonder Woman. We didn’t have any money and couldn’t afford a costume, so my mom made costumes for my sister and me. We would go to the rooftop and play and pretend we were Wonder Woman. I think every woman is a Wonder Woman. We all have that in us. We just have to find it.

Since both of you are originally from Mexico, talk about how important a celebration like Dia de Muertos is for you.

Gutierrez: For me, Dia de Muertos has been a very important tradition growing up. Even though it’s very Mexican, I believe the concept is very universal. As long as we remember those who are no longer with us and tell their stories, sing their songs, cook their favorite dishes, and tell their favorite jokes, they’re here with us. If we don’t say their names and don’t talk about them, then they’re really gone. I think the iconography of the holiday is beautiful, but I believe the message underneath is more beautiful.

del Castillo: We had a lot of beautiful traditions in Mexico. One of my favorites was going to the cemetery and celebrating all the people who are in a better world than we are. We need to feel good for them. Dia de Muertos is a celebration of color, love and life.

“I figured, this is my first movie, but at the same time, this might be my last movie.”

I really enjoyed how you included 2D animation into this 3D movie. It was definitely a smart way to get the look of El Tigre into the film.

Gutierrez: And it was the only way I got to animate! I animated a lot of those sequences. For the fans of El Tigre, that’s how we snuck in a bunch of El Tigre cameos.

Even though there are sequences in both 2D and 3D, the style of the entire movie is seamless.

Gutierrez: I’m a lover of animation, so I put references to not only how Sandra [his wife] and I draw, but also to the history of animation. So, I make references to stop-motion and rubber hose [animation] and Japanese animation and basically all the things we love and adore. I figured, this is my first movie, but at the same time, this might be my last movie. So, I put everything in it!

Kate, you’ve worked on animated films before. Have you seen anything like The Book of Life?

del Castillo: I worked on Cars, but only the Spanish version. The Book of Life went beyond my expectations. I knew it was going to be amazing, but I was chilled to the bone when I saw it for the first time yesterday. I was touched on every single level. I laughed like crazy. I felt so much pride being Mexican. This is a dream come true to be picked to voice this iconic character.

Jorge, what did you see in Kate that made you want to cast her as La Muerte?

Gutierrez: When we were designing the character, I kept telling my wife, “You know, Kate del Castillo would be fantastic as La Muerte.” She is not only known as a great actress, but a really strong role model for Mexican women. When I told Guillermo about it, he had just met with her and said, “You have to cast her!” When I pitched her the movie, she showed me a picture of herself from the previous Halloween and she was painted like a skeleton, like a Catrina. Within the first five minutes of me telling her about the movie, she said, “I’ll do it!”

del Castillo: I was mesmerized by the story! I’m very lucky.

Did the look of the film change in any major way from pre-production to the actual creative process?

Gutierrez: You know, every department has a say in the animation. Someone will say, “That’s too hard to animate. Let change this or that to make it easier.” By the end of it, sometimes an animated movie can get watered down. But because I was the director and the main designer, I basically said, “We’re not watering anything down.” You’re all going to hate me at the beginning, but in the end, when the movie is done, it’ll look like nothing anyone has ever seen.

Gutierrez: The more papel picado, the more skulls, the more skeletons! I thought, “Somewhere down the line, someone is going to tell me I have to take half the skulls out of the movie.” So I put a billion skulls in there. So when I have to take them out, there will still be 500 million skulls. But that day never came, so we got to show everything.

The Book of Life opened in theaters October 17.