In front of a packed house at the Tower Theater in Miami, Jorge Thielen Armand gently spoke into a microphone and told the audience at a recent screening: “I wanted to tell you that what you’re going to see on the screen today is a story that was happening at the time that we were filming and is still happening now. The people in my film are real. They’re not actors.” The sparse introduction to his Venezuelan drama La Soledad set up viewers to appreciate what many may have missed – that the story is fictional but the actors are playing themselves.

The docudrama centers on the director’s actual family home, a large estate whose walls are crumbling. Despite its disrepair, the owners allow the help to live there including Jose, a handyman together with his wife, daughter, and grandmother. It’s a quiet film that meanders slowly after opening with old Super 8 home movies of the wealthy homeowners, but ultimately is an indictment of Venezuela’s ailing infrastructure and economy.

Following the screening of La Soledad at the Miami International Film Festival, director Jorge Thielen Armand and producers Adriana Herrera and Rodrigo Michelangeli were on hand to answer questions. Here are the highlights.

On the Film as a Metaphor For Venezuela

Well, the metaphor with the house and Venezuela being mirrors in a way was very evident. We couldn’t ignore that. We intended to sort of create that notion that the house represents the state of the country right now. We also came up with the idea of wanting a white and very skinny horse—Simon Bolivar’s white horse is in our national anthem so there were a lot of subtle things throughout like that for us to communicate the state of the country.

On Highlighting the Country’s Violence With Historically Accurate Details

With the razors we took a bit of a license. Of course, we wanted the character to believe that he’d found something. Hopefully you thought so too. But then we kept investigating and we found out that there are a lot of houses, when there’s rebuilding here, that they find a lot of razors behind walls because there were compartment in washrooms in the old days to throw the razors. So it was great for us, we could justify it from that angle. [he then asked the audience member why they thought the razors were important to which she answers, “I thought it was about the violence” and he merely responds: “Well, that’s a good reading.”]

On Getting Support From the Venice Film Festival

Well, the film really came together thanks to the Biennale in Venice. They have this program called Biennale College Cinema for first-time directors. They basically offer you workshops and give you a short window in which to basically produce the film. We designed the shoot so that we could make it in such a short amount of time—if you notice, a good 60 to 70% of the film takes place in the house. And the characters you see in the film are real. I’m very close to them. So, that helped my work as a director.

On Refusing to See the World in Black and White

Well, with Irene I particularly wanted to show that there really are no villains in the story. She has a right to her house. She’s the only real actor in the film. The real villain in the story is the system where these characters live—the world, and really the country around them. Irene is a character is in all her right to say, “I want my house back. You guys have been living here but that’s enough.” I wanted to just sort of put the audience on the fence. Just where the shot is, to understand both perspectives from one side there’s the sense of home and on the other there’s the right to property. 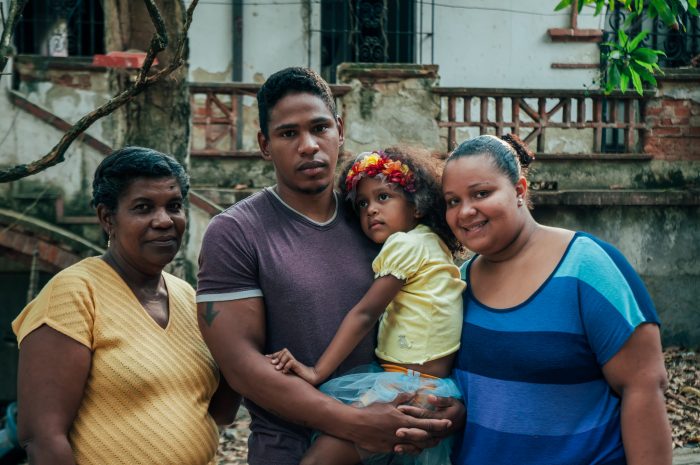 On the Off-Screen Happy Ending

“We intended to sort of create that notion that the house represents the state of the country right now.”

Right now, the real ending is actually a happy ending. It happened after we finished the film. My family, who are the owners of the house, they helped them to buy a small house where José is able to live right now with Adrializ and Marley. They’re all working on the house together for it to be a transition. There’s actually a lot more people that lived in the house that we didn’t show in the film. With them, it was different because there didn’t exist the same sort of connection, but still my family helped with the moving expenses but, of course, since they’re not really an NGO they couldn’t really provide the same for everyone.

On the Film’s Take on Latin American Populism

Jorge is my father in real life. And the symbolism with this film is that we’re really trying to talk about is the populism that exists in Latin America and in Venezuela, of course. When José rejects the money, he’s saying no to an easy solution. He’s saying no to a handout. And when he says “You’re all the same.” He’s talking about class prejudice. That’s what we were trying to community. And actually, when Jorge goes down to the mines—we’re actually shooting our next film following that character to the coal mines. It’s not a sequel, but it’s that same character.

On the Movie’s Message of Empathy

The characters in our film they look at each other from the same perspective. And that’s really what they have in common even with Jorge, who comes from a privileged perspective, is the lack of opportunities. They look at each other with that. I think that for us to overcome this problem in our countries and in Latin America, we need to make work like this and talk about it, and have a deeper understanding so that we can live together and understand each other more. It’s all about getting to know each other.