Nobody’s Watching is a deceptively simple film. Taking place over one year in New York City (and Buenos Aires), Julia Solomonoff’s latest project is about an aspiring TV actor from Argentina biding his time until an indie movie about undocumented immigrants he signed on for heads into production. Taking jobs as a waiter and a babysitter, Nico (played by Guillermo Pfenig) hustles every day to stay afloat in the city.

Shot with the naturalistic flair the Argentine director exhibited in her 2009 film The Last Summer of la Boyita – Nobody’s Watching ambles along as Nico is forced to reassess his life in New York. He avoids phone calls from his ex-lover. He puts on airs when a friend comes to visit. He even grows unexpectedly attached to his friend’s baby. Yet throughout, Nico’s story allows Solomonoff to tackle broader issues in ways both refreshingly subtle and complex. The film speaks to the plight of undocumented immigrants, about the privileges white Latinos wield in the U.S., and the traces of homophobia that still keep some people in the closet.

Ahead of her movie’s world premiere at the Tribeca Film Festival, Remezcla sat down with Solomonoff to talk about her first time in the director’s chair for a feature in 7 years, why she’s nurtured a great network of fellow Latin American filmmakers, and why she had to rewrite the script to make it more ESL-friendly. Check out some highlights from our chat below.

On What Nobody’s Watching Is About

I would say it’s an intimate portrait of a man in transition. Somebody who is trying to rebuild himself and his identity after a relationship that framed him. That gave him a lot but that also took a lot away. He comes here [to New York City] to prove his worth in his own terms. But things are hardly that easy. But I think it’s also a film about a person trying to find out who he is by realizing how other people see him or not. That’s how he starts understanding what he needs. He spends a good chunk of the film failing. Miserably. But I also like how resilient he is. He’s a survivor. He’s somebody who has the strength to come up – but all those failures start questioning the whole idea of success and visibility, and what it means to be acknowledged. And what it means to see yourself rather than waiting to be seen.

On Showing New York City in a New Light

“I wanted to talk about New York from an insider’s perspective.”

I very purposely avoided the postcard New York. I wanted to talk about New York from an insider’s perspective. And from a perspective that is not trying to sell but at the same time it’s not angry at the city. It’s more about balancing what your relationship to the city is. I mean, like today: it’s a wonderful Spring day, and we all love New York today! And two months ago we were miserable with the bitter weather. It’s a city that has become very expensive to the point where it’s began to expel a lot of the creative people that made the spirit of the city. It has become this city where developers are really taking over. And whole areas that were very important for community and cultural life are changing. People don’t see that because in general there is a little bit of a complacent idea of New York as incredibly welcoming and dynamic – and it is incredibly dynamic. The energy of New York is unique. But at the same time, you have to keep up with it!

On Representing the Privilege of White Latinos

[Nico’s ability to pass as white] is good for him because he’s able to get away with a lot of things that other illegal immigrants wouldn’t be able to. Like, he would not be spotted by the police as somebody who is “suspicious.” You know, he’s caucasian. But at the same time, that keeps getting him – he doesn’t belong anywhere. Somebody said it in a very fun way, he’s in the wrong bottle. He has the right juice but in the wrong bottle. So he never totally belongs here or there. With the Latinos at the beginning they think he doesn’t speak Spanish. But at the same time, he uses his good looks to navigate worlds that other immigrant people could never think of.

That was very important to me. The reason for him to come here was not to come out of the closet. This is somebody who is out of the closet in Argentina. That is something that, for Americans, is hard to understand. That there was same-sex marriage in Argentina before there were in the U.S. We’ve had a woman president twice, like Chile and Brazil did. There’s a tendency from Americans to think that south of the border is retrograde, and macho, and Catholic. But the truth, yes we’ve been through dictatorships, but we’ve made huge jumps in our growth. And after the dictatorship, democracy came and a lot of rights that we’ve acquired have not been taken away – from education, to health, to gender, and sexuality. For me it was very important. That’s why his mother says, “Are you with Jeff, right now?” Because he did not come here because he couldn’t be gay in Argentina. The problem was that he fell in love with the wrong guy. 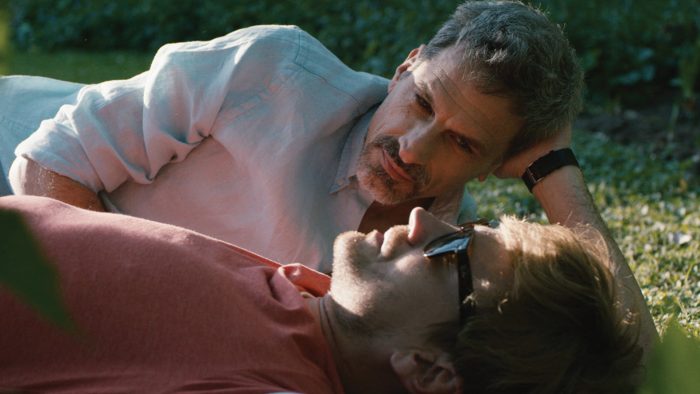 I have to admit that I always choose the most indirect way, and I always pay the price for it! It’s so easy for people to say, “Oh, urban is progressive and rural is backwards.” And for me Last summer of la Boyita is like, yes – but in an urban environment this [intersex] kid would have gone through surgery and he would have been silenced in his sexuality. In a way, he was saved by this secret nature of the countryside. And then, of course, he had to confront that. But he had this period of grace where he could be himself without the questions, and without any scientific imposition. So yes, it’s a lot easier to tell those other stories. Like, yes, here comes to city to bring the progress, and the doctor will tell you what to do. And here the doctor is the guy who doesn’t know what to do! [Nobody’s Watching] is sort of the same. It would be easier if I go more in the traditional route, but I’ve already seen that. But yes, I do have a bit of a skewed angle, I have to say. It’s not very mainstream.

On Writing an ESL-Friendly Script

“You have a different persona in a different language. There’s something a lot more relaxed in your own language.”

He gave me so much. He believed in this film so much and I think the film will give him a lot back, I hope. Guillermo used to do television. That’s how I knew his face. That’s also part of the point of the film is the idea that if you’re blond in Argentina, you get certain kind of roles. But what was an asset there almost becomes a disadvantage here. But then I met him socially and felt he had a very different sensibility – much edgier than the image I had of him. And then, right when I was about to do Boyita, I met with him at a cafe and I said, “Listen, I’m making a film and I have a super small role for you.” He worked just for a few days with me on Boyita, but I had a great time with him. Then I started thinking about this story and talking to him about it. I wrote the script and sent it to him and he loved it. But then I realized that most of the things that I wrote in English he could never say, with the kind of English he had.

He had a full year of preparation, and we paid for someone to help him and I still felt that like it wouldn’t feel natural. After seeing a couple of films with actors who I really admire but that are crippled by having to work in another language, I thought, “I cannot do this.” I worked with my co-writer, Christina Lazaridi and said we had to rewrite everything with English being an obstacle. And so we ended up having way more Spanish than I thought we’d have. Like the relationship with the mother of the baby wasn’t originally going to be in Spanish – but it had to be. We rewrote it for him, and I think it was great to see how different he was relating to people in Spanish and in English. I see that because I observe that in people a lot. You have a different persona in a different language. There’s something a lot more relaxed in your own language.

On Creating a Truly Cosmopolitan Film

Well that’s the beauty of what’s going on right now in, how can I call it, Latin American independent cinema, or art cinema. We support each other. [Director] Petra [Costa] is in my film, I co-produced [Julia Murat’s Pendular], Isabel [Coixet] produced mine. I do believe in those collaborations. I believe in the circulation of these stories. Particularly in Nobody’s Watching, because it was a New York story – and my life in New York is a very cosmopolitan life. If this was Boyita, I could not do it because I would be invading a space that is very isolated. Being in New York it just felt natural to create these collaborations that aren’t just financial – it’s an exchange and will also help with the visibility and the circulation of the film. It’s a coalition of tiny giants. We’re all small, the film is small. But at the same time we’ve created connections that I really love.