Guillermo Quintero‘s first feature film, the documentary Homo Botanicus, hopes to a breath of fresh air for those who have seen Colombian cinema become one of the most exciting film industries in Latin America. Audiences at festivals around the world may be used to projects about the country’s conflict (see last year’s Alias Maria, Siembra or many of those showcased at the recent Colombian Film Festival of NY) or focused more on domestic storylines (like This Time Tomorrow and Keyla), but Quintero’s doc is concerned with nature’s hidden secrets.

Echoing its Latin title, the Colombian-born director bills his project as an anachronistic if romantic voyage into nature led by two modern-day Colombian botanists. The doc may have more in common with Ciro Guerra’s Embrace of the Serpent, given its dreamy approach to the country’s wildly diverse natural landscapes, than with any documentary coming out of that booming cinema industry. What began as an independent project has now gotten several producing partners in play and just last year at the Cartagena Film Festival, Quintero was selected by the Tribeca Film Institute as one of the projects getting support from the esteemed New York-based enterprise. Since launching in 2010, through the TFI Latin America Fund and other programs, the Tribeca Film Institute has awarded more than $700,000 in grants while also providing year-round mentoring to more than 60 filmmakers from 15 different Latin American countries. The annual film festival that takes over downtown Manhattan may make for a splashy centerpiece, but the work at the Institute runs year round.

Ahead of the Tribeca Film Festival, which Quintero will be attending, Remezcla hopped on the phone to chat with him about this most curious project, why Homo Botanicus is a return to his days at university, and what a nature doc about botanists might spell for the Colombian film industry. Check out some highlights from our chat below.

On How a Biology Degree Led Him To Become A Filmmaker

I have quite a varied career, you could say. I got here to where I am in quite a circuitous way. I have a degree in Biology but then I left to France to study Philosophy and Education. I’ve also been engaged in a number of educational film initiatives both in Colombia and France. I’ve done plenty of other things, as well. Then, about six or seven years ago, I became a part of a young filmmaking collective in Paris. Most of them were Colombian. Its objective was to showcase Colombian cinema in France. It’s called Pedro Que Ladra. That’s where I began to become more involved with filmmaking. Through there I also met plenty of people who’d studied film in school. And, in a kind of serendipitous turn of events, I ended up working as field reporter working for two Colombian news networks which got me closer to the audiovisual world. Then about three years ago I decided to kick off this project, Homo Botanicus, which has a lot to do with my past as biologist and everything I’ve learned about philosophy and my life in Paris.

On Finding His Leading Men

When I was studying biology all those years ago, Julio Betancur was my botany professor. Back then I thought my future would be in that area. But I started having some doubts about science and its very rigid way of looking at the world, so I began to drift away from it. That’s when I lost contact with Julio. But even after that’s happened since I abandoned biology, I kept going back to those memories of those field trips I took with Julio in his classes. So I reached out to him and told him I wanted to record him in his element. Even before contacting him, whether I was in Paris or here in Bogotá, I had this feeling of seeing myself as this old explorer heading out into the forests and jungles. That’s what made me reach out to him. I proposed heading out with him to the field and taking a camera with me. He felt a bit flattered and eventually agreed.

That’s how the project began. Cristian came on board later. I met him during shooting, actually. Julio is always surrounded by students. In his office you can always find eager students who want him as their mentor, as their guide as they become botanists. When I started to shoot the film, Cristian was one of those students. I got to see the dynamic that they had with each other and quickly decided that they’d make a great on-screen pair. The story I wanted to tell was one of a mentor and his disciple, and through that relationship, I wanted to open up questions about man’s relationship to nature. But first of all, what I was drawn to about them was the strong sense of a teacher and a student, this sense of continued legacy.

On Learning What Works On the Go

At the beginning what I wanted to focus on was this relationship between the professor and his students, which is why I started to shadow him during one of those same courses I’d taken as a student. But that meant he was always surrounded by 7-8 students which posed several logistical issues for me. It made shooting everything I wanted harder, and since there were so many characters, it became difficult to keep track of them all. So along the way I began refining the process on both a technical and a narrative level. We decided to shoot—and this is what we’ve been shooting so far—focused on just the two of them. So I have them hooked on two mics and I have an additional one to capture ambient sound around them, and I have it so that I can capture sound even when they’re far away since I really wanted to be able to shoot them from afar at times yet have the sound be as if we were right there. And then, visually, I’ve been alternating between using a tripod for quieter, more relaxed shots and a Steadicam to catch more movement. Heading out with them has been quite an adventure—it’s still an adventure! I actually just got back a few days ago from our latest shoot. Of course, I’ve gotten better at everything since I know their rhythms, how they move, where to look, etc. It’s a lot easier now. 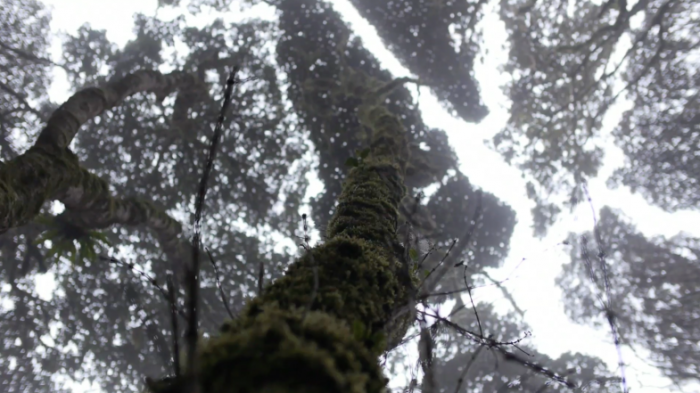 On How the Doc Fits Into Contemporary Colombian Cinema

“It enriches our view of that fantasy-like image of Colombia that our literature has always mined for inspiration.”

Knowing what I know of Colombian cinema, given my work with El Perro Que Ladra, I think Homo Botanicus is a rather curious and even strange. In general documentary filmmaking in Colombia (with some exceptions, of course), deals mostly with personal issues—you know, parents, families—and then, of course, with social themes that speak to the conflict, the paramilitary, stuff like that. All of that is very important for me. It’s key to tell those stories. Not only to have a sense of history but to keep building on what Colombian cinema is about. For me, Homo Botanicus shows a very different Colombia. It shows a view of this country that’s diverse and mysterious. And in a sort of Romantic way. When I say “Romantic,” I mean in the German Romanticism way.

I think the success I’ve had in showing and shopping around the project has been in part due to that freshness of point of view, in that there’s not much quite like it out there yet in Colombian cinema. That’s what I’ve been told. That it’s a documentary that surprises you, that it knocks you right off. Mostly due to the anachronistic vision of its characters—you don’t really think that nowadays there are still botanists who lose themselves in forests in order to survey nature’s secrets, still. In a modern world like ours, seeing them roam around the forest like that is just fantastic. And I think it enriches our view of that fantasy-like image of Colombia that our literature has always mined for inspiration. For me, Homo Botanicus and many other projects that are surely already being produced right now, will continue to enrich what Colombian cinema can be, especially once it stops being mostly about social and/or familial issues.

On Funding His Film

This was a project that I began on my own. I have found various allies along the way. In France I’m working with Stank, which was the first production company that came on board, and here in Colombia I’m working with Casatarántula. Those partnerships are key to be able to secure the necessary funding. Thanks to them I was able to get the Proimágines grant for feature-length documentary—they only give out three of those a year. I was very thankful for that since I don’t have much a film career as is. That gave me the confidence I needed to sort of say, this project is worth pursuing. We kept looking for funds here and there, and that’s why we’re so excited about heading to Tribeca. When they approached us during the Cartagena Film Festival we were thrilled. Of course, things like these are never easy to get off the ground. Finding funding for documentary films is very hard. But we

This interview was conducted in Spanish and was translated by the author for Remezcla.

The TFI Latin America Fund supports innovative film and video artists living and working in the Caribbean, Mexico, Central and South America whose works reflect their diverse cultures in the scripted, documentary or mixed media form. Grants are given to projects that are in production or post-production.