Before they even knew each other, DJs Christian Mártir, Suce, and Laylo were always asked to play hip-hop and dancehall at parties around New York. The club nights were fun and fine and even enjoyable. But, as Laylo puts it, there was something missing. “There was always a point in the night where I wanted to hear a little bit of salsa or merengue and that never got played,” she says.

They kept running into each other. The club scene in the five boroughs, while thriving, can be small.

Mártir, Laylo, and Sucio eventually met up at a 2014 event billed “as a celebration of a legendary label, genre, and era of Latin music,” Laylo recalls. But it didn’t sit right with them. “We couldn’t understand the artists and the lineup if that’s what it was supposed to be about. We ended up having this conversation around getting really disheartened by what gatekeepers and record labels – and even the media to a certain extent – were billing as the ‘Future of Latin Music.’”

For their entire careers, the three DJs had watched the future, and even current status, of Latin music be determined by people who didn’t understand it.

“It seemed to be a gross misrepresentation of the music, of the culture, and really lacking all the heart, all the soul, and the essence of who we are. Even more insulting, it seems a lot of people – when they talk about the future of Latin music…[it’s] synonymous with making music that is acceptable for or palatable to white hipsters,” she said. “As if there aren’t young Latinos, as if there aren’t old Latinos, as if there aren’t middle-aged Latinos that all love this music and are connected to it — and are invested in moving it forward.”

It was the last straw. So the three friends decided to start throwing their own night in Brooklyn, and dubbed it A Party Called Rosie Perez. It was only supposed to be a one-time affair in 2015, but it was so successful that they decided to go monthly. They marked their first anniversary earlier this year.

The Rosie party combines their love for Latinx culture and honors a living legend at the same time. Its title is an attempt to be honest to the borough that hosts the party each month. What’s more Brooklyn than Rosie Perez? “When you go through her resume…From dancer to actress to producer to author to activist, when you think about that, why not? She’s alive; she’s here with us. We need to celebrate her,” Suce said. “We need to not wait until people are gone to celebrate them.”

When I ask if there was a question of ever calling the monthly something else, Laylo admitted she was initially hesitant about the name. “It’s a little bit of a sore spot for me because whenever I’m in predominantly white spaces, I always have people coming up to me saying, ‘Oh my god you sound like Rosie Perez.’ And I know they don’t mean it because they’re paying tribute to all that she is,” she said. “They mean it like, ‘You sound like a caricature.’” But she realized that’s precisely the reason to embrace the name: Rosie Perez represents a distinctly New York Latina experience that needs to be celebrated.

“I do identify as a black woman, as a Dominican woman and as a New Yorker; those are the biggest parts of my identity. In many ways, Rosie Perez represents that ability to be Afro-Latina, to be a New Yorker, to be from the hood, and be unapologetic about it. And to be authentic about it, and forge all kinds of new pathways for herself — not in spite of who she was but because of who she was,” Laylo said. “It’s perfect that the party is named after her.”

Each of the DJs is fiercely proud of their Latinx roots, and got into DJing as a way to preserve Latin music. Mártir was born in Puerto Rico and developed a love for b-boying and hip-hop when he was young in Miami. Laylo was born on the island, too. Suce and his family moved back to Puerto Rico when drugs started infiltrating the Lower East Side. As they came of age, each moved to New York and became politically involved. Laylo joined a collective of black and Latina women committed to community-centered political education. Their fundraisers were “basically be house parties,” but all the DJs were men. She and her friends bought some turntables to share, but she was the only one who stuck with it. Meanwhile, Suce is a longtime radio DJ.

At the parties, they are dedicated to bringing those roots to the dancefloor, but evolving them too. You’ll hear everything from radio rap to iconic Willie Colón records. “We play a lot of Latin music. There’s no Latino tokenism.” Laylo said. Christian usually opens the parties, while Laylo plays “pretty much anything from the African diaspora.” She has an affinity for music that captures “the fabric of New York dancefloors,” but it’s got to be more than just nostalgia, she adds. Meanwhile, Suce always plays vinyl. “Throughout the month, I’m going through records, but also things happen that refresh my set. When Phife Dawg passed, I did a Phife set.” When Donald Trump was elected, Laylo played YG and Nipsey Hussle’s  “Fuck Donald Trump” at the next function.

For each of the DJs, it’s a space to reclaim and reaffirm the deep roots of Latinx music communities in New York. It seems like a tall order, until you’re out on the dance floor, vibing to seamless salsa and hip-hop blends. “We’re being erased from our own music and culture the same way we’re being erased from New York because of gentrification. All these things are very connected. I was really down for doing something that could be like, ‘No, that’s actually not the case. We’re not going out like that,’” she said.

Mártir says they hope to expand, maybe uptown. Even Puerto Rico, Laylo suggests. For now, on at least one night each month, A Party Called Rosie Perez provides a space to be Latinx, Black, and proud. Mártir says cultivating a community is the ultimate service of the Rosie party; the three friends are just using music as their tools for outreach. “It’s not about us,” Mártir says. “We’re there to serve our community. We’re there to serve our people.”

A Party Called Rosie Perez goes down once a month in New York City. Catch the next installment on May 13, 2017 at Louie & Chan. 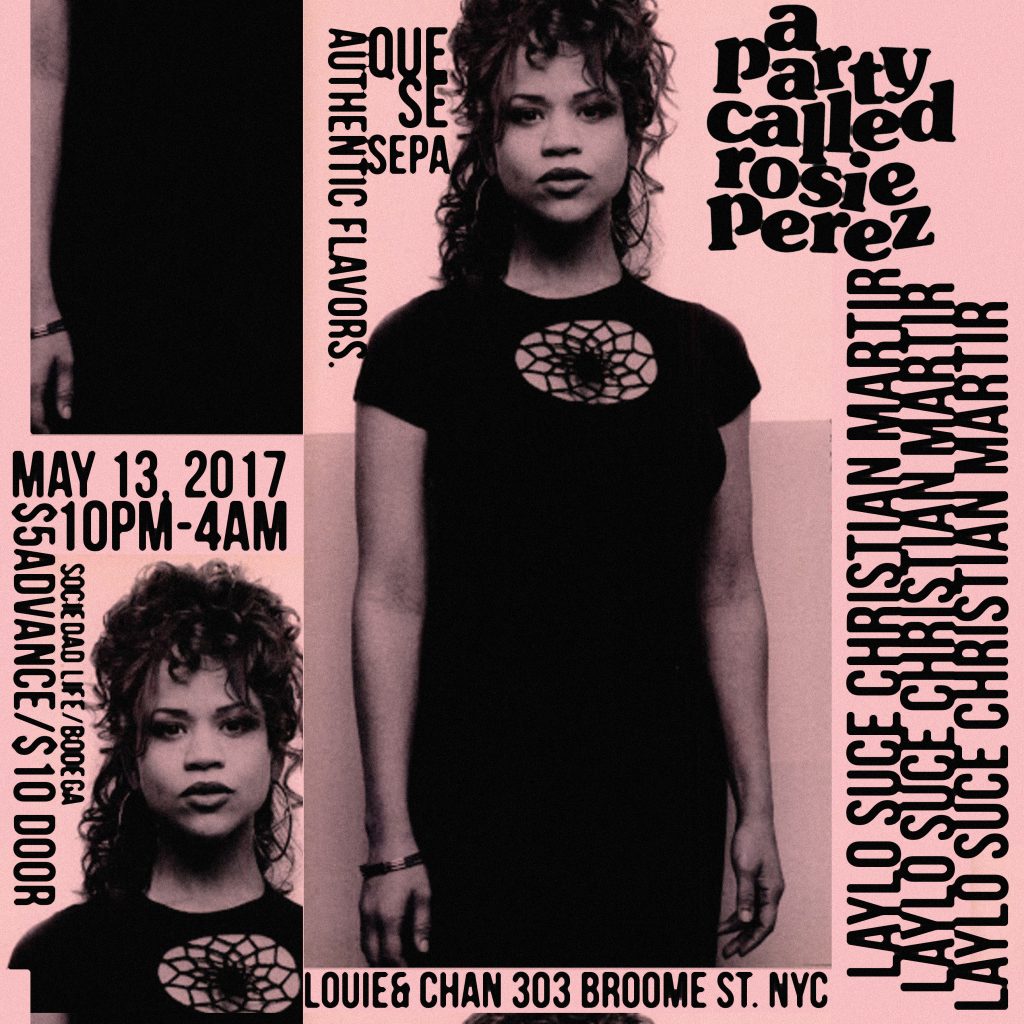