Puerto Rico’s AJ Dávila just dropped his new album El Futuro, a project our own Jhoni Jackson describes as a “celebratory burst” in dark times. In March, El Babysito wrapped up his cross-country tour with Crocodiles. To celebrate the release, photographer Kristina Bakrevski has shared a visual tour diary of their adventures. Peep the photos below.

All photos and captions by Kristina Bakrevski 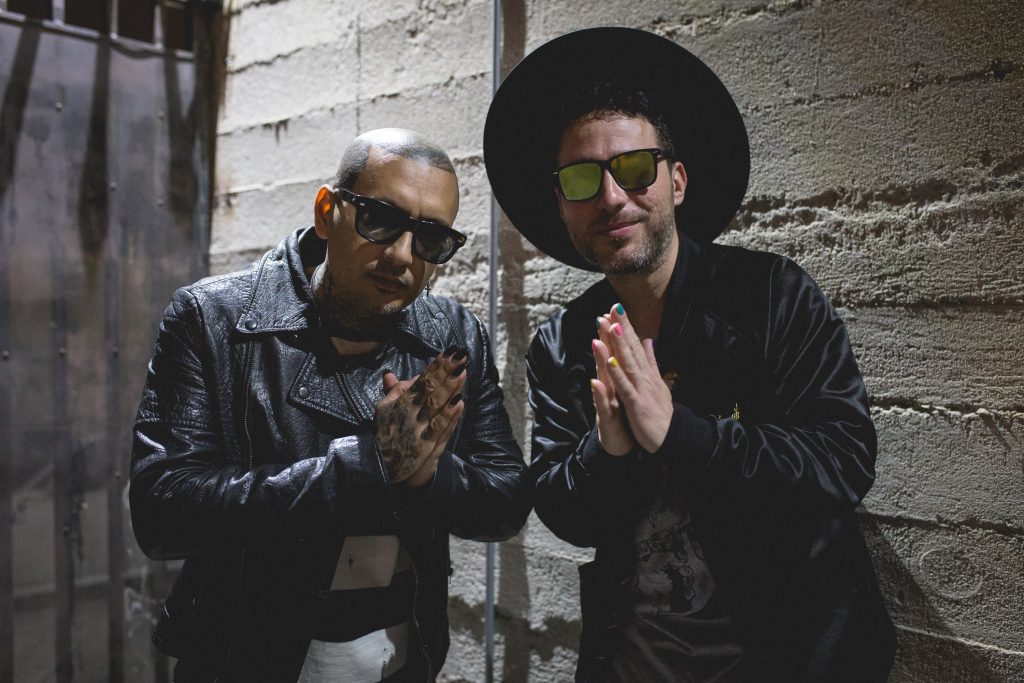 “Rafael Reyes from the cholo goth band Prayers and the guys in Crocodiles have been friends for over 20 years, growing up in San Diego together. ‘The Prayers’ was a name originally used by a previous band fronted by Brandon Welchez of Crocodiles, who would later give the name to Reyes. As a teen, Charlie (from Crocodiles) was a former employee of Rafa’s family-owned restaurant, which also happened to be one of the epicenters of the local punk music scene. It was at that spot where Charlie and Brandon first talked about playing music together. AJ Dávila had just met him at this show.” 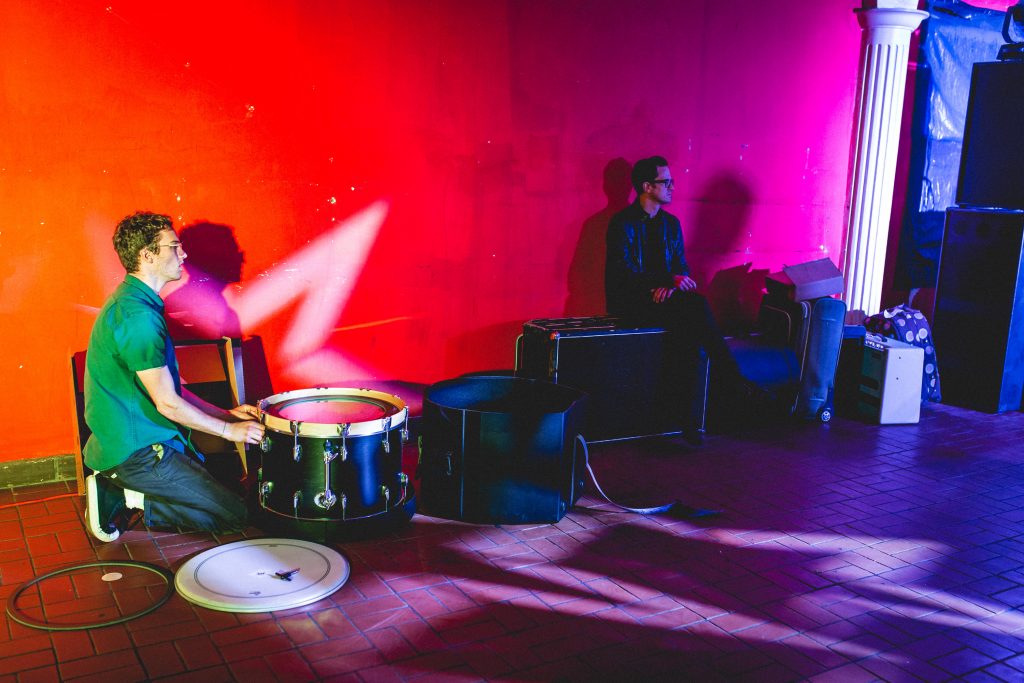 “Visiting Tijuana for the first time in over 10 years, I had no idea what to expect. I was pleasantly surprised to see how lively, colorful, and vibrant the nightlife was, pulsating with an electric energy throughout the city. After a killer show, we packed the van at 3 a.m. and headed back to San Diego only to be greeted by an overly-aggressive U.S. border patrol agent. Pro Tip: Don’t ever enter the Sentri lane without having Sentri, even if Google Maps tells you to. We eventually made it through, but learned that the hard way.” 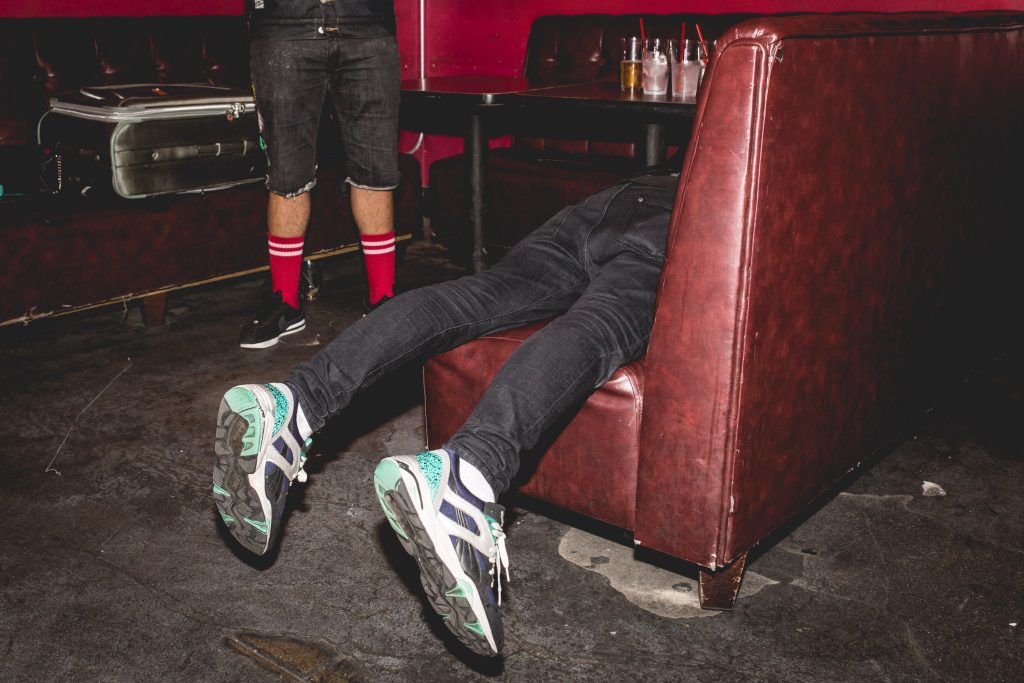 “Tour exhaustion is REAL. We all got sick the first week of the tour and AJ spent hours napping in the van just before his set. Despite a pestering cough, a splitting headache, and a prolonged hangover, AJ still managed to deliver a high-energy performance like a true champion. Then promptly went back to sleep.” 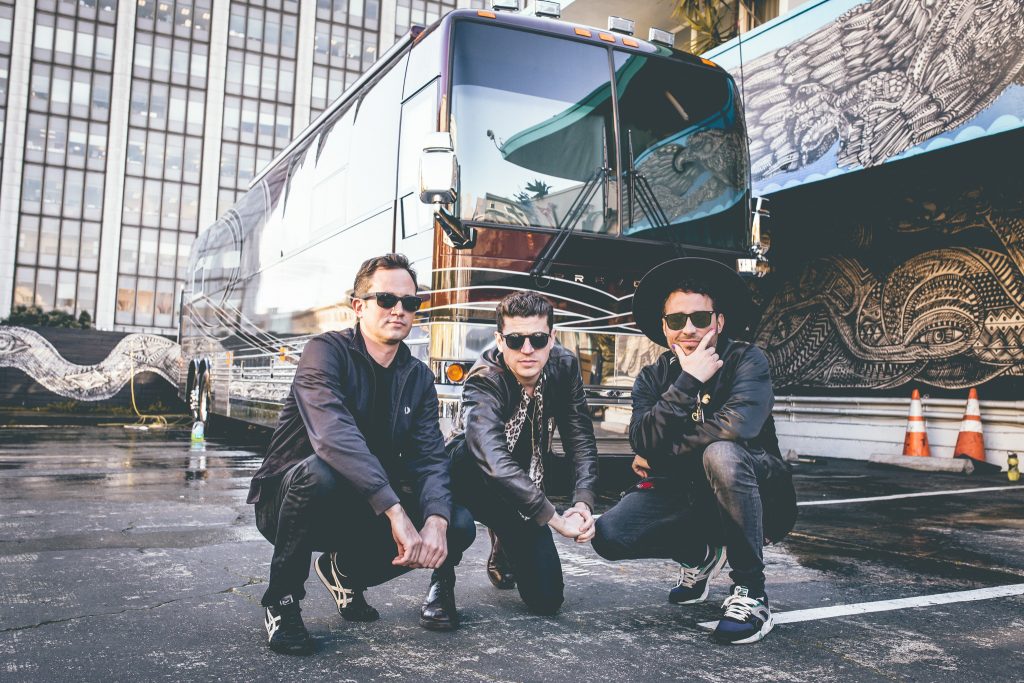 “In San Francisco, at the legendary Phoenix Hotel for the Noise Pop festival in front of a tour bus that definitely wasn’t ours. My best guess is that it belonged to Vince Staples or one of the other Noise Pop headliners. This photo was taken for the vision board.” 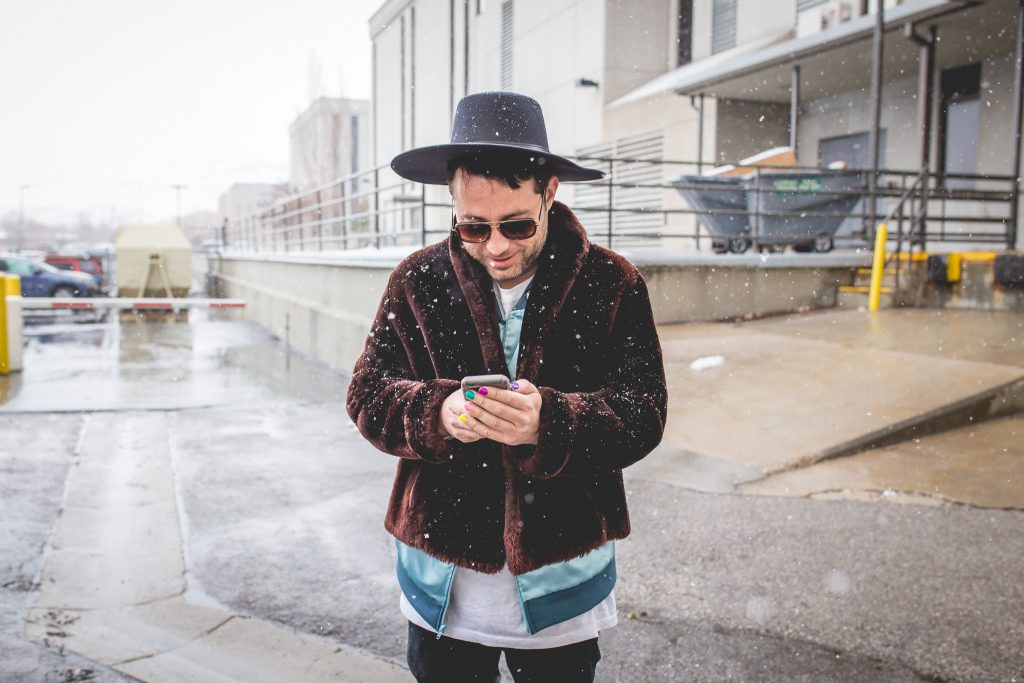 “‘AJ and His iPhone: A Love Story.’ For all the shit we gave AJ about constantly draining his phone battery, he does make it a point to actively keep in touch with his wide network of friends, fans, and extended family around the world. His Insta-stories were always the most entertaining, usually consisting of pranks, his many signature character voices, and otherwise A+ storytelling. This amazing fur coat was gifted to him by a friend on one of the tour stops.” 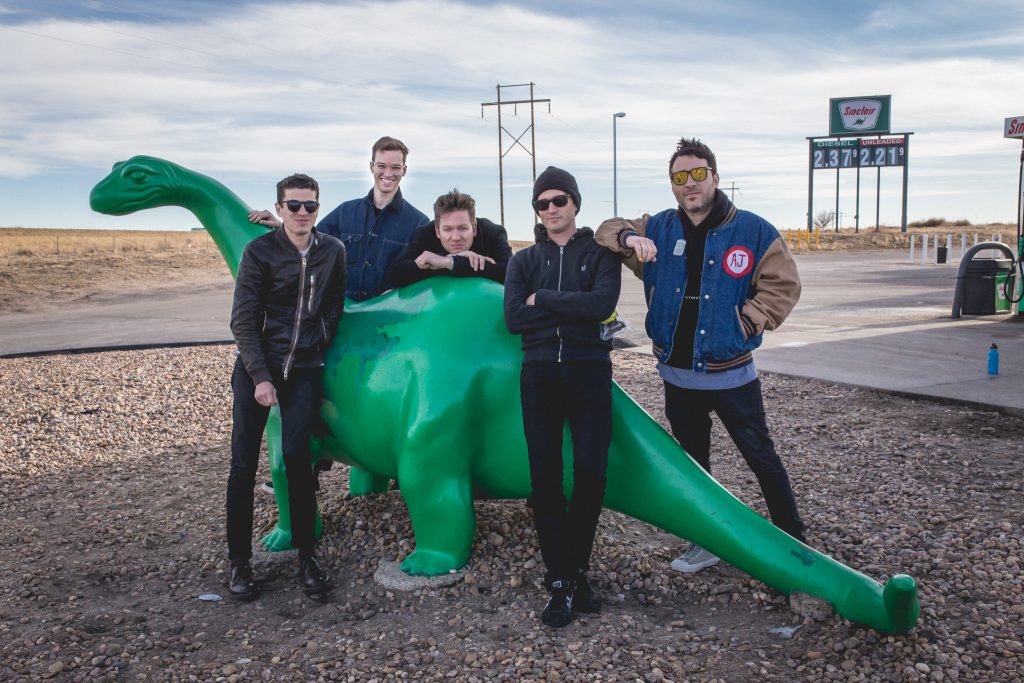 “Wandering the Mormon Temple grounds on a freezing cold afternoon, a kind woman approached and asked us if we would like a map. She asked us what we were doing in town and the boys said they were musicians on tour. Her response was a casual, ‘Oh my son is also an artist who tours. His name is Kaskade.’” 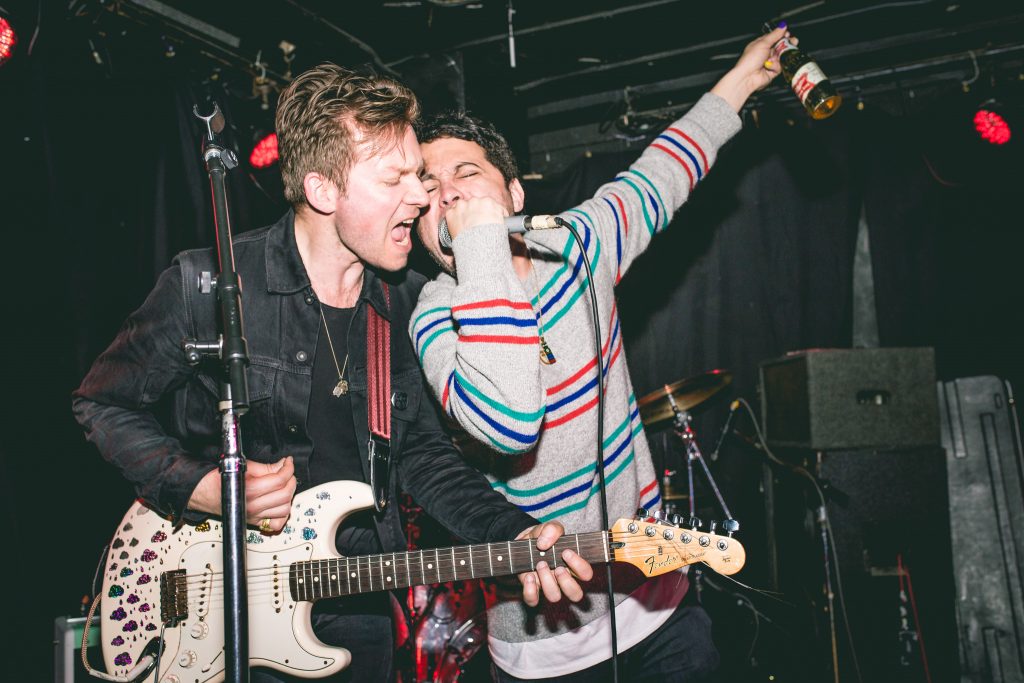 “A few days before the tour started, the guys had to make the gut-wrenching decision not to bring AJ’s backup band from Mexico, due to visa/immigration concerns. This meant meant that Crocodiles acted as AJ’s backup band/vocals. Additionally, the drummer and bassist were brought on just two days before the tour started. The silver lining was that audiences were graced with Charlie’s backup falsetto vox for AJ’s song ‘Mi Vida.’” 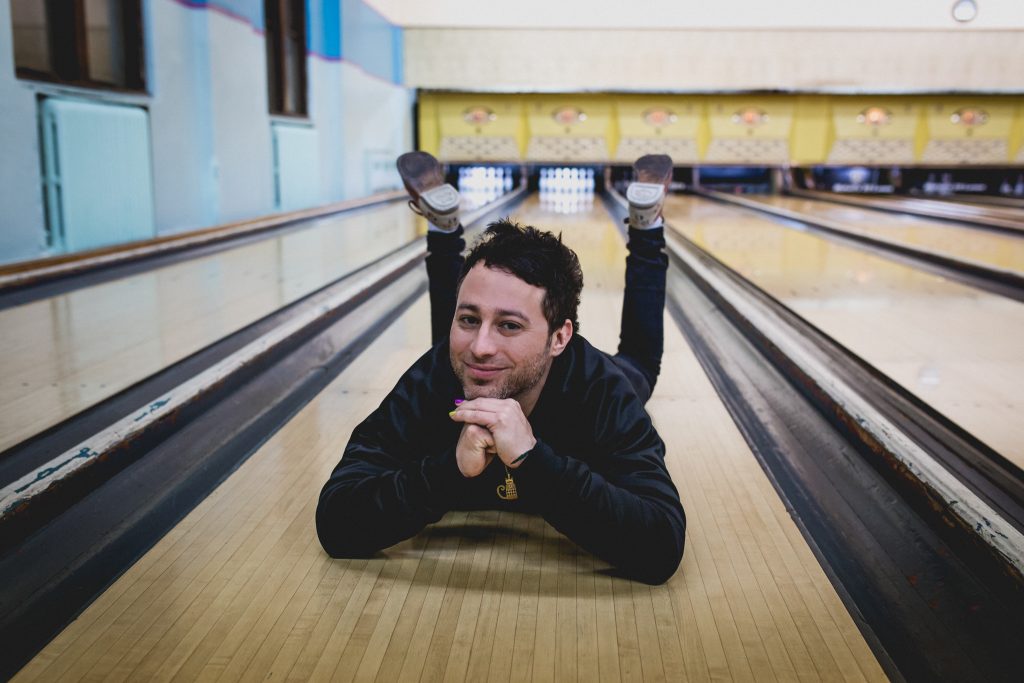 “AJ is always the most down to set up fun, impromptu photo shoots with, like slipping down a bowling lane for this promo shot. This one was his idea and we took several versions before settling on this one.” 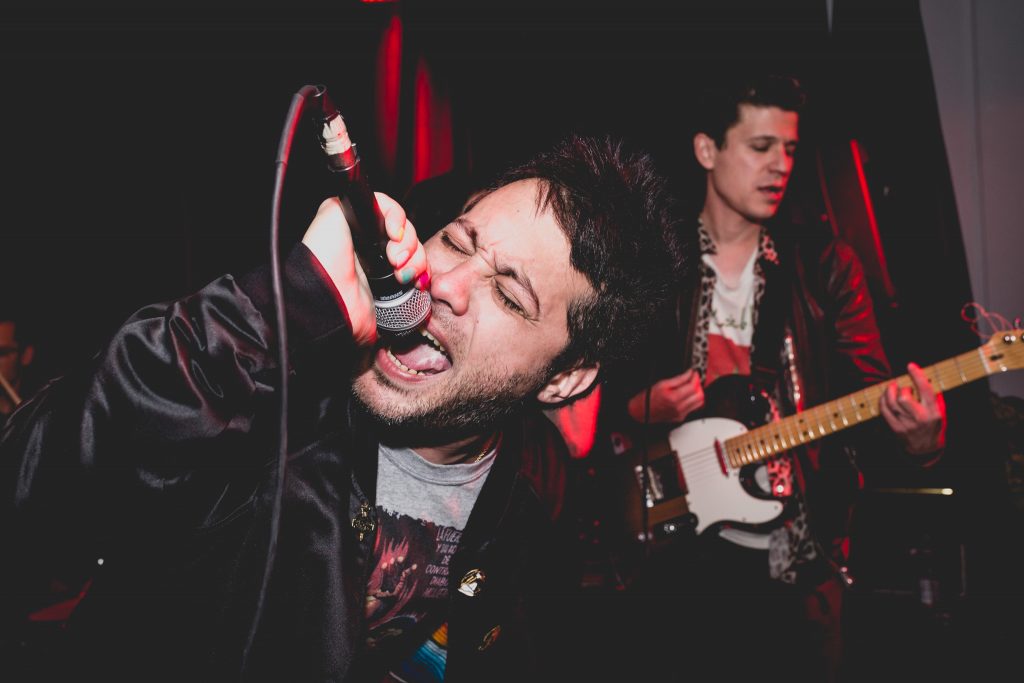 “Show no. 2 at Berlin bar in NYC, where AJ was found napping just moments before he was supposed to be on stage. The levels of turn up were at its peak during this tour stop, which included an hours-long boozy brunch followed by drinks at an arcade bar followed by dinner at a friend’s restaurant prior to this set. Still, AJ brought the party to the stage and the packed crowd was moshing & bouncing off the walls by the end. This was also the show where Crocodiles changed all the lyrics to their song ‘Jet Boy Jet Girl’ to ‘Fuck Donald Trump.’” 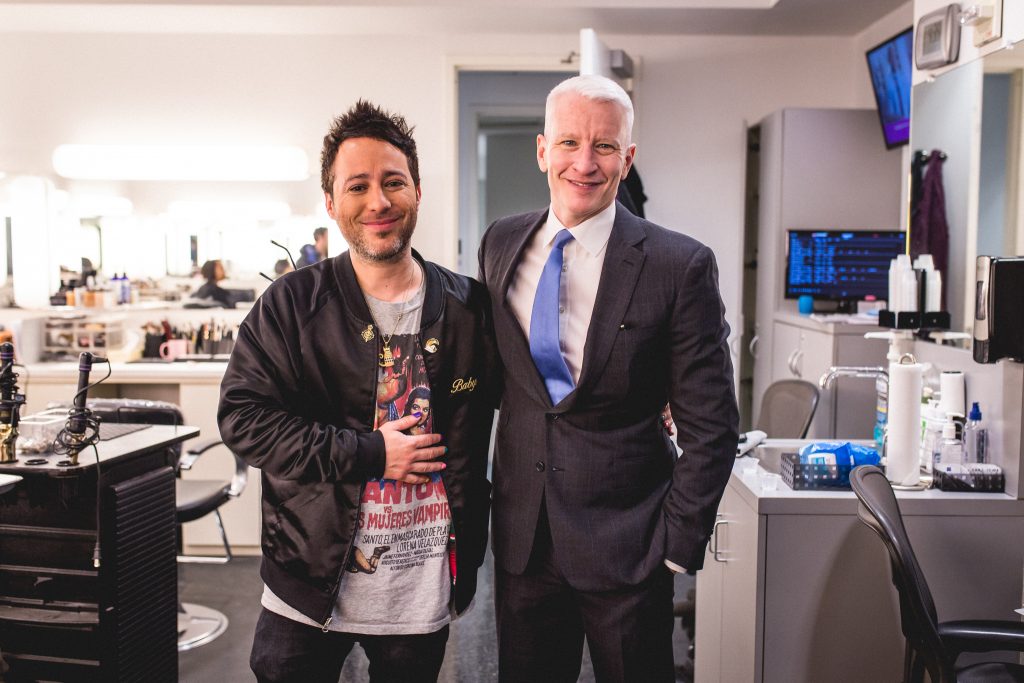 “AJ had an interview scheduled at CNN En Español and we walked up to the building joking about meeting Anderson Cooper. We must have cast a spell to the universe because the silver fox himself came in for a makeup retouch while we waited to go on air and graciously posed for a photo. AJ confidently broke the ice, because I was far too starstruck to ask for a picture.” 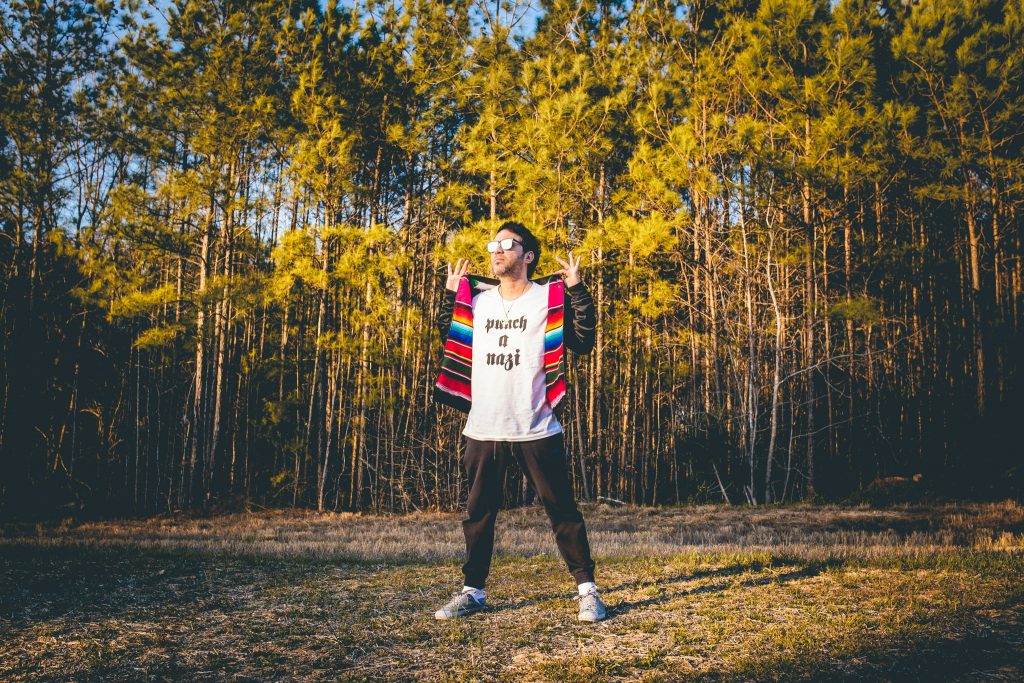 “Probably somewhere in North Carolina. AJ models our favorite shirt gifted to all of us by frontman OJ San Felipe of the NYC-based band Chorizo.” 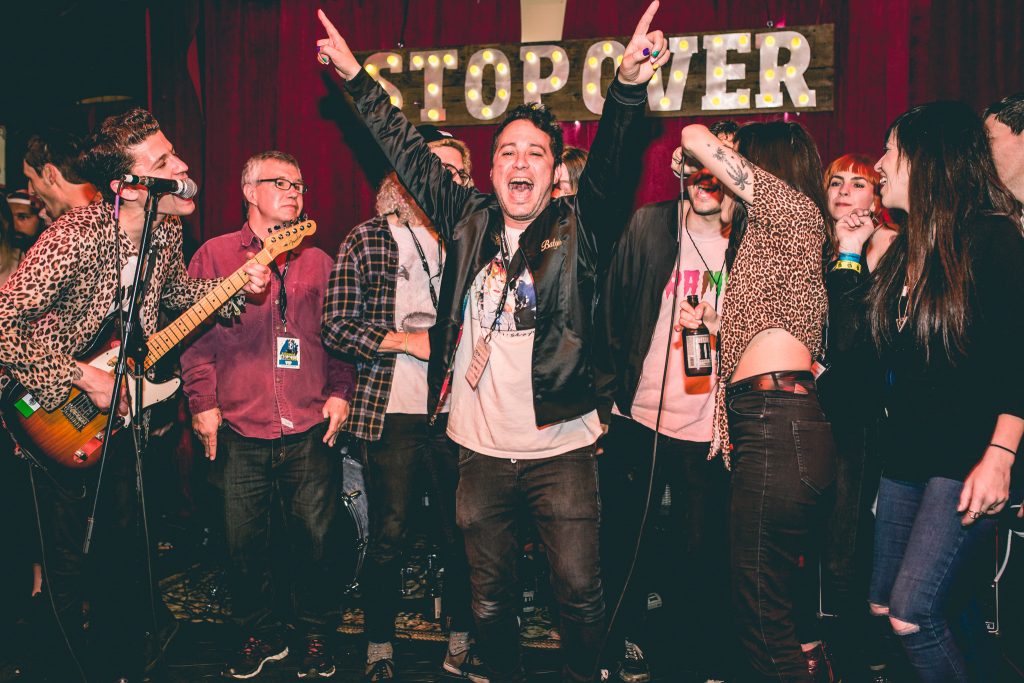 “AJ always performed with Crocodiles for their encore song ‘I Wanna Kill.’ This was at Savannah Stopover, a rad local music festival similar to SXSW (many bands, many venues) where the audience was invited onstage to close out the set. The show ended, but the party did not.” 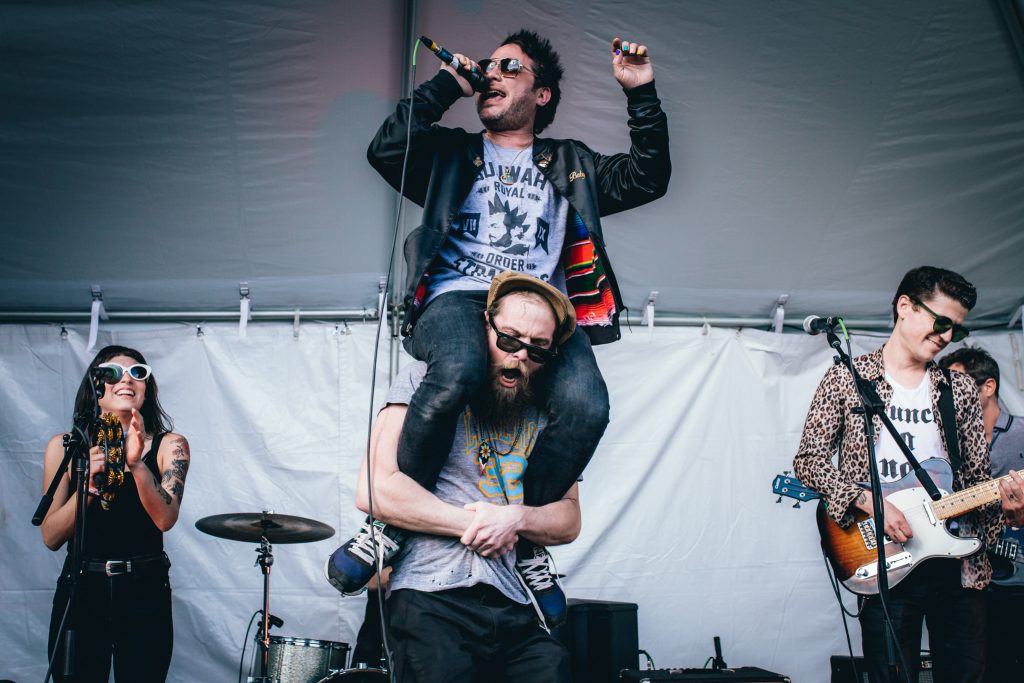 “Never a dull moment at SXSW. One enthusiastic fan rushed the stage and put AJ on his shoulders mid-song. Like a true champion, AJ never so much as paused, totally going along with the stunt and finishing out the song atop this super amped dude.” 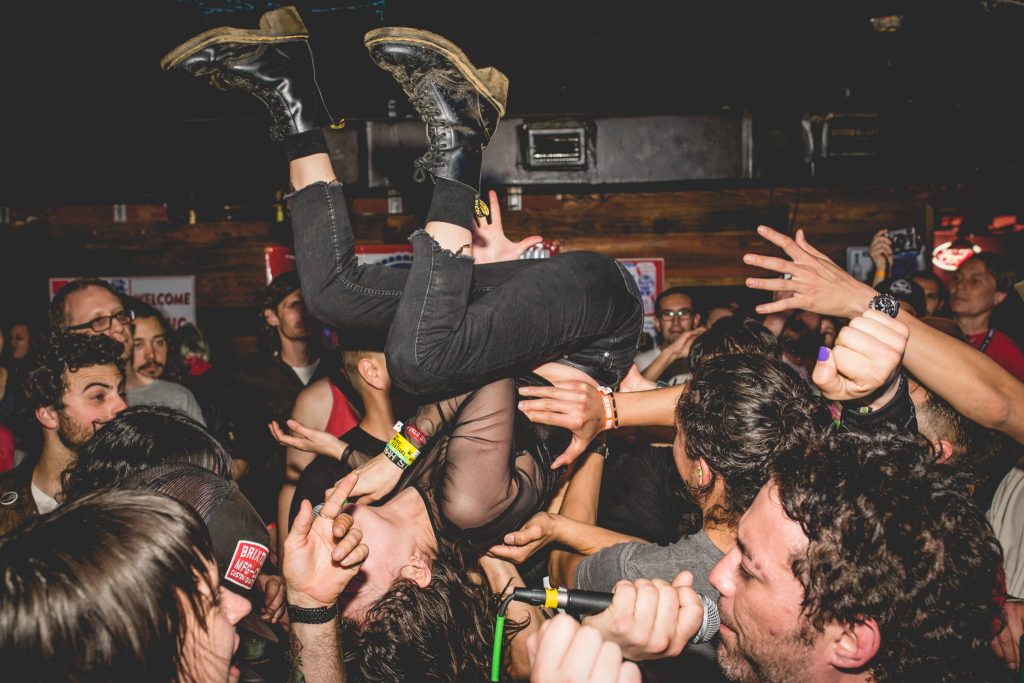 “This was the last song of the last show of the tour at SXSW. Lola Pistola, AJ’s collaborator and backup vocalist who toured the East coast with us, made sure to finish it all out on top. She was dropped right after this shot, but that didn’t stop her from finishing out the song like a boss.”

AJ Dávila’s El Futuro is out now on Discos Panoram.