A ‘Black Björk’: Jean Dawson Reintroduces Himself on ‘Pixel Bath’

By Stefanie Fernández
10.23.20
Photo by Nico Hernandez. Courtesy of the artist

“I can see you’re dead inside,” Jean Dawson repeats in a sing-song chant to the monster under the bed. Pixel Bath, Dawson’s follow-up to 2019’s excellent Bad Sports EP, is awash in mythologies of Dawson’s own creation. The album builds on the experimental foundations of its precursor, using arcane imagery of the devil, angels, and monsters to illustrate nightmares that land as lightly as a dream.

In the opener, “Devilish,” Dawson names the monster, reflecting on fathers, “big men,” and masculinity’s “crooked eye.” It’s an album interested in liminal spaces, reorienting crooked perspectives and replacing them with a desire to imagine futures outside of traditional power structures. That comes to life within an experimental pop framework inflected with Y2K-era alt-rock and internet aesthetics.

He calls himself ‘Black Bowie with a little Kobe.’

Dawson, born to a Mexican mother and an African-American father, grew up on the U.S.-MX border. He listened to everything from grunge to rap to Britpop to new wave to rock en español on his long bus rides from his hometown in Tijuana to school in San Diego. He states these influences on several tracks, like the standout “TripleDouble” with A$AP Rocky, where he calls himself “Black Bowie with a little Kobe” and on “Pegasus” where he calls himself a “Black Björk.”

Throughout the album, Dawson entertains nostalgia while remaining critical of it, venerating Black boyhood against the volatile masculinity that is socially and culturally engineered to harm it. “Boy, oh boy/I’m just a boy,” he lilts with tongue-in-cheek on “Bruiseboy,” a jaunt through dreams and the subconscious. On “Starface,” he repeats the phrase, this time turned elegiac by the tension he creates between internal life and external peril: “I live my life with my eyes closed/With my eyes closed… I’m just boy/I’m just a boy.”

Dawson’s greatest skill on Pixel Bath is his tonal subversions, juxtaposing the heaviness of the subjects of death, fear and trauma with playful ease and a dreamlike soundscape, unmasking the monster without diminishing its monstrousness. Freedom and escape are, necessarily, always in conversation. “Angel wings come out my back every time I leave outside my pad,” he sings on “Power Freaks,” reminiscent of the powerful closing imagery of his 2019 short film, Memory is Software. 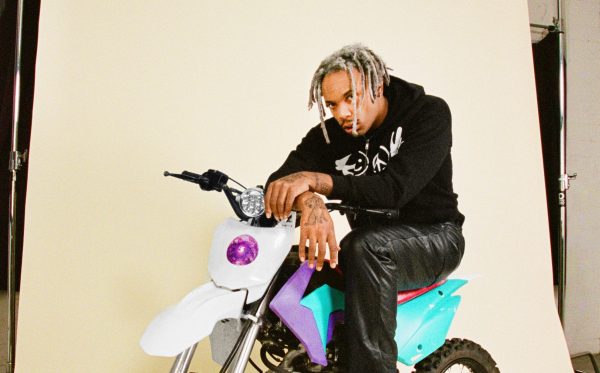 Death, referred to in various names, is one of Pixel Bath’s recurring characters. On “Clear Bones,” it’s “Mr. Reaper” with a gun and a black minivan with whom Dawson asks to play hide and seek. He also names it explicitly as the specter of police violence on the likes of “Pegasus” and “Policia,” a mainly Spanish-language call for solidarity that Dawson released in June with proceeds going to the families of Breonna Taylor and George Floyd as well as several bail funds across the country.

Dawson’s joy is his power.

Dawson’s joy is his power, brilliant and direct over a churning alt-rock riff: “Me vale madre/Soy feliz/f**k every single police.” Even on his most personal tracks, Dawson is always questioning power, and whether it can ever be created, or, like energy, transformed and repurposed. The dream ends on “Pyrotechnics,” an apocalyptic vision in which Dawson is “watching earth explode” before Samantha, a Mac text-to-speech tool, returns for the last word. With this impersonal simulacrum, Dawson refracts his own intimate meditation through an uncanny mirror, whose distance heightens the beauty, and complexity, of hope and decay. He isn’t afraid to sit with it as the present becomes the future: “It’s all beautiful… Hell on earth/Heaven in mind/Diamonds become sand/The sun explodes/It’s all beautiful/It is all beautiful.”