Devendra Banhart is a third-culture kid, through and through. Born in Texas, his mother moved with him to Venezuela, where they spent his childhood before moving to California in his mid-teens.

“You know, I really felt like an outsider for a long long time,” Banhart tells Remezcla. He was caught in the middle: a California kid in Caracas and a Venezuelan back in the States. So, like any kid wrangling with their identity, he developed his culture and art by cobbling together the resonant bits and pieces of his lived experience with the ones he dug into along the way.

Ma, his tenth album is an expression of the result of years of prospecting, a mixed bag fusing new loves and old ways coalescing into what he calls “an expression of gratitude to how mothering music has been for me and for my friends.”

Banhart sings his first recorded song in Portuguese confessing that he doesn’t really speak it yet, does a power pop piece in Spanish with an English hook, returns to his solo guitar crooning from his earlier records, dabbles in Japanese and of course, remembers Venezuela — his mother country.

“Qué porcentaje de gente con hambre/Es necesario pa’ que algo cambie,” he sings in “Abre Las Manos,” the second single on the record. He tunes the listener into imagining a waiting world of beauty, only to rip them from the reverie with a sobering reminder of the desperation around his beloved mother country, which he feels is “a perpetual source of suffering at this moment.”

It’s a damning couplet in the song’s last verse, phrased as a question, but serving as an annunciation of a pure desire the whole Bolivarian diaspora shares: to see their country return to normal, the country they remember, the country that nurtured them.

Venezuela is steeped in an intensifying humanitarian crisis, the result of years of political instability that can be traced back to the early years of Hugo Chavez’s presidency. Since Banhart’s 2016 record, Ape in Pink Marble, the situation has escalated. Nicolás Maduro, the current head of the regime, has censored journalists and contested the legitimacy an election he lost to Juan Guidó in January. Thousands have fled the country, most recently mainly to neighbouring Colombia, while millions of others who cannot leave are starving from food shortages and lacking in other basic necessities. Years ago it was just nail polish remover missing at salons, today it’s rice missing at supermarkets.

“A huge part of this album is kind of just dealing with the helplessness of not really being able to make any substantial contribution to lessening the suffering of this entire country,” says Banhart.The pain is multiplied by the distance and separation, invigorating the nostalgic adoration – a saudade of sorts – of a culture he was never able to completely call his own. His cousins, aunts and brother are still living there.

He took some of the pressure off the song in admitting: “On the last record there weren’t any Spanish songs, so I had to make up for it.”

Still, Banhart has found solace, particularly in the strength of community amongst Venezuelans and other Latinx people in the US, who have been brought together by the political and social nightmares both abroad and domestic. They create a sense of “hope that there is a life outside of the country,” he said, which now, at 38 years-old, cradles his Venezuelan identity.

In leaning into motherhood, Banhart may be seeking to heal by exploring all the parts of his identity that nurture him. Unsurprisingly, that’s inconsistent, although cohesive. And so, sonically, the record, a danceable effort, follows suit.

The record opens with “Is This Nice” a lullaby of sorts that grows into a pop chorus and promptly winds itself back. Pronounced picking mimic a Japanese Biwa or Shamisen. With “Kantori Ongaku,” meaning “Country Song,” he really leans into the country where he recorded the single.

Banhart’s work has always been steeped in Eastern culture – in fact, his name means “King of Gods” in Hindi, and was suggested to his parents by an Indian religious leader. “Ami,” the third track on the record is named after the eight-armed Hindu goddess Ambika, and could be about a mother offering advice to a child: “For now you’ve got to keep on playing even though/Nobody comes to the show.”

On “Now All Gone,” fuzzy, truncated bass notes punctuate his lyrical lilt similarly to his 2009 release What Will Be. “Love Song,” and the bilingual “My Boyfriend’s in the Band,” bring in a soft saxophone riffing through the tune, a new accent for Banhart’s music.

He explores grief in “October 12” and “Memorial,” – both songs feature just him playing guitar. The latter is a composite of three deaths he experienced closely to each other. To a tune reminiscent of Leonard Cohen’s “Hey, That’s No Way to Say Goodbye,” Banhart recalls the experience of visiting the subject of the song at the hospital on the day they died.

Between these two deeply personal pieces, sits his first song in Portuguese, “Carolina.” Banhart insists he doesn’t know anyone named Carolina. It’s a song for a song, more specifically Chico Buarque’s classic, and “by extension it’s an expression of gratitude to all Brazilian music and by extension all the South American music,” he said. “Eu deveria aprender portuguese/Algum dia” he closes it, ousting his guilt of failing his own lusophilia.

As long as Banhart keeps going on his “archaeological digs” for records, as he calls them, we should expect his music to grow more and more disparate, a method of therapy for the third-culture kid he recommends for the NRA, too.

“Like I’m going out there hunting … if somehow we could convince the NRA to just go record hunting instead, maybe it would reduce a little bit of the suffering on this planet.”

Banhart will be touring the United States in the Fall 2019 before heading to Europe in Winter 2020. 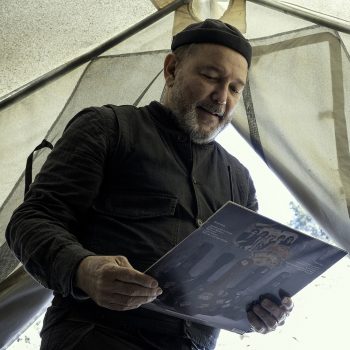