By Maria Sherman
04.12.17
Photo by by Hillary Jones/Redspecs

Any music industry veteran will tell you — the people who are best at finding exciting new underground talent are musicians themselves. When beloved indie acts Sad13 and PWR BTTM, a consent-pop project and rock’s queer saviors, respectively, cited Ohio’s didi as the band to pay attention to, we did — and came to find that one of its members is Latinx, a self-described Polish-Colombian.

Guitarist Kevin Bilapka Arbelaez is constantly thinking about his Latinidad. He thinks about it at home, in the music he makes with didi, and in his current job at a family center, where he’s a Hispanic/Latino Community Psychiatric Support Treatment (CPST) Worker, assisting children in Spanish-speaking households. “A lot of these families that don’t speak English will go to the schools and there aren’t Spanish interpreters. These parents have a big difficulty communicating – my job is to empower the families that I work with and open up pathways of communication,” Kevin explains. “Doing something that betters your community is important to my relationship with art — the art that I create wouldn’t be as rich to me if it wasn’t infused with the daily interactions I have with other people.” 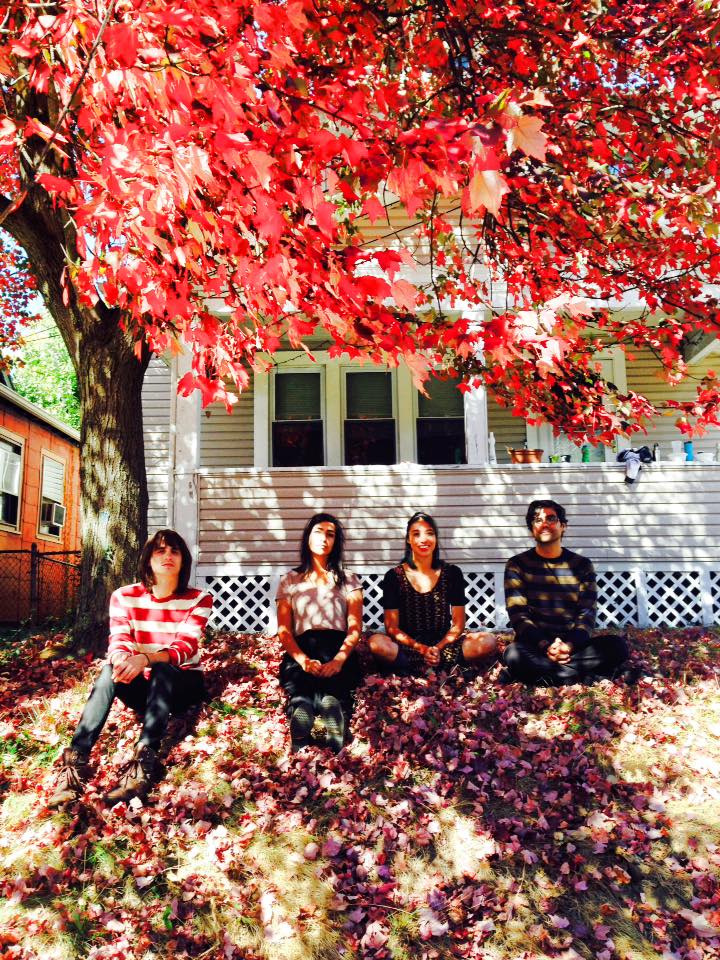 didi formed when guitarist Meg Zakany reached out to Bilapka Arbelaez, bassist Leslie Shimizu, and drummer Sheena McGrath. The quartet admired one another from afar in their Columbus music community, but it was Zakany who put the pieces together. The marriage worked; Bandcamp describes didi’s music as The Breeders meets Weezer, but it exists somewhere else entirely, too: a place of tension. It’s noisy pop music made by like-minded musicians, writing parts rarely greater than the sum but still autonomous. “It’s a band of huge personalities. We all have ideas of what we want to do and how we want to do it,” Bilapka Arbelaez says. “We’re able to come together in a place of love and growth — someone will bring a part of a song and we’ll work on it.” Beyond musicianship is a dedication to inclusivity and accessibility; this is a band that hopes to inspire marginalized voices.

“I think the Columbus scene is inclusive. We’ve never had any problems finding shows. I can’t speak for everyone; I’ve certainly heard of cases of a band trying to book a show at a certain establishment and maybe they’re told ‘We’re not sure if your music would do well here,’” Bilapka Arbelaez explains. In October of last year, didi played Melanincholy Fest, a free festival in their hometown aiming to inspire people of color to play music and showcase their art. Bilapka Arbelaez hopes it becomes an annual event. “We don’t have many things like that in Columbus, but it’s inspiring to see the community taking it upon themselves to give a forum for people to be able to express themselves.”

As a kid, Arbelaez found solace in music as a form of self-expression. He first picked up a guitar when he was 10 years old, after years of it sitting untouched. “The difficulties of being a kid and maybe being bullied and made fun of – I just wanted to express myself somehow and the guitar was there,” He reflects. “It felt really satisfying so I continued. It was always something I could just use to journal.”

“I always have to accept that I’m pretty sure I can pass for white.”

That journaling has the potential to become bilingual songwriting. didi records primarily in English — their self-titled debut LP is entirely en inglés – but the next one won’t be, he assures. “We have two didi songs in Spanish, one that will be on the upcoming record, and one that I wrote as a reaction to the election of Trump that we’ve been playing live. Maybe it will get recorded.”

“When I try to figure out what a song is to me, writing in Spanish is a lot easier,” he elaborates. “When I write stuff in English, I’m always thinking, ‘Where have I heard this before? Is this cliché?’ I grew up in the U.S. I know some things that my parents exposed me to, but I’m not super literate when it comes to Colombian or other Latinx literature — anything I write in Spanish feels brand new to me.”

Bilapka Arbelaez grew up in Massachusetts with his mother and stepdad, both Colombian. His father is white – a privilege he acknowledges openly. “When I have a conversation about privilege, I always have to accept that I’m pretty sure I can pass for white. I don’t think I’ve had many experiences where I’ve been called out for being Latinx. I’ve never been called out for my skin color. I haven’t experienced a lot of the negatives that come along with being a person of color,” he admits.

For Arbelaez, it’s a challenge to relate the world not knowing how others view you, even if you know how you view yourself. “It’s not quite feeling like I fit in here in the U.S., and then going to Colombia, being completely in love with it and my family there, loving the city, the nature, the culture, the art, everything, but then also being called ‘Gringo,’” he explains. “This is me. These are my roots, [but I’m] still not quite being accepted there. It’s not that I’m not loved. I am loved. But those feelings of being othered [exist].”

“Doing something that betters your community is important to my relationship with art.”

It’s an ongoing and confusing experience. “A really important book for me was Gloria Anzaldúa’s Borderlands, La Frontera. It was very empowering for me to understand that I’m not ‘a little bit of this’ or ‘a little bit of that.’ I’m not in-between Polish and Colombian. I’m both. It’s not half,” Bilapka Arbelaez explains. “I speak two languages. I can navigate many different worlds fluently. I work with Latinx families, I enter their homes and engage with them and their particular culture, their particular expression of Latinidad. That’s really important to me. At the same time, a lot of my friends are white and I’m able to navigate that as well. It’s something unique to my position.”

For now, Bilapka Arbelaez continues to work hard, both in assisting Latinx youth in his work within the Columbus community and in didi, where those experiences are brought to light. didi have entered an oversaturated indie rock climate, but manage to stand out by virtue of who they are and the music they make. Bilapka Arbelaez’s creative vision points to an ongoing movement to make indie rock more inclusive. We’d be wise to listen.