When tickets to the opening night of Medellín singer-songwriter and reggaeton powerhouse Feid’s now-famed FERXXO NITRO JAM tour went live, his three hometown concerts sold out within two hours. Not only had the singer fulfilled a lifelong goal – securing a headlining show at the prestigious Plaza de Toros La Macarena – but the event was in such high demand that he performed for three consecutive nights. Feid, who friends and fans lovingly refer to as Ferxxo, would go on to make history as the first artist to ever sell out three consecutive nights at La Macarena, performing to an estimated total of around 30,000 attendees. Eager to share the enthusiasm around his first major hometown show, Ferxxo opted for a big, bold, and Monster Jam-inspired angle but kept the details under wraps for months. 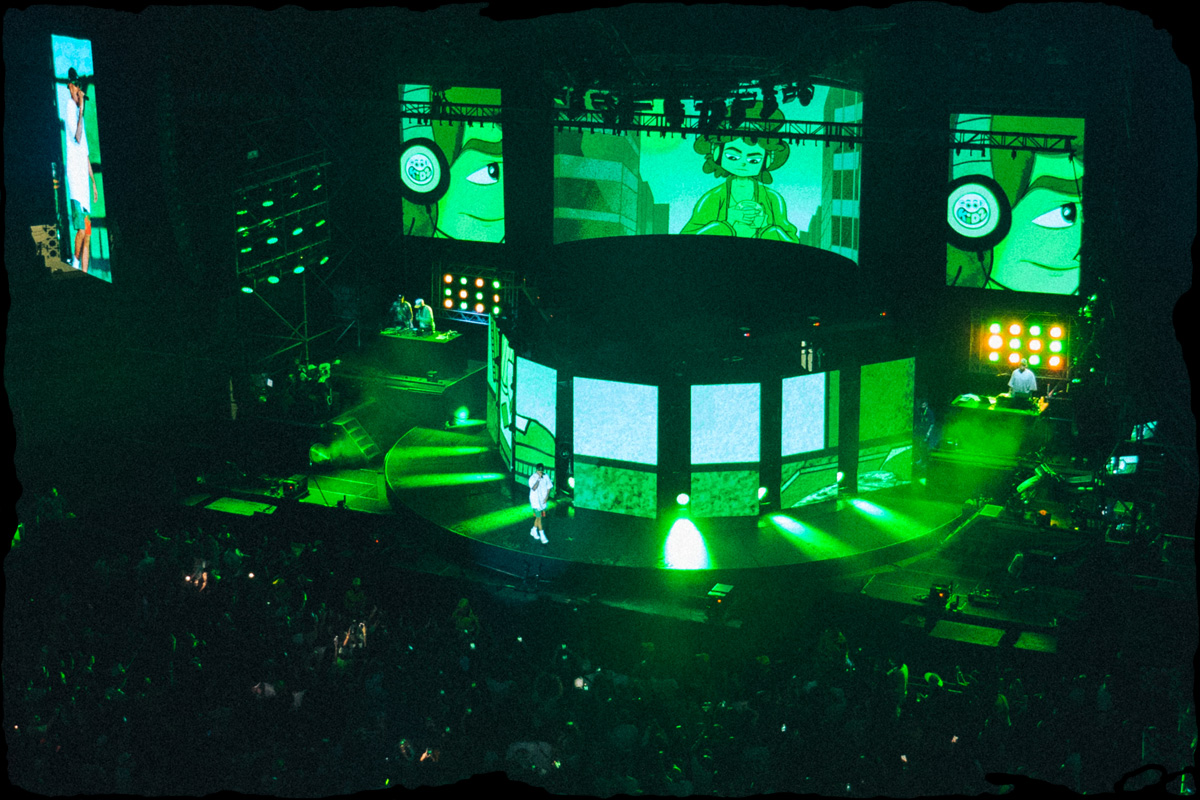 The vibe behind FERXXO NITRO JAM echoes Feid’s signature vivid technicolor aesthetic, but it stands as its own easily-distinguishable microcosm within the world of Ferxxo. Both innovative and inviting, creative lead Manuela Villada’s seamless curation resembles more of an art installation than a run-of-the-mill stadium show. Fluorescent green Victorian busts and customized neon signs reading “VIBES” greet concertgoers, and signage with tooth gem-donning a cartoon character Feid accessorizes what would otherwise be blank doors. Each detail circles back to the production’s motor-centric mood board: dirt bikes stand on display and monster truck toys accent tabletops in the VIP area, adding to its cohesive flow.

Remezcla spoke to the close-knit team that was instrumental in bringing FERXXO NITRO JAM to life. We chatted with illustrator and motion designer Manuela Villada, manager Luis Villamizar, DJ and producer Wain, DJ Sebaxxss, and production manager Miguel Escalona about their experiences with putting this next-level production together.

Longtime Ferxxo devotees have become familiar with the work of Feid’s sister Manuela Villada, who studied Graphic Design at the National University of Colombia. From creative direction and merch design to partaking in collaborative projects like the Inter Shibuya-inspired comic book, Villada has played an integral role in building the opalescent mini-universe that accompanies Feid’s music. Her art adorns the covers of Feid’s single releases, and she’s behind the illustration and animation in some of the singer’s visualizers, such as the one for “PURRITO APA.” “He’s always looking to convey his essence and communicate his style. Over the years, we’ve worked together to achieve that,” says Villada.

Villada upped the ante with FERXXO NITRO JAM’s visual elements by using eye-catching graphics and personalized imagery to create an immersive atmosphere for fans. Stickers and artwork depicting Feid’s trademark white Oakley shades with “FERXXO” scrawled across the lenses reflect those who show up dressed just like him. Colorful vinyl decals seen in bathroom mirrors reference slang and regional expressions popularized by the singer (“TUS VIBES SON CHIMBITAS,” “QUE VAMOS A HACER CON TODO ESO MOR”), persuading fans to snap mirror selfies, or in the case of some diehards, take the decals home as souvenirs. They’re subtle touches but effectively break down that wall between the performer and his audience. 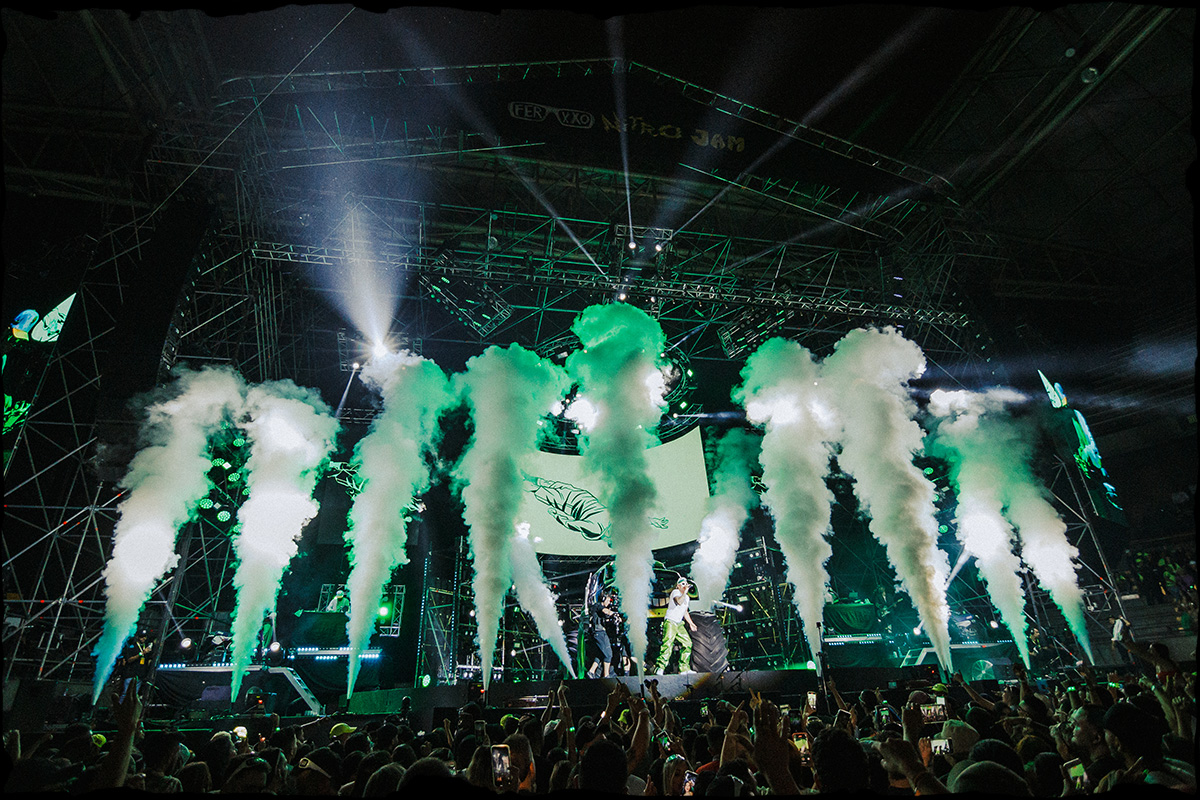 The Colombian singer’s love for the high-octane has also been a consistent theme throughout the visuals for his latest record, FELIZ CUMPLEAÑOS FERXXO TE PIRATEAMOS EL ÁLBUM. One look at the colossal, tricked-out hotrod doing donuts in the video for “Castigo” or a minute into the EDM-induced adrenaline rush that drives “Nieve,” and it’s easy to start connecting the dots. FELIZ CUMPLEAÑOS is steeped in the Medellín native’s daredevil nature and penchant for the extreme.

Funneling that energy into the atmosphere of FERXXO NITRO JAM seemed like the most logical next step, but it came with a set of challenges. Back in May, the team had initially planned to go with the monster truck seen in the “Castigo” music video and have it transported from Los Angeles to Medellín. But even with all of the permits and paperwork in order, the vehicle’s expected arrival date remained up in the air. Villamizar says he wasn’t willing to risk a central concept in the live show not making it in time for the three-night run at La Macarena. “Imagine how long it would take something with a motor that runs on gasoline – something so big that it comes in three separate shipping containers because it can’t fit in one – to get from the U.S. to Colombia,” he says.

About a month out from NITRO JAM’s opening night, he scrapped the original plan and troubleshot with Manuela. “I said, ‘Manu, we need a plan B. We need to design a monster truck, see how much it would cost to make in Colombia, and find someone who could do this. Could you come up with some measurements and take them to someone who builds cars? Do you think it’s possible? And on top of that, I need all of this within four weeks,’” he recalls with a laugh.

Villada then promptly took charge of creating the blueprint for the super-sized replica. She sketched out designs from different angles and drafted what the truck’s mechanical accessories and artwork would look like, down to the decorative ghostly grins and neon green flames on its sides.

“One day, one of the partners in our creative team told me, ‘Brother, there’s a gringo that lives in Colombia and does monster truck shows.’ When we went to meet him, the trucks [available] didn’t have engines and were old,” Villamizar explains. But, since they were now working with a three-week turnaround, they went with what was available. With Villada’s blueprints in hand and a connection to a shop in Bogotá that specialized in modifying cars, the team was on their way to securing their own version of the “Castigo” monster truck. 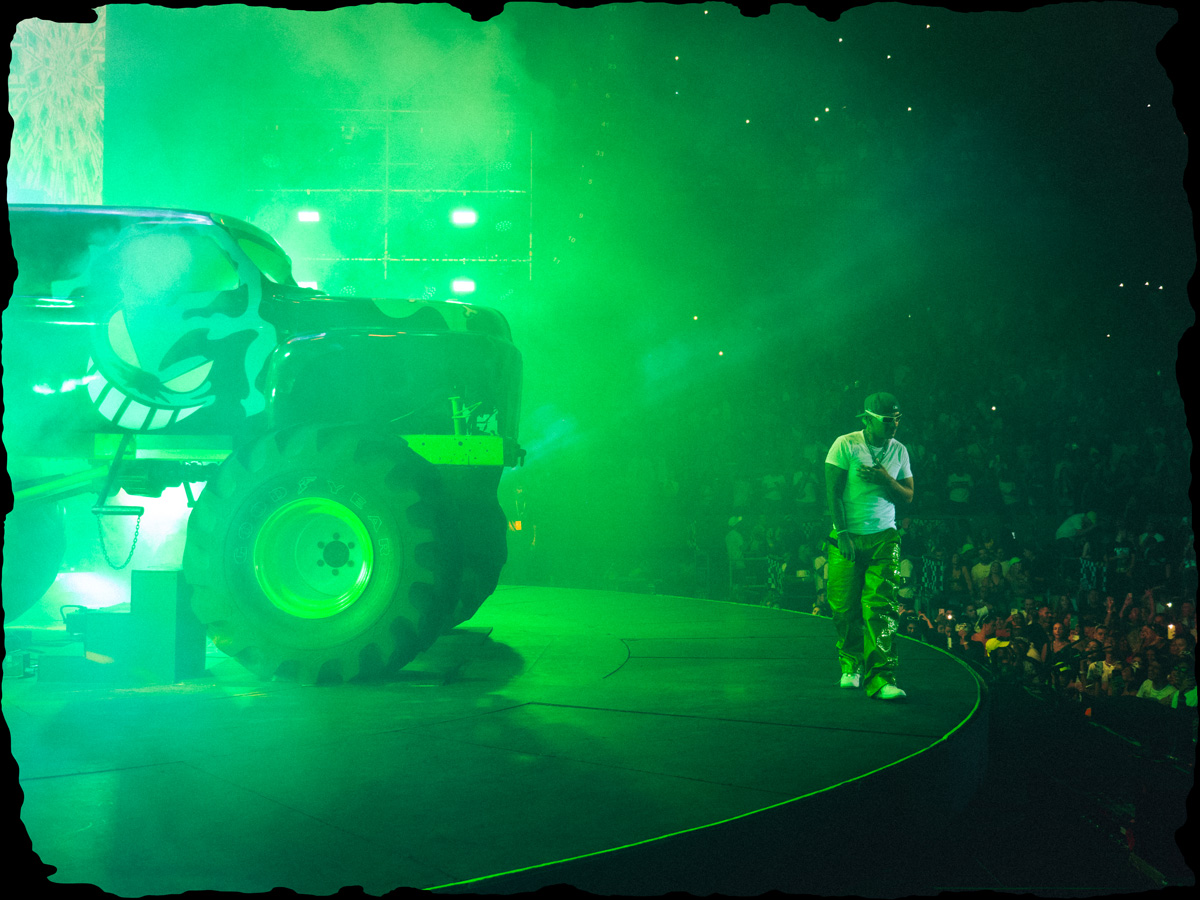 “There were many times where I asked myself, ‘How is this really going to look like the draft we made?’ The truth is that the result was better than I expected,” Villada notes. “Being resourceful was the key. I’m not sure if maybe it’s something very of our culture, that, sometimes, because of the lack of resources, you have to figure things out however you can… but it doesn’t matter if you don’t have the best tools at that moment or the best materials on the market. Be as resourceful as possible. Most of the time, we’re not going to have the tools that we think we need at hand, but we can make it happen.”

“Maybe it’s something very of our culture, that, sometimes, because of the lack of resources, you have to figure things out however you can.”

“I think this is the most ambitious project we’ve worked on with Feid,” says lifelong friend Sebaxxss, who operates as Feid’s DJ in various live settings like concerts and official after-parties. In keeping the crowd hyped, Sebaxxss worked on FERXXO NITRO JAM with another one of Feid’s longtime collaborators, sound engineer and producer Wain. “We like to give some dynamics to his vocals [in live settings],” says Wain, who has worked with Ferxxo for over seven years and processed the live mixing and effects for NITRO JAM. “We can add some textures and can filter or distort his voice, mess with special effects like reverbs and delays. It’s very satisfying because it adds something different to the show.” 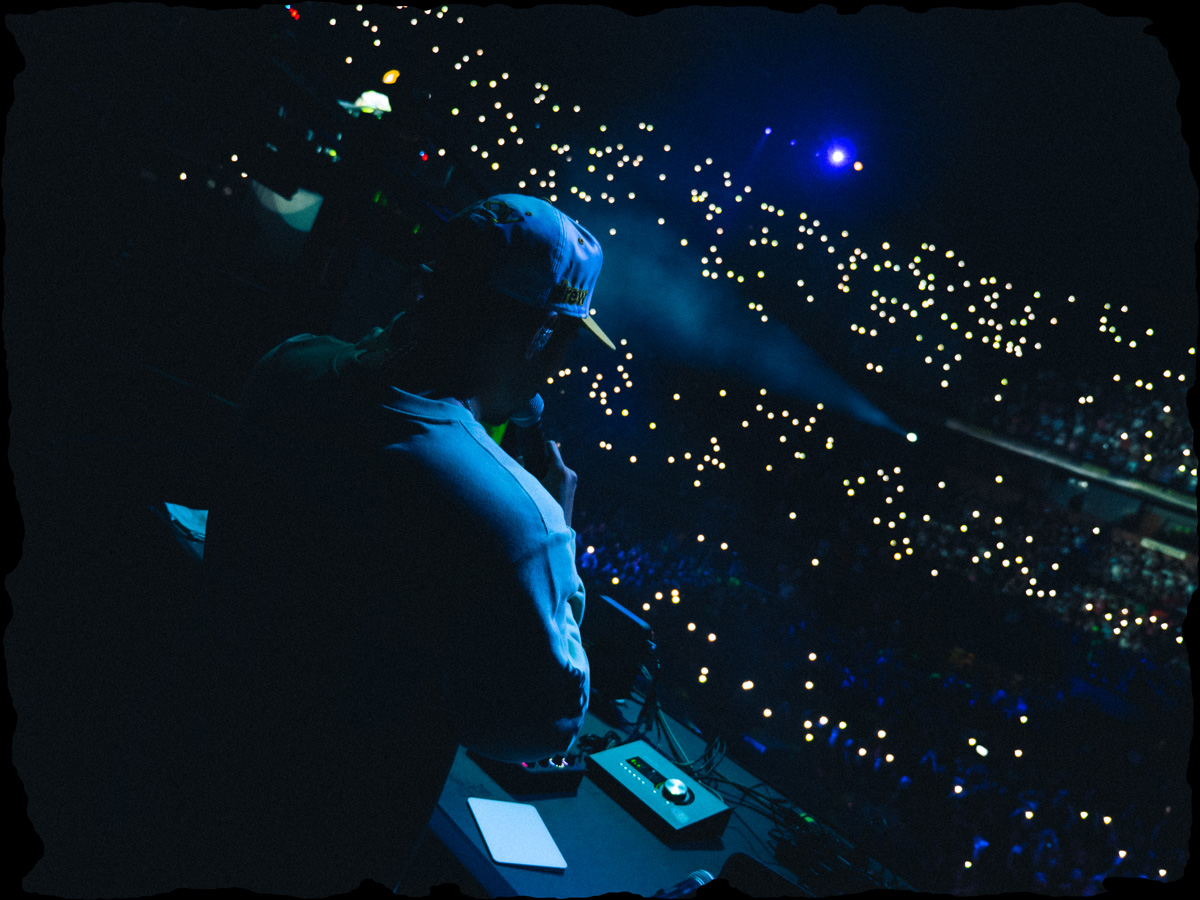 Additionally, Wain reworked some of the arrangements for a customized, live adaptation by building “PURRITO APA” up to a climax and supplementing “SI TU SUPIERAS” with a jazz trumpet solo to create a more intimate and nostalgic ambiance. “For ‘Castigo,’ we created this intro with a thunderstorm, and the monster truck is revealed to everyone on this part of the stage that’s spinning around,” Wain adds. “There’s this tension we build with sound as the monster truck is turning. People were going crazy there.”

“It’s been almost exactly a year since Ferxxo was opening on Karol G’s tour,” Sebaxxss mentions. “Between then and now, he’s really blown up… It’s incredible to see, and the love from the fans is felt by the entire team… That green [that Feid wears] has become a signature look on this tour. It’s also been about a year since the hashtag #ferxxomireligion came out, and honestly, little by little, it’s like it came true. People go dressed up in that same green or wear the sunglasses. It’s beautiful.” 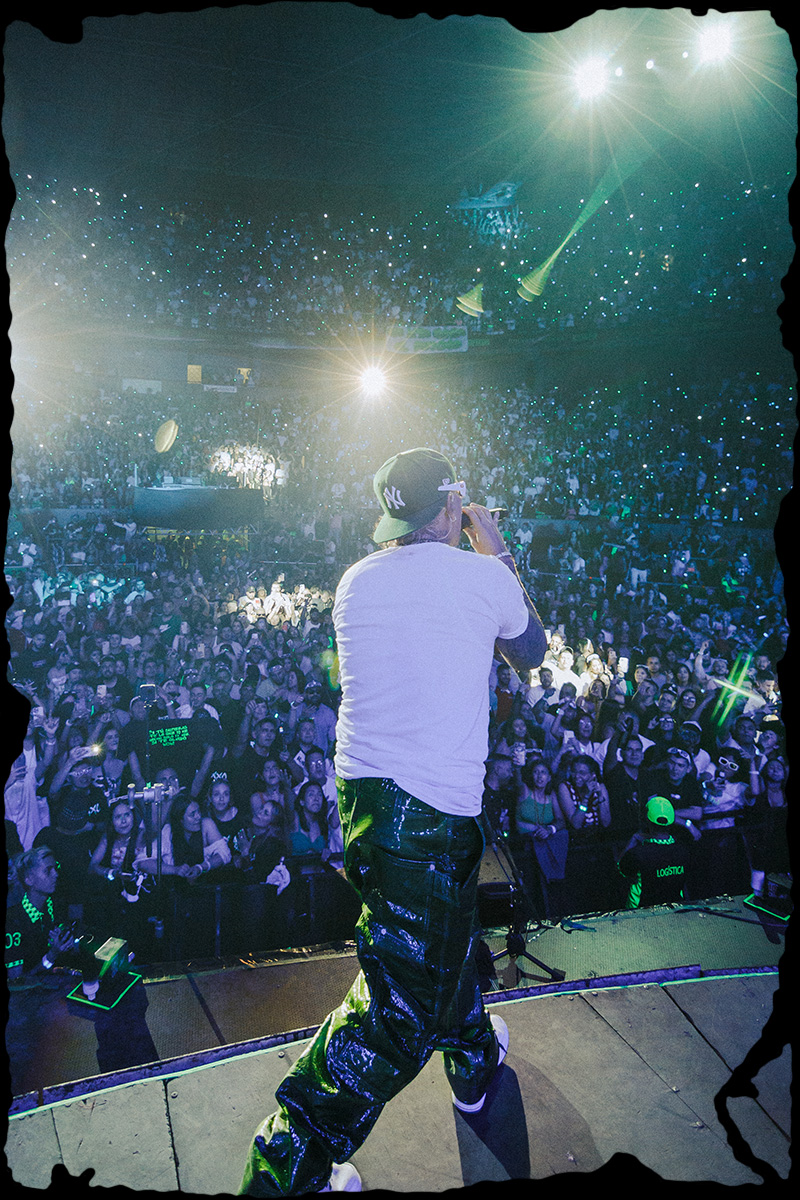 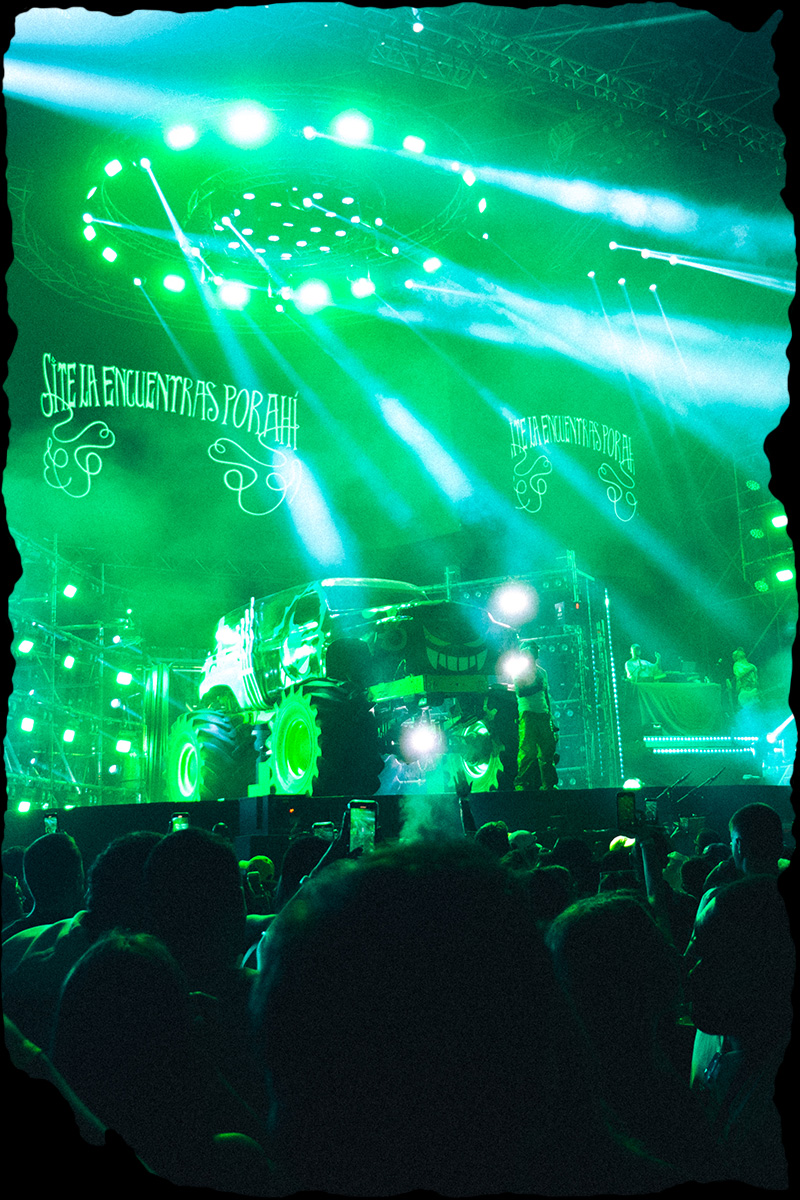 “It’s also been about a year since the hashtag #ferxxomireligion came out, and honestly, little by little, it’s like it came true.”

Escalona says it’s madness. “I’ve personally never seen such an enthusiastic crowd up close like this,” he recounts. “There are fans waiting in line at 8 in the morning when the show starts at 8 p.m. I had only seen that kind of stuff on MTV, on television.” He says his role involves spending a lot of time attending meetings and going over logistical details, so seeing the finished product and people enjoying it is an experience in itself. “It’s the greatest reward that comes out of months of hard work.”

Above all, it speaks to how the singer has transformed into a global ambassador for his beloved Medellín and the team’s commitment to putting on a world-class event for their community. In a pandemic-stricken touring industry that has become increasingly difficult for artists to navigate, a full-scale production put on by a close-knit crew of friends and family at one of Colombia’s most prestigious venues is an immeasurable success.

“[NITRO JAM]… was about welcoming people to our world.”

“[FERXXO NITRO JAM] is like our new baby…This was his first big show, and it’s been so different from the others because it makes you think about how we can give more in regards to the experiencing the show, besides just playing music,” says Wain. “It becomes about the lighting, the visuals, the whole stage scenery, the whole experience – it was about welcoming people to our world.” 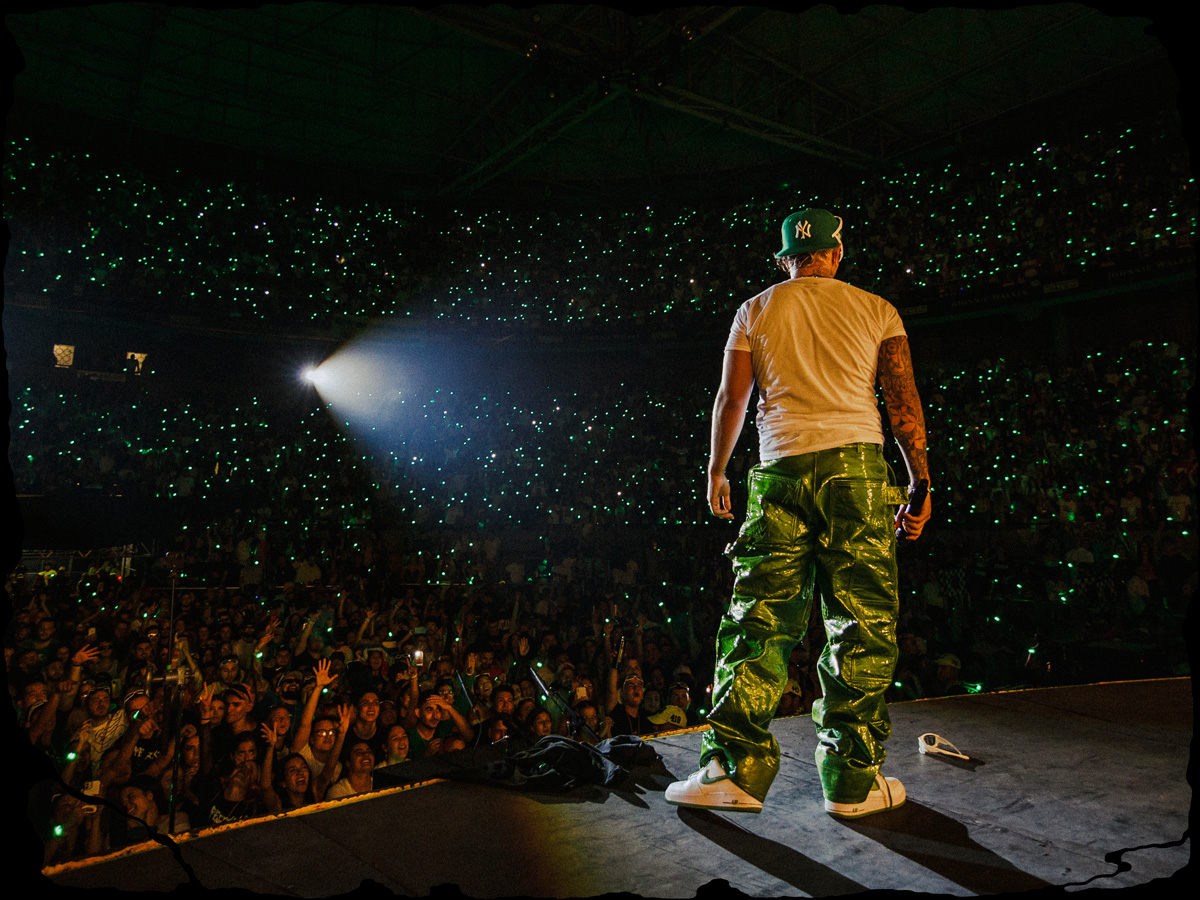