By Beverly Bryan
10.13.16
Photo by Itzel Alejandra Martinez for Remezcla

Danny Miller, singer and guitarist for Lewis del Mar, is at home in the two-room Rockaway Beach bungalow that he shares with his bandmate and lifelong friend Max Harwood, who plays drums in the band. “Every day, before I do anything else, I just walk down to the ocean and stand there for a bit,” he says. “I think what that is for me is just remembering that there is something greater than the details of life. There can be a lot of things that are bothering you, but it just reminds you that the minutiae that you get caught up in on a daily basis is so not an issue.”

Miller has good reason to stay centered. Earlier this year, his band’s first single “Loud(y)” was featured on Indie Shuffle, setting off a chain reaction that sent the song to no. 1 on the music blog aggregator Hype Machine. The duo was unsigned and had only just finished the songs that would make up their first EP. “I got a text from a friend that said, ‘Your song is trending on Hype Machine.’ Then it was this funny game where we were watching it and then it was no. 1,” remembers Harwood. Neither member had really paid much attention to the site before this, but the music industry definitely keeps tabs on it. Labels started calling. Since then, the 26-year-old musicians have been touring extensively with groups like Miike Snow and Foals, receiving praise from The New York Times and a profile in Billboard. They just released their self-titled album with Columbia Records. It hasn’t even been a year. 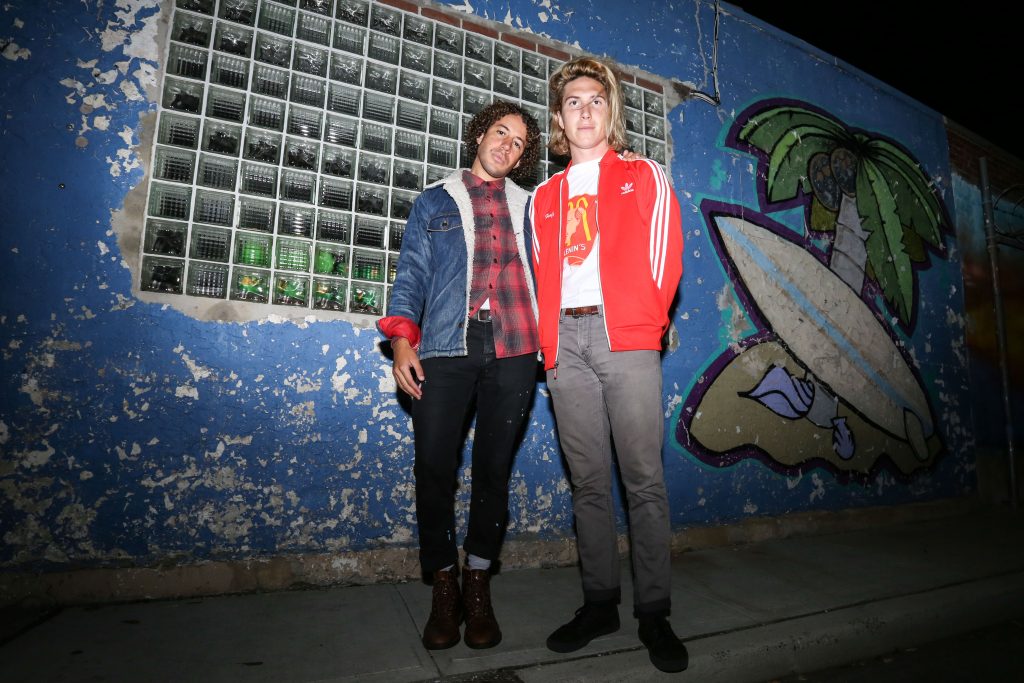 Even though Miller and Harwood are turning heads now, they’ve been cultivating that talent for years. The two musicians have been friends since they were nine years old and have been playing music together for almost as long. They grew up together on the outskirts of Washington, D.C. and toured with an earlier project that eventually fizzled out. After they both studied literature in college, their winding paths led them to move to Brooklyn together and, finally, to a two-room house. It’s there that they holed up to work on the songs that would become their first EP and debut album – for about two years.

“It’s where the city frays and clashes with the ocean. It seemed to embody what we were trying to do sonically.”

The Rockaways might seem like a strange spot for an aspiring band to park their gear, but it’s affordable and Miller and Harwood find the juxtaposition of the ocean and the urban environment inspiring. “It’s where the city frays and clashes with the ocean. It seemed to embody what we were trying to do sonically,” Harwood says of their attraction to it. “There’s a train and there’s apartment buildings smashed right up against the ocean,” Miller adds. The two friends are surfers and got to know the area through occasional wave-riding excursions, but their lives there have been more about deliberate isolation and obsessive fine-tuning than fun in the sun. Who knows – if the single hadn’t taken off, they might still be tinkering.

Their music is based in a guitar-and-drums set up, but draws a lot on hip-hop and electronic music. It’s hard to say what their music is exactly, except for bare and live as an electric fence, with bluesy guts and unpredictable rhythms. Miller’s sinewy voice and the chaotic assortment of samples collected by drummer Max Harwood are the reactive chemicals that make the songs on their EP and debut album throw off sparks. Some of Harwood’s samples are field recordings from around New York City; a lot of them are snippets of percussion ripped from vinyl by Latino artists.

They take inspiration from a lot of places, from Kanye West to Fugazi, but Latin American rhythms are a major touchstone for both of them. No doubt, it’s one part of what makes their sound so fresh; those rhythms are a subtle thread running through the album. Miller’s father is from Nicaragua and the songwriter grew up speaking both Spanish and English. Harwood learned these drum patterns from a jazz-loving teacher early on and says he’s gravitated toward them since. The two friends have road-tripped through Chile together in the past and put the finishing touches on the album in Cartagena, Colombia last year while visiting a friend from Bogotá. “We all went down to Cartagena together and rented a house and didn’t sleep for two weeks,” Miller explains, adding that Harwood finished the song “Tap Water Drinking” after watching a drum circle in the square of the coastal Colombian town.

Some inspirations are more personal. Miller wrote the song “Puerto Cabezas, NI” about visiting the region (his father’s hometown) for the first time this past year, an experience he describes as “very significant.” He had previously traveled to almost every country in South and Central America, but, until this past year, had never been to the town on the Caribbean coast of Nicaragua, mainly because his parents are separated and his father suffers from severe mental illness, something Miller has struggled to come to terms with. When he visited, he got to spend time with extended family and people who knew his parents before he was born. In the song, he sings, “I finally found the rest of me.” It’s a powerful statement. “I walked away feeling that it was a part of me. I went there and all of a sudden my sense of self just pivoted and I was, like, ‘I get it.’ I could understand its origin better.”

Right now, though, the two friends are both in a Rockaway Beach state of mind, before they launch into their first headlining tour. For them, it’s a peaceful state of mind informed by the patience and humility that the ocean has to teach people, especially people who surf and therefore learn to watch its moods and wait for the right conditions. “Some days are out of your control. Some days are better than others and you just learn to think ‘I’m going to be out here again tomorrow and it’s going to be a different experience.’ The ocean very literally is different every day,” Harwood says, reflecting on the sea’s influence on him. In other words, whatever comes their way next, Lewis del Mar is ready to ride it out.