Luna Luna Is Inspiring a Generation of Pop Lovers That Look Like Them
Search
Music
Presented By:

Love songs—like love itself—can be complicated. For the Dallas, Texas band Luna Luna, you can say that writing and putting them out in the world has been a conflicted occurrence, but it’s all worth it in order to bring their audience the perfect melody to keep close to their hearts. Formed in 2017, Luna Luna made an instant impression ever since they started playing their first house shows. Their lovelorn synth-pop ballads and quiet dance numbers—influenced by Latin American crooners, salsa, R&B, and contemporary pop—gaining them a following even beyond their immediate frontiers. Flower Moon, their latest album, is their most fully developed work to date, displaying a great variety of influences and airtight songwriting. It’s the end of a journey and the beginning of a new exciting chapter.

Luna Luna began as a solo project for Kavvi yet soon expanded into something bigger: “I came from Colombia when I was six; my mom was a missionary for the church,” the singer-songwriter tells Remezcla. “She always showed me a lot of salsa, merengue, and cumbia. I remember really liking all this music, and soon enough, music became my favorite thing.” Finding the means to translate his passion into a craft, Kavvi turned to his phone, finding sounds on the GarageBand app to express his feelings while working as a phone service salesperson at his local Walmart. “I just gravitated towards warm sounds,” he explains. “It was a little lonely growing up. Deep down, I wanted [to] love, so the songs [I was writing] were romantic. It was kind of healing for me.”

At some point, Kavvi was invited to play a show which prompted him to find musicians to back him up through the Dallas independent circuit. After many members came on board and left, the current lineup of Kavvi, vocalist/keyboardist Danni Bonilla, drummer Kaylin Martinez, and bassist Ryan Gordon came into place.

Luna Luna made quite an impression from early on and has coalesced into an even greater artistic outfit, thanks to them becoming a band in every extension of the word. “When we were playing house shows getting our feet wet, I could just tell right away that we affected the audience in ways that I haven’t seen many other bands do,” says Gordon. “I could just tell, ‘Whoa, we have chemistry.’ It’s something really crazy to think about.”

Playing on the DIY scene was integral, not only in shaping their music but also their chemistry. However, they have scaled up to bigger stages without imposing limits on themselves. “It’s definitely a more intimate, raw feel,” says Gordon about playing those kinds of shows. “It’s like, ‘OK, anything could happen.’ It’s just a really intense atmosphere at times. As we continue doing these bigger and bigger shows, we have to amp up our sound, get new gear, and expand beyond that soon.” “Personally, when I write a song, that’s just how I like to write them,“ Bonilla continues. “I imagine playing it in a stadium. That’s what I hear in my head.”

According to Kavvi, the band really came into their own with the recording of Flower Moon. Writing for the album began during the first lockdown when everybody was isolated from each other; it may be surprising to learn that this experience was a very positive one for the members of Luna Luna. “I think we did get a lot closer during the pandemic,” says Martinez. “And I think during that time, as we were connecting more intellectually, we were able to articulate what the ideas we had for the album a little bit better. I think you can hear more cohesiveness throughout each song, even though they are a little bit different in theme. I think it all kind of goes together.”

“We started to really value each other’s presence in our lives, and I think we really wanted to maintain that relationship,” Bonilla complements.

A lot of these feelings are reflected in the songs of Flower Moon. “The songs kind of go up and down,” says Kavvi. “There are upbeat party songs and then there are other songs that are a little bit more mellow and sad. They both ended up being about missing people, doing stuff with friends, and missing that feeling.” A key inspiration that helped unlock the rest of the album came from learning to listen to nature, the song “Flower Moon” was written about Kavvi trying to communicate with the moon. “Sometimes you don’t know how to express what you’re feeling, so then you put it in a song,” he says.

Although Luna Luna has left behind the living room and backyard shows in favor of bigger venues and currently works with a team behind the scenes, they remain a bedroom recording project. Although the band still encounters some bias in that respect, Kavvi notes that the prejudice has weakened, noting the Grammy-winning production work of Finneas with Billie Eilish. While most of the sessions took place at Kavvi’s house, there was some work done with another producer in a studio in the small town of Spur. Coincidentally, this session happened when a snowstorm hit Texas, leaving Luna Luna stranded in the studio but mercifully left with power. It effectively forced them to stay and seize the opportunity. “We got to stay there for a while and just work on music,” says Kavvi. “Eat and hang out at night and then wake up and do music. It felt like a music boot camp.”

Being snowed-in—not to mention during a worldwide pandemic—is just one of the hardships Luna Luna has had to endure on the way to deliver Flower Moon. Yet, their mission as well as their main motivation remain clear. “Our foundation is sturdy,” says Kavvi. “We all have the same path and I think that’s what has helped us stay together since 2017,” Bonilla continues. “It’s the little things that really bring us together. Like drinking and playing video games together, getting food, it’s not just the music thing. Because there’s a lot of love with each other and also with our fans. There’s just so much love circulating. I think that’s what it is to be a band, just to have a lot of love.”

The love fans feel is a particular one. The majority of Luna Luna followers are Latine, something not lost to the members of the band and something that brings a special energy to their shows. “Seeing a bunch of people in the crowd that looked like us really impacted us,” says Kavvi. “Because I would see that the streams were growing, but I didn’t really know who was listening. So when we started playing shows and seeing a bunch of Latinx faces, I’m like, ‘Oh, it’s our community that’s supporting us.’ So yeah, that’s something we’re looking forward to; seeing people in cities that have never seen us before.”

“Seeing a bunch of people in the crowd that looked like us really impacted us.’”

Luna Luna is part of a new generation of Latine pop artists speaking for a young generation of listeners ready to fall in love or having their hearts broken for the first time. The band is bringing a unique sound that perfectly captures what it means for their audience to be themselves.

“I feel like it’s the best part about doing what we’re doing,” says Kavvi. “I grew up here and there’s a lot of kids that grew up here, so they get the culture from their parents, all the Spanish music. But they also get all the English stuff just by living in the United States. So I think it’s because of that that you see all the artists now that are [making] bilingual music. That’s definitely why our music sounds [this] way. It’s a clash of cultures and it has made a beautiful baby, and we are that baby.” 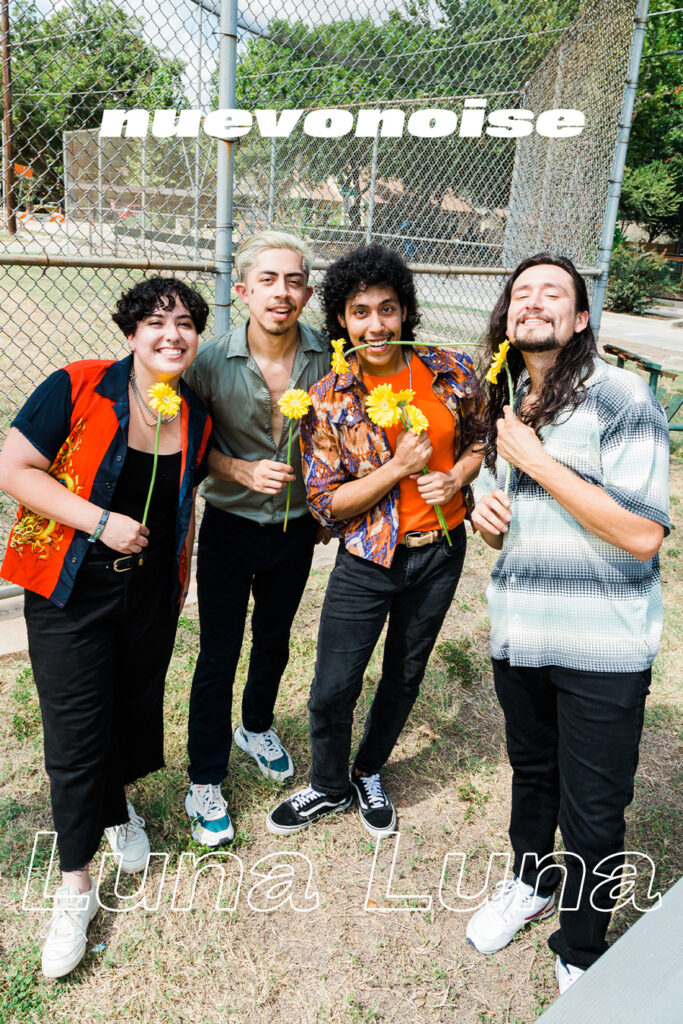