By Jhoni Jackson
06.19.17
Photo by Supakid. Courtesy of the photographer

Née: Joséan Alicea
Raíces: San Juan, Puerto Rico
Sounds like: A revelation of the self, shared and celebrated.
You should listen to Mau Lynx because…drumming dexterity truly makes for the snappiest take on chillwave.

It took a dedicated period of introspection for Joséan Alicea to get to the next phase of Mau Lynx, the electronic pop project he’s been cultivating for the last three years. Much of the past two were spent ruminating and pondering; Alicea needed to get to know himself again. That’s an inherently personal process, yet it ultimately led to creative collaborations — and the end result, Next Year, is wholly enriched by its guest appearances.

It wasn’t a first for the Puerto Rican musician: In May, he debuted a split with local chillwave-adjacent, electro-disco explorer Labajura, and he works alongside post-punk act Lust Era as their live-show drummer. On this second Mau Lynx release, however, Alicea offered generous reins to his co-creators, relinquishing control to a degree that surprised him.

Caithlin de Marrais of Rainer Maria is one of those collaborators — the remote vocal guesting of the Brooklyn-based indie stalwart on opening track “FED” is ghostly but earthly, tethered by the opaque but pounding electronic drum beat Alicea, a drummer for nearly 15 years, delivers organically, independent of loops or presets. De Marrais and company visited San Juan in 2015, headlining a lineup that included both Mau Lynx and Furry Vowels, a project helmed by Los Wálters player Ferdy Ariel; they often team up for song-sharing sets. (They play together in DOGOS too, along with Derick Joel of Labajura and Jorge Pérez of Las Abejas.)

“I fed you gold/While I drank the poison,” Alicea breathes ahead of de Marrais, who echoes the lament of lying to protect someone else, and harming yourself as a result. But the delicately winding piano finale feels like closure; we move on, and the title track that follows guides the mind into leisurely overthinking on a night out.

“It’s basically the time in between where you’re going. You start thinking about what am I doing? Who am I going to see? What’s tonight going to be like? Am I going to go to sleep? Is somebody going to get in my car?” Alicea trails off.

When you’re contemplating your own life so intimately, even the day-to-day minutiae can feel symbolic. Pseudo-profundities they may seem, but sometimes the analyzing of trivialities ultimately leads to greater clarity of mind.

“Every song has a little piece of me, and obviously I don’t know myself completely even now, after writing the album,” he says. “But it was a good psychology treatment.”

On “Only You,” however, the story isn’t a personal one. Foreboding synths introduce a tale of one-sided emotional obsession that Alicea points out is “not a healthy type of engagement at all.” The lyrics were co-written with Rosamalia Pérez, a local electronic DJ who’s mid-breakout stride after a set at We the Future festival in March. The pair was already well-acquainted as fellow musicians: Years ago they almost formed a band, and while that didn’t pan out, the rehearsal time they clocked (about six months’ worth) laid solid rapport groundwork for this collab.

Closing track “Girl” marks the third guest appearance, this one from Lust Era singer David Arraya, with whom Alicea also has an established dynamic. But it’s really that personal journey that pried open the doors to new influences, and to a newfound extent. Alicea even entrusted another person with the mixing and mastering of Next Year — a first for Mau Lynx.

“When I mastered my other tracks, I’d just be too hard on myself and never be completely happy with what the outcome was,” he says. “You can get more juice out of your songs if you take it to somebody else with more experience. If I wanted to do something very professional, I just had to take it to somebody else’s studio to get the most out of my track.”

His close friend Jay Rochet took charge at his Guaynabo studio, Rochet Productions, where he co-produced, mixed, and mastered each track. Alicea was able to recognize where he was lacking, and rather than feel diminished by that, he was empowered to ask for the creative assistance he needed.

Next Year is a marked, shining step forward for Mau Lynx, one that couldn’t have happened without Alicea allowing space for new voices. A sturdier sense of self can make clearer that adding an outsider’s perspective doesn’t depreciate your own, but instead can be the gateway to realizing the end result you’d hoped for all along. 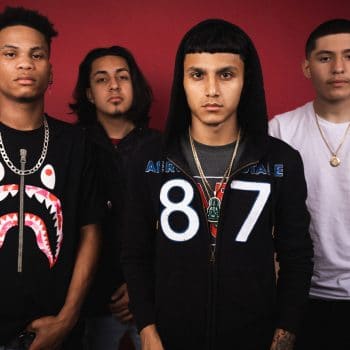