As the daughter of undocumented immigrants, 23-year-old Doris Munoz watched in terror as the Trump administration ramped up deportation efforts and spread anti-immigrant rhetoric across the country. Fearing the worst, she took it upon herself earlier this year to to sponsor her undocumented mother’s visa petition. But one massive hurdle almost hindered the entire process: the bloated price tag on legal status.

Munoz quickly learned that in order to even begin considering a green card, undocumented folks have to pay visa petition fees that can cost thousands of dollars. Munoz’s family had to cobble together over $3,300 to file their petition and their application to register permanent residence. Undocumented families have to prepare for other potential fees and fines, not to mention legal bills that could range in the thousands.

For people like Munoz’s mother, who does janitorial and sales work, these prices were non-starters.

“When our parents can barely afford to take a day off of work to go to the lawyer’s office, how are they even going to pay that lawyer?” Munoz told Remezcla in an interview.

Munoz, who works in music management in Los Angeles, realized she’d need some help, and fast. She reached out to her friends in the industry, and they helped her come up with Solidarity for Sanctuary, a concert benefit series that rallied members of the Latinx community behind Munoz and her parents. The first event sold out the 350-person capacity Hi Hat club in LA and ended up raising significant funds to help Munoz’s mother.

This Friday, Munoz is following the success of the first Solidarity for Sanctuary party with a second iteration. She’s calling it Selena for Sanctuary, and it’ll be a massive, Selena-themed dance party featuring DJ sets from Cuco, Ricky Reed of Nice Life Records, and members of music & arts collective Honey Power Club, with tribute performances from August Eve and more. In addition to the performances, organizers created a special zine to accompany the event, as well as a silent auction and a raffle giveaway with prizes. Munoz hopes to use the proceeds to round out her mother’s legal fees and start the process for her undocumented father. She’s also working with local groups to help identify other families in need who could benefit.

In a country that continually threatens Latinx and undocumented communities, Solidarity for Sanctuary provides more than just community support. The event offers a safe and creative space for people working through the anxieties and trauma of deportation. Munoz laughs when she talks about how people can hit up the Selena-themed party, dance, and live out their fantasies, but she also understands how important a relaxing environment is for undocumented immigrants and their children, who “feel nervous every single day.”

She knows firsthand that deportation can rip families apart. When her older brother’s DACA petition was being processed in 2015, he was surprised with an open order of deportation in the middle of a regularly scheduled visit at the immigration office. He was detained, put in handcuffs, and sent to Mexico, a country that he hadn’t stepped foot in since he was two years old. He left behind his wife and three young daughters.

“I think in the Donald Trump era, we’re sometimes afraid of who we’re talking to, and having a brown body, you can feel like a target,” Munoz said. “To be in a safe space like this, surrounded by people who believe in fighting for your community with you, is really beautiful.”

One of Friday’s performers will be LA-based synth artist Cuco, who was on hand at the last concert (Munoz says her mother became a huge fan of his. She attended the concert briefly with her husband before they headed to their night shift cleaning an ice cream shop). Cuco told Remezcla that he wanted to lend his voice at Solidarity for Sanctuary because it embodies the experience of so many Latinx families, including his own. “Seeing how much hate is being aimed towards immigrant communities by this administration and how little resources there are to help my own people, it’s unfortunate,” he said. “I think it’s super important for us as Latinxs to come together, be visible and speak up and start providing necessary resources for our own people.”

August Eve said benefits like these are important because they give communities a voice, and help clear up misconceptions about undocumented folks. “Many immigrant families often work seven days a week, some are forced to fit an entire family in a one-bedroom apartment, and they are able to make it work without complaining. When you grow up around people who sacrifice so much to live like that, it’s impossible to not feel heartbroken by our current administration’s stance on immigration,” she said.

Both August Eve and Cuco are readying their best Selena-themed performances for Friday. Munoz is already preparing future events: Her friends have come to her with ideas for art shows and gallery nights. She hopes Solidarity for Sanctuary will be a model for Latinx activists. “Our parents are always trying to be superheroes and making sure we’re taken care of,” she said. “With events like these, we can help take care of them.”

Update, 5/11/2017, 5:50 p.m.: This post has been updated to clarify the cost of visa petition fees and elaborate on Munoz’s older brother’s deportation.

Selena for Sanctuary takes place at Los Angeles’ The Satellite on Friday, May 12 from 9 p.m. to 2 a.m. For more information, head over to the Facebook event. Online donations are also being accepted here. 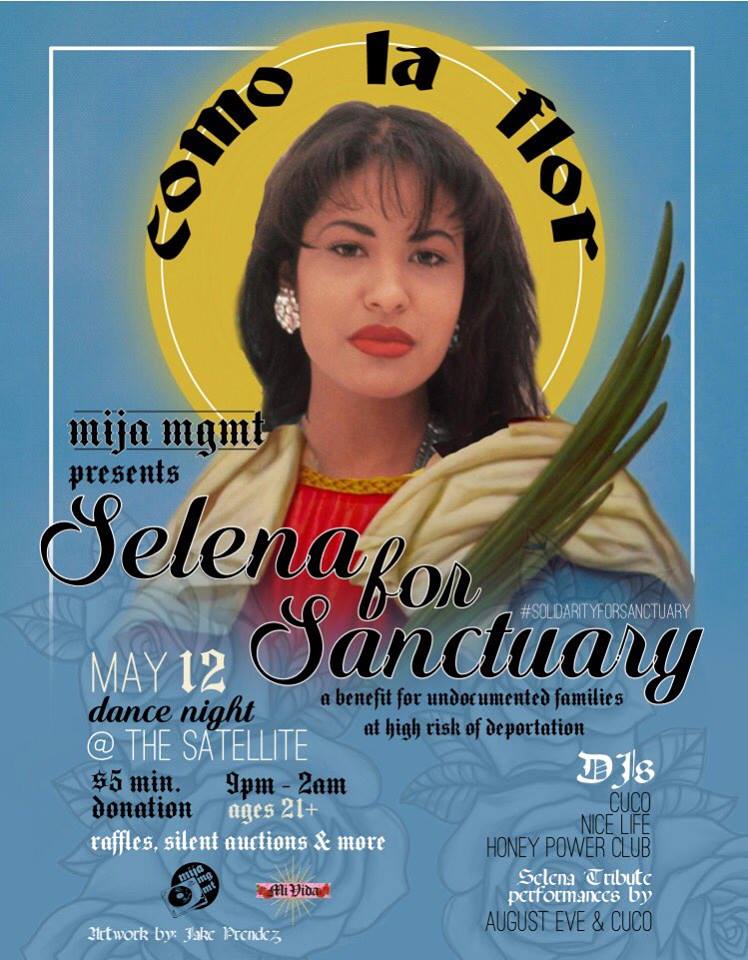