10 Years After His Own “Goal of the Century,” Lionel Messi Still Can’t Escape Maradona’s Shadow

Ten years ago, on April 18, 2007, Lionel Messi took the ball at midfield, ran past five Getafe players, and scored around a sixth, cementing his place as Argentina’s next demigod futbolero. Like so many before him–I still believe in you, Riquelme–Messi became the latest “Next Maradona” with that goal, so similar to Diego’s “Goal of the Century” that it seemed as if the soul of Argentinian soccer had moved from one diminutive lefty to the next.

And yet, in terms of the pressure he would feel from his homeland following both this Getafe “Goal of the Century” and his cheeky replica of Maradona’s Hand of God goal, the worst thing for Messi was to be labeled as the “next” anyone. As we know now, ten years after what can be considered his true arrival on the world stage, Lionel is just the First Messi. Yet, by virtue of being the leader of a new Argentinian generation, the pressures and hopes of World Cup glory have rested on his small frame since before he had scored a single goal for the Albiceleste.

If Messi doesn’t win the World Cup with Argentina in 2018–that is, if Argentina even qualifies for the tournament; they’re precariously close to missing out– he will most likely retire without a single international trophy for his country. (He did win the Olympic gold medal in 2008, however.) Never mind the fact that he dragged Argentina to three straight international finals (2014 World Cup, 2015 and 2016 Copa America), or the fact that he would be a World Cup champion if Gonzalo Higuaín and/or Rodrigo Palacio could score a grade-school goal in the final against Germany. For Argentina, Messi’s lack of glory will be seen as line 1A on his legacy’s story.

Messi’s supposed lack of success with his home country, when so many countries would worship at the feet of a man with his resume, stings his countrymen’s egos all the more because he has been so ridiculously and extravagantly successful while wearing the blaugrana of Barcelona. He’s won everything with the club that you can win–sometimes obscenely so; he’s won three Champions League trophies and has completed two trebles. No club other than this era’s Barcelona has accomplished that feat, which puts his lack of silverware at the international level into stark contrast. That success, as well as Messi’s well-established love for the Catalan city, has led some to say that Messi does not take pride in his Argentinian heritage and in wearing the country’s kit and captain’s armband. 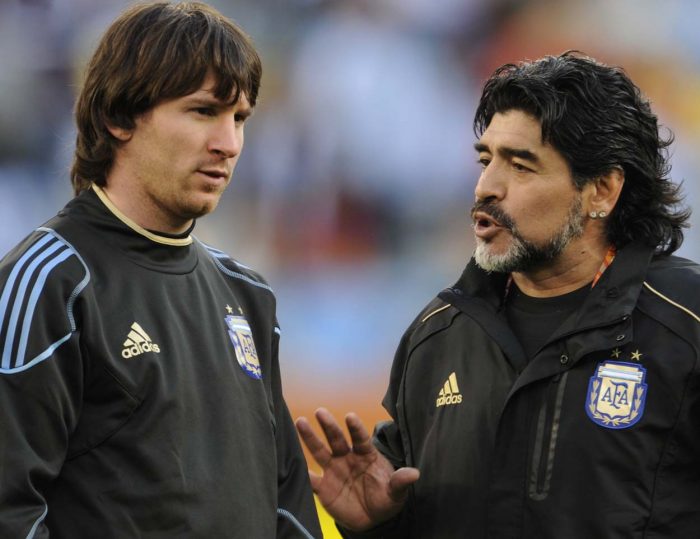 Even the argument most parroted by Messi supporters is parried back by Maradona disciples; sure, Messi’s Argentina teammates let him down, but it’s not like Maradona’s were much better. While not incorrect–Maradona’s 1986 performance is one of the greatest solo showings of all time–it ignores the change in eras and the developments of soccer as a sport in the decades since. Plainly put, there are more good soccer players in the world now than ever before, ranging from smaller countries like Peru and Switzerland to traditional powerhouses like Spain and Germany. It’s fair to say that in today’s era of meticulous diets, grueling workouts, and the continuing arms race that is club soccer, the quality of play, and therefore the degree of difficulty for any single player in pursuit of glory, has skyrocketed.

It’s the Germans that best exemplify this trend: in the World Cups of 2006, 2010, and 2014, it was Die Mannschaft that eliminated Argentina, in three differing manners. In 2006, the host nation defeated the Albiceleste in penalties, in a game where Argentina manager José Pékerman benched Messi. In 2010, Germany’s cohesion as a team steamrolled the Argentines, with Messi not getting a chance to do much while his country’s subpar defense was run ragged. And in 2014, the aforementioned Higuaín and Palacio left the door open for Mario Götze, one of the symbols of Germany’s new generation, who slotted home the tournament winner in extra time.

Maradona supporters will point to Messi’s inability to carry Argentina past the Germans in those three games, but taking a deeper look at each shows that Messi couldn’t have done much more. He just ran into an efficient buzzsaw, one that finished 3rd or better at all three tournaments (and finished as finalists in 2002, albeit with a different set of players).

Does that make Messi’s 2014 performance, where he won the Golden Ball as the best player of the competition, any less impressive than Maradona’s? Mind you, in the 1986 final, Argentina faced none other than (West) Germany, and won by the score of 3 to 2.