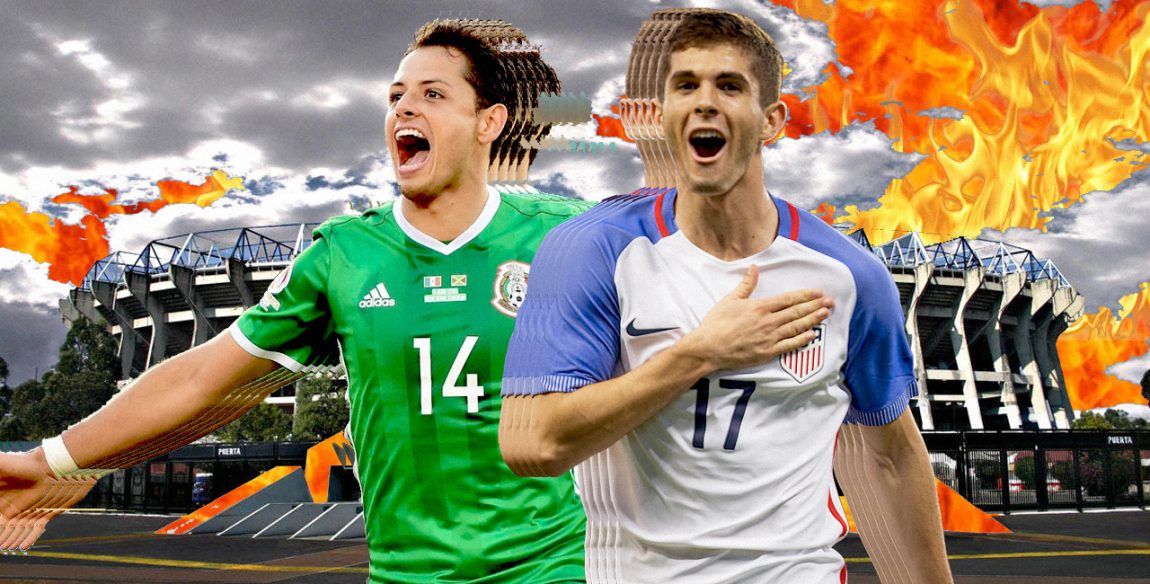 CONCACAF World Cup qualifying is a long process, grueling and repetitive, and ultimately, it boils down to the same old protagonists every single time. Yes, Mexico and the US have generally run roughshod over the region, with minor stumbles being overshadowed by general competence and efficiency in booking tickets for World Cups. And if you were to look at the Hexagonal table for 2018 Russia, you’d see much of the same: Mexico undefeated at the top, with the US recovering from a couple of bad losses to assert dominance and climb back up the table to its rightful top 2 spot, Costa Rica be damned.

However, the momentum built by the USMNT since firing Jurgen Klinsmann and replacing him with steady hand Bruce Arena could be on the line on Sunday, as the red-white-and-blue travels to its personal nightmare to face off with El Tri at  Estadio Azteca. Quick: when was the last time the US won there in World Cup qualifying? If you guessed never, congratulations, you also probably know the sky is blue. (The US did win a friendly at Azteca in 2012, but that’s neither here nor there.)

With all that in mind, this is one of the rare Azteca clashes that clearly means more to one team than the other. There’s a lot at stake for both, of course, but one team is cruising to Russia, while the other is getting over institutional crises and shoddy performances–one Dortmund teenager aside–on the way to what will be a nervy last handful of Hex games.

Let’s start with Mexico, whose goals are simple: win at the impenetrable fortress Azteca, and El Tri can start packing their bags and learning basic Russian, because it’ll be hard for them miss out on the 2018 World Cup. After crushing poor Honduras 3-0 on Thursday, Mexico has pulled in an impressive 13 points out of a total 15; their only “stumble,” if you can call it that, was a 0-0 draw away against current fourth-place Panama. Not particularly embarrassing.

Behind a well-balanced side that is getting goals from everyone, El Tri has been impossible to stop this time around. Their most impressive win to date, a 2-0 drubbing of Costa Rica that wasn’t really as close as the scoreline suggests, saw Chicharito Hernández tie the record for most all-time goals for Mexico, notching his 46th goal and drawing even with Jared Borgetti. A win against the United States would cement their spot at the top of the group, with only near-impossible catastrophe standing between them and Russia. Even a draw would help them keep pace and sit proudly at the top of the Hex with 4 games to go.

For the United States, it’s a bit more complicated. Winning at Azteca is nigh impossible, but after firing Jurgen Klinsmann, the ol’ Stars and Stripes has been firing on all cylinders, and even rescuing a point from their toughest Hex fixture would help them recover from their poor star. It doesn’t hurt that their biggest competition, Costa Rica and Panama, drew on Thursday night, while the US rode the coattails of Christian Pulisic (get used to this and this, CONCACAF fans) to a 2-0 win over Trinidad and Tobago. They’re still in third behind the Ticos, but sit only one point back at the half-way point of the Hex.

Speaking of Pulisic, the best American talent ever and already one of its best players, period, the young do-it-all midfielder came out after his side’s win on Thursday to claim that the USMNT will march into the Azteca and walk out with the full 3 points. While the “America!!!” crowd will love his confidence, and while his talent can single-handedly win games against even the best teams, Pulisic would do well to settle into the game and help his side pick up any points possible. However, if the Hershey, Pennsylvania native leads the US to its first qualifying win in Mexico’s deathtrap of a stadium, you might as well start forgetting about Landon Donovan. Pulisic will stand alone, and deservedly so.

Oh, and what he said afterwards was pretty interesting, too. https://t.co/j22zCfu2cf

So, while Mexico is undefeated and playing at their best stadium, the US is probably more desperate for points. Normally, the team playing with more to lose can come out with extra motivation, but this is US-Mexico. No extra motivation is ever needed, and the usual lax attitudes from teams almost qualified won’t apply to El Tri on Sunday. As if a spot at the World Cup wasn’t enough, and as if the increasing geopolitical tensions between both countries weren’t enough–hi, Vicente Fox, thanks for throwing gasoline on the fire– this also serves as a warm-up for this summer’s Gold Cup, which will see the US trying to get over their embarrassing fourth place finish in 2015.

Sunday isn’t the end-all-be-all for either side, but the winner, if there is one, would be set up pretty as we enter the homestretch of qualifying. A draw isn’t either country’s ideal scenario, but it would also leave them both in a good position to automatically qualify for Russia. Any chance of a hesitant game where both teams attempt not to lose goes out the window, however, because this is CONCACAF’s most bitter rivalry. Mexico will never pass up an opportunity to bury its northern neighbors in a barrage of goals, and the US won’t forget their last-second defeat at the hands of El Tri in the 2015 CONCACAF Cup. Estadio Azteca will be bumping with almost 100,000 rabid Mexican fans, and the action on the field should match their passion tenfold.

Can it be Sunday yet?