The Secret History of Women’s Soccer in Mexico and Its Unsung Heroine, La Pelé Vargas

Long before there was Abby Wambach or Maribel Domínguez, Alex Morgan, Charlyn Corral, or Marta, there was Alicia La Pelé Vargas.

For a fleeting moment, before FIFA recognized the existence of women’s soccer, the Mexican women’s national team was a world power. Organized by volunteers in the Mexican Association of Women’s Football (AMFF) and discouraged by the official FMF, the women went to the inaugural women’s championship in 1970 in Italy. Shocking everyone—including themselves—el Tri Femenil finished third. The following year, Mexico hosted the second women’s championship. Over 100,000 people packed into the Estadio Azteca to see the Mexico lose to Denmark 3-0 in the finals.

The origins of women’s soccer in Mexico are somewhat obscured. It seems likely that women began playing soccer in the 1950s, and that it gained impetus and popularity in 1963 after a tour by two Costa Rican teams. By 1969, the Liga América held Mexico’s first women’s championship, boasting 17 teams in and around Mexico City. Teams played 60-minute games on public fields that were little more than dirt and rock, and had no support to speak of from Mexico’s soccer institutions. Instead, interest grew rapidly by word of mouth and volunteer activity, and by 1970 the AMFF formed to oversee the sport.

During the 1970 championship few people noticed the women’s team at all. Scant media coverage of the team—only el Heraldo de Mexico sent a representative to Italy—meant that most Mexicans were unaware of the event at all.  By 1971, however, Mexico awoke to the potential of women’s soccer.

And the undisputed star of the Mexican women’s team—and Latin American women’s soccer—was Alicia Vargas, aka La Pelé. Born in 1954, Vargas began playing as a youth with her brothers and other boys in the street. Against the wishes of her parents, Vargas continued to play, often punished and sometimes dragged from games by her ears. Still, playing in the streets gave her great touch with both feet, a skill which she used either to dribble around opponents (a la her favorite player, Garrincha), to lay passes off to her teammates, or to unleash a powerful shot.

According to Maritza Carreño, Vargas initially had difficulty finding a team with which to play since she was out of shape. However, she talked her way onto the pitch during a game, and in eight minutes had shown enough of her skill that Guadalajara asked her to join the team. Her skill quickly caught the attention of the Mexican national team coaches—volunteers from the AMFF. And before the end of el Tri Femenil’s trip to Italy in 1970, European coaches had taken notice. Real Torino offered La Pelé a contract to stay in Italy, at the young age of 16. She turned down the offer then, claiming that she preferred Mexico.

In 1971, after el Tri Femenil defeated England 4-0 in front of approximately 80,000 people at the Estadio Azteca, Real Torino again offered her the opportunity to play in Italy. This offer would be harder to turn down: nearly 100,000 pesos for four months, with housing included. Still, she decided to remain in Mexico with her family. Already over 20,000 women played the sport around the country; the future for women’s soccer in Mexico looked bright.

That future never came to pass. Despite the success of the women’s team in 1970 and 1971, and the creation of a national league with teams from 16 states in 1972, conflicts with management and between the women’s league and the FMF meant that the sport quickly receded into the background. Still, girls and women—including Alicia Vargas—continued to play in the “liga de la Cabeza de Juárez,” playing on a “dirt and rock filled field…for years,” and relying on volunteer support and word of mouth.[ii]  And this is how the sport survived in Mexico until FIFA moved from suppressing women’s soccer to supporting it. 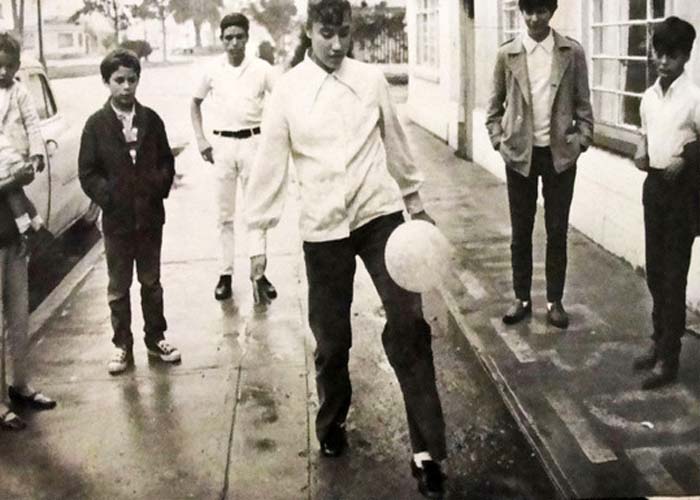 By that time it was too late for La Pelé. When Mexico organized a team for the qualifiers for the first “official” Women’s World Cup in 1991, Vargas was 37 years old. Still she made the cut. She recognized that her speed and agility were no longer what they were, but thought that she could bring leadership to the team. Mexico finished third in its group, losing to the United States and Trinidad and Tobago. Vargas’ international career was over.

As a pioneer in women’s soccer in Mexico, Vargas made it farther than many others. She competed in two world championships, and received contract offers to play in Italy, long before it was commonplace. And though she played most of her career in relative obscurity, her skill was broadly recognized: in 1999 CONCACAF named Alicia Vargas the third best woman player of the century, tied with Julie Foudy of the United States.

Unfortunately, however, in Mexico Vargas and her teammates have largely been forgotten. While the Mexican women’s team now receives official support, women’s soccer still is hardly a priority for the FMF. Worse, FIFA fails to acknowledge the two championships of 1970-1971, since they were not organized by affiliated federations.

Thus Vargas’ play exists between worlds; she is one of the best players in Mexican history, but her career came too early.