Vos vs. Tú: 4 Central Americans on Proudly Reclaiming Voseo in the United States

If you’ve been around a few Central Americans you’ve probably heard something along the lines of “¿Tenés hambre vos? ¡Vení para acá vos! Vos sos viejo.” Vos is the less-popular sibling of the second person pronoun tú. When thinking of lands in which voseo (the use of vos) reigns supreme, people usually think of Argentina or Uruguay. However, before tuteo (the use of tú) came around, voseo was the standard usage in the entire Spanish-speaking world during the early years of the colonial era. When vos fell into disuse in 16th century Spain, most of Latin America followed suit. Places that were more isolated from the Spanish crown, like the Central American isthmus, carried on voseando.

Spanish-Speakers’ Citrus Struggle: The Confusing Debate Over How to Say Lemon/Lime en Español

Voseo is still spoken in many Latin American countries to varying degrees, but in most cases, it takes a back seat to tuteo in terms of usage. In fact, there was a centuries-long international conspiracy in the hispanosphere to rid the world of this seemingly arbitrary pronoun. Andrés Bello – 19th century Venezuelan humanist and the face of the 20,000 Chilean peso – called it a “vulgarity that should be avoided” and an “insupportable corruption.” But what did voseo ever do to him? 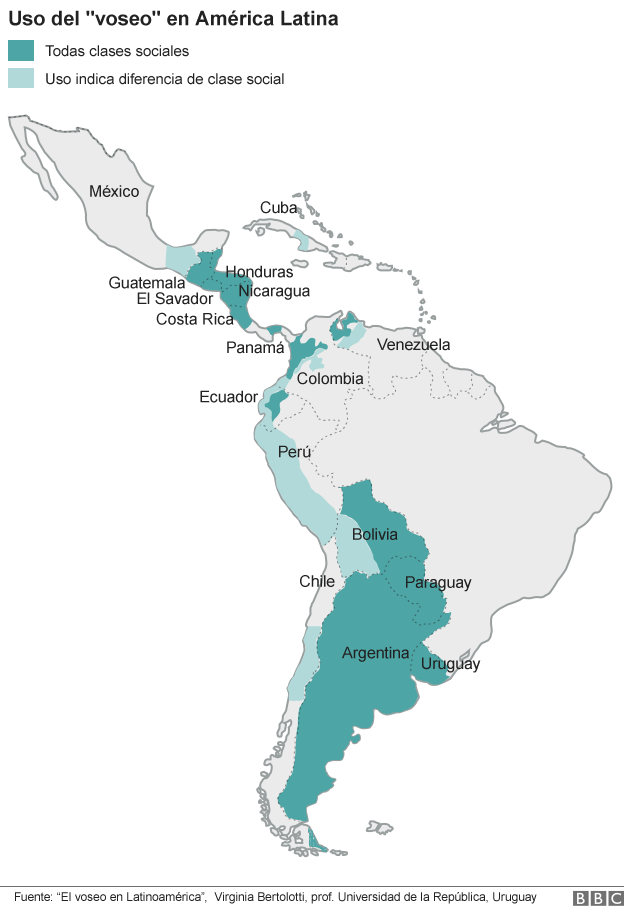 Nowhere is the tension between vos and tú more alive than, of all places, Southern California. The Los Angeles metropolitan area is home to the largest population of Mexicans, Salvadorans, and Guatemalans in the United States, as well as the second largest home to Hondurans and Nicaraguans in the country. It’s a Mesoamerican party where Mexicans dwarf the Central American population by making up 79% of the Latinx population, according to the Pew Hispanic Center. Naturally this makes Mexican Spanish with its tuteo the unofficial standard, and voseo a strong marker of Central American otherness.

Growing up near LA, I was never taught voseo. In fact, my parents prided themselves in teaching me tuteo because it meant their child grew up speaking “proper” Spanish. And it meant I would fit in easier with my Mexican-American neighbors. To my family, speaking Mexican Spanish started on the perilous journey crossing through Mexico as a way to shield themselves from potential xenophobic violence. As Mexico deports a record number of Central Americans, the same is likely true today.

Today, if you were to open a Spanish textbook in the United States or Central America, you’d likely find a section on vosotros, the plural second person pronoun from Spain, but nothing on voseo. Most of the resources on how to conjugate in voseo are limited to Argentina and Uruguay, who take great pride in it.

The tide is turning, however. In 2005 the royal authority on the Spanish language Real Academia Española recognized voseo in their Diccionario Panhispánico de Dudas. In 2014, Costa Rica’s Ministry of Public Education proposed a campaign to promote voseo to preserve their national identity –  it would be a first for the region.

If you’re like me and you’re still unsure of which one to use, vos or tú, then there’s still a safe third option—usted.

But I’ve since reclaimed my linguistic heritage by using voseo more, and I’m not the only one doing so. I wanted to know more about this internal struggle that many Central Americans have, so I picked the brains of four experts:

On Growing up on both sides of the divide:

“Growing up as a Salvadoran-Mexican I was only exposed to voseo when I heard my mother’s side of the family having conversations with each other. If my mom was on the phone and said, “¡Olvidálo (emphasis on the a) vos!” I knew she was talking to family. So to me, the voseo was personal; it was private and it was for family. Mexican Spanish was for business, for dealing with school authorities, and for the impersonal. When I went to college, I found myself lacking the knowledge of the voseo and sometimes felt inauthentic in both Mexican and Central American spaces because my Mexican Spanish was dotted with voseo, but my use of the voseo was not always accurate.”

“Second-generation Salvadorans’ affinities to the voseo practice indicate a type of grouping mechanism that is needed in order for this group to locate itself within the Latina/o milieu of Southern California.”

Professor of Chicana and Chicano Studies at UCLA, Salvadoran

The lingering effects of the voseo stigma:

“The Central American Spanish that I grew up with was so marginalized, stigmatized, that I still have a visceral gut reaction to not use it in spaces of mixed Spanish-speakers. And on the other hand if I do hear voseo and I feel comfortable, it’s like an immediate connection to people, an affirmation of space.”

On exposing her children to voseo:

“If I don’t use it, they’re not going to hear it anywhere else, not from their teachers, the radio, or television.”

My kids are already better Central American Spanish speakers with these paintings around! #winning pic.twitter.com/RjcADraCZr

Voseo as a form of reclaiming power:

“As a strategy of cultural recuperation, the use of voseo entails adopting certain speech habits that are linked to the popular in their countries of origin, a kind of streetspeak that asserts a class politics in relation to the ‘more educated’ classes in those countries that opt for a more formal, academic Spanish. Since most of the displaced people who’ve migrated to the U.S. hail from the popular classes, it corresponds that the use of voseo has emerged as a strategy to deliberately assert a kind of cultural autonomy.”

PhD Candidate in Hispanic Linguistics at the University of New Mexico, Lived in Honduras and married to a Nicaraguan.

On using tú as an ethnolinguistic mask:

“Voseo acts as a distinguishing feature of Salvadoran and Honduran Spanish, one that allows Central Americans in the United States to establish a sense of solidarity. But it may also be suppressed to achieve out-group recognition from the Mexican-American community.”

[From his paper El tú como un “mask : Voseo and Salvadoran and Honduran Identity in the United States.]