By Remezcla Estaff
09.17.18 at 5:54 pm
Lead Photo: A shopper leaves a supermarket with flour and eggs after waiting for hours for scarce foodstuffs on March 2, 2014 in Caracas, Venezuela. Photo by John Moore/Getty Images

In Venezuela, food scarcity has become the norm. As a matter of fact, in 2017, people lost an average of 24 pounds because food was hard for many to find. As the economic and political crisis continues in the South American country, people have migrated to nearby countries, the United States, and overseas. But as the country’s citizens suffer, President Nicolás Maduro does not. In an Instagram post from today, Maduro is seen patronizing Nusr-Et Sandal Bedesteni, the expensive Istanbul restaurant of Nusret Gökçe, aka Salt Bae.

Nusret, who is wearing shades, hams it up for the cameras. As he cuts into a piece of meat, the chef – who also wears a low-cut V-neck and slicked back hair – sways his hips back and forth. In a follow-up video, Salt Bae gifts Maduro a branded T-shirt, prompting the president to throw up Nusret’s signature hand gesture – aka the one that made him a viral celebrity.

In the snippets of his time at the restaurant, it’s clear that for Maduro, eating is an enjoyable experience – even a spectacle. He chose to go into the restaurant of a famous chef – one who uses social media as a way to promote himself – so it’s hard not to take the dining option as a big eff you to his people. 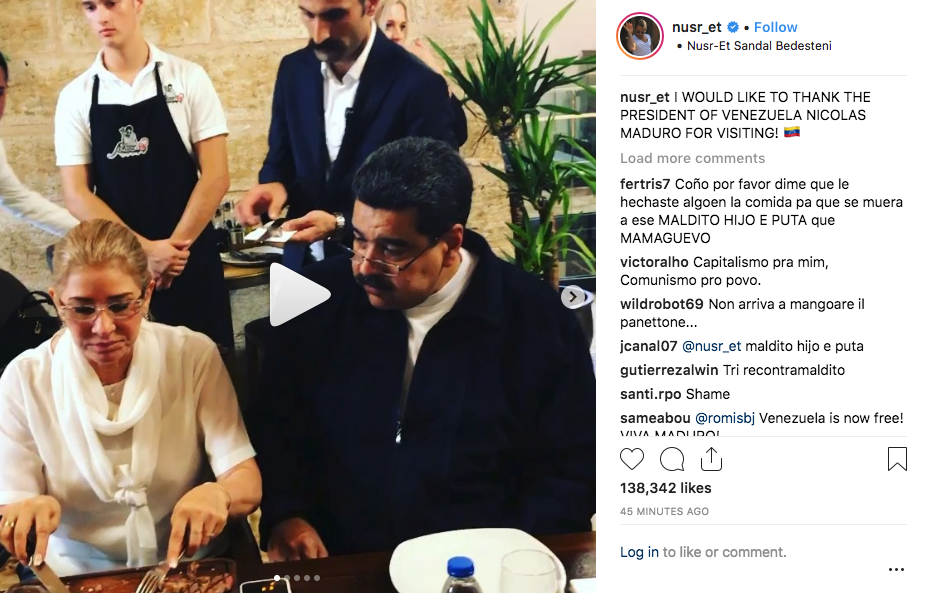 Salt Bae has since removed the post (but he should know the internet is forever and people have receipts) after receiving backlash. Check out a few reactions below.

I think this may be the closest depiction to the dinner between the pigs and humans from Annimal Farm to date. Nicholas Maduro of course being Napoleon and Salt Bae is Mr. Pilkington https://t.co/0AFs6uIOuY

Ummm why is Venezuela’s President Maduro eating steak at Salt Bae’s restaurant in Turkey while his people are literally starving to death? It seems really out of touch. pic.twitter.com/zOmWHIE7jV

Maduro is really a peace of shit.
He is eating big time beef and thing with that salt bae dude and meanwhile Venezuela is crumbling