What to do at Mexico City’s Festival Marvin this Week

Of all of Mexico City’s festivals, Festival Marvin is the one that is most often compared to SXSW; like Austin’s annual takeover, the festival is spread out over various key spots in the most popular neighborhood of a capital city full of weirdos. The difference, of course, is that Mexico City is ginormous, and Festival Marvin is only four years old, so it hasn’t yet reached the behemoth status of Texas’ poster festival. But for those who have gotten disenchanted with South by’s more corporate brand-fest bent of late, Marvin may be a refreshing alternative. Like SXSW’s early roots, the festival focuses on indie and alt music scenes, showcasing mostly local talent, who share the stage with a handful of hand-picked international cult headliners, as well as national and global acts bubbling up from the underground.

This year, we teamed up with the newly beefed-up festival – which added more conferences, cinema, art, and 18 stand-up comedians to their line-up, in addition to the 50 bands. Here’s where you can catch us at Marvin this weekend.

We couldn’t help it, we really like throwing parties. This Saturday, we’ll have Álvaro Díaz kicking off our showcase at Salón Pata Negra – located right next to Condesa’s El Plaza. Also on the line-up will be Ashauri & Jiony‘s post-beatnik performance (for all the weird art project lovers), The Guadaloops‘ new urban Latin sounds, CLXSTA‘s esoteric rap, and Faded‘s SoCal vibez. Last, but most definitely not least, we’ll have Kap G playing his first gig in Mexico ever.

One thing tho, MAKE SURE YOU GET THERE AT 1 P.M. 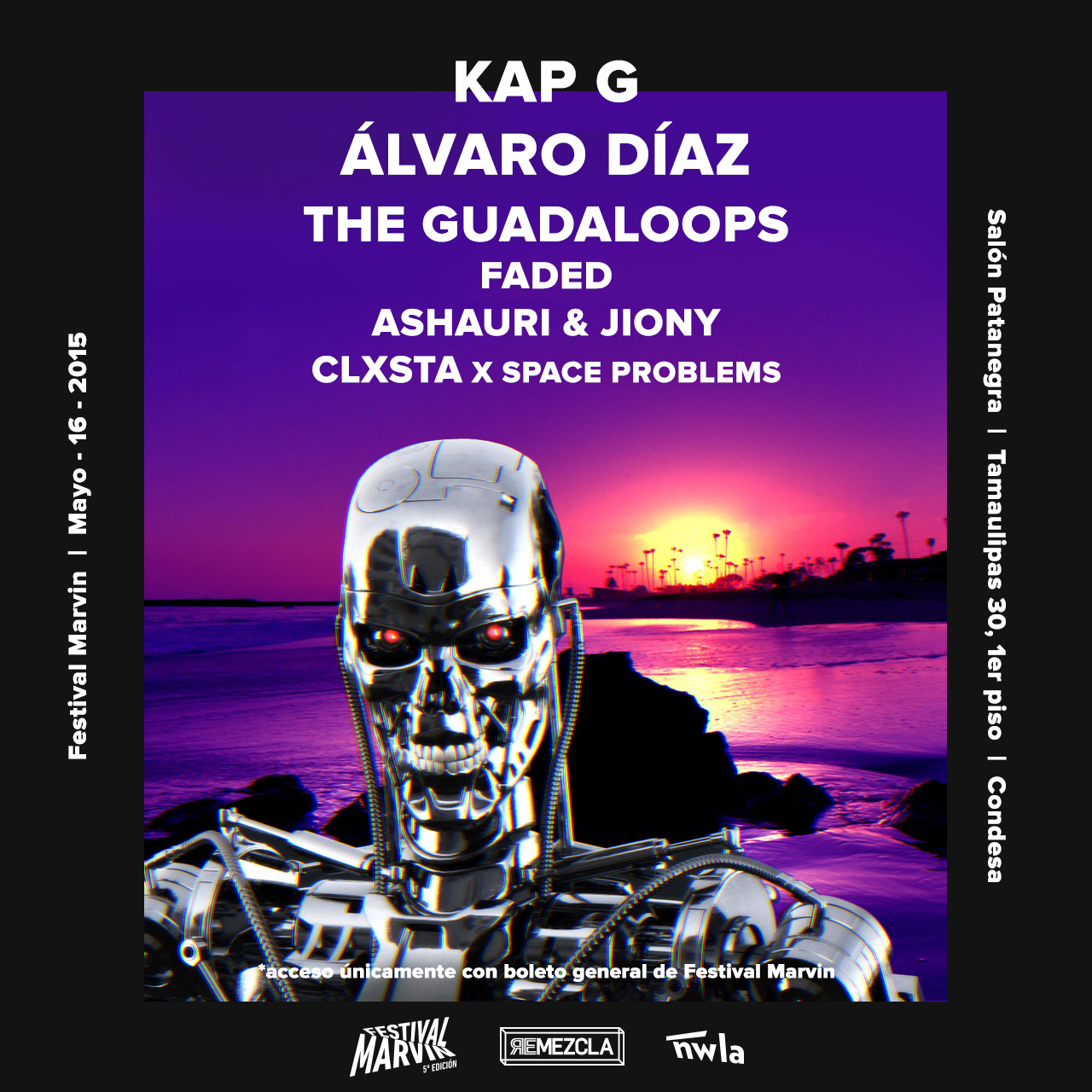 Here’s how to get there:

If you’re the panel type, check out our Creative Director and Head of Product Development Francisco Outon, who will be talking today about the Latino culture explosion that’s been unfolding on the internet over the last several years – including its influence, implications and future. Other talks will feature representatives from Arturia, The Guardian, and Pitchfork, as well as the people behind some of the bigger, more important festivals in Mexico.

If you want to take advantage of the whole experience that the festival offers, then don’t hesitate to drop by at any of these conferences, especially ours. More info here.

This year, there’s a Film component of the festival, which will include original Remezcla material. Among our contributions are Trilligan’s Island, a short doc on Puerto Rico’s emerging rap scene, as well as a first hand account of one of the most exciting games in Mexican football history, straight from the mouth of El Matador (El Partido De Mi Vida). Also featured will be our new series Hangin’, where we shoot the shit with brilliant artists like Buscabulla and Teen Flirt.

Along with documentaries about classic indie records by Pitchfork, original reporting from Noisey, and feature-length films presented by Mexican film fest Ambulante, it should make for one of Marvin’s highlights. Besides, you can just go ahead and chill at the film spots whenever you get tired of walking all over the place.

Check out all the screenings and their schedules here.

Even though Festival Marvin has always featured contemporary art in one way or another, this is the first time they’re going beyond an open public feature exhibit. This time around, Festival Marvin will focus a bit more on music photography and concert poster design, as well as other visual arts.

Be sure to catch pioneers Gonzalo Morales and Napoleon Habeica‘s work if you have a chance, as well as all of our Mercadorama family: Ciler, Kraken, Smithe, and Seher One.

Come by, you won’t regret it. Here’s all the info.

Here’s a video of that one time I interviewed some of the Mercadorama guys at SXSW:

While we had originally planned to include Remezcla’s own Cheky a.k.a. Algodón Egipcio, and long time friend, Sunsplash in our showcase, it was just very complicated to have all the fun in one single place. With that said, they’re two acts not to miss and we definitely think you should mark their shows on your schedule. You can do that on Festival Marvin’s website.