Celebrate the flags of Latin American and Caribbean nations in your music video — just make sure you’re flying them the right side up. Such is the demand of Bolivian hip-hop crew Cruz Santa, whose new song “La Bandera Ta Al Revés” captures the ire in their country over Anuel AA’s music video for his latest single “Reggaetonera.”

The video for “Reggaetonera,” featured on the Puerto Rican trapero’s Emmanuel album (released in May), is a maximalist, nationalist fever dream, locating dancers on a set built to look like the Puerto Rican flag, with different countries’ pennants waving every way you look. Elsewhere, the backup dancers’ bodies are painted to look like the flags themselves. The song is fine; no-fail reggaeton pop radio fodder. The problem is the video’s sloppy set design and editing. At around 0:57 seconds into the clip, the Bolivian flag gets its closeup. It’s fluttering upside down.

“Bolivia se respeta/Anotalo en tu libreta/Pensaste que mi gente se iba a quedar quieta?” a Cruz Santa emcee announces in the track, whose video is rapidly closing in on 400,000 views three days since its release. “La Bandera Ta Al Revés” was picked up by legions of Bolivian dancers (check the stories on Cruz Santa member Rafael Coronado’s Instagram account for inspired choreography) and YouTubers as soundtrack to their complaint.

The red, yellow, and green of the Bolivian flag signifies the country’s fallen soldiers, mining wealth, and fertile pampas. It’s often flown alongside the rainbow checkered Wiphala flag, which represents the nation’s indigenous communities. The Wiphala was recognized as the second official flag by President Evo Morales in 2009.

Anuel responded to Bolivia’s ire over the “Reggaetonera” misstep on his Instagram story feed on Tuesday. He posted a right side up image of their flag with this mea culpa: “Bolivia excuse me, I love you!!!!!!! It was a production error, WE DIDN’T REALIZE!!!!!!! My last concert was in BOLIVIA, THE LOVE THEY SHOWED ME WAS LEGENDARY!!!!!! LOVE AND RESPECT IS WHAT I HAVE FOR YOU.” 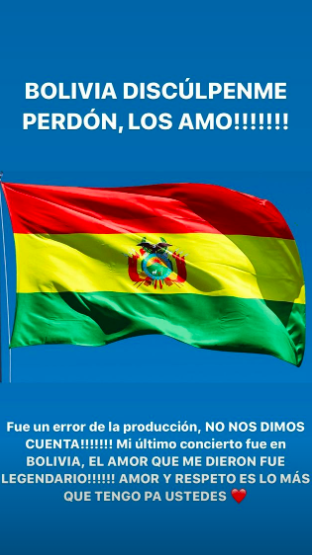