Dance and Donate to a Good Cause at APOCALIPSIS' Hurricane Harvey Fundraiser Tonight
Search
Music 08.31.17 at 2:02 pm

Efforts to help those affected by Hurricane Harvey in Texas’ Gulf region are going strong. If you’re in New York and looking for a way to do your part, Brooklyn-based label APOCALIPSIS has organized a function dedicated to raising funds for victims. The event’s massive lineup features Zuzuka Poderosa, moombathon pioneer Dave Nada, vogue artist Skyshaker, and Uproot Andy, who will be playing B2B with APOCALIPSIS founder Riobamba, among many more. Donations will be accepted at the door for the Greater Houston Community Foundation, the Houston Food Bank, and the Houston Coalition for the Homeless.

Hurricane Harvey has devastated the Gulf region of Texas, with 31 confirmed deaths as of yesterday and 30,000 displaced residents, including the 9,000 who are being sheltered in the Houston Convention Center. The situation has been especially perilous for undocumented immigrants (Houston is estimated to be home to 600,000), even though Houston Mayor Sylvester Turner’s reassured that he would represent anyone targeted for deportation during the hurricane’s aftermath.

For those who can’t attend tonight’s party, be on the lookout for local equivalents. Here’s a list of organizations who would be happy to accept your donations towards the well-being of those whose lives have been hurt by Harvey.

APOCALIPSIS’ Hurricane Harvey relief takes place tonight, August 31, at Brooklyn’s Mad Tropical from 9 p.m. to 3 a.m. For more info, head over to the Facebook event and check out the flyer below. 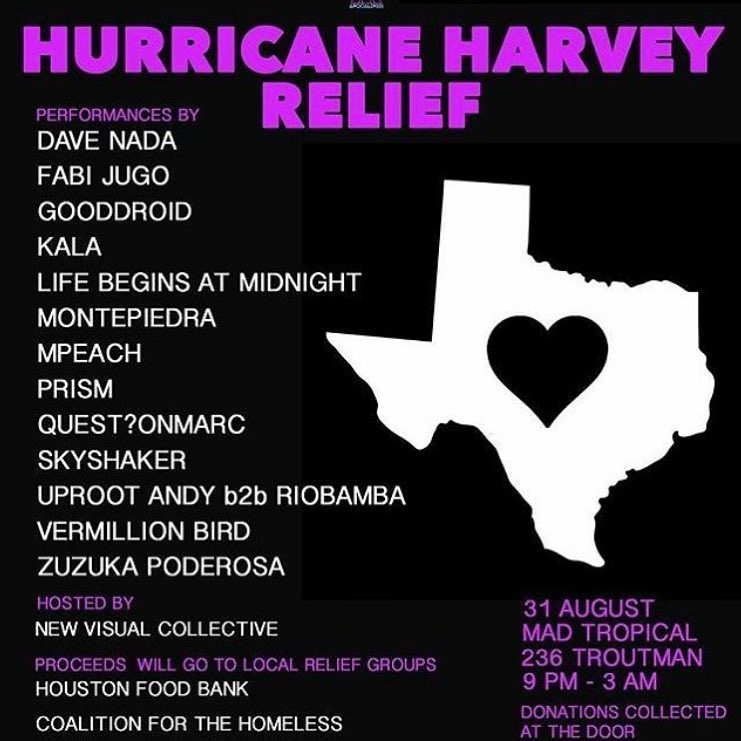