Promoter Speaks Out After Princess Nokia Accuses Him of Scam
Search
Music 08.24.17 at 2:45 pm

Princess Nokia was slated to make her Puerto Rico debut on August 17 and 18, a much-anticipated event for local fans of the New York-based Boricua. On August 1, the show promoters announced she had canceled the performances. According to a Facebook post, Nokia rescheduled to participate in an Urban Outfitters fashion campaign, and the shoot conflicted with the dates of her debut. 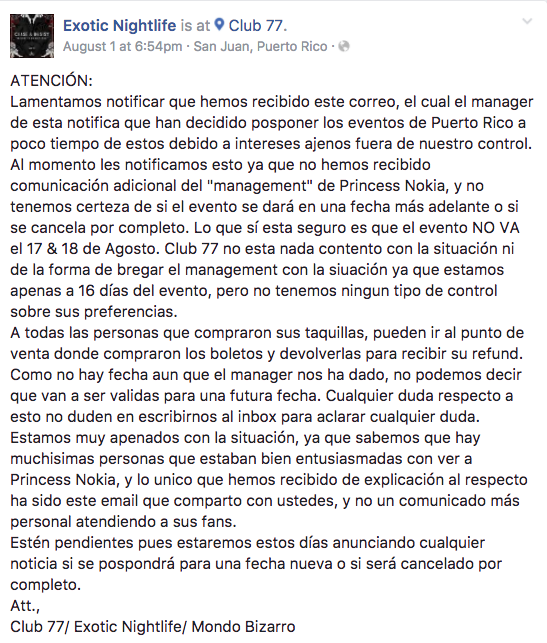 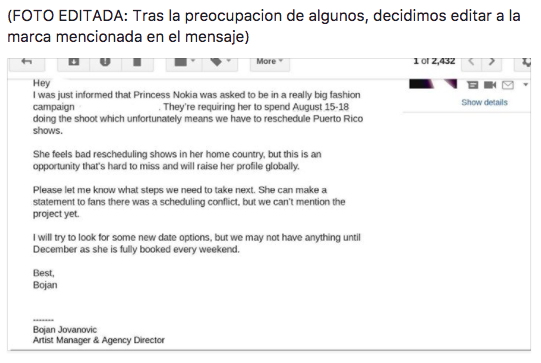 The Champion & Urban Outfitters campaign has since been revealed, and a show scheduled for August 17, the original date of her debut in Puerto Rico, has been announced.

In a series of tweets, Princess Nokia claimed the San Juan promoters were deceiving fans. “The promoter in Puerto Rico who arranged my tour dates was trying to scam,” she wrote. She also promised to clarify the situation soon.

ALSO I WILL ISSUSING A STATEMENT IN REGARD TO ME HAVING TO CANCEL MY SHOWS IN PUERTO RICO VERY SOON..

PUERTO RICO I LOVE YOU VERY MUCH, AND I APOLOGIZE FOR THE CONFUSION BUT YOU HAVE NO IDEA HOW MUCH THEY TRIED TO TAKE ADVATAGE OF US –

According to promoter Sebástian Castro, the dates at Club 77, a mid-size independent music venue, were never included in tour promo posted online, despite his requests to add them. Castro runs Exotic Nightlife, the company primarily responsible for booking the artist in Puerto Rico. After her tweets, plus contradictory posts by Castro via Exotic Nightlife, there’s still no public information that completely explains what happened. Remezcla reached out to Princess Nokia’s reps for comment, who explained she is expected to make a full statement via social media soon.

Princess Nokia has emphasized her Puerto Rican identity and her Taina heritage throughout her career. Castro stressed how important her visit would be right now, as Puerto Rico flails in its attempts to overcome its economic strife and the U.S. has elevated colonial authority, but he expressed concerns that she never got the message.

“From the beginning, I explained to Rogue [Princess Nokia’s management] the importance of her in our economic and social crisis, the importance to extend a solid bridge with the diaspora, but all this never got to her ears, I think,” he says.

According to Castro, Princess Nokia signed her contract for the Puerto Rico dates in April, and a guarantee was paid soon after. That’s since been returned, Castro says, but it took a few weeks, so the company had to refund tickets without it.

We will update this post as soon as more information becomes available.

Editor’s note: The author of this post is a former co-owner of Club 77, the venue Princess Nokia was slated to play in Puerto Rico. The author sold her shares in September.